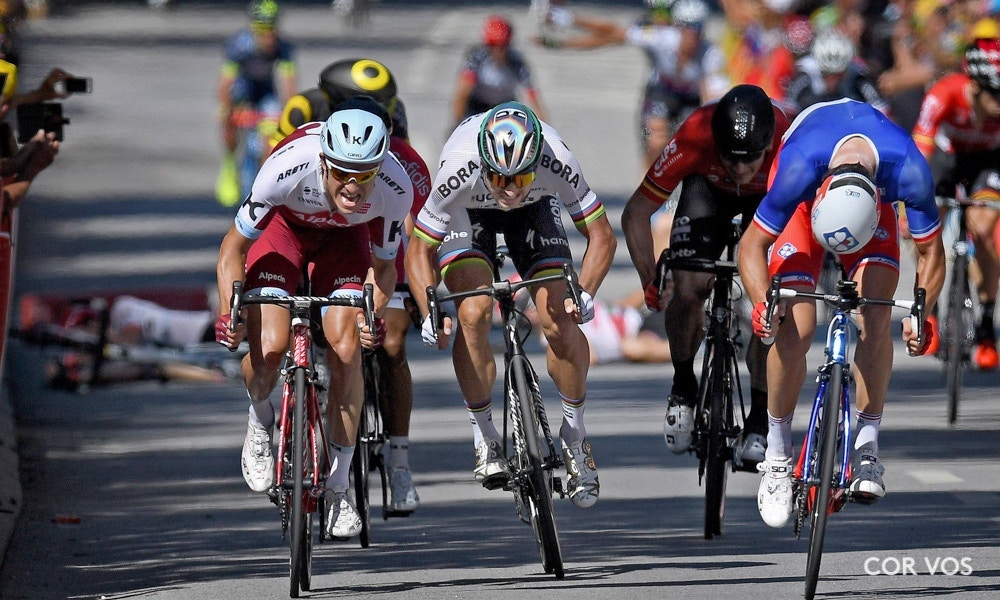 Arnaud Démare (FDJ) was victorious on the chaotic final of Stage 4 this afternoon in Vittel, France, finishing ahead of Peter Sagan (Bora-Hansgrohe) and Alexander Kristoff (Katusha-Alpecin).

The final two kilometers were met with heavy carnage, in contrast with a fairly benign stage prior with Guillaume van Keirsbulck (Wanty Groupe-Gobert) solo for the entirety of the day. Sagan was later disqualified for causing a crash that sent Mark Cavendish (Dimension Data), John Degenkolb (Trek-Segafredo), and Ben Swift (UAE Team Emirates) to the tarmac.

“Everyone dreams to win a Tour de France stage,” Démare said. “I rate it as high as winning Milan-Sanremo but for the general public who only knows the Tour de France, it’s an enormous win I got today.”

With just over a kilometer remaining in the race, several riders met the tarmac, including the yellow jersey of Geraint Thomas (Team Sky), as the final positioning battle began to heat up. Thomas, along with the other victims of the crash, wouldn’t lose any time as the incident happened within three kilometers of the finish.

The day’s events weren’t finished with Thomas’ crash. Instead, there would be chaos and controversy in the final sprint for the line.

Coming into the final 600 meters, because the peloton was considerably thinned out from the previous crash, it looked to be a relatively safe affair.

That wouldn’t be the reality, however, as Sagan and Cavendish tangled at 200 meters out.

As they opened up their final sprint, Sagan moved to the right, forcing Cavendish to move toward the right side of the road. Cavendish, on Sagan’s inside, attempted to come through the gap between the world champion and the barrier on his right. The Dimension Data rider wouldn’t make it, however, as he was pinched hard and hit the barricade before slamming into the pavement.

Degenkolb and Swift were sprinting directly behind the incident, and both ran head on into Cavendish’s prone figure, sending them vaulting over their handlebars and onto the ground.

The crash was met with heavy dispute. Sagan took the most criticism, however, for his apparent elbowing of Cavendish.

"I’ve now been able to watch the replay of the sprint a few times. Sagan deserves DQ on that one. Hope @MarkCavendish is ok. That was heavy"

Race commissaires agreed, and Sagan was disqualified from the Tour.

“I get on with Peter well but I don’t get it,” Cavendish said, who was on his way to get x-rays for a suspected shoulder injury and stitches to a bleeding right hand. “If he came across it’s one thing, but the elbow… I’m not a fan of him putting his elbow in like that. I get on with Peter, a crash is a crash, but I’d just like to know about the elbow.”

“I knew it would be a chaotic sprint today because everyone was fresh after riding so slow,” Démare said. “I found my way at the end. I was faster than Kristoff and I didn’t see anything of the last crash.”

It was a long journey for van Keirsbulck. The Belgian winner of the 2017 Le Samyn semi-classic attacked from the gun, committing to a lone journey after the lethargic peloton showed no immediate response.

Van Keirsbulck’s gap immediately rose to over 13 minutes after only 60 kilometers of racing. Regardless of the substantial margin, however, the teams behind in the main field were completely in control of the chase. Van Keirsbulck was allowed a substantial gap, speaking to the confidence of the sprinter’s teams during the mostly flat Stage 4. 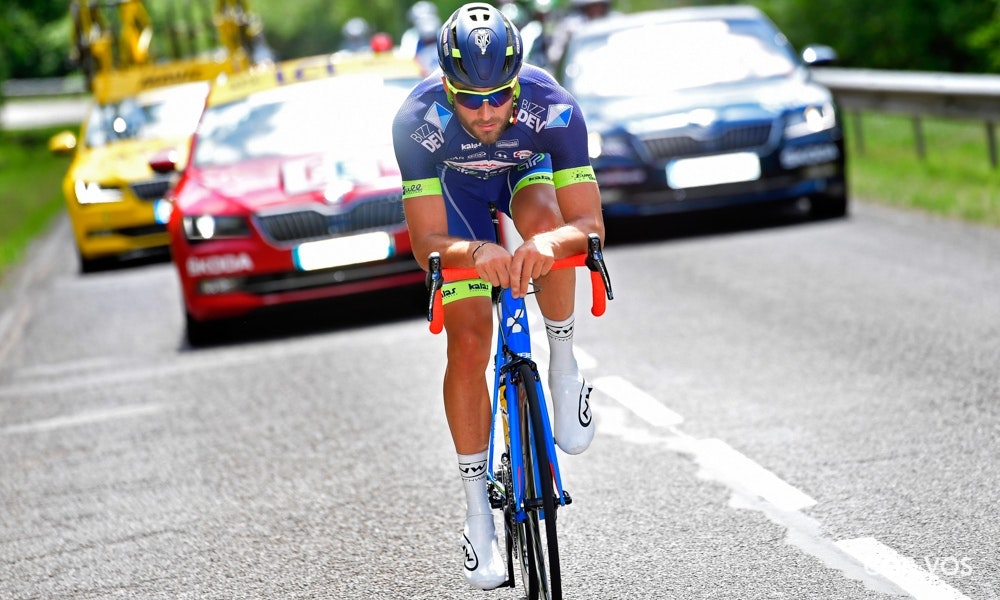 “When I jumped and I saw nobody came with me, I was skeptical but I really enjoyed it,” Van Keirsbulck said. “It’s nice to be at the Tour de France. All the people along the road are enthusiastic, so it wasn’t a boring day. I come from a cycling family. My grandparents are here, I see them sometimes next to the road. My other grandparents were probably watching TV. I was happy to make them happy.”

After picking up 20 points for winning the intermediate sprint (Démare and Sagan took second and third back in the field), and a KOM classification point, van Keirsbulck was reeled in with 17 kilometers remaining in the race and the day was one for the sprinters