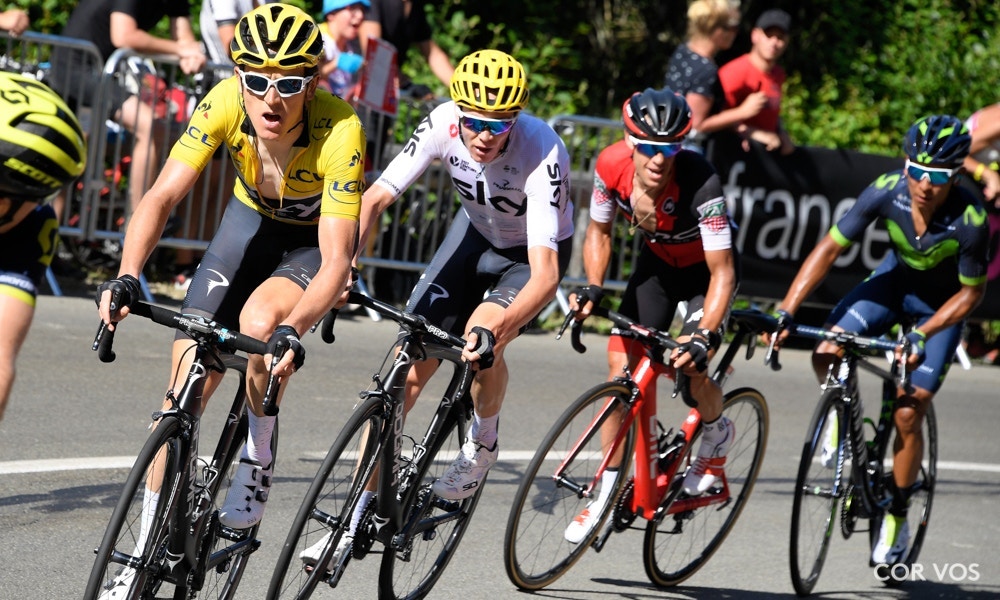 Italian national champion Fabio Aru (Astana) took the summit finish at La Planche des Belles Filles on Stage 5 of the Tour de France Wednesday, attacking out of a select group of 15 on the upper slopes of the six-kilometer ascent.

Irishman Dan Martin (Quick-Step Floors) was second across the line, with defending champion Chris Froome (Team Sky) 20 seconds back from Aru in third, vaulting the three-time winner into yellow.

“I think I’m realizing slowly what I’ve done today,” Aru said. “But of course I am extremely happy to win a stage of the Tour de France, that was missing in my career. This is fantastic after the months of injury I’ve had and the difficult time that my team has had recently.”

Regardless of Tuesday’s discord, which saw world champion Peter Sagan ejected from the race and Mark Cavendish forced to abandon with a fractured shoulder, the Tour de France continued on, with Stage 5 traveling from Vittel to the steep summit of La Planche des Belles Filles.

In a race with only three summit finishes, it was to be the first crucial stage for the GC men, with two categorized climbs on the profile — first, the category four Côte d’Esmoulières, at just over 100 kilometers in, and second, the category 1 La Planche des Belles Filles, a climb that was last seen in the 2014 Tour with Italian Vincenzo Nibali taking the win.

Despite their efforts, their margin only grew to a maximum of 3:30 on the 160 kilometer stage.

Bakelants was the first to the top of the Cote d’Esmoulieres, taking maximum KOM points. The breakaway was still on a short leash, with BMC Racing vigilant at the front of the peloton, their men controlling the chase. Richie Porte’s team would lead the peloton all the way into the final climb of the day.

Onto the lower slopes of La Planche des Belles Filles, Philippe Gilbert (Quick-Step Floors) was first to attempt to distance himself from his breakaway companions. Compatriot Jan Bakelants covered his move, and the pair rode on together, but it became quickly apparent that this final effort would be in vain.

“I wanted to make the breakaway today because if there was a chance to win a stage from a breakaway this week, it was today,” Gilbert said. “We never had a big lead but we kept believing we could reverse the situation. They were well organized behind us. I went again with Jan Bakelants but unfortunately it wasn’t enough for contesting the stage victory. I enjoyed the race a lot but the climb was very hard. It looked much easier when I watched it on TV.”

Young French phenom Lilian Calmejane (Direct Energie) was the first rider to attack out of the peloton at the base of the climb, quickly bridging to the two riders still hanging onto a marginal gap out front. Their time in front of the quickly approaching field was limited, however, with Team Sky taking the reins from BMC.

The vicious pace set by Sky lieutenants Michal Kwiatkowski, Mikel Nieve, and Sergio Henao quickly reeled in the three men out front, and with four kilometers remaining, the race was one for the GC men. The pace quickly created a select group, now midway up the final ascent of the day. Trek-Segafredo GC hope Bauke Mollema and Pierre Latour (AG2R La Mondiale) were the next to crack. 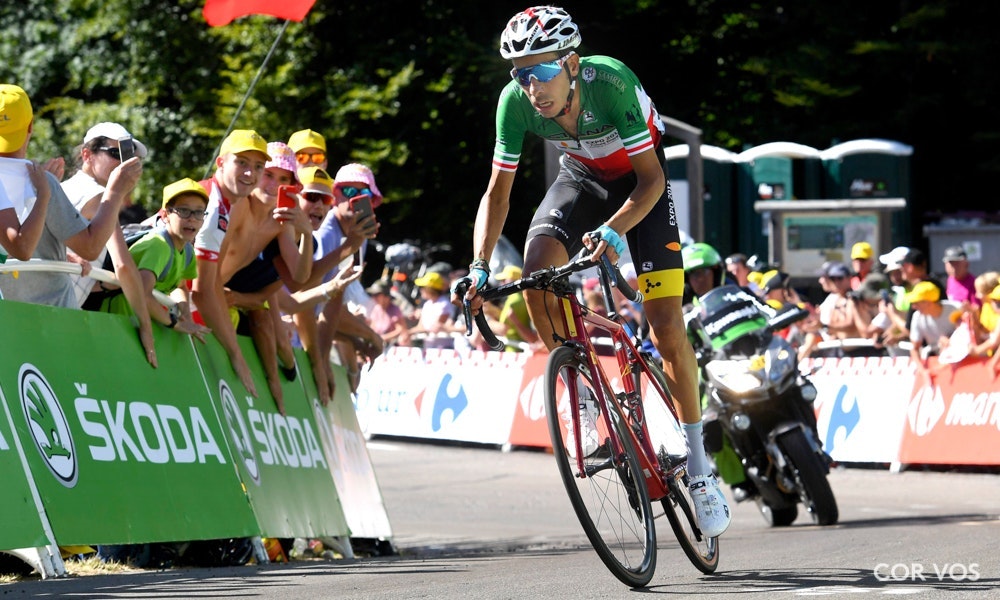 With 2.5 kilometers remaining, Aru challenged the composed steadiness of the Sky train with a vicious solo attempt. His margin quickly grew, with no immediate response from Sky’s Nieve at the head of the chase.

Simon Yates (Orica-Scott) was the next to make a move. The yellow jersey of Geraint Thomas responded, and Yates was brought back. Froome was the next to attack, but it was too little, too late, as Aru continued to distance his former companions.

“It’s clear that Aru was the strongest,” Bardet said. “He’s the only one who was able to attack and make a little gap. He surprised us by attacking from far but I’m happy because I managed to reply to Froome’s attack. I usually have complicated starts to the Tour, so this is a morale booster. It’s a good warm-up session. We were a few at the same level.”

Aru rose from the saddle and seemed to perpetually accelerate up the climb, even as the gradient rose over 20%. He crossed the line with 16 seconds over Martin, who put in an impressive final dig to overcome Froome, four seconds back.

“It’s an amazing feeling to be back in yellow,” Froome said. “It’s what I’ve worked all season for. The team did a great job, looking after me all day. Up to now, I think the team has been fantastic, and it’s a great reward to be in yellow. The race is still wide open, it’s very close. Fabio Aru did a great ride today, he’s proven to be quite a contender. It’s still a very close race at this point.”

“I think if anything we made little mistake watching each other on that flat part while Aru was gaining time up front. Otherwise we rode a good stage. We can be pretty happy, we are sitting first and second on GC. We still have options, and that could come in handy in the days ahead.” 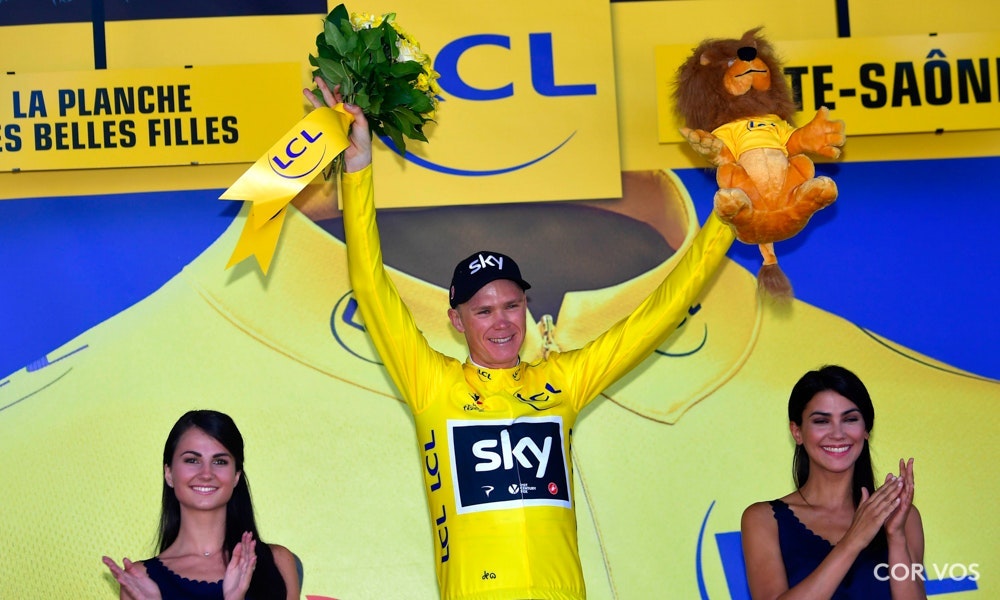 A familiar sight: Chris Froome (Team Sky) in the maillot jaune of the Tour de France.

“I can’t say any more for my team,” Porte said. “They were incredible today, [they] took it up. I think we kind of took it to them but in the final there Aru slipped away. I’m still happy with my ride for the first mountain stage. Kind of expect a little more but it’s a long way to go.”

With his performance, Aru moved into the polka-dot jersey of King of the Mountains. Arnaud Démare (FDJ) retained his green jersey of points leader, while Yates was presented with the white jersey of best young rider — the same jersey his twin brother Adam wore last July. Gilbert received the day’s combativity award.