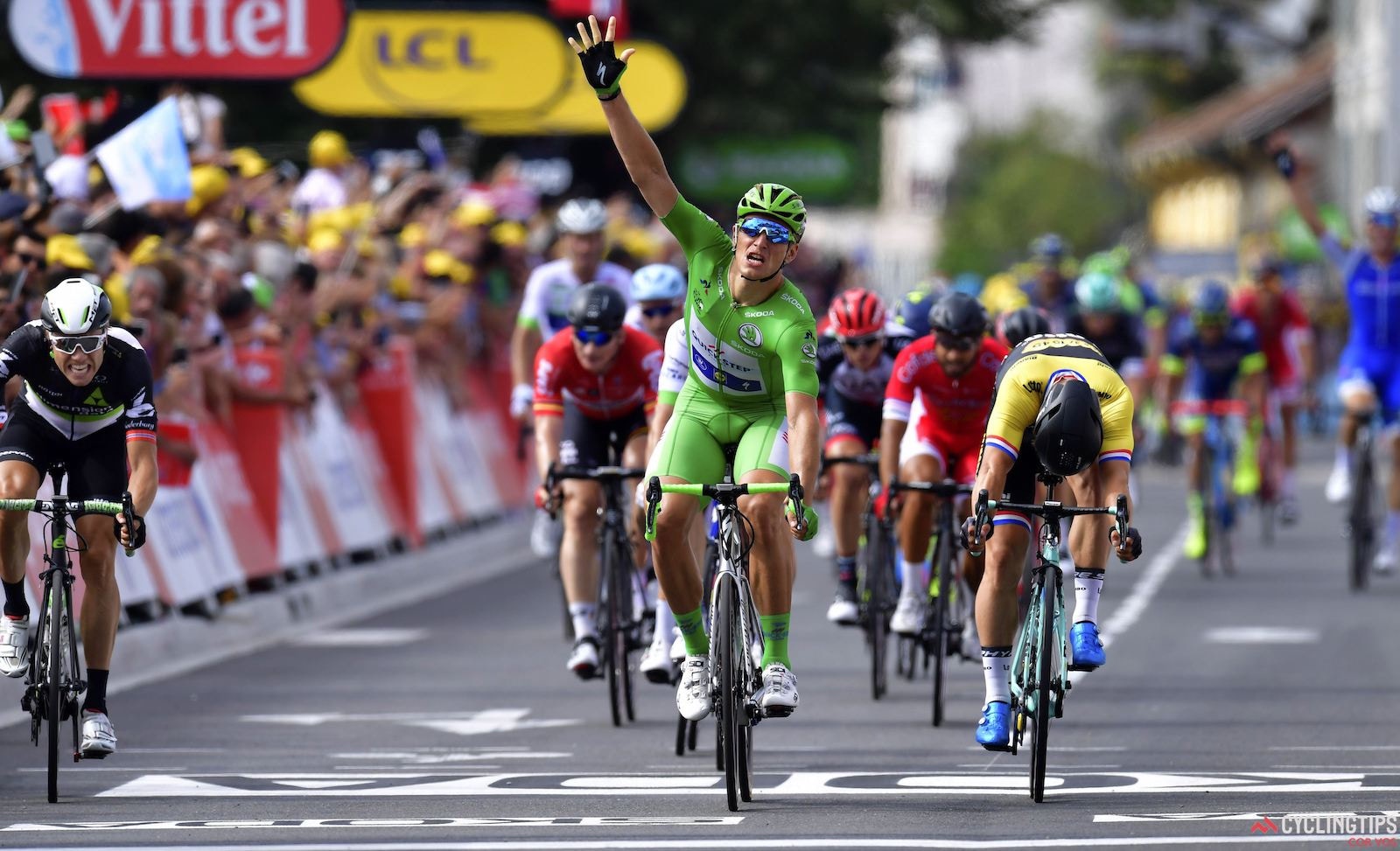 Kittel gave high praise to his unwavering team upon sprinting to the line again in first. “It’s incredible, sometimes when you are on your top level in sprint, it’s like playing Tetris, and in the last few games, I always got the right gaps, I never made a mistake,” he said. “I could jump from wheel to wheel. It’s incredible. I’m so happy. It’s so nice to give the team another victory. Today, Julien [Vermote] worked, [Philippe] Gilbert worked, Jack Bauer worked. They are all champions, and they’re all killing it here for me.”

The peloton once again lined up for a sprinter’s stage on Wednesday, embarking on a flat 203 kilometer jaunt from Eymet to Pau, “the Gateway to the Pyrenees.” The impending mountain stages meant Stage 11 would be another attempt at rest for the GC men, but it would be a difficult day for some despite the relatively unchallenging parcours. Yet despite the casual nature of the day there were multiple crashes.

Numerous GC contenders met the pavement. Dane Jakob Fuglsang (Astana), fifth on GC at 1:37 down, and French GC hope Romain Bardet (Ag2r La Mondiale), third on GC at 51 seconds back, both went down in separate slow-speed incidents, as did Alberto Contador (Trek-Segafredo), 12th on GC at 5:15.

“It was very nervous.” Bardet said post-stage. “I was twice caught in crashes. I’m happy to get away unhurt and to see the flat stages away. It’s never pleasant to crash twice. These are days when you need to be patient and wait for better days.” 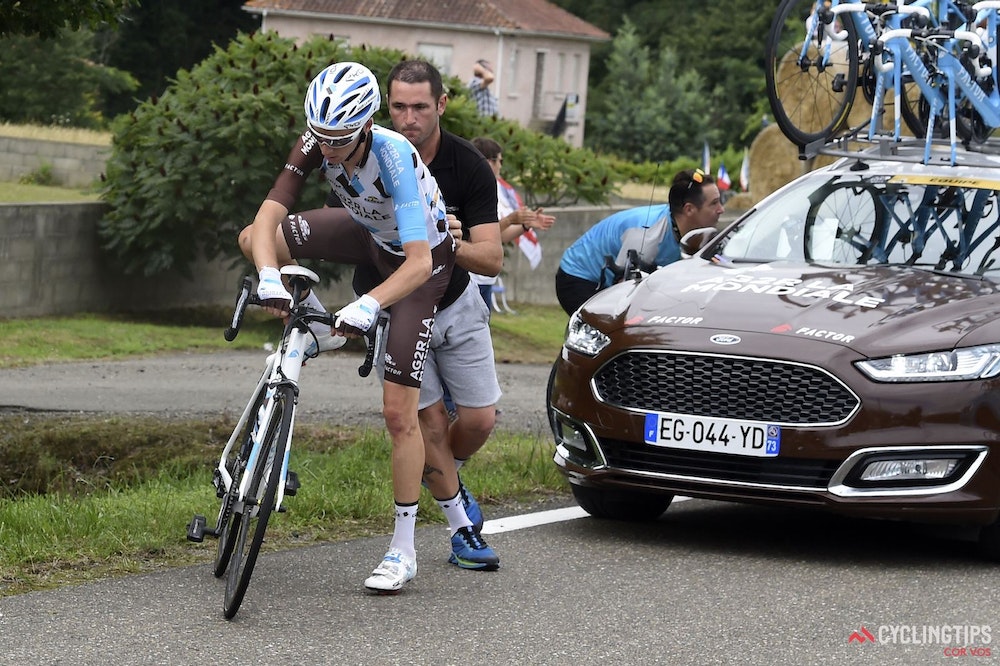 Romain Bardet (Ag2r La Mondiale) was twice caught up in cashes on Stage 11 from Eymet to Pau.

Critical Astana domestique Dario Cataldo abandoned the race after a crash in the feed zone at kilometer 107; Fabio Aru and Fuglsang will be sure to miss his presence going into the Pyrenees on Thursday. Fuglsang injured his wrist in the same crash, however x-rays showed no broken bones.

At 21 kilometers to go, as the final pursuit of Bodnar heated up, Contador went down in a small incident, but quickly rejoined the peloton after teammate Jarlinson Pantano aided him back.

Despite the headwind, the men of the breakaway again made an attempt at stage glory. Like Stages 3 and 6, Frederik Backaert of Wanty-Groupe Gobert was involved once again. Joining him was Marco Marcato (UAE Team Emirates) and Macej Bodnar (Bora-Hansgrohe), and their gap rose immediately, edging close to five minutes before Quick-Step Floors’ unwavering diesel Julien Vermote once again took the front of the peloton to monitor the gap. Members of Lotto-Soudal and Katusha also aided the chase.

The intermediate sprint came at kilometer 142, with the members of the breakaway scooping up most of the points. Alexander Kristoff (Katusha-Alpecin) narrowly edged out Michael Matthews (Sunweb). Matthews still sits second in the green jersey competition, but after Kittel’s fifth stage win, the Australian is over 130 points behind. 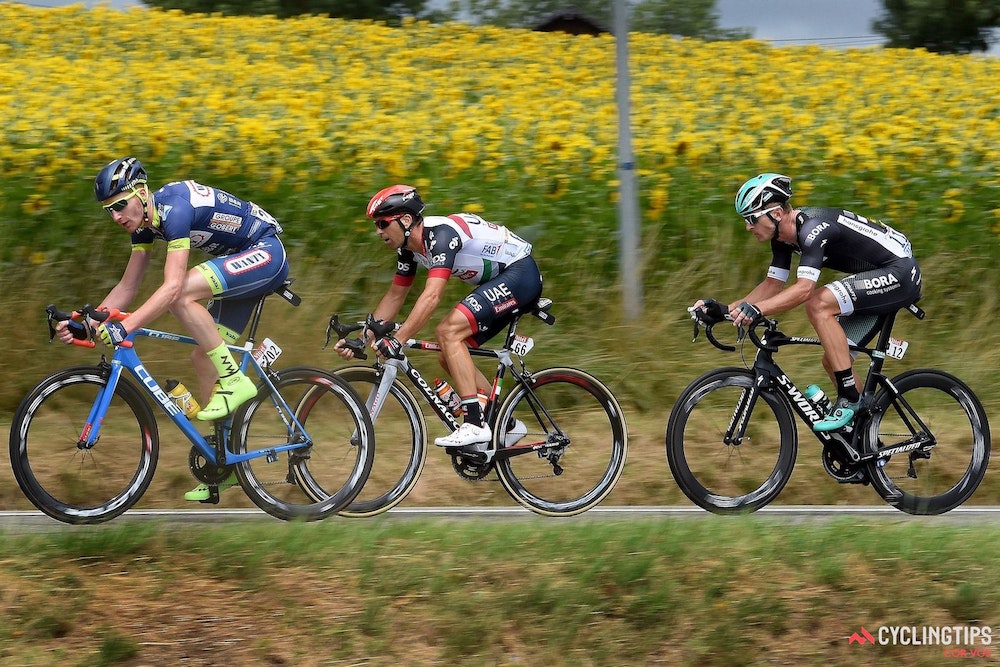 Forty kilometers to go saw the breakaway’s gap dip under 1:00 after a diligent chase at the front of the peloton. It looked to be an early end to their efforts, but they continued for ten more kilometers, the gap falling to just under 40 seconds.

Bodnar wasn’t ready for his day to conclude, however, attacking Marcato and Backaert 27 kilometers out. A multi-time Polish national time trial champion, Bodnar immediately assumed an aerodynamic tuck and distanced his fatigued breakaway partners, who were quickly absorbed by the peloton.

A technical final five kilometers meant Bodnar had a chance. He railed through multiple corners with the peloton 20 seconds behind. His cadence had slowed, however, and his upper body began to rock after the effort of 200 kilometers out front. He passed under the flamme rouge with a narrow 10-second lead, the sprint beginning to heat up.

Bodnar rose from the saddle and attempted a sprint with 500 meters remaining, a feat considering the lactic acid accumulation from his daring effort. But behind, Fabio Sabatini, Kittel’s final leadout man, was charging. Bodnar was finally caught with just over 300 meters remaining.

“I felt I had really good legs today and jumped in the breakaway from the start,” Bodnar said. “The three of us collaborated and thanks to them we all worked together well. When the gap was down to about forty seconds, I decided to go alone and try my chances for a stage win. I was slowing down a little in the last 10km and the wind was a problem, but I still had a bit of a lead on the peloton. In the end it was so close – just a few hundred meters – but what can I do? I tried my best. With 2km to go, the bunch still hadn’t caught me, they were about 200m behind me, and I was starting to think I could do it, but the last 400m were really hard for me. The bunch was going really fast, so that was that – just ten seconds more and I’d have taken it.”

Sabatini pulled off, content with the catch, as Mark Renshaw took the front. His sprinter in the absence of Mark Cavendish, Boasson Hagen, was on his wheel, followed by Matthews and Continental Pro Dan McLay (Fortuneo-Oscaro).

Kittel appeared to be too far back, but as the sprint was launched and gaps began opening, he turned on the afterburners, moved around the outside of the scrum with Groenewegen in tow, and overcame everyone for the win. Boasson Hagen, passed with 10 meters remaining, punched his bars frustratingly, as Kittel raised his right hand, five fingers outstretched.

Race leader Chris Froome finished safely in the bunch, and will spend Thursday — an uphill finish after a brutal day in the Pyrenees — again in yellow.

“It was a bit more nervous today, there was always the threat of crosswinds, and that was enough to shake the race up,” Froome said. “It was a day where you have to stay concentrated, you have to stay up front. My teammates were brilliant, they kept me in great position, so I have to say thanks to them.

“We have two uphill finishes left, and tomorrow is one of them,” Froome added. “I think it’s going to help shape the GC further. We don’t want to let any people come back on GC, so we will want to control things, and not allow GC guys who have lost time to come back into the game. I don’t need to attack, but let’s see what happens out on the road.” 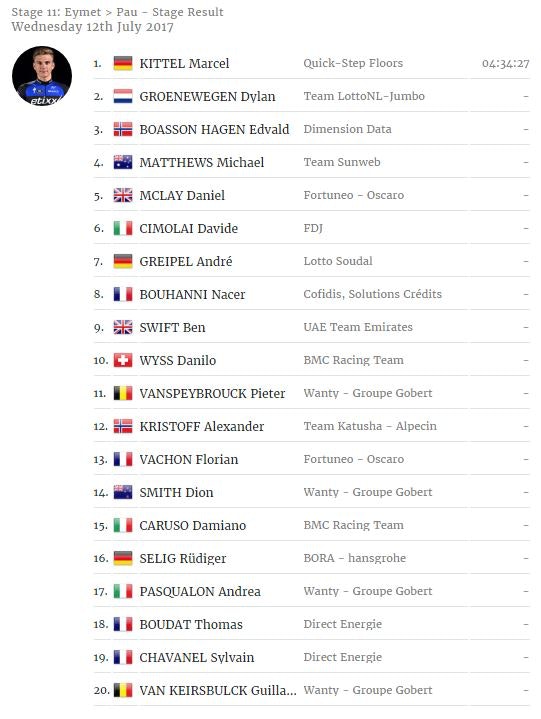