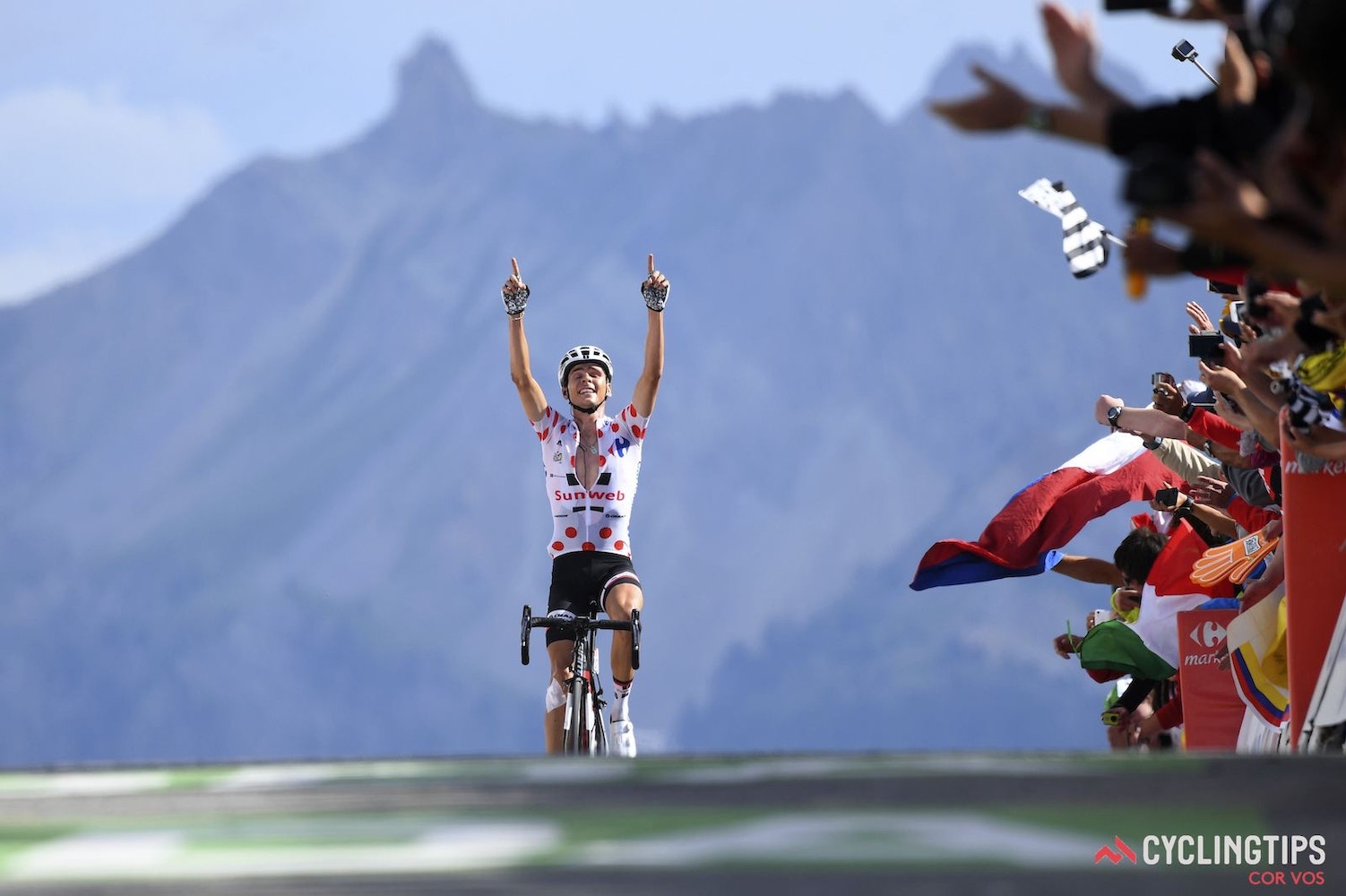 Frenchman Warren Barguil (Sunweb) attacked the final selection of GC favorites on the steep slopes of the Col d’Izoard, and then overcame the remnants of the day’s breakaway, to claim Stage 18 resplendent in the polka-dot jersey of King of the Mountains.

Stage 18 marks Barguil’s second win of the 2017 Tour after his Stage 13 victory in Foix. Save any catastrophes over the next two days, Barguil will also wear the King of the Mountains jersey in Paris, alongside teammate Michael Matthews, who has sewn up the green points jersey.

“This is really fantastic, I can’t believe it,” said Barguil. “It’s really a dream to take another win. I wanted to take some extra time in the GC so I just rode my own climb and paced myself to the top. I managed to close to the leader and then when I still had the legs left, I continued to the line. It’s brilliant for us to have four stage victories now, it’s unbelievable.”

Stage 18 would be the final battle in the mountains, culminating on the Col d’Izoard, the last chance for GC men to challenge yellow jersey Chris Froome before Saturday’s individual time trial in Marseilles.

Eagerness would prevail as the first group to distance itself from the field was composed of 54 riders. Their gap would grow quickly as Team Sky, in control of the peloton, lacked concern and let the move roll.

The large selection out front would reset itself multiple times prior to the first major climb of the day, the Col de Vars. The 54 men would split into two groups on the Col de Vars, and near the top, Romain Sicard (Direct Energie), Darwin Atapuma (UAE Team Emirates), Tony Gallopin (Lotto-Soudal), and Alexey Lutsenko (Astana) would create distance, forming a true breakaway over the top of the first Col.

Behind, Ag2r La Mondiale took control from Sky into the bottom of the Col d’Izoard, setting tempo for team leader Romain Bardet.

Before the significant gradients, the pace set by Ag2r would detach a significant amount of riders from the main peloton.

Team Sky would assume the pacesetting yet again, with Michal Kwiatkowski leading the group until midway up the Izoard. Kwiatkowski gave everything he had on the front of the GC group and would pull off the front and stop, even unclipping and putting a foot down aside the road, completely overcome by the effort.

Barguil caught and passed Atapuma to stay clear for the stage win, while attacks flew from the GC group.

Dan Martin (Quick-Step Floors), Bardet, and Mikel Landa (Team Sky) all attacked from the group of favorites, with Landa opening daylight before Froome attempted to bridge up to his teammate and contend for the stage win. The attacks distanced several riders, including Italian Fabio Aru (Astana), who started the day fourth overall but would lose 1:02 to Froome and Bardet and drop to fifth, 1:55 behind Froome.

Rigoberto Uran (Cannondale-Drapac) chased Froome down with Bardet on his wheel, and the four riders — Landa, Froome, Uran, and Bardet — raced to the line together, with Bardet taking the remaining four seconds of time bonus available. Froome and Bardet crossed the line two seconds ahead of Uran, meaning that Bardet took a total of six seconds on the Colombian.

Bardet, who looked to be in serious physical distress across the line, conceded that he may not win this Tour de France, but that he had “nothing to regret.”

“I gave it my all. I thought I was going to choke on the line,” he said. “I made it on mental strength. I knew the ascent well, I knew that beyond 2,000 metres, with all my efforts, it was going to hurt. It would have been ideal to make it back on Warren. But it was a super victory for him, amply deserved… I played it cute, I tried to make believe I was not super. I made my move shortly before the descent. I risked everything. I have nothing to regret. Now we have the time trial, but the Tour is already a success. We confirmed what we did last year, we went a step further.”

Froome, who has not yet won a stage at this Tour — or a race this year — said he’d hoped to fight for the stage win but could be content with his GC position, 23 seconds ahead of Bardet and 29 seconds ahead of Uran.

“Of course it would have been nice to take a little bit of time today,” Froome said. “I got a few seconds over Uran, who I think will be my main rival in the time trial. The team was fantastic, it was great to have numbers, and to be able to control things. We had that card to play with Mikel Landa, and then I tried to give it a dig. I thought I had a gap, but I guess Uran brought it back.

Check back shortly for a full race report, photos, videos, and more. 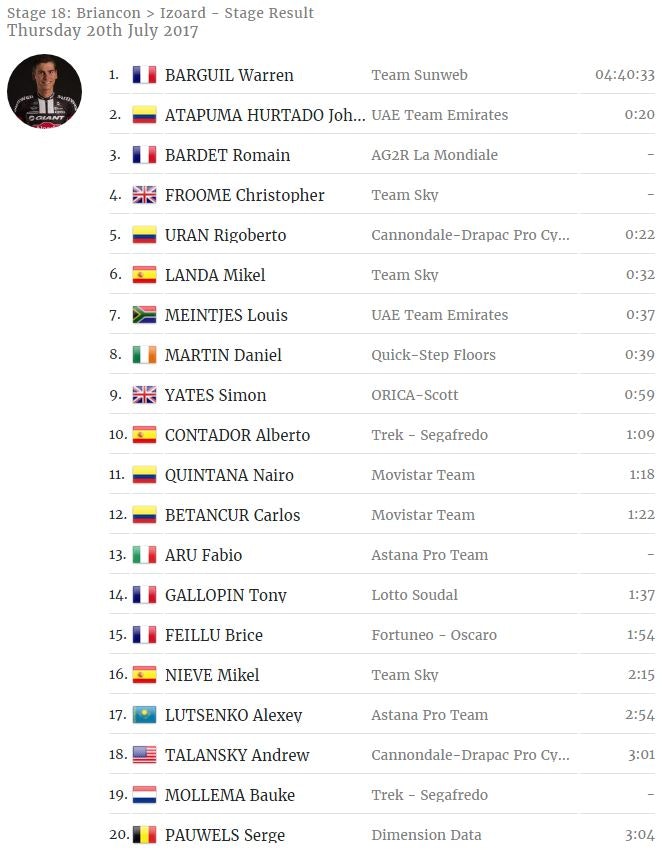