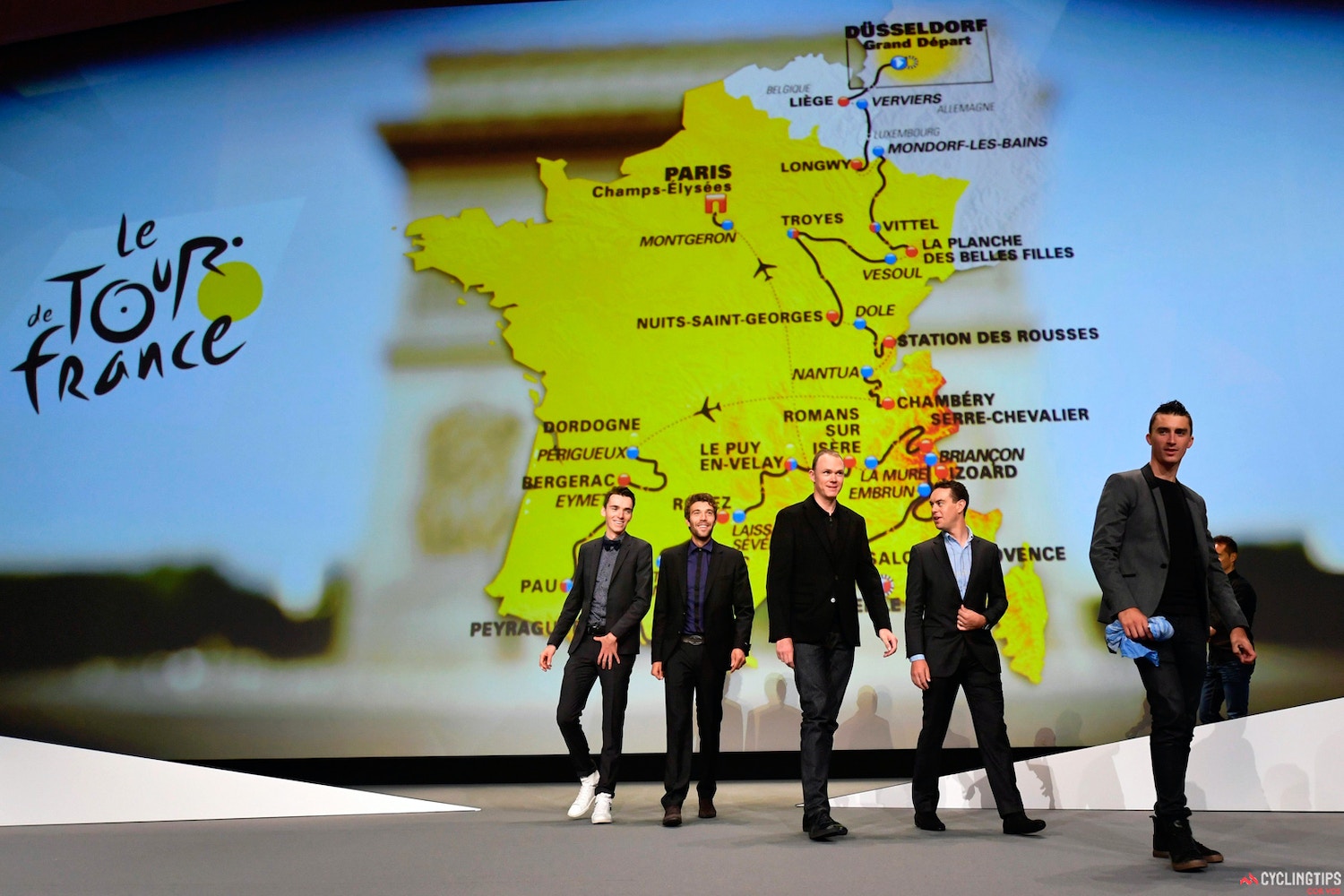 Avoiding the most famous stage finishes of Alpe d’Huez and Mont Ventoux, the organizers of the Tour de France have opted for a course with many new climbs in the 2017 route. The parcours of the race was unveiled on Tuesday in Paris, and sees the race begin in Dusseldorf in Germany and visit Belgium and Luxembourg before reaching France on day four.

The race will visit all five of the mountain regions in France, beginning with the Vosges and Jura, then tackling the Pyrenees, the Massif Central and the Alps. There will be a total of 23 HC, first or second category climbs, compared to 25 in 2014 and 2015 and 28 in 2016.

However the organizers point out the steepness of some of this year’s ascents, with peak gradients ranging from 14% on the Col de Perya Taillade to 22% on the Grand Colombier.

The 2017 Tour de France totals 3516 kilometers in all, spread over 21 stages, and features a short 13.8 kilometer time trial on the opening day and a 23 kilometer solo effort on the penultimate stage.

There will be just three summit finishes, namely La Planche des Belles Filles on day five, Peyragudes on stage 12 and the Col d’Izoard on stage 18. The other mountain stages will conclude on descents, designed, perhaps, to help the 2016 runner-up Romain Bardet. He is vying to become France’s first winner since Bernard Hinault in 1985.

There will be a total of nine flatter stages which will appeal to rouleurs and bunch sprinters. Providing he is on form, this could give Mark Cavendish the platform to equal or beat Eddy Merckx’s all time stage win record of 34 victories. Cavendish brought his tally up to 30 in 2016 when he clocked up four stage wins.

According to race organizer Christian Prudhomme, one motivation behind the route design is to dissuade what he termed a ‘catenaccio’ racing style. He was referring to the dominance of one squad, taken to mean Team Sky, and he hopes that the route will help to achieve this goal.

He has also echoed calls for teams to drop from nine to eight riders in the 2017 race. This too is intended to make things harder to control and to increase suspense. The 2017 Tour begins with the aforementioned 13.8 kilometer time trial in Dusseldorf, Germany, on July 1. World time trial champion Tony Martin will try to win on home soil and take yellow, while contenders such as Chris Froome will seek to gain an early advantage over his rivals.

Day two runs 202 kilometers from Dusseldorf to Liège in Belgium and should suit breakaway specialists or sprinters. Stage three is exactly the same length and begins in Verviers and concludes in Longwy. The final 1.6 kilometers average 5.8 percent and includes a ramp of 11 percent, suiting explosive riders.

Stage four from Mondorf-les-Bains in Luxembourg to Vittel is 203 kilometers in length and should give the sprinters another opportunity. 24 hours later the first proper summit finish rears up, with the race concluding at La Planche des Belles Filles for the third time in the Tour’s history.

Chris Froome (2012) and Vincenzo Nibali (2014) triumphed on the two previous visits and went on to win the race overall. This stat will likely give the GC riders additional motivation to try to hit the line first.

Stages six and seven extend 216 and 214 kilometers respectively, concluding at Troyes and Nuits-Saint-Georges, and give further opportunity to breakaway riders and sprinters.

The race’s next summit finish appears on July 8 with a 187 kilometer battle to the Station des Rousses. This is then followed by a slightly-shorter 181 kilometer leg between Nantua and Chambéry, which includes the Grand Colombier climb and the fearsome Mont du Chat, where Raymond Poulidor dropped Eddy Merckx during the 1974 Tour.

After the summit the riders will race down to the finish line and the end of the first block of competition.

HEADING TO THE PYRENEES

Following an air transfer and the first rest day on July 10, the race restarts on the other side of France in Périgueux. The stages to Bergerac (178km) and Pau (202km) should be bunch gallops, but stage 12 to Peyragudes takes in a number of climbs, including the Peyresourde, prior to the summit finish.

The following day is another climber’s stage but concludes with a descent into Foix. At just 100 kilometers in length, Prudhomme terms it the shortest road stage in 30 years. This plus the fact that it is being held on Bastille Day guarantees many attacks.

The following two days will see the riders tackle lumpy terrain en route to Rodez (181km) and Le Puy-en-Velay (189km) and will please breakaway riders. Once completed, the peloton will have another rest day, pausing before the final GC skirmishes and then Paris. RETURNING TO THE ALPS

The action recommences on July 18 with a 165 kilometer race from Brioude to Romans-sur-Isère. The 165km route is lumpy early on but either downhill or flat in the second half of the day, pitching sprinters and breakaway riders against each other.

Stage 17 to Serre Chevalier (183km) is another matter, climbing the Col de la Croix de Fer and the Col du Telegraphe prior to a fast drop down to the line.

The following day is another climber’s stage but will conclude atop the Col d’Izoard. The famous climb will also host the women’s La Course event, which will move away from the previous host city of Paris.

Although stage 19 from Embrun is lumpy, the 220 km route to Salon-de-Provence is largely downhill and will likely prevent climbers from being able to continue their battle for yellow. Instead, the last scores will be settled on July 22nd with a 23 kilometer individual time trial in Marseille.

After that, there only remains a final stage from Montgeron to Paris, where the sprinters will engage in one final tussle and the 2017 winner will be coronated