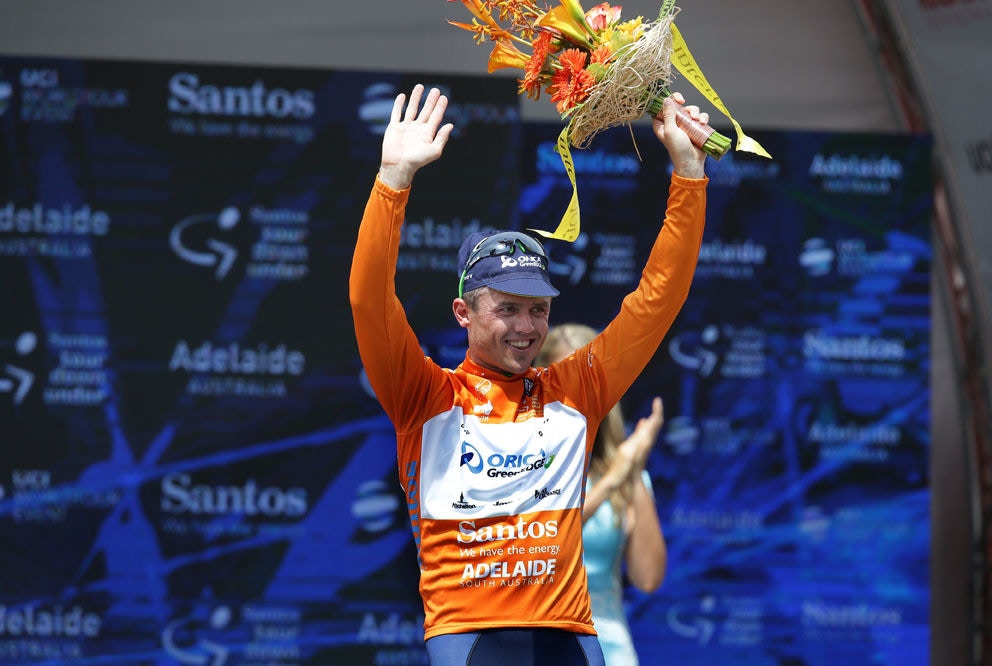 ADELAIDE, Australia (CT) – Simon Gerrans (Orica-GreenEdge) has won an entertaining third stage of the 2016 Santos Tour Down Under, propelling himself into the overall lead in the process.

Gerrans was part of a 10-rider lead group that came to the finish together after forming on the short descent from the top of the Corkscrew Road climb, less than 1.8 mile from the finish.

Gerrans started his sprint from near the back of the small group but managed to overhaul Rohan Dennis (BMC) on the line. Cannondale’s 29-year-old neo-pro Michael Woods (Cannondale) finished third.

“I come from quite a ways back,” Gerrans said. “I knew it was going to be a fast finish but everyone was pretty hammered after getting over the Corkscrew.

“[I’m] really thrilled to be able to win it, even by the narrowest of margins.”

Earlier in the stage, on the approach to the final climb, a crash in the peloton saw Gerrans and his Orica-GreenEdge teammates split from the back of the bunch. Gerrans was able to make up ground on the fast Gorge Road descent, however, and started the Corkscrew Road climb in perfect position.

“It was hectic — it was really scary going down there,” Gerrans said of the Gorge Road descent. “I had some great support … Daryl Impey and Mat Hayman and Michael Albasini were all right there in the final for me and they placed me perfectly to give me the best opportunity on the Corkscrew.”

Gerrans’ win is his first individual success since September 2014 and comes after a 2015 season that was plagued by a string of crashes and injuries. It also comes a day after crashing out of stage 2 of the Tour Down Under, just 1500ft from the finish.

“The guys worked so hard for me yesterday and they really laid it on the line and gave me every opportunity,” Gerrans said. “[To] just have a mishap so close to the finish when I was feeling so good was bitterly disappointing for myself and the entire team.

“So to come away 24 hours later with a win and now the lead — I think everyone will be really happy tonight.”

Stage 3 of the 2016 Tour Down Under began in the seaside suburb of Glenelg with 137 riders rolling across the startline. After heading south the race would swing north east into the Adelaide Hills, bound for Campbelltown via the short but imposing Corkscrew Road climb in the final 6 miles.

With UniSA-Australia focusing on the final climb rather than a breakaway, it was Astana’s Laurens De Vreese that made the first move of the day, attacking in the opening kilometre. The Tinkoff team of race leader Jay McCarthy took to the front of the peloton as De Vreese’s lead reached 3:00 after just 3.7 miles but then stabilized at around 2:30. A small crash after 13.7 miles saw Rohan Dennis (BMC) hit the ground (among others) but after a bike change the defending champion was back in the bunch, doctors clearing him of any injury.

Tinkoff continued to ride the front of the peloton, controlling the race for McCarthy, as De Vreese’s lead fluctuated at between 1:20 and 3:10 over the next 37 miles. With 55 miles of racing complete and 31 miles to go, the Belgian’s lead was 2:30 but it would blow out to four minutes over the next few miles.

De Vreese again took the maximum prize at the second intermediate sprint, 26 miles from the finish, while back in the bunch Tinkoff and Orica-GreenEdge were lining up to secure the remaining bonus seconds. Caleb Ewan took second in the red sprinter’s jersey, while Jay McCarthy was again third, claiming another bonus second.

After a brief rest back in the bunch, the Tinkoff riders returned to the front of the peloton with 20 miles remaining and with De Vreese’s lead sitting at 3:35. When the race reached Lobethal and the start of the mostly downhill run to the base of Corkscrew Road, a sense of urgency came over the peloton.

Teams started lining up at the front, trying to ensure a good position on approach to the steep climb. The increased tempo saw De Vreese’s lead slashed to 2:30 with 17.4 miles to go and 1:30 with 15.5 miles to go. He was caught 13.2 miles from the finish with IAM driving the pace at the front of the peloton.

The Gorge Road descent was frenetic with the peloton reportedly topping 62 mph on several occasions. A crash with 11.8 miles to go saw a handful of riders hit the ground, including Julian Arredondo (Trek-Segafredo), Koen de Kort (Giant-Alpecin), Marcus Burghardt (BMC) and Tyler Farrar (Dimension Data). A scuffed up Farrar would go on to ride to the finish on a bike borrowed from a spectator.

The crash split the peloton with Simon Gerrans and his Orica-GreenEdge teammates caught behind as Tinkoff again rode the front. The bunch was back together with 10.5 miles to go, however, as the peloton continued the serpentine descent.

Team Sky made its presence felt on the front but when the bunch turned onto Corkscrew Road, with 6 miles to go, it was Tinkoff that was again in control with Jay McCarthy sitting in third wheel.

LottoNL-Jumbo rode the front on the lower slopes of the climb before McCarthy attacked, drawing a response from Gerrans. Richie Porte was the next to attack and while he wasn’t able to get clear, the Tasmanian helped to further split the peloton.

As the climb flattened out towards the top, Michael Woods attacked from a dramatically thinned-out lead group, taking Sergio Henao (Sky) with him. The pair powered over the top of the climb, 3.5 miles from the finish, with a handful of seconds over a chase group containing Gerrans, McCarthy, Porte, Dennis and several others.

Woods and Henao would be caught with 1.55 miles still to race, the eight-rider chase group having made up ground on the fast, flowing descent of Montacute Road — the site of Cadel Evans’ famous descent of two years ago.

The 10-rider lead group hit the final corner together, with 900ft to go, before Ruben Fernandez (Movistar) launched the first sprint. Rohan Dennis followed while Gerrans and Woods made their move from well back in the group.

In the end it was the staying power of Gerrans that allowed him to overhaul Dennis just before the line, winning the stage with a bike throw. The Tour Down Under continues tomorrow with a 85 mile stage from Norwood to Victor Harbor. Despite a short climb roughly 12.4 miles from the finish, the stage will likely end in a bunch sprint.

Gerrans will wear the ochre jersey and might again be tempted by the prospect of taking bonus seconds at the intermediate sprints. Jay McCarthy will wear the red jersey of points classification leader, Sergio Henao will wear the polka dots of KOM leader, and Ruben Fernandez will wear the green best young rider’s jersey in lieu of leader McCarthy.