Gerro Makes it Three Out of Four for OGE 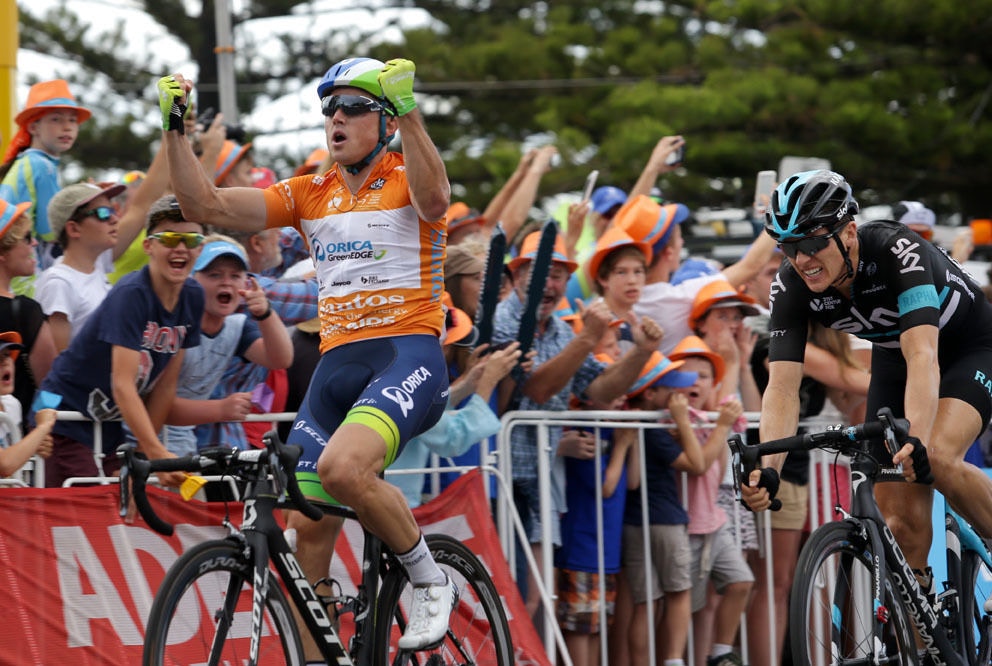 VICTOR HARBOR, Australia (CT) – Simon Gerrans (Orica-GreenEdge) has the 2016 Santos Tour Down Under in a stranglehold after taking a second consecutive victory on stage 4 this afternoon.

Gerrans won the sprint from a group of roughly 40 riders after the peloton split in the closing 12.5 miles and after another impressive supporting ride from his teammates. Ben Swift was second while Giacomo Nizzolo (Trek-Segafredo) was third.

Orica-GreenEdge had gone into the stage with two options for the win: Gerrans, or stage 1 winner Caleb Ewan. A climb in the closing 12.5 miles saw Ewan dropped and Orica-GreenEdge focus their efforts on Gerrans.

“We knew the run-in to the finish was going to be a little bit selective so it was touch and go whether Caleb was going to be there,” Gerrans said. “But if he was there we were going to go with him. If not I was going to have my opportunity.

Orica-GreenEdge had kept the early part of the race under control, thereby giving Gerrans the opportunity to sprint for bonus seconds at the first intermediate sprint. He duly repaid his teammates’ efforts, beating stage 2 winner Jay McCarthy (Tinkoff) to extend his lead by one second. And then at the finish, after a three-rider break had been captured, Gerrans was piloted into perfect position by South African teammate Daryl Impey. From there Gerrans did the rest, winning the stage and claiming another 10-second time bonus.

The win makes Gerrans the first rider to win back-to-back Tour Down Under stages since Andre Greipel achieved the feat back in 2010. It also puts Gerrans one step closer to winning a record-extending fourth Tour Down Under title.

But despite leading the race by 14 seconds (the last two editions have been won by one and two seconds respectively) Gerrans certainly isn’t celebrating yet. The Victorian believes tomorrow’s queen stage up Willunga Hill could still affect the result.

“We’ve seen the jersey change hands many times on Old Willunga Hill,” Gerrans said. “So we’re still going to have our work cut out tomorrow.”

For now though, the ball is in Orica-GreenEdge’s court and it will be up to Richie Porte, Rohan Dennis (both BMC), Jay McCarthy and others to attack Gerrans.

“It’s not in my interests to attack at all,” Gerrans said of tomorrow’s stage. “I’ve really got to try and defend this jersey and it’s up to those guys really to drop me and they have to put a bit of time into me on the climb now.

“But the way my team is riding and supporting me it gives me a lot of confidence going into tomorrow.”

With two stages remaining in the 2016 Tour Down Under Gerrans leads Jay McCarthy by 14 seconds while Rohan Dennis remains in third, a further 12 seconds in arrears.

Stage 4 of the 2016 Santos Tour Down Under began in the inner Adelaide suburb of Norwood with 136 riders taking to the startline. The race was headed for the seaside holiday town of Victor Harbor where heavy winds and rain were forecast, but never eventuated.

Again the climbing started from the end of the neutral zone with the race heading up Old Norton Summit Road, a popular climb with local riders.

There were several attacks on the 3.1 mile climb as a group of three got away and then attracted two more riders. But with Orica-GreenEdge keen to keep the race together ahead of the first intermediate sprint, the race was all back together after just 8.7 miless.

Shortly after the intermediate sprint the day’s main breakaway got clear. Alexis Gougeard (Ag2r La Mondiale) was joined by two Australians in Pat Shaw (UniSA-Australia) and David Tanner (IAM Cycling), the trio building a lead of one minute by the 22.5 mile point. By 24.8 miles the leaders had 3:45 and by 27.5 miles the gap wasp to 5:44 — the biggest breakaway of the Tour Down Under so far. But it wasn’t long until Orica-GreenEdge started chasing in earnest, quickly bringing the gap back down to roughly three minutes after 31 miles of racing.

The gap would come down slightly over the next hour as Orica-GreenEdge continued to lead the bunch on its southward journey towards Victor Harbor. After 54 miles of racing and with 31 miles to go, the leading trio was two minutes clear of the bunch with the lead being steadily eroded by the hard-working Cannondale riders.

With 24.8 miles to race the lead was down to 1:43 and the second intermediate sprint was just a few miles away. The breakaway riders would mop up the points and the bonus seconds with Shaw crossing the line in Goolwa ahead of Gougeard and Tanner.

The promise of strong crosswinds along the coast saw Cannondale increase the tempo in the peloton. The gap had come down to 40 seconds with 21.75 miles to go before BMC and Tinkoff joined the chase.

The three-rider breakaway was caught in Port Elliot with 15 miles to go as the day’s only categorized climb began. The pace lifted on the 2.5 mile Kirby Hill ascent with many riders finding themselves in difficulty as the lead group rode away.

Richie Porte (BMC) sprinted for the KOM points on offer at the top but he was comfortably accounted for by former teammate Sergio Henao (Sky) who crossed the top first and extended his lead in the climber’s classification.

A crash on the descent with 11.5 miles to race saw Julian Arredondo (Trek-Segafredo) hit the ground for the second day in a row, while several others also took a tumble. The crash created a further split in the peloton leaving roughly 40 riders at the front of the race.

Jesus Herrada (Movistar) and Lieuwe Westra (Astana) both put in short-lived attacks but it was all back together with 5 miles to race as Sky lined out the peloton in support of Ben Swift.

Katusha and Cannondale made their presence felt in the closing miles, but the run-in to Victor Harbor was dominated by Sky and Peter Kennaugh in particular. Sky rounded the final corner in the lead but behind them Impey was delivering Gerrans into position for the final sprint.

The 35-year-old kicked hard, hitting the front and holding off Swift and Nizzolo to notch his second win in as many days. Crucially, the win also sees Gerrans extend his overall lead. Two stages remain in the 2016 Tour Down Under, not least tomorrow’s queen stage which concludes atop Willunga Hill. The riders will take in two ascents of the now-famous, 2 mile climb after three laps of a circuit through the McLaren Vale wine region.