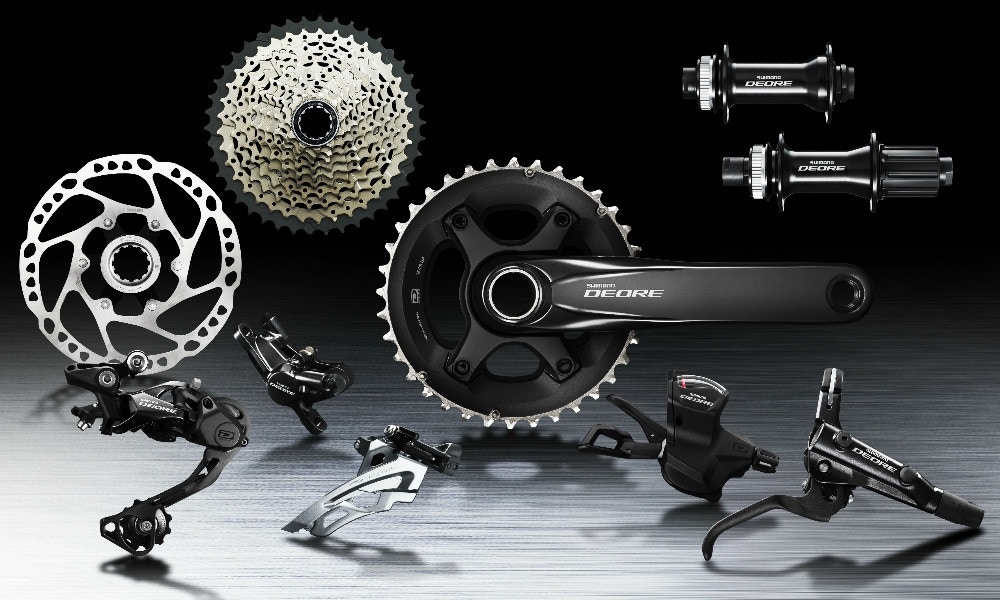 Walk into any bike shop, look at the beginner to intermediate mountain bikes and it’s likely to only see Shimano shifting components. These components are a long-standing staple in Shimano’s range and used by many cyclists the world over. In addition to releasing the new Deore M6000 groupset, Shimano has announced a number of updates to its cheaper Alivio, Acera and Altus components, along with a few new things for the higher-end SLX and XT too. We break down exactly what you need to know with the ten points below.

Deore has long been the group of choice for mountain enthusiasts on a budget, forever representing strong value for money.

The trickle down of current technology seen in upper-tier XTR, XT and more recently SLX components has been expected to arrive at Deore. However, while new Deore M6000 borrows a number of features and aesthetic qualities from its more expensive siblings, it hasn’t adopted the 11 gears at the back.

Instead, new Deore remains as a 10-speed group available with either double or triple ring cranksets. While the new Deore may not have gained an extra gear, it now offers the same effective gear range as SLX, XT and XTR. Here, a new 10-speed 11-42T Dyna-Sys cassette (CS-HG500) represents the biggest change for the updated group.

No 1x Specific option for Deore That’s correct, new Deore isn’t offered in a single chainring option. Instead, Deore gets a SLX-look-a-like four-arm Hollowtech II crankset, with double options in 38-28T, 36-26T and 34-24T combinations. A triple version, with 40-30-22T chainrings will be available too.

Many will be left wondering where the single ring option is, and while Shimano hasn’t provided it, we expect many bike brands to setup the new 11-42T Deore cassette and related components with an alternate single-ring crankset.

Deore derailleurs and shifters get an update Looking to the front derailleurs and more options are given to best meet new cable routing standards and increased demands for clearance with rear suspension systems and tire clearance. A total of five mounting options now exist, including high, low, direct-mount, e-type and a new mid-type.

New RapidFire Plus shift levers (SL-M6000) are given a minor tweak from previous, with the visual display for gear choice remaining. Shimano Deore brakes have long been considered the benchmark of intermediate hydraulic disc brakes. They’re well respected for consistently offering impressive braking control and undeniable reliability. That trend looks to continue with the new Deore brakes that offer a new Servo wave high power lever (BL-M6000) and heat insulated calipers (BR-M6000), which, can accommodate Ice-Tech finned brake pads. Both of these aspects have been well proven in SLX, XT and XTR ranges. Shimano has long offered its ‘non-series’ components for when bike brands want to mix-and-match components, especially where a complete groupset may not be affordable. This is commonly seen in brake and crankset choices, with bikes often featuring a lower level part that’s simply labelled as ‘Shimano’ without a specific group name.

With the announcement of new Deore components, a number of Non-Series parts get an update too. This includes a new Deore-level 2x11 36-26T crankset (FC-MT600) and 2x10 36-26T option too (FC-MT500). Along with this, a Non-Series branded version of the new Deore M6000 brakes will be offered too, under the BR-MT500 code. Expect to see these parts used on SLX-level bikes. It has only been a few months since Shimano’s wide-range XT 11-46T cassette hit the market, and now an SLX (CS-M7000) version is on the way. Designed specifically for single-chainring users (1x), the 11-speed 11-46T ratio offers a far wider range compared to the previously available 11-42T option. Exact details of this new product are currently scant, though we expect it to be a hugely popular item for riders looking to ditch the front derailleur.

The Shimano XT wheel range gets a boost, to Boost spacing that is. The Boost-spec 110x15mm front wheels are said to be stiffer with a 10mm expansion at the hub, while the rear is now available in a 6mm wider 148x12mm variant. These new wheels are much the same as previous models, but designed to fit the latest crop of mountain bikes running boost spacing.

Alivio and Acera get an update Designed for riders covering trail and urban in short-middle distances, the Alivio (M4000) and Acera (M3000) level 9-speed groups see a few changes. These changes are most notably around improving gear range and tire clearance - two issues presented through the increase of bigger wheeled 29er and Plus bikes now reaching the entry level market.

Altus gets the biggest update, going to 3x9

Looking to the base-level and it’s Altus that arguably gets the biggest update, albeit with the least information provided. New Altus (M2000) has clearly borrowed a number of features from groups above, including the addition of another gear, taking it from eight to nine-speed. A 11-36T cassette (CS-HG200-9/201-9) is designed to be used with the updated 40-30-22T crankset.

Another first for Altus sees Shimano Shadow RD technology trickle down, meaning a lower profile derailleur that should keep it out of harm’s way. This last point shouldn’t be confused with Shimanos’ ‘Shadow +’ design, with the plus referring to a chain retention clutch, that technology currently stops at Deore.

All new components mentioned above are expected to be available through retailers from May 2017. Expect these new components to appear on 2018 model-year bikes from as early as July.

Pricing details are currently unavailable and so we’ll update them when given.

To get a better idea of mountain bike groupsets, check out our article explaining what each part does, the key differences between each manufacturer and their groupset hierachy and learn more about mountain bikes in general with our Ultimate Guide to Buying a Mountain Bike article.