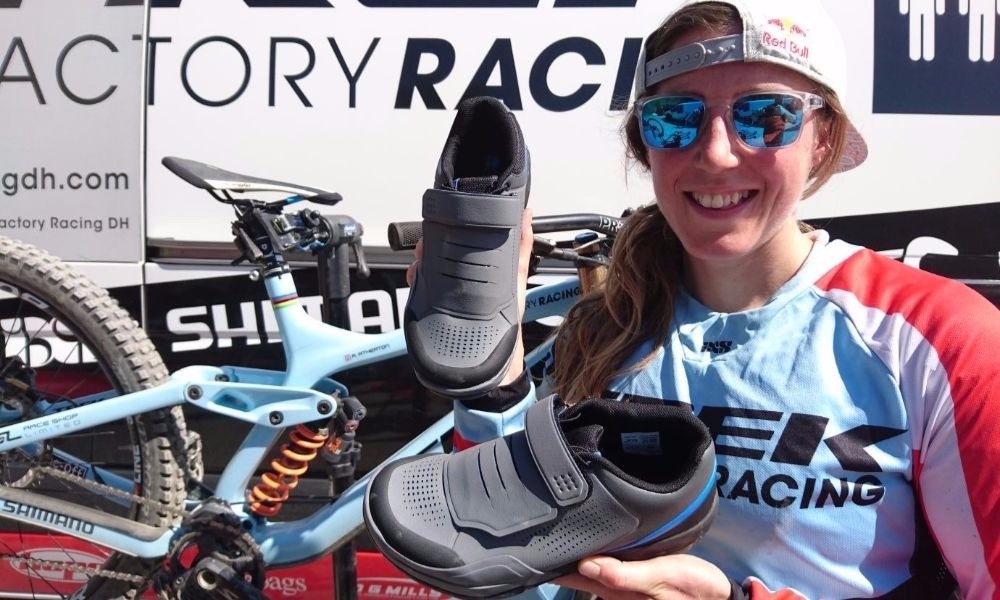 Launching today, Shimano has announced a long-awaited update to some of its mountain bike pedals and shoes. This update includes four new footwear models and four new pedals, all suited to gravity disciplines of mountain biking, including downhill, enduro, and general trail riding. We take a look at ten things to know. This new downhill and enduro-race SPD is similar in aesthetic to Shimano XTR and XT trail pedals, albeit, with one clear difference – pins. With four replaceable and adjustable traction pins per side, the new SPD pedal is reminiscent of the popular design first seen with crank brothers’ Mallet DH pedals and it’s one that allows decent traction even if you miss the clip in. Additionally, the new M820 pedal features a more obviously reinforced and wider body to better ward off direct impacts, while its width is said to be optimized for use with the wide AMR9 shoes. Stack height is reduced, something most likely achieved by keeping the SPD mechanism fixed, and not spring loaded to sit at 12.5-degrees like the M647 pedal.

The new M820 pedal is claimed to weight 546g, a respectable number when compared to plastic-bodied M647 at 568g. Details provided of these new pedals are scarce, but it can be assumed that pedals will run Shimano’s proven cup-and-cone serviceable bearing system. The pedals are claimed to weigh 493g, a small saving over the previous MX80. If you ever wanted proof of the sheer growth of using platform pedals in trail riding, the new XT flat pedals are it. The new M8040 pedals, most notably, will be available in two sizes: small-to-medium (shoe size recommendation 36-44) and medium-to-large options (shoe size recommendation 43-48). Such a concept of offering different sized flat pedals has been done recently by other brands and is something that makes lots of sense for a pedal that isn’t clipped into.

The new pedals feature 10 pins per side and there’s a slightly concave design. The pedals will be sold with optional 3mm or 5mm pins, with claimed weights at 460g (S/M) or 503g (M/L).

Without question, and much like Shimano’s XT SPD pedals, we expect these new flat pedals to be a popular seller. Lastly in the new pedal line-up is the GR-500, a pedal that’s said to take over from Shimano’s previous top-dog platform pedal, the MX80.

The new GR500 is pitched as an ‘entry-level Trail and All-Mountain riding’ platform pedal and looks extremely similar to its predecessor. The pedal offers height-adjustable pins and a sealed cartridge bearing system. It’s available in black or silver and has a claimed weight of 533g. Shimano's relatively new flagship All-Mountain AM9 shoe that was designed for aggressive downhill, enduro and trail riding has received a further update. The key changes are a revised upper that offers reduced water ingress, quicker drying and greater protection over its previous version. There's also an added molded toe cover that offers greater protection and a quick lacing cord that improves adjustability in all weather conditions.

As with the previous version, there is a lace shield providing good protection from debris, and an additional strap to provide a solid foothold. There’s a new pedal channel that sits behind the cleat that’s said to provide a more stable platform between shoe and pedal when not clipped in. The revised package is rounded out with an ultra-grippy, high traction sole, and weighs 800g for a pair of size EU42. To be priced lower than the AM9, the new AM7 removes the lace shield and offers a harder, more durable sole. It uses an ankle gaiter to offer protection and keep trail debris out. The midsole (stiffness rating: 6) is also said to be stiffer than the AM9 (stiffness rating: 5), making it more suitable for longer trail rides. It’s claimed to weigh 816g per pair (size EU42).

Sharing a number of design features with the new AM901 – such as the asymmetric raised ankle collar, armored lace shield, and molded toe cap – the all-new GR9 is built specifically for flat pedal riders.

These shoes have been designed with the new M828 platform pedals in mind, with Michelin rubber outsole designed to take hold, whether on the bike or not. The shoes are said to be lighter than the AM901’s

Not only do you get superb grip and improved walkability from the Michelin rubber outsole but the GR9 is 35g lighter than the AM9, weighing in at 730g per pair (size 42). Much like the AM7s do, the new GR700 sees the armored lace shield removed. This is said to improve heat ventilation and make it look more like a multi-purpose shoe.

These new shoes will be available in either grey/green or blue and are said to weigh 732g for the pair.

The GR7 is also available in a dedicated women’s version.

Unfortunately, details are extremely limited on this one, but we can confirm that Shimano will offer a women’s-specific version of the new GR7. These are likely to feature a specific last and smaller available sizing. And no doubt, they’re sure to be a great match with the new size-specific XT flat pedals.

Shimano states the new footwear models will be available from September 2017, with the new pedals landing in November. Pricing of all newly announced products is still to be confirmed.