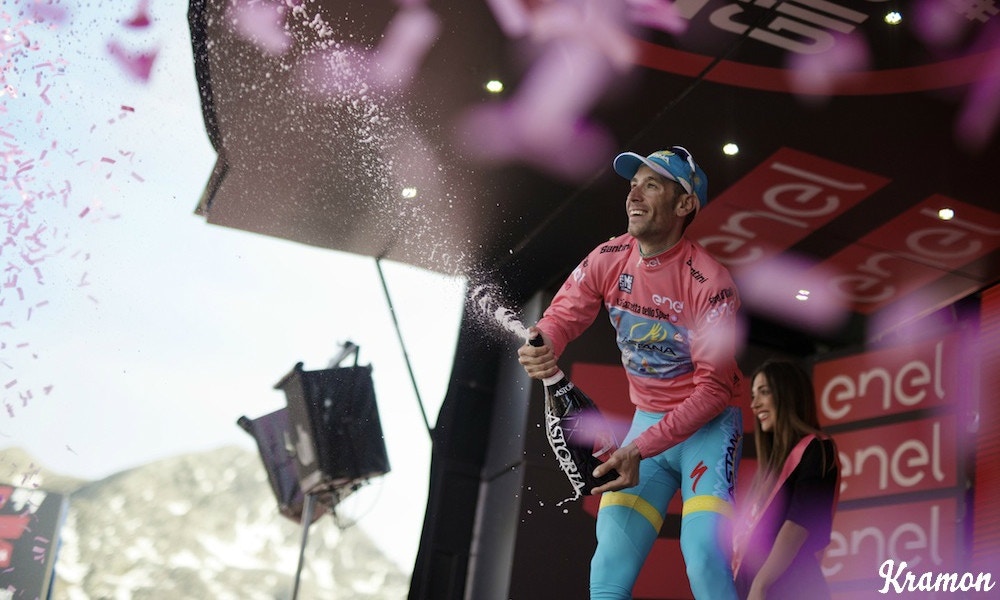 If you haven’t already, be sure to click through and check out our analysis of week one and week two.

The curse continues for Giacomo Nizzolo

When Giacomo Nizzolo (Trek-Segafredo) blasted across the finish line in Turin yesterday, it seemed as if he’d finally taken that elusive first victory in his home Grand Tour. Clad in the red of points classification leader, Nizzolo was the strongest sprinter on the race’s final stage.

But then, in the aftermath of the stage, race officials announced that Nizzolo had been disqualified from the stage for deviating from his line; for forcing Sacha Modolo towards the barriers.

“The jury decided not to give me the victory, but I will go home tonight knowing that I was the fastest today,” a frustrated Nizzolo said afterwards. Debates about the legality of his sprint aside, it’s little wonder Nizzolo’s frustrated.

Before yesterday’s stage, the Italian had no fewer than 21 top-five finishes on stages of the Giro d’Italia: 4 x 5th place, 4 x 4th place, 4 x 3rd place and a staggering 9 x 2nd place.

Nizzolo’s best shot at victory (apart from yesterday) came on stage 17 into Cassano d’Adda. With most of the top-tier sprinters gone — including Andre Greipel and Marcel Kittel, who had five stages between them — Nizzolo was among the men to beat on the mostly flat stage. He would go on to win the bunch kick, the only problem being that Roger Kluge (IAM) had somehow managed to get off the front in the closing kilometres and solo to victory. Add to that yesterday’s win-turned-disqualification and Nizzolo must be wondering what he has to do to win a stage of the Giro.

Nizzolo did win the points classification in this year’s Giro, for the second time, but we’d wager he’d trade at least one of those red jerseys for a stage win.

IAM Cycling announced during the Giro d’Italia that it was shutting up shop at the end of the season. While it’s certainly not good news for those at the team and for the rider job market generally, the announcement seemed to spark something in the team. Roger Kluge’s surprise win on stage 17 was IAM Cycling’s first WorldTour win since August last year and helped to turn an otherwise average Giro d’Italia into something worth celebrating for the team. Meanwhile at the Belgium Tour, IAM Cycling was racing to a stage win and first and second overall …

Of course, the timing of these results could be a coincidence, but knowing you’re out of a job and your team is folding at the end of the season does tend to provide extra motivation. The one good thing about the announcement of the team’s closure is that it’s still early in the year and all riders will have ample time to try and find another ride. Expect some more strong results from IAM Cycling in the months to come.

Etixx-QuickStep was the most impressive team of the Giro

The Astana team leaves Italy with ultimate bragging rights. They won the race overall and took a stage win, they won the teams classification, and they clearly had the strongest team in the mountains (Michele Scarponi was particularly impressive in his support of Vincenzo Nibali). But Etixx-QuickStep will likely leave the Giro feeling just as satisfied with their performance, and rightly so. The Belgian squad was the most versatile and well-rounded line-up in the race and the team that posted the most impressive swag of results.

They had two sprint victories (both to Marcel Kittel), one breakaway victory in the mountains (Gianluca Brambilla) and one opportunistic victory on a medium mountain stage (Matteo Trentin). In addition to their four stage victories (only Lotto Soudal managed as many), Etixx-QuickStep spent six days in the pink leader’s jersey (equalled only by Giant-Alpecin) and Bob Jungels finished sixth overall and took a massive victory in the best young rider classification.

It was a tremendous performance, particularly for a team that’s made its name as a Classics squad. And with Jungels emerging as a future GC talent, the future is bright at Etixx-QuickStep.

Things can change very quickly in the Giro d’Italia

On the final rest day of the Giro, one week ago today, Steven Kruijswijk (LottoNL-Jumbo) was leading the race by three minutes and looked set to become the first Dutchman ever to win the Italian Grand Tour. Writing at the time, we said: “For Kruijswijk not to win, based on current form, Chaves and/or Nibali will have to ride out of their skin in the next five stages and the Dutchman will either have to crash or fade dramatically.”

Sadly for Kruijswijk, he did end up crashing. And Nibali did end up riding out of his skin, but more on that in a moment.

SBS TV commentator and 12-time Giro stage winner Robbie McEwen described stage 19 as one of the most dramatic stages of racing he’d ever seen, both during and after his career. And it’s not hard to see why.

First there was Kruijswijk’s dramatic crash into a snowbank while trying to catch Nibali, Chaves and Valverde on the Colle dell’Agnello descent (see video above). Then, less than 10km later, there was Ilnur Zakarin’s even more dramatic crash which ended the Katusha rider’s time at the Giro, having sat fifth overall.

Kruijswijk fought bravely on in the kilometres after his crash, much of it solo, but the crash had taken its toll (he was later diagnose with a fractured rib). The Dutchman ended up losing about five minutes on the day as Chaves moved into the overall lead.

After what looked set to be a comfortable overall victory for Kruijswijk, the Giro had been turned on its head. And it would only continue to change the following day — the race’s last mountain stage — when Nibali went from second to first and ensured he’d ride into Turin with the pink jersey.

In the space of two stages, Kruijswijk had dropped from first to fourth, Chaves had gone from second to first and back again, Valverde went from fourth to third then back to third, and Nibali went from fourth up to first.

We wrote last week that “Just about anything can happen in the last week of a Grand Tour”. It turns out “anything” did happen.

Vincenzo Nibali came into this year’s Giro as arguably the rider to beat, despite a slower-than-normal start to the year. In our race preview we wrote: “Even if he’s a little off his best when he starts this year’s race, Vincenzo Nibali will almost certainly improve throughout the three weeks and will be difficult to beat.” And improve Nibali did. After losing time in an ill-fated attack on the stage 6 uphill finish, and after being distanced on stage 16, Nibali was nearly five minutes off the pace and overall victory seemed almost out of the question. But in a stunning reversal of form, Nibali was truly brilliant on stages 19 and 20.

When he attacked his GC rivals with 5km to go on stage 19 he was simply too strong, riding away to win the stage by nearly a minute. And on the final day in the mountains, Nibali had 45 seconds still to make up and again, when he finally made his attack, he was just too good. He put more than 90 seconds into Esteban Chaves in the space of 15km that day, securing his second Giro title and his fourth Grand Tour win in the process.

Even for fans of Chaves, Kruijswijk and others, it’s hard not to marvel at Nibali’s exploits in the final few days of this year’s Giro. It was aggressive bike racing at its very best and a ride that cements Nibali’s position as one of the very best Grand Tour riders of his generation.

Chaves and Kruijswijk have earned themselves many more fans

A week ago it was looking like second-tier GC favourites Kruijswijk and Chaves were going to take out the top two spots on the Giro podium. And while both missed out on winning the race overall, both have confirmed themselves not just as Grand Tour contenders, but also as riders that can fans can and should get right behind.

In the aftermath of his stunning crash, Kruijswijk took full responsibility, rather than looking for someone or something to blame.

“I was on my limits on the top, I wanted to eat and drink something,” he said. “I was following the rest, I made a stupid steering mistake, and I ended up in the snow bank.”

And when Chaves cracked on the final day and lost the maglia rosa, he was similarly impressive.

“I don’t want to make any excuses because we gave it everything today,” Chaves said after stage 20. “I didn’t have the legs and that’s how it happened when I got dropped.”

For Chaves and particularly for Kruijswijk, losing the maglia rosa was a devastating blow. But both did themselves a great service with the way they responded. Most excitingly, both riders showed at the Giro that they have what it takes to win a Grand Tour in the near future.

The Tour de France has a lot to live up to

And speaking of Grand Tours, it’s just five weeks until the Tour de France kicks off. Le Tour is the most important bike race and the biggest annual sporting event on the planet. And while it’s always entertaining, it’s fair to say the Tour has been overshadowed by the Giro in seasons past. This year’s Giro is being heralded as one of the greatest Grand Tours in recent memory. The shuffling at the top of the GC in the final week was an obvious highlight, but there were others. Tom Dumoulin’s stage win on home soil was great, Marcel Kittel showed that he’s back to his best, and then there was a swag of surprising results to keep things fresh: Primoz Roglic’s time trial win, Giulio Ciccone’s terrific solo win (his first as a pro), and Alexander Foliforov’s stomping ride in the uphill ITT.

And then there were the emerging youngsters, spearheaded by one of the most impressive riders of the entire race: Bob Jungels. To finish sixth overall at your first Giro d’Italia, as a 23-year-old, is a tremendous effort and one that points towards a promising future as a GC contender, not just as a gun time trialist.

The Tour de France is the big one, the race that even non-cycling fans will pay attention to. But the Giro is one for the fans and this year’s edition delivered a multitude of excitement for those who tuned in.