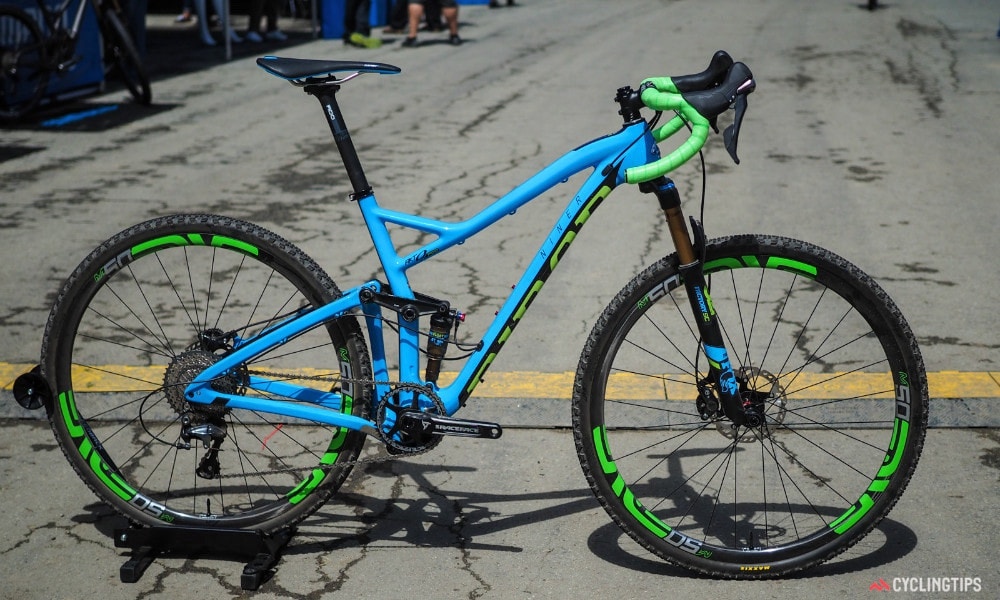 The Sea Otter Classic is America's celebration of all things cycling, an annual event offering Gran Fondos, cycling tours and racing options for the tens of thousands of visitors, along with many brands exhibiting the latest wares. The 2017 edition did not disappoint, featuring new releases from Franco Bicycles, Masi Bikes, Bont, and Stages Cycling to name a few. There were also many drool worthy bespoke creations and plenty of other things to get bike riders and fans excited.

CyclingTips were at the Sea Otter Classic covering the show live, and so we picked our favorites from their coverage here. The U.P.P.E.R from Open builds upon their highly versatile, and original gravel bike, the U.P., a relatively new bike featuring huge amounts of clearance for large tires, whilst keeping a typical road bikes geometry. As a result, these super versatile bikes can be used on or off road and are fast growing in popularity. The U.P.P.E.R is a lighter version of the original U.P, with a claimed 870g for a medium frame with clearance for 700x40mm or 650x2.1in tires. Internal cabling routing helps the aesthetic and from a functional point of view, the U.P.P.E.R is compatible with multiple drivetrain options. We think the blacked out frame looks stunning.

Pitched as Bont's entry level shoe, the Riot features a unique construction with wide toe box, carbon composite sole and redesigned wraps for a tighter fit around the heel. They also come in a variety of flashy colors. At the time of publishing, Masi hadn't officially launched this bike but it is to supplement the brand's standard rim-brake Evoluzione carbon fiber road racer. As well as it's spec'd, we couldn't get past the magnificent paint job that is described by Masi Bike product manager James Winchester as "Unicorn Blood". The colorway features on the matching headset top cover, 3T stem and KMC chain. Stages Cycling has been a big player in the power meter game with its cost effective single sided crank arm system that has provided power information to the masses. The brand has now developed a cycling computer to pair specifically with their powermeter users to provide a wide range of targeted functions and built-in diagnostics to help you keep your powermeter charged up and calibrated. Quite uniquely, the Stages Dash computer can be set up in either portrait or landscape orientations, depending on your preferences. It's easy to get caught up in the latest and greatest offerings in the road bike world, but we saw nothing as exquisite as this 'townie' bike from Shinola. The 'Bixby' steel frame uses a mix of TIG-welding and brazing, custom lugs produced in-house, leather bits (also produced in-house) and a copper finish that adds a classy touch. Some lateral thinking has created what could be a life saver. Safety Skin features thousands of tiny reflective glass beads that are mixed into a wax-based spread, which can be applied to your skin. The spread acts like a reflective strip on your clothes, making you more visible to traffic and improving safety as a result. Start them early we say, and what better way than with this 16in aluminium frame, carbon fork creation from Islabikes. The company exclusively serves the youth market in the US and UK with premium creations like this one with cartridge bearing hubs, TRP CX-9 linear-pull brakes, and three-piece aluminum cranks with titanium-axled pedals. The lightweight bike will help even the playing field a little in proportion to a child's body weight, sure to keep parents on their toes. If there's a case to be made for the bike most applicable to the bikeporn hashtag, the new Latigo RS1 from Franco has to be worth consideration. The new machine, made in Italy from premium MJ-Series carbon fiber from Japanese supplier Torayca, features custom paint and geometry options, and the one pictured above came complete with Zipp NSW 808's and SRAM Red eTap groupset.

With its lightweight aluminium construction, tool-free tray adjustments, fat bike-to-road bike compatibility, and integrated cable locks, this hitch rack from Yakima looks to be a winner. The easy to use system can cater for a wide variety of bikes in different sizes and shapes, and doesn't require additional tools for adjustment, unlike other similar models such as the Thule T2 Pro. This creation from Niner certainly caught our eye, and we're still not sure how we feel about it. The drop down bars paired with the Jet RDO dual-suspension cross-country frame is certainly unique but it seems nothing is off limits in the search for a versatile bike. The concept of the short-travel cross-country frame and road bike handlebars has some merit with the 1x drivetrain enabling the Ultegra shift lever to be used to operate the lockout on the rear shock, while the particularly short stem preserves the handling characteristics making this bike more than suitable for gravel adventures. We've spoken about the trend towards versatile bikes but the same can also be said for the 'One' helmet from Bolle. Appropriately named because panels can be added to create an aero setup for fast road riding, or removed and replaced with a visor for trail duty. Easton released a new lightweight power meter that adds only 65grams to their ultralight EC90 SL crankset. The hardware for the new power meter is housed entirely within a hollow 30mm-diameter aluminum spindle, providing single sided measurements in a similar way to Stages Cycling, 4iiii, and others. There is a micro-USB port to recharge the onboard Li-ion battery underneath a waterproof cap that provides a healthy 400 hours of run time. As on the standard Easton EC90 SL crankset, the new Easton Cinch Power version uses the version Cinch 30mm-diameter spindle format, with bottom bracket options to fit nearly every frame on the market. The only notable exception is Trek’s BB90/95. And the best part is it's compatible with 1x and standard 2x drivetrain systems and is suitable for road, mountain and cyclocross. One look around the Sea Otter displays and it was clear to see that gravel and adventure bikes were the flavour of the month. Fox has joined the gravel party by making some changes to its current 100mm-travel 32 Float 27.5 cross-country mountain bike suspension fork, providing some cushion and control for adventure or gravel bike riders. Some shorter internal parts have been fitted and the travel has been reduced to 40mm, producing the new 32 Float 27.5 Step-Cast AX fox.

The dual-chamber air spring design is designed to be extra supple in the initial stages of fork travel but still get progressively stiffer as you approach the bottom-out point. The oil damper is the same as what Fox uses on its higher-end cross-country mountain bike forks, including a three-position switch to quickly vary the firmness on-the-fly, and an additional dial to fine-tune the initial breakaway threshold to make the fork more or less sensitive, depending on rider preferences. The fork will come stock with a lightweight tooled thru-axle. The fork will only work with 100x15mm thru-axle front hubs. Schwalbe's Tire Booster is a handy piece of equipment to add to the collection, especially for those running tubeless tires. An air compressor is sometimes required to properly 'seat' a tire onto a tubeless rim, of which not all of us have. The Tyre Booster provides a quicker burst of air than what you can normally get out of a conventional pump, solving the seating and lack of an air compressor issue. Simply charge it up with a floor pump, hook it up to the valve stem, and then turn the release valve to pop the tire in place. Schwalbe says a single “charge” will work for two road or ‘cross tires.

We've saved the best for last, with Sven Nys's custom singlespeed Trek Crockett taking the Sea Otter cake. The cyclocross legend rode the bike at the singlespeed world championships and everything about it screams one-of-a-kind. There are convertible dropouts that can easily be set up for geared or singlespeed use, tire clearance is impressively generous all around, plus there’s no shelf behind the bottom bracket where mud can accumulate. Up front is Trek’s usual E2 tapered headtube and with no need for rim brake bosses, the seatstays can be left bridgeless for extra clearance. The colors on the singlespeed cog and spacers on the Industry Nine rear hub were chosen to match, die-cut vinyl decals are sealed under the clearcoat and a port on the downtube makes for easy servicing on the internally routed lines, as well as compatibility with mechanical and electronic drivetrains if gears were to be added. The Shimano Ultegra Di2 levers were gutted of their electronic bits too. A bike truly worth of such a celebrated rider.

All photos courtesy of James Huang and CyclingTips.

This article is a modified version of that originally published on cyclingtips.com. Check the full photo gallery and tech coverage for more detail.