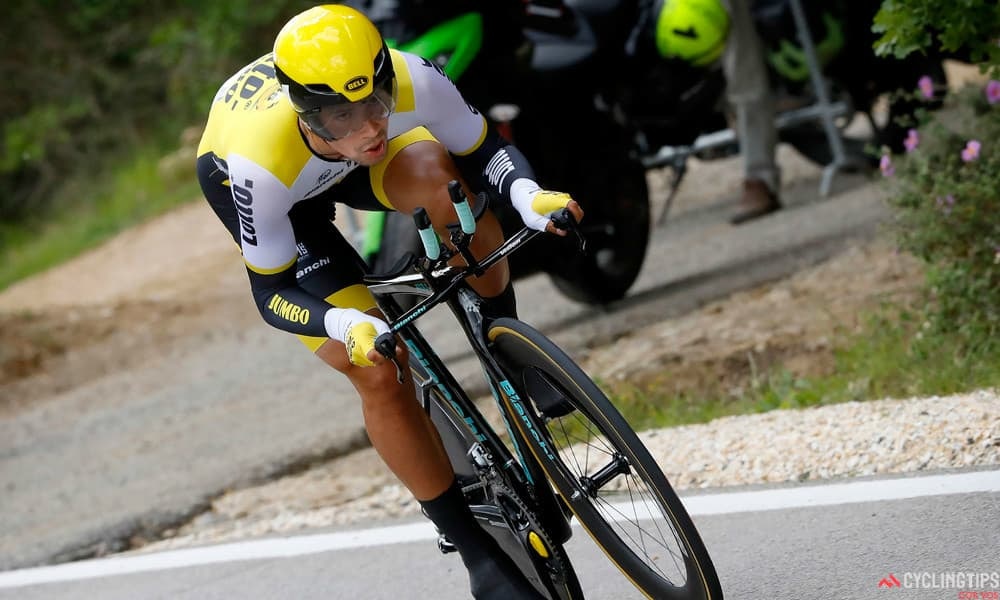 Nine days after he took second on day one of the Giro d’Italia, Primoz Roglic grabbed the time trial victory he was looking for when he was quickest on stage nine of the race.

The Slovenian from LottoNL-Jumbo went off early and set a strong time of 51 minutes 45 seconds for the undulating, technical 40.5 kilometre course in Chianti. He beat former hour record holder Mathias Brandle (IAM Cycling) by ten seconds, with Brandle’s teammate Vegard Stake Laengen a further seven seconds back in third.

Former world time trial champion Fabian Cancellara (Trek-Segafredo) had hoped to challenge but, like many of those who went after Roglic, he was hampered by wetter conditions.

The general classification contenders were even more affected by the rain, although Bob Jungels (Etixx-QuickStep) would put in a superb effort to take sixth, setting the best time of those who had been in the top 15 overall.

Teammate Gianluca Brambilla had to put in a huge effort to defend his race lead, ultimately finishing 17th. He was two minutes and five seconds off Roglic and did just enough to hold on.

The Italian ended the day one slender second ahead of Jungels in the general classification, retaining the Maglia Rosa.

“I didn’t expect this,” said stage winner Roglic. “I just wanted to do my best. In the end I also had some luck with the weather.”

Given that he competes for a Dutch team, he was asked if he would have preferred to have won in the Netherlands. He said the location didn’t matter. “Just being the winner [is what counts], it doesn’t matter where.”

The former ski jumper hasn’t been racing long, debuting with the Adria Mobil Continental team in 2013 and then stepping up to the WorldTour this year. He said that the race was his first time trial over ten kilometres. “I don’t have much experience,” he admitted. “The course was all the time up and down, left, right. Obviously I had luck with weather. I could just do my best.”

That proved more than good enough, and he has landed his biggest win thus far.

Brambilla appeared even more content, defending the Maglia Rosa. “I am really happy,” he beamed. “Today was different, of course, it was hard defending the pink jersey. I rested well last night, I woke up well. When I started my TT I had nothing to lose. I had my pink jersey on, I’ve [already] got my stage and I will do my best to defend it.”

He said that he had to strike the right balance between going fast on the descents and staying upright. “I saw riders crashing earlier in the day. It was wet, but I had to give it a go,” he stated.

The rider who had started the day second overall, Ilnur Zakarin (Katusha) had looked like a possible challenger. However he stopped with a mechanical and had to change his bike, then crashed. He fell again inside the final kilometre, and eventually trailed in 54th, three minutes 51 seconds down.

The Russian dropped to 11th as a result, and will need to fight back in the upcoming mountain stages.

Aside from Jungels, who jumped up from 14th place, Movistar’s Andre Amador made the most progress of those in the top 15. He was a solid tenth on the stage and leaped up to third overall. Vincenzo Nibali (Astana) performed solidly with 19th on the stage and remains fifth, while Alejandro Valverde was 11 seconds slower in 22nd and slips from fourth to sixth.

Former race leader and stage one winner Tom Dumoulin didn’t challenge for the win, netting 15th, but improves his GC position from 11th to fourth.

Sky’s Mikel Landa also progresses thanks to a solid 20th in the time trial and is up two places to eighth. However Domenico Pozzovivo (Ag2r La Mondiale) and Colombians Esteban Chaves (Orica GreenEdge) and Rigoberto Uran (Cannondale) were 48th, 51st and 64th in the race against the clock, causing them to slip back to 12th, 13th and 15th respectively.

Like the other climbing specialists, they will hope to push towards the podium in the mountains.

Jungels is a bigger rider and may struggle to hold their wheels in the high altitudes, but is pleased with his second overall this evening.

“I did the recon of this time trail after Strade Bianche,” he told Eurosport. “And we had a video. I knew it pretty well. Of course with the conditions that changed, that changed things a lot for the stage victory.

“I knew it would suit me. It was quite a hard time trial. There were two long climbs where you needed some power. I took quite some risks in the descent and I am happy with my re-entry into the top three.”

Just over a week after the first race against the clock, the time trialing theme returned on stage nine of the Giro d’Italia. Beginning and concluding in Chianti, the riders would duel it out over a 40.5 kilometre course, with the undulating and technical roads making it a difficult time in the saddle. The race commenced without double stage winner Marcel Kittel, who decided not to start, as well as three riders who were outside Saturday’s time limit. They were Boy Van Poppel, Iuri Filossi and Sky sprinter Elia Viviani.

Early on former world hour record holder Matthias Brandle (IAM Cycling) set the fastest mark, covering the course in a time of 51 minutes 55 seconds. This was far ahead of Gazprom-Rusvelo’s Artern Ovechkin, who was almost three minutes back with his 54 minutes 41 seconds.

Jack Bobridge (Trek-Segafredo), another hour record veteran, was fourth in 55 minutes and 10 seconds.

Ovechkin was bumped down to third by the arrival of Maarten Tjallingii (LottoNL-Jumbo), but he was one minute and six seconds adrift and was never really a threat to Brandle.

Fabian Cancellara was out on the course but the Trek-Segafredo rider was in much wetter conditions than Brandle and was off the to place. He was 18 seconds behind at the finish, taking a provisional second place. Katusha’s Anton Vorobyev slotted into third.

Soon afterward Vegard Stake Laengen (IAM Cycling) raced in for second, displacing Cancellara. The Swiss rider was then shunted off the podium when LottoNL-Jumbo’s Primoz Roglic went fastest. His time of 51 minutes 45 seconds was ten seconds quicker than Brandle and was a superb effort.

He is a former ski jumper and had earlier taken second place in the opening time trial of the race.

The rain eased off and the drying conditions made things safer for the riders yet to come. However those finishing were far off Roglic’s time, putting him firmly in the hot seat.

With the GC contenders going off later in the day, many big names were yet to get going. Those starting at this point included former race winner Ryder Hesjedal (Trek-Segafredo), trying to get his race back on track after losing time in the first week.

Best young rider Bob Jungels (Etixx-QuickStep) and former race leader Tom Dumoulin (Giant-Alpecin) were two who are known for their strength and were on Roglic’s radar as challengers. Meanwhile Sky’s Mikel Landa was keen to post a good ride and got underway, seeking to fight back from tenth overall.

Jungels was going very fast early on and was second-quickest at the first time check. However Andrey Amador (Movistar) was the most impressive, following Jungels through that same check and going fastest. The conditions had become wetter again, though, making it tough for Amador and others to challenge Roglic’s finishing time.

Dumoulin had said he would try to bounce back from Saturday’s disappointment but was 15 seconds behind Amador at that early mark. Landa was a further 16 seconds back.

However Amador’s momentum faded between the first and second time checks, and he was 25 seconds adrift there. Dumoulin was further in arrears, passing through that point 50 seconds down and bidding goodbye to any chance of a stage win.

All the riders were out on the course at that point, including race leader Gianluca Brambilla (Etixx-QuickStep). Meanwhile Hesjedal was finishing, and was almost three minutes off Roglic. Jungels was far faster, being just was 45 seconds off the best time. He had set a pace that could potentially put him in the frame for the pink jersey.

Early leader Amador’s hopes of taking the stage had faded and he came in tenth, one minute 19 seconds behind Roglic.

The race for the Maglia Rosa continued to rage. Zakarin had been going well at the first time check but was 55 seconds back at the second, two seconds quicker than Valverde. The Spaniard was riding well out on the course, as was Vincenzo Nibali.

Dumoulin came through to finish his effort but the bucketing rain didn’t do him any favours. The opening time trial winner finished back in 15th place, one minute 58 seconds back.

Meanwhile Zakarin had run into problems and, after a bike change, was pushed back up to speed by a Katusha mechanic.

The Russian’s difficult time trial continued a short while later with another bike change. Ripped shorts pointed to a crash and derailed his chances of taking over the pink jersey.

That fall plus the crashes suffered by other riders underlined the need for caution and many of the GC contenders were holding back on the corners. However that didn’t explain Rigoberto Uran’s disappointing performance, with the Colombian rolling in a provisional – and distant – 58th in the test, four minutes and 12 seconds back.

In contrast Nibali was better, racing in for 18th. He was two minutes 13 seconds back, while Valverde was three places and 11 seconds further behind. That too was a solid ride from someone more at home in the mountains.

Zakarin wasn’t faring so well. Already stopped twice, once from a crash, he hit the deck again inside the final kilometre. To add insult to injury, he unshipped his chain and faced a further delay before getting going again. He ultimately rolled in three minutes 51 seconds back, dropping from second to 11th overall.

Race leader Brambilla was riding much more solidly, rounding that last corner without problems and crossing the line 17th, two minutes and five seconds back. This just about held off team-mate Jungels, keeping the Italian in pink for another day and continuing a fine Giro for him and his team.

With the first two places in the general classification, Etixx-QuickStep have much to celebrate, and will have high morale heading into the second rest day.

The race’s second rest day takes place on Monday and gives the riders a breather before some big battles in the high mountains. The Giro results on Tuesday with a 219 kilometre race from Campi Bisenzio to Sestola. While the summit finish is not terribly long, the constantly undulating roads could shake things up again.