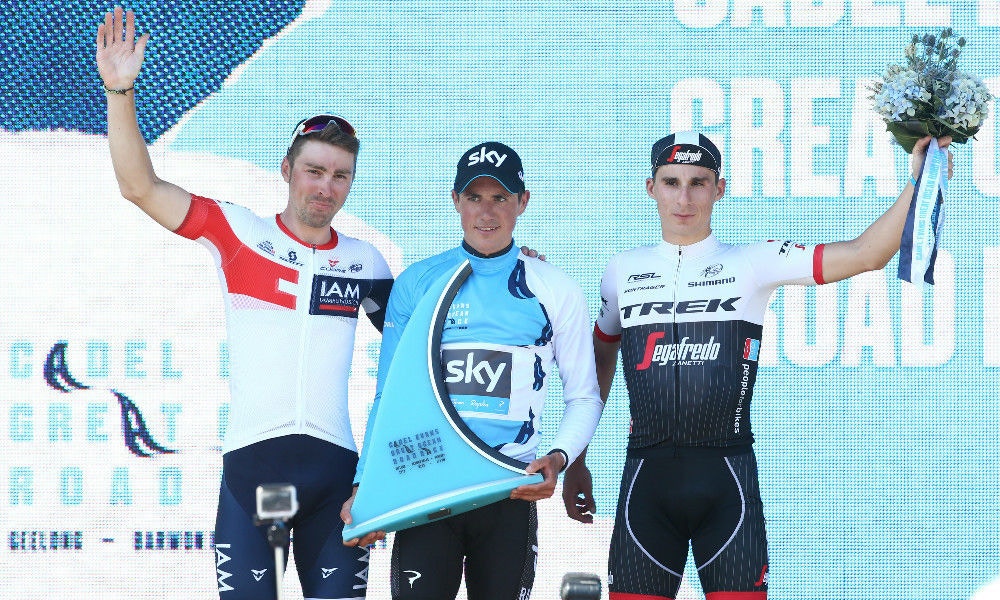 GEELONG, Australia (CT) – British national champion Peter Kennaugh (Sky) has soloed to victory in the second edition of the Cadel Evans Great Ocean Road Race, attacking in the final of three laps around Geelong and holding on for an impressive victory.

Kennaugh attacked on the lower slopes of the steep Challambra Crescent climb with 13km left to race, catching Spanish climber Rafael Valls (Lotto Soudal) who was leading the race solo having dropped his breakaway companions just moments before.

Kennaugh crossed the top of the climb on his own, then time-trialed his way over the two remaining climbs and on to the finish on the Geelong waterfront.

While the Manxman looked comfortable in the closing kilometres, he revealed after the race that he’d been struggling throughout. He decided to attack on Challambra Crescent, figuring others would be similarly uncomfortable.

“My legs didn’t feel good at all,” Kennaugh said. “They didn’t feel good all race but it just seemed like everyone else was starting to get tired and I kind of felt the same. So it was my last opportunity to win the race on that climb because I knew it was all about riding for Luke Rowe or Ben Swift [after that] so I just gave it everything and didn’t look back.

“Sometimes it works; sometimes it doesn’t. Today it did. I’m very happy.”

Kennaugh animated last year’s inaugural edition of the race as well, attacking solo a long way from the finish and getting caught soon after. That experience, plus some timely advice from teammate Luke Rowe, helped Kennaugh time his run to perfection this time around. “Luke was always on the radio to me … Throughout the whole race and even all leading up to this race: ‘Do not do anything until the last lap.’ Last year I came through here with three and half laps to go, off the front on my own, with about 80km to go. He is good for that.”

While Kennaugh was able to open a sizable lead after his attack, it wasn’t until the final kilometre that he knew he had the race wrapped up.

“[The gap] was always kind of at 20 seconds and then it dropped to 15 but once I got over that final climb and turned left and got on to the straight downhill, I kind of thought: ‘They’re going to have to bring it back now. If I’m still away in a couple of k’s time it’s all over.’

“So I just tucked my head down, daren’t look back because I thought if I looked back and [saw] them that could be it. So I just gave it everything to the line and it was only on that final straight down here that I thought ‘I’ve got it’.”

The aggression started as soon as the neutral zone ended, with a succession of riders trying to establish the early breakaway. But each group was quickly chased back as quickly as it had formed. Mitch Docker (Orica-GreenEdge) crashed 14km into the race but was soon back in the peloton and on the front of bunch controlling the pace for Orica-GreenEdge.

No break was allowed to get clear until just before the first intermediate sprint in Barwon Heads after 24km when Pat Lane (Avanti IsoWhey) punched out of the peloton to take the maximum points. Alessandro De Marchi (BMC) bridged across to Lane a few kilometres down the road and as the race headed across to Thirteenth Beach, Josh Berry (St George Merida) and Adrian Hegyvary (UnitedHealthcare) joined the breakaway as well.

The leaders’ advantage quickly grew as the peloton eased up and when Kristian House (One Pro Cycling) and Morgan Smith (Kenyan Riders Down Under) joined the lead, the gap was more than six minutes after 55km of racing.

Lane took the second intermediate sprint from the break, and then took the KOM points on offer at Bells Beach as well, setting him up to win both the sprint and KOM classifications. Back in the peloton, Orica-GreenEdge was doing much of the chasing, with Trek-Segafredo pitching in as well.

A crash after 74km saw Caleb Ewan (Orica-GreenEdge) and Brodie Talbot (St. George Merida) hit the ground. Both got back on and continued riding but would ultimately abandon the race.

With 84km complete the gap was down to five minutes and falling. A further 10km up the road and with 80km still to race, Smith was dropped from the breakaway leaving just five out front. Hegyvary was dropped as well as the race returned to Geelong for the first half-lap of the finishing circuit.

Adam Phelan (Drapac), Gert Dockx (Lotto Soudal) and George Bennett (LottoNL-Jumbo) were among the aggressors in the peloton on approach to the final three laps, but none of the moves were able to stick.

With 60.6km and three laps of the finishing circuit remaining, the four leaders had 2:40 over the peloton. On the Challambra Crescent climb, Lane and De Marchi distanced the other two breakaway riders as Lane added to his lead in the KOM classification at the top, 52.8km from the finish. A chase group of 12 riders formed on the Queens Park Road/Melville Avenue climb — the second of the finishing circuit’s three climbs — with Jack Haig (Orica-GreenEdge), Danilo Wyss (BMC), Rein Taaramae (Katusha) and Salvatore Puccio (Sky) among the riders featuring. When the race reached the Geelong waterfront with two laps and 40.4km to go, that chase group was 1:25 behind the two leaders (Lane and De Marchi) with the peloton a further 15 seconds behind.

On the approach to the second ascent of Challambra Crescent the chasing group was absorbed by the peloton with the two leaders just in sight. Pat Lane was dropped by De Marchi just as Danilo Wyss (BMC) made a move from the peloton, joining his teammate on the climb.

Over the top of that climb, with a touch over 30km remaining, another 10 riders joined Wyss and De Marchi off the front, including 2015 Tour of Oman winner, Rafael Valls (Lotto Soudal). Valls would attack on the short but steep Queens Park Road/Melville Avenue climb, being joined a few kilometres later by Cameron Meyer (Dimension Data) and Salvatore Puccio (Sky).

Behind the three leaders a four-rider chase group was coming together with Damian Howson (Orica-GreenEdge), Alexis Saramotins (IAM) and Leigh Howard (IAM) joining forces. They were soon joined by newly crowned New Zealand road race champion Jason Christie (Kenyan Riders Down Under) after a brief salvo from the Kiwi.

At the start of the final, 20.2km lap, Meyer, Valls and Puccio had a 19-second lead over the four chasers with the peloton a further 10 seconds behind. The chase group would be caught two kilometres up the road by the reduced peloton but it was on the final ascent of Challambra Crescent that the race would be decided. Valls attacked from the three-rider lead group at the bottom of the climb but just behind him, Peter Kennaugh was coming to the front of the peloton and making a move of his own. Kennaugh caught Valls on the steep slopes of the suburban street with 12.4km to go, before crossing the top of the climb solo.

The Manxman quickly opened a gap of 20 seconds; a gap he was able to hold most of the way to the finish. Adam Hansen (Lotto Soudal) attacked from the chasing peloton with 4.6km to go as IAM and Orica-GreenEdge chased hard to bring it all back together.

While Hansen was caught, 26-year-old Kennaugh continued on to the finish alone, taking his first win of the year and the sixth UCI-classified victory of his career.