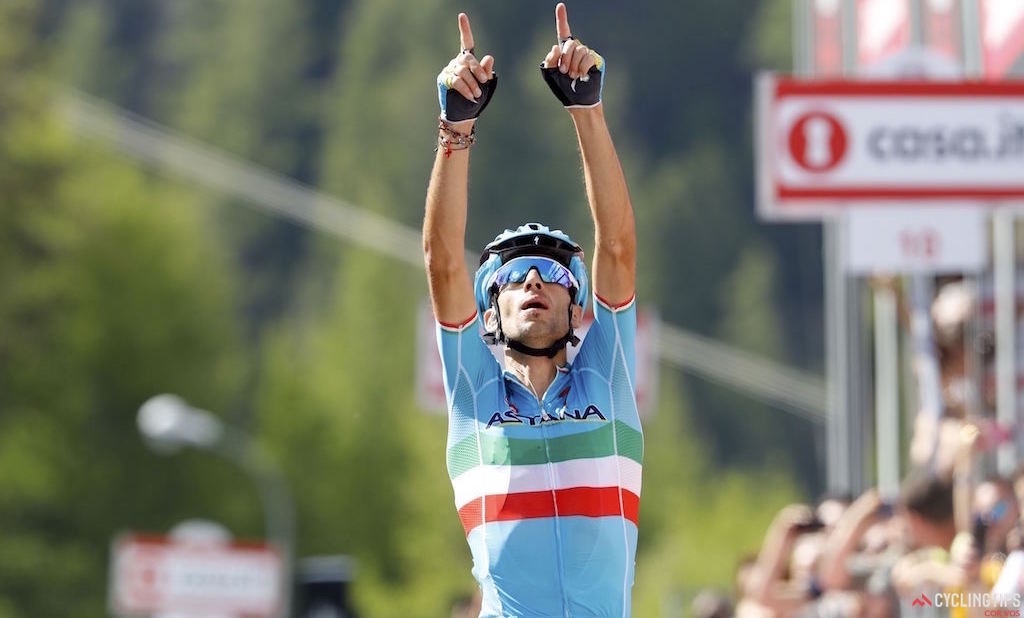 It’s not over until it’s over.

It’s a cliché, but is a cliché for a reason, and it was proven true Friday on Stage 19 of the Giro d’Italia, where the general classification was completely upended in one of the most dramatic days of Grand Tour racing in recent memory.

At a Giro that seemed to have its GC winner decided with only three stages remaining, a mountain stage that included the climb over the Colle dell’Agnello, this year’s highest pass at 2744 meters (9000 feet), and the uphill finish at Risoul in France, changed everything.

There were tears from stage winner Vincenzo Nibali (Astana), who has struggled throughout this Giro but suddenly found form in the final days to take the stage win and ride his way into second overall.

There were tears from new race leader Esteban Chaves (Orica-GreenEdge), who at age 26, became only the third Colombian in history to wear the race leader’s Giro d’Italia.

There were tears from former race leader Steven Kruijswijk (LottoNL-Jumbo), who crashed heavily into a snow bank on the descent of the Colle dell’Agnello. Though he was able to remount, the Dutch rider was isolated, and watched his dream of becoming the first Dutchman to win the Giro evaporate.

And there, were no doubt, tears from Russian Ilnur Zakarin (Katusha), who crashed further down the Colle dell’Agnello, and abandoned his fifth-place on the classification due to a broken collarbone.

Spaniard Alejandro Valverde also suffered greatly, dropping from third overall in his first Giro to fourth, 43 seconds behind Kruijswijk and likely out of reach for the final podium — though, at this Giro d’Italia, the term “likely” is all relative. Vincenzo Nibali (Astana) and Esteban Chaves (Orica-GreenEdge) on the Colle dell’Agnello during Stage 19 of the 2016 Giro d’Italia, from Pinerolo to Risoul . Photo: LB/RB/Cor Vos.

“I’ve won on rage today,” Nibali said. “It hasn’t been easy to handle everything that has happened over the past few days. I dedicate this victory to Rosario [a young pupil of Nibali’s who died two weeks ago]. I’m very happy. It’s been a terribly hard stage. I want to keep my feet on the ground. There’s another hard stage to contest tomorrow”.

Chaves fought until the end finishing 53 seconds behind Nibali to move into pink. He leads the Giro by 44 seconds with one more mountain stage remaining.

“I think it was the hardest say of the race for me, but more importantly, I took the maglia rosa,” Chaves said, wiping away tears. “I’m really happy. Today, my team’s work was unbelievable. Ruben [Plaza] waited for me, then pushed on like a real machine. In the final I tried, but Nibali was stronger. But I took the maglia rosa, and we will try to defend tomorrow.”

“Steven showed his fight for the maglia rosa. Unfortunately he crashed — sorry, mate — but it is like this. The race was going. Nibali was descending very fast. Steven made a mistake, and it came with a big cost for him.” The 19th stage of the Giro d’Italia kicked off the final days of the race in dramatic fashion with the Colle dell’Agnello, this year’s Cima Coppi, taking the riders to 2,744 meters before a finish at Risoul in France.

With many teams no longer contending for the general classification, the fight to get in the breakaway was massive. The peloton averaged 51kph in the first hour of racing with a breakaway not established until the riders were on the lower slopes of the Colle dell’Agnello with 80 kilometers to the finish.

LottoNL-Jumbo led the pace up the climb, as the peloton thinned to the elite climbers of the race.

Scarponi attacked the leaders 7km from the summit, perhaps thinking of crossing the summit first, with a sizable monetary prize available.

The GC contenders continued to pick up riders as the breakaway blew to pieces on the tough climb. Due to the high altitude, mist engulfed the riders.

A kilometre from the summit, Valverde cracked as Chaves accelerated, trying to dislodge the maglia rosa. Nibali followed the move with no trouble, clearly on a good day after losing considerable time on stage 16 into Brixen-Andalo.

Scarponi took the prize at the top of the climb with 56km to go, as Nieve led a chase group over the top nearly a minute and a half behind.

The GC trio of Nibali, Chaves, and Kruijswijk went over the top 4:50 behind the leaders, followed shortly thereafter by Valverde, Rafal Majka (Tinkoff), and Zakarin.

Chaos ensued on the French side of the Colle dell’Agnello. On one of the first corners Kruijswijk misjudged his speed and front flipped into a snow bank. Remarkably he stood up, mostly unscathed, except for a few scrapes on his arm.

Valverde and company flew by the leader, as Kruijswijk worked with neutral service to get his bike rolling again. He would end up changing his bike a couple of kilometers later.

With no teammates and no one else in sight the maglia rosa was forced to ride alone doing all of the work. If he could make it back to the other GC contenders his legs would definitely pay a price, but that would have been a best-case scenario.

The route traveled downhill until the riders began the finish climb to Risoul with 13km to the finish. The high speeds would make closing any gaps extremely difficult.

A scary moment ensued on the descent as Zakarin, fifth overall at the beginning of the stage, was seen laying on the ground several meters from where his bike lay. His front wheel was nowhere to be seen.

After receiving medical assistance, his team reported via Twitter that he was conscious and had a suspected broken collarbone. The collarbone break was later confirmed, as well as a broken scapula.

Monfort joined Scarponi in the lead, but the 2011 Giro champion soon dropped off the front, ordered back to help Nibali who chances of overall success were increasing by the kilometer.

With 25km to go, Montfort lead Chaves and Nibali by 3:00, with Valverde and Majka in another chase group a further 1:20 behind. The maglia rosa had teamed up with Bob Jungels (Etixx-QuickStep), the race’s former leader and best young rider, but Kruijswijk was over two minutes behind Chaves and Nibali.

The Nibali and Chaves group continued to pick up riders from the original breakaway until only Monfort was in front of them. At the bottom of the climb to Risoul, Monfort was reeled in, and Nibali attacked with only Chaves and Nieve able to follow.

The gap to the maglia rosa was inching toward three minutes, the same advantage Kruijswijk had over Chaves to begin the stage.

Diego Ulissi (Lampre-Merida), one of the riders who had been in the original breakaway, briefly bridged to the leaders, but could not sustain the pace.

Nibali attacked Chaves and Nieve with 5km to go with the Colombian only able to follow. Another attack quickly thereafter dislodged Chaves. Valverde was still around two minutes behind at this point, while the maglia rosa was over three minutes back, making Chaves the virtual leader.

Nibali powered all the way to the line, fighting for every second. The Sicilian pumped his fist across the line and raised both hands in triumph. He had stormed back into contention with one mountain stage to go before the final procession into Torino.

Nieve gapped Chaves in the final hundred metres, stealing precious bonus seconds from him. Nieve finished at 51 seconds, with Chaves at 53 seconds.

Valverde and Majka came across the line 2:14 behind alongside Rigoberto Uran (Cannondale), the two-time Giro runner-up who seemed to find his climbing legs a little too late in this year’s race. Finally, the maglia rosa slowly rolled up to the finish line, his body drained of all energy, unable to fight for precious seconds. Kruijswijk finished the stage 4:54 behind Nibali, and still holds onto hope of finishing on the podium, as he dropped to third overall.

Chaves now leads the overall by 44 seconds over Nibali, with Kruijswijk in third at 1:05 behind. Valverde slipped one spot to fourth at 1:48. With the abondonment of Zakarin, Majka now sits fifth overall, but is nearly four minutes down.

There will be fireworks galore Saturday on the final day to decide the general classification of this year’s Giro d’Italia. The penultimate stage from Guillestre to Sant’Anna di Vinadio looks like a shark’s mouth with three massive climbs packed into 134 kilometres.

The short stage features a remarkable 4,100m in elevation gain, with a sequence of four climbs and three descents — with no flat stretches in between. The route climbs up Col de Vars (19km), Col de la Bonette (22km), Col de la Lombarde (20km) and the final 2.3km leading to the Sant’Anna Sanctuary. The roadway only narrows along the technical descent from Col de la Lombarde, all the way up to the last 2.3 kilometres.

Michael Better contributed to this report.