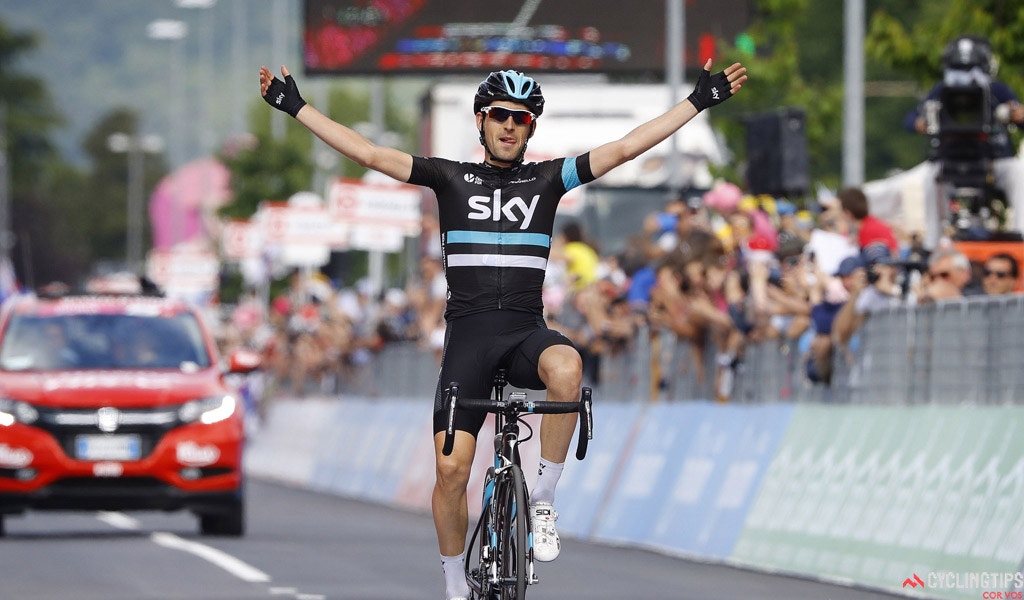 Mikel Nieve gave Team Sky something to smile about after what had been a very tough Giro d’Italia, winning stage 13 of the race with a super solo ride to Cividale del Friuli.

The Spaniard was part of a move that pushed ahead inside the final 35 kilometres. He, Joe Dombrowski (Cannondale) and Giovanni Visconti pushed forward on the climb of Cima Porzus, with Nieve topping the summit alone and time trialing to the final ascent, that of Valle.

Visconti did what he could to bridge on that climb but Nieve had a 47 second advantage at the summit. With just 13.1 kilometres left from there, he had a strong chance of taking the stage, and held on all the way to the line.

He reached it 43 seconds ahead of a disappointed Visconti, while Vincenzo Nibali outsprinted Alejandro Valverde for third, one minute 17 back.

Crucially, race leader Bob Jungels had been dropped on the final climb. Despite a furious chase the Luxembourger rolled in too far down. Andrey Amador (Movistar) had started the day second overall, just 24 seconds off pink. While he too was dropped on that final climb, he was able to rejoin the Nibali/Valverde group on the descent and thus took over the race lead.

Nieve had started the race set to ride for Mikel Landa, but his compatriot was forced to drop out due to illness. This gave him motivation to try to turn things around.

“With Landa gone it was very disappointing. Of course the Giro team was a little low on morale,” he said. “We wanted to win stages and we managed to do that today, so it was good."

“After getting in the break, I found myself in good form. I was very good climbing but of course the descent were complicated. Thankfully I managed to get down on my own – it is better than being with someone else and it worked out.”

Amador made history in becoming the first Costa Rican to lead a Grand Tour. “I didn’t really imagine it,” he admitted. “I didn’t think it could happen. I am really happy to have this jersey."

“I am not a real climber. I didn’t have the legs as much as I wanted today, but Alejandro is really strong.”

He dedicated the win to his countrymen, saying that they had always supported him. “It is a beautiful way to get young people interested in cycling.

“We knew that the first day in the mountains was going to be hard. We expected what happened, we wanted to get someone in the break. The team couldn’t have done a better job, they were superb today. In the end Alejandro was really strong.”

Jungels is now 26 seconds back and accepted the result.

“It has been a really, really hard stage since the beginning. Astana was beating things up on the second last climb, I was definitely tied on that."

“With my bodyweight, I think it is hard to keep up with the climbers on these grades. I said to myself to stay as close as possible and then had Brambilla to help me. We tried to limit the losses as much as possible.”

Asked if he thought it was necessary for him to lose further weight to become a Grand Tour winner, he said he would wait to see how his career evolved. He is still only 23 years of age, after all.

“I am pretty convinced that you cannot change your body. Either it comes with the yers or not,” he said. “I will just continue like this. I can consider myself now a pretty good bike rider. Despite my weight I don’t climb so bad. I will just see how this Giro continues.

“There are some stages that might suit me better, so we will see. I am not a defensive rider, so you never know.”