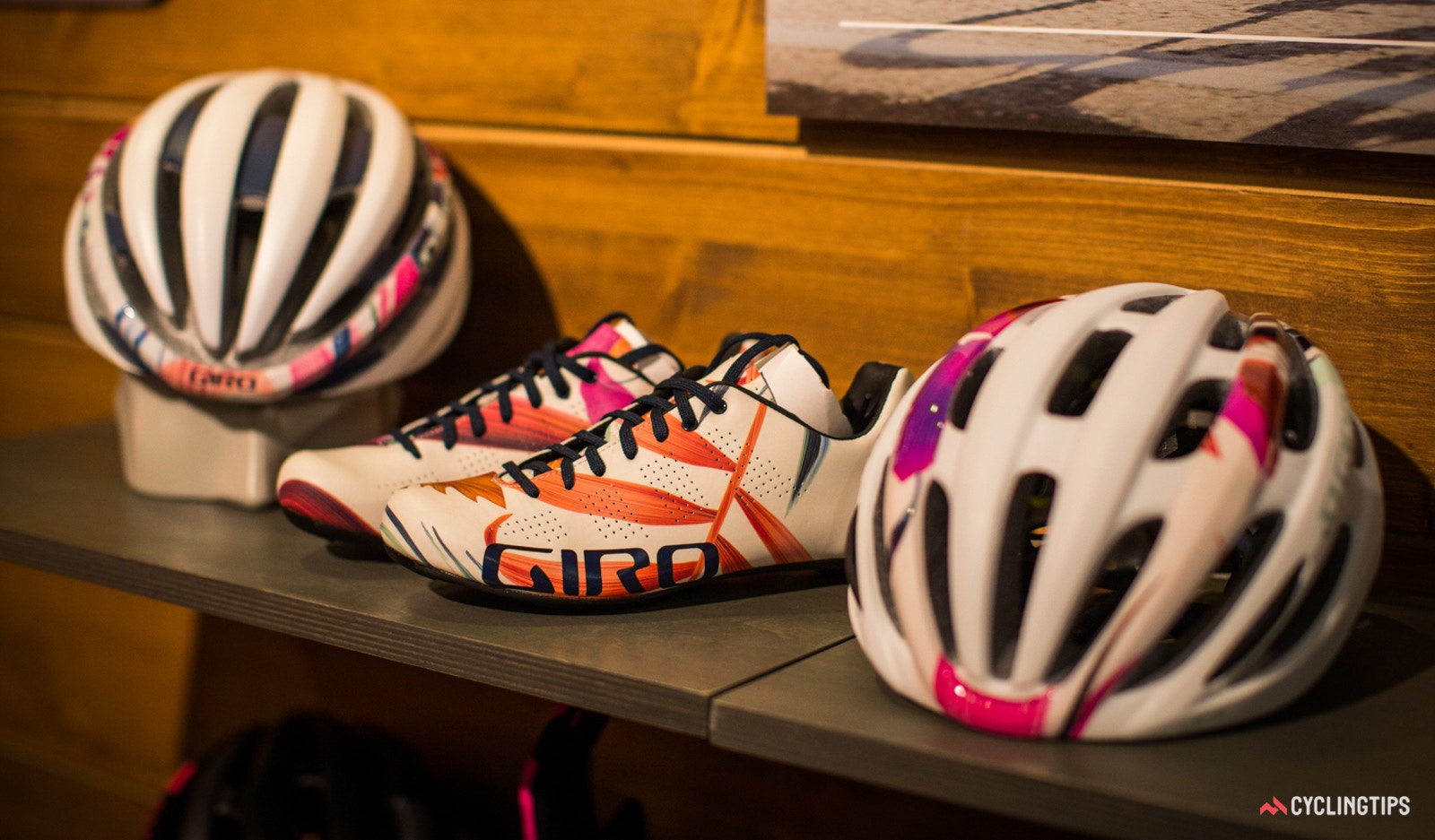 The 2017 edition of the Eurobike trade show wrapped up recently, and along with it, our live coverage of the best and brightest bikes and gear to catch our collective eye as we roamed the halls of the Messe Friedrichshafen.

So what are we doing here now, you ask?

Well, as it turns out, our staff found far more of interest than we could realistically display in just three days, so we’ve gathered up the most interesting of the images that remain and are presenting them to you here.

Keep in mind that just because we didn’t get to this stuff last week doesn’t mean it’s less worth of coverage. In fact, we think you’ll find plenty here to whet your appetite. 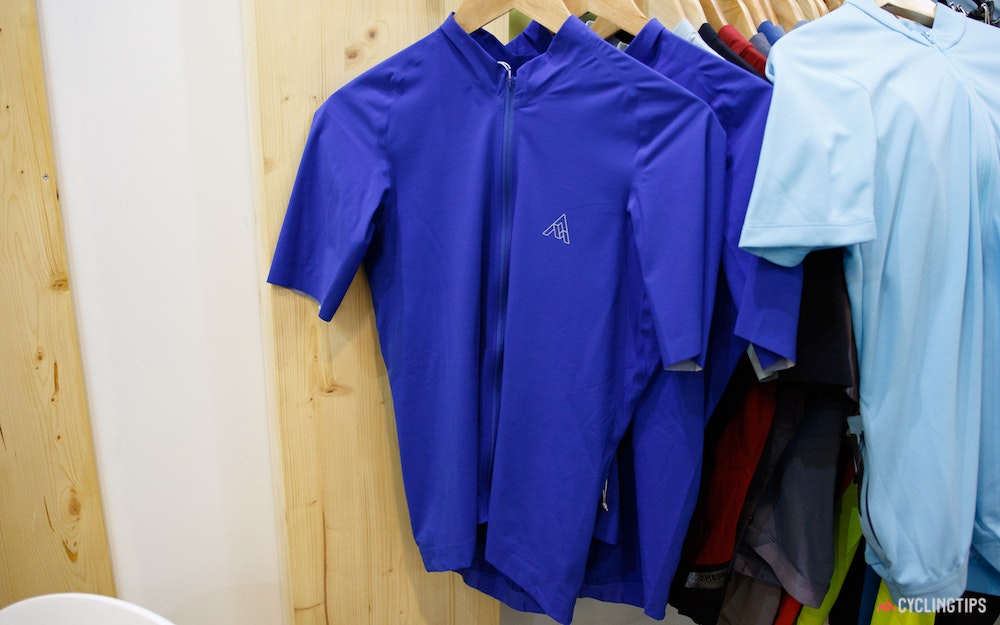 For those coming into summer, 7Mesh’s Highline jersey is worth a look. Its aero cut uses ultrasonic welded seams for a skinsuit-like fit. The material has an impressive amount of stretch, five pockets at back (two are zippered), reflective details, and is even treated to a DWR coating to ward off light showers. Photo: David Rome. 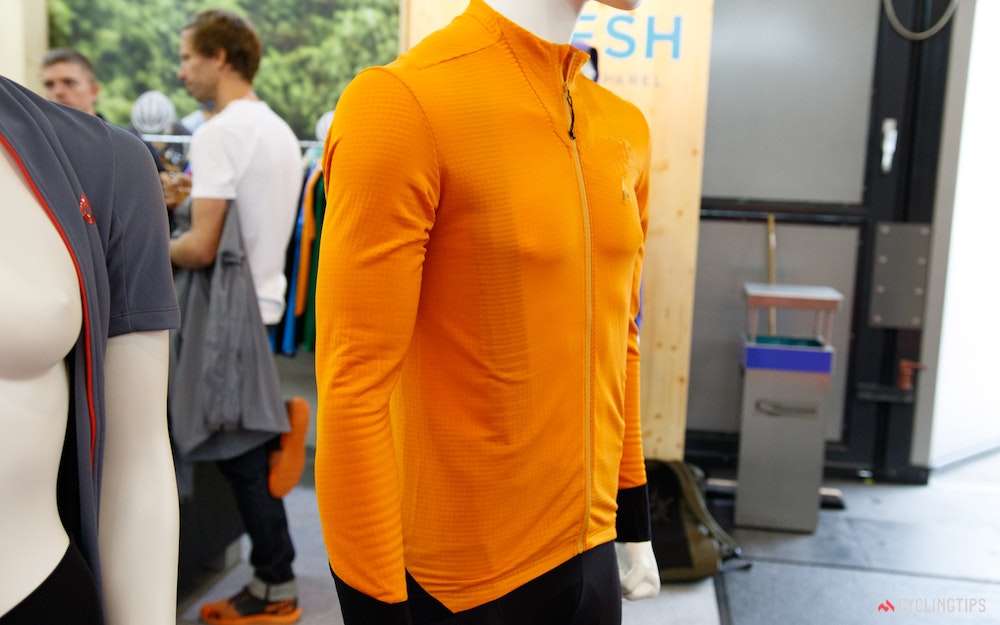 Another Canadian brand, 7Mesh is making some impressive clothing of late. For example, the Mission is a lightweight, breathable, and warm jersey designed to be worn beneath a thin shell jacket or a base in cold conditions. It’s made using PolarTec Power Grid material with air insulating channels. Photo: David Rome. 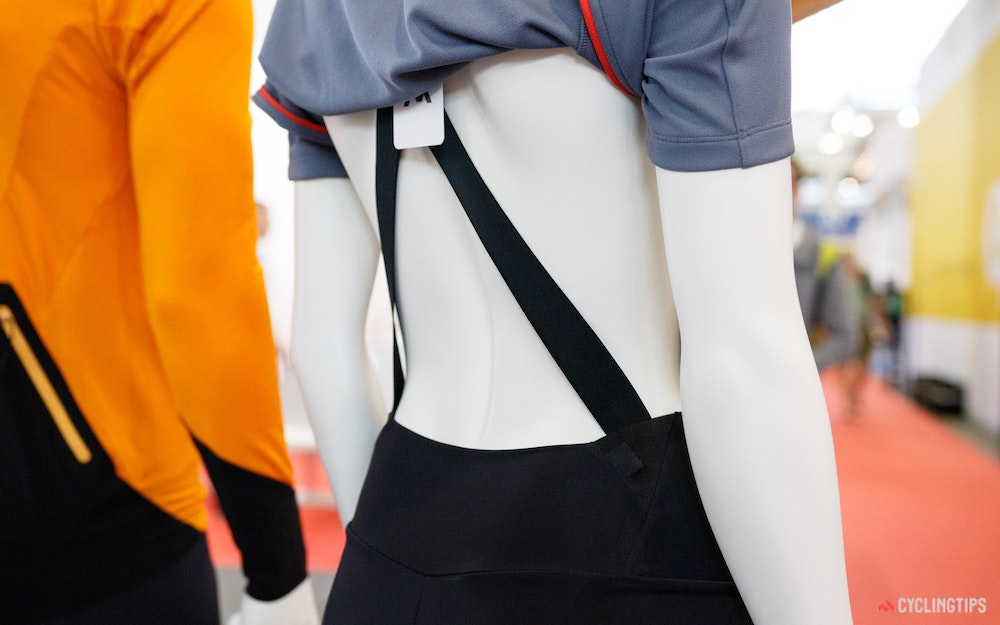 Expected around March 2018, 7Mesh is working on a new women’s bib short (model WK2) that offers a special chamois, subtle slimming details, and a strap design that can be pulled down for nature breaks. Photo: David Rome. 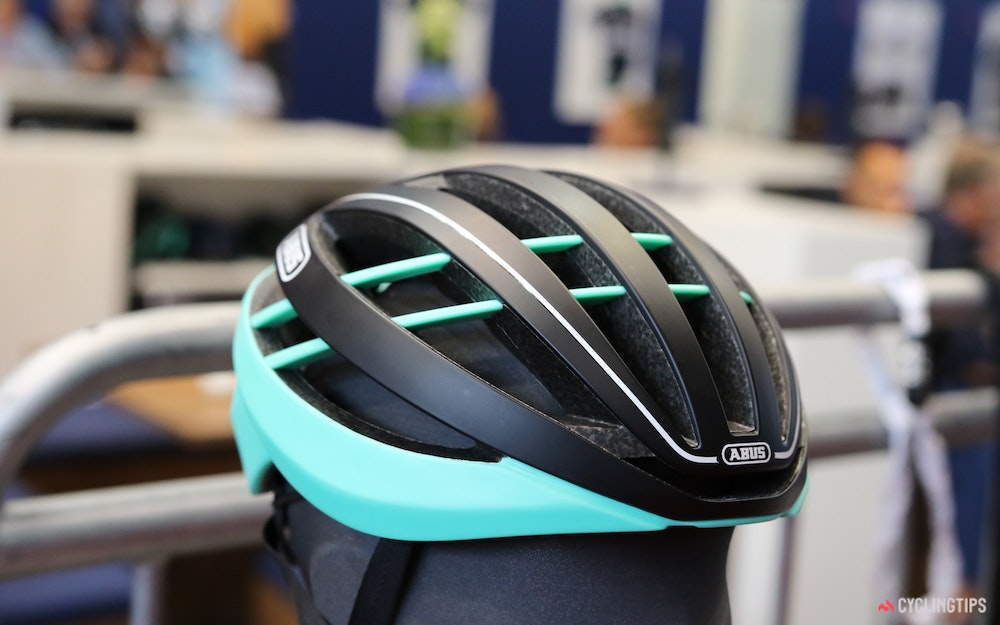 The Abus Aventor helmet is made with pure ventilation in mind with a claimed 40% of the helmet’s surface area being vents. The 240g helmet is cage reinforced (structure within the foam) and features a new adjustment system that plays well with long hair. Photo: David Rome. 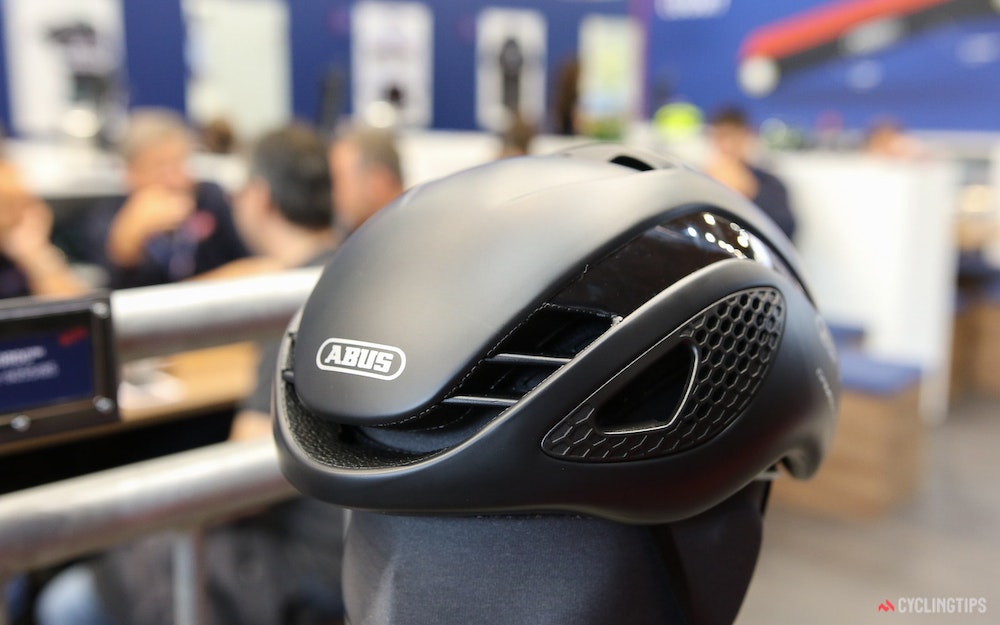 Certainly best known as a lock company, Abus has also been offering helmets for some time now, too. As used by Movistar, the Gamechanger is Abus’ new wind tunnel-tested aero lid. The helmet features clever ports and channeling to store sunglasses at the rear of the helmet, while the front is left open to let air in. The helmet has been designed to be more breathable when in a more upright riding position, and then closed to the wind when the rider’s head is down. It’s claimed to weigh 260g in a medium size. Photo: David Rome. 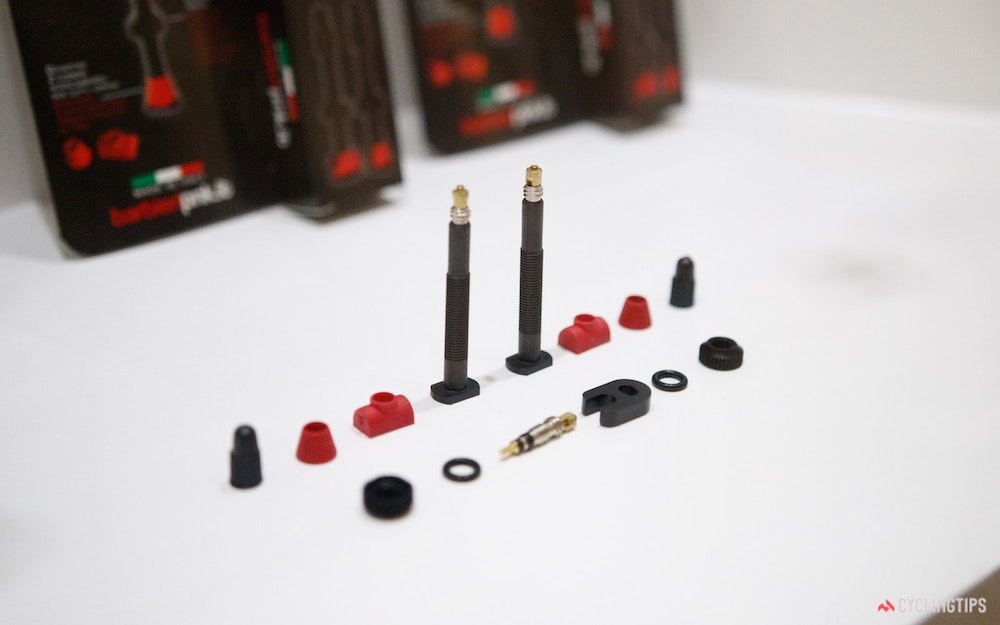 The company that claims to have produced the world’s first carbon mini pump, Barbieri, is back with another composite product: the CarbonAria carbon fibre tubeless valve stem. A pair is claimed to weigh just 8g, saving a further 2g over aluminium valve stems. The valves are sold as a pair and include both a square and round seal to fit a variety of rims. Currently the valves are available in 35 or 45mm lengths, with longer expected in future. The kit is quoted at €20. Photo: David Rome. 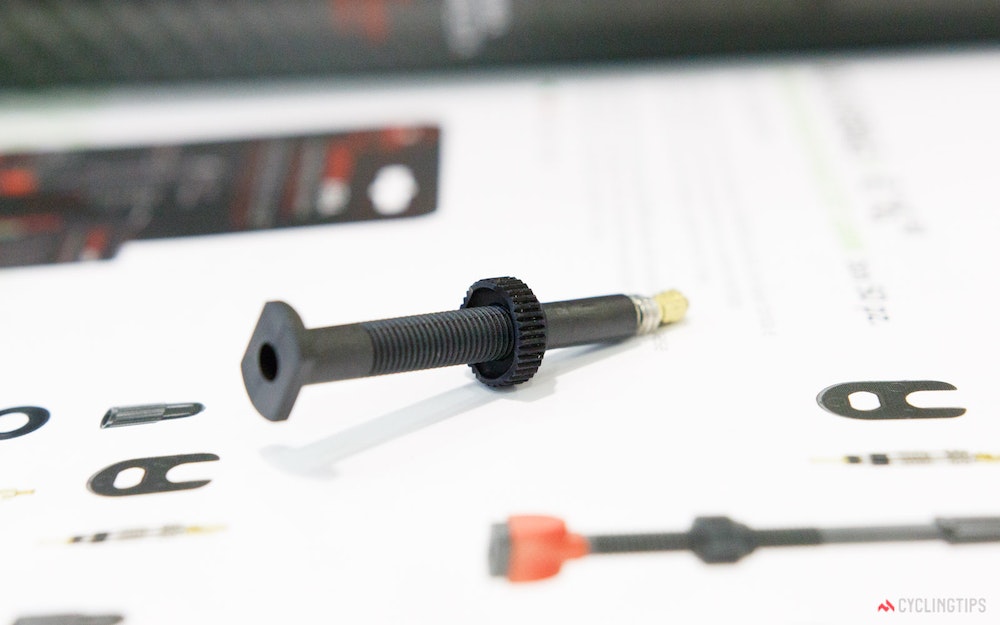 The Barbieri CarbonAria valve stem lockring features a concave shape that locks into the rounded profile of a rim. Photo: David Rome. 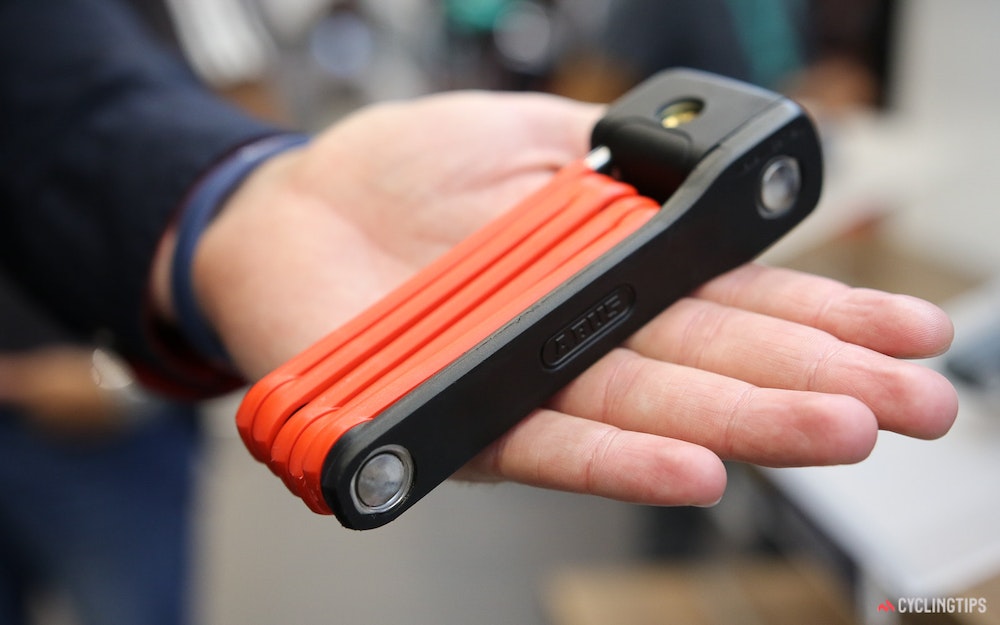 Abus is now offering a smaller version of its Bordo folding lock. The Bordo Lite Mini is a 60cm-long reinforced lock with a hardened core and a claimed weight of 500g. When folded, it’s the right size to fit into a jersey pocket. Mounting to the bike is possible, although the bracket to do so is sold separately. Photo: David Rome. 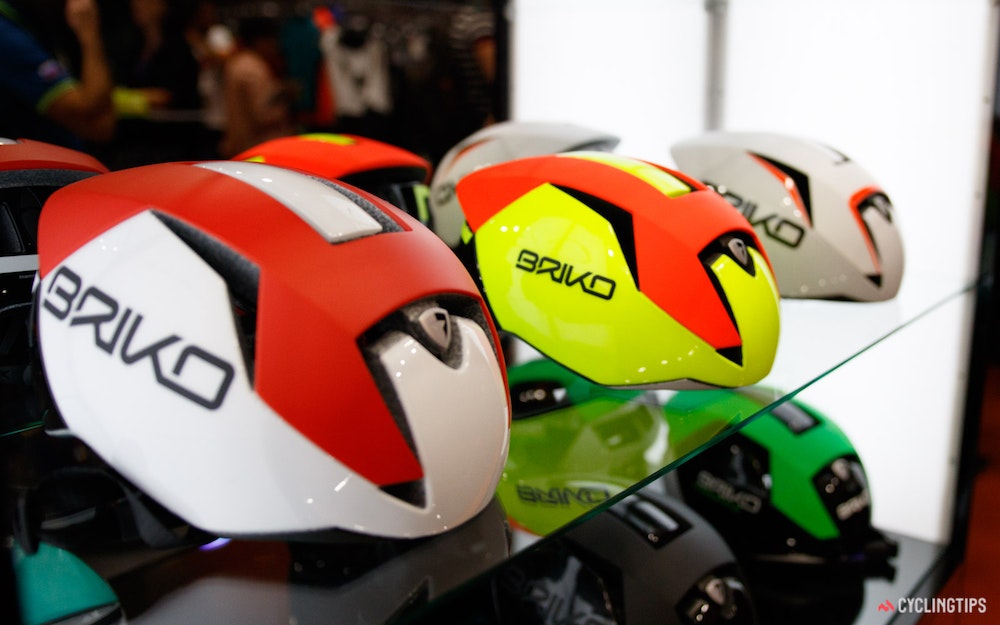 Briko is arguably best known in cycling for its eyewear, previously worn by famed sprinter Mario Cipollini. However, the Italian company has an even longer history (est. 1945) making safety helmets. Pictured is Briko’s latest aero helmet, the Gass. What caught our eye was the bright contrasting colours and unique profile. Photo: David Rome. 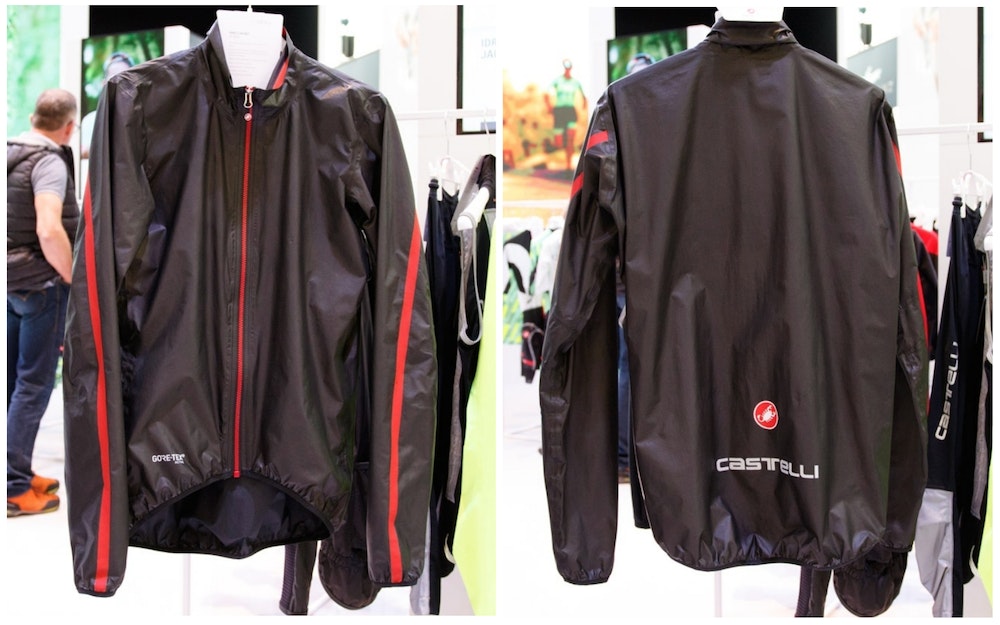 Keeping things a little simpler, Castelli has an even lighter version of the Idro, the Idro 2. It’s designed as an emergency wind and water jacket that can easily be carried in a jersey pocket if the weather is threatening. Expect this jacket to sell for €270. Photo: David Rome. 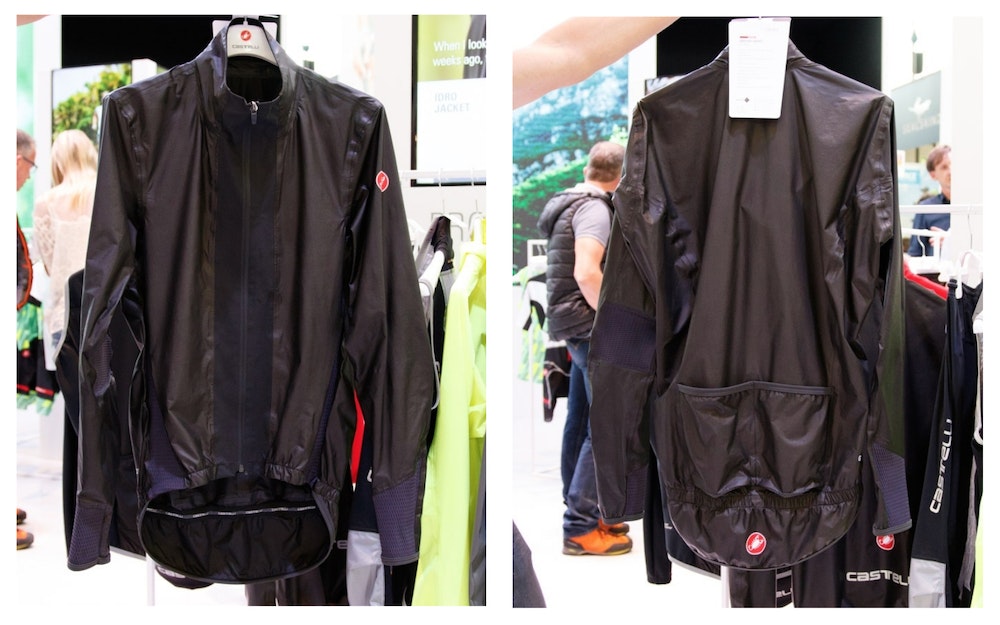 Castelli has improved on its lightweight Idro jacket for 2018. The IdroPro was developed with input from Team Sky and features a longer tail, two rear pockets and a closer fit. That closer fit is met with stretch panels to help keep the jacket aero and flap-fee in the wind. The jacket achieves breathability and waterproofing by using Gore-Tex’s ShakeDry two-way fabric. The jacket will be offered in men’s and women’s cuts, although it’s only expected to be available from February 2018 and is expected to sell for €350. Photo: David Rome. 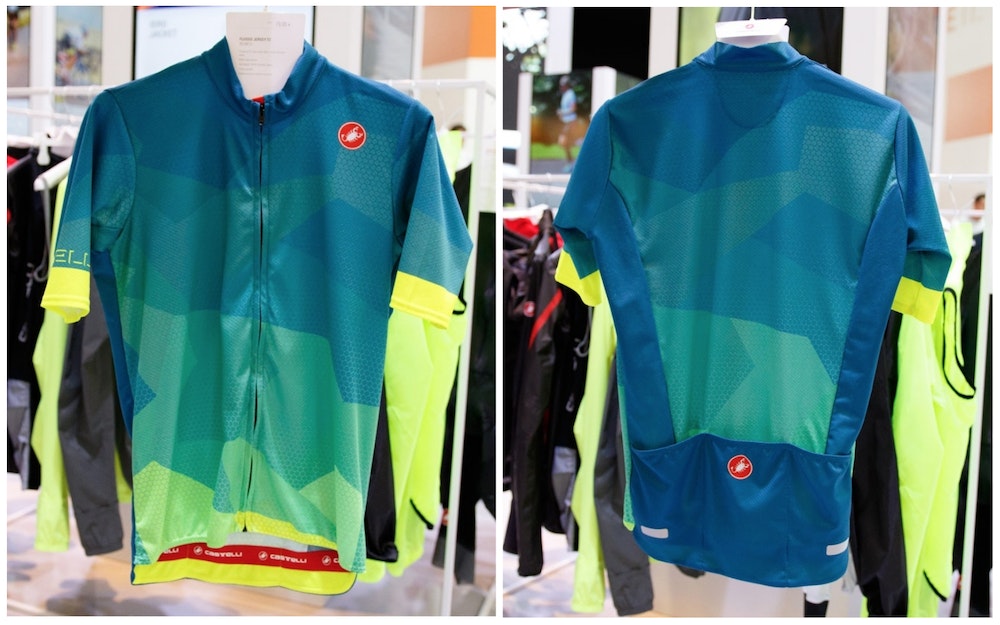 And for when the weather is actually nice, Castelli has the Podio Doppio Jersey FZ. It’s a lightweight jersey with a number of nice features to keep you cool. But more importantly, it looks good. Price is €75. Photo: David Rome. 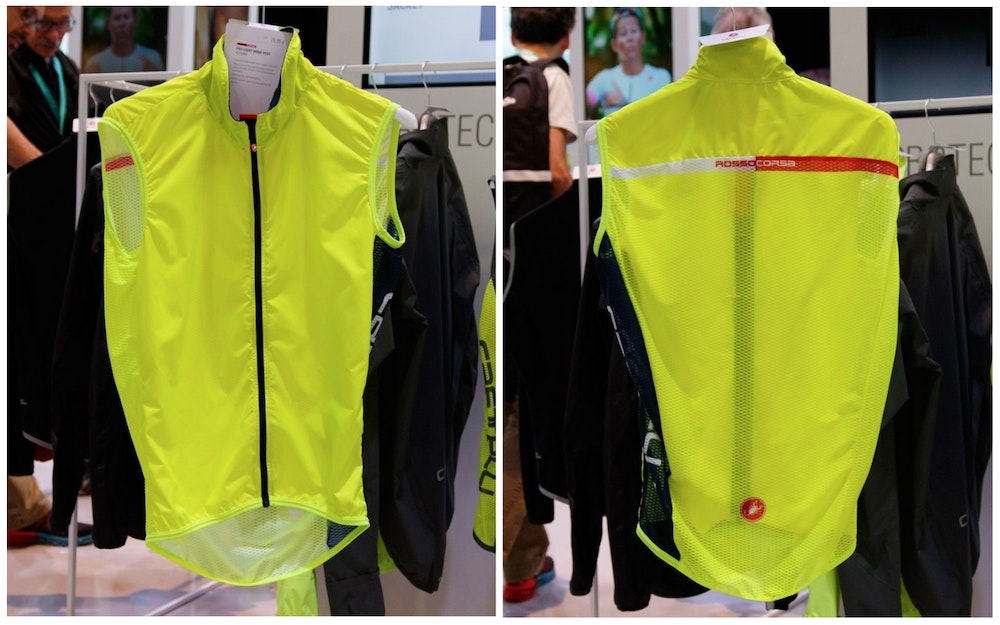 Even lighter than the Idro 2, Castelli has a new lightweight vest called the Pro Light Wind Vest. It features a fully open mesh back and a lightweight wind-blocking front. Expected price is €80. Photo: David Rome. 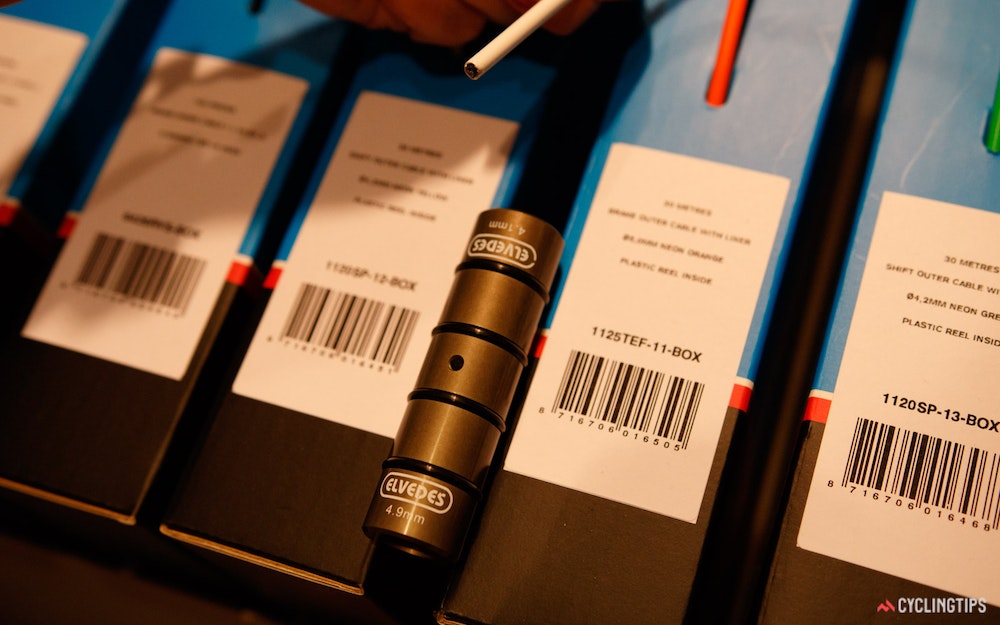 What do you use to open up cable housing ends once cut? A sharpened spoke? An awl? Nothing at all? Elvedes’ Cable Pricker is a tool specifically designed for the task. It features one end for brake housing, and another end for gear housing. It’s surprisingly quick and effective to use. Photo David Rome. 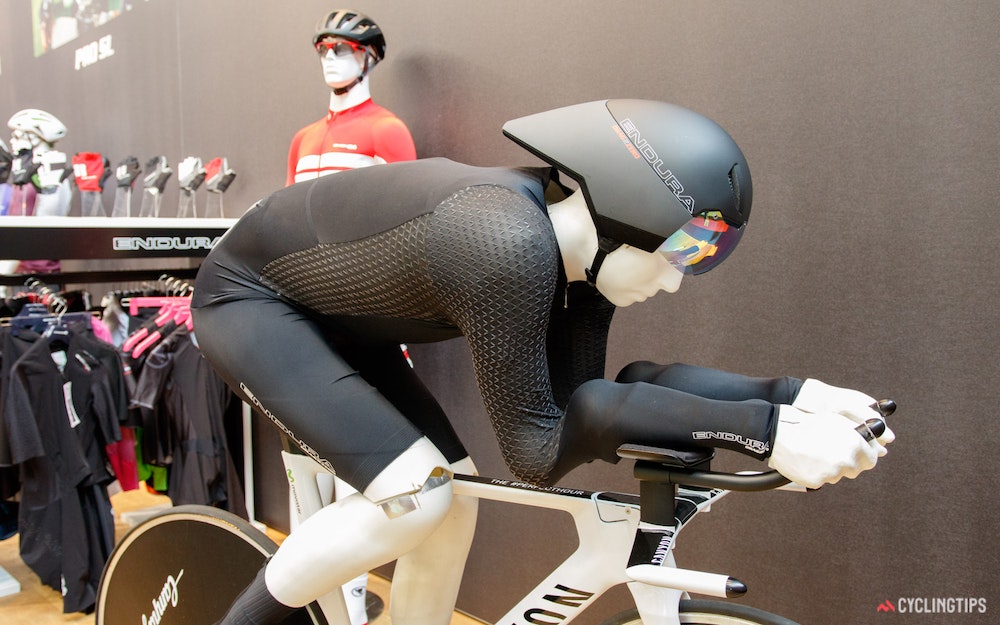 Equally suited for dress-up parties or time trials, Endura’s Drag2Zero Encapsulator suit is claimed to be crazy fast. The suit features a silicone print on the outside that’s designed to further trick the wind, while that race number is given a clear and breathable UCI-compliant slip pocket at the back. As for the dummy pictured, the poor guy went so fast he lost his elbows. Photo: David Rome. 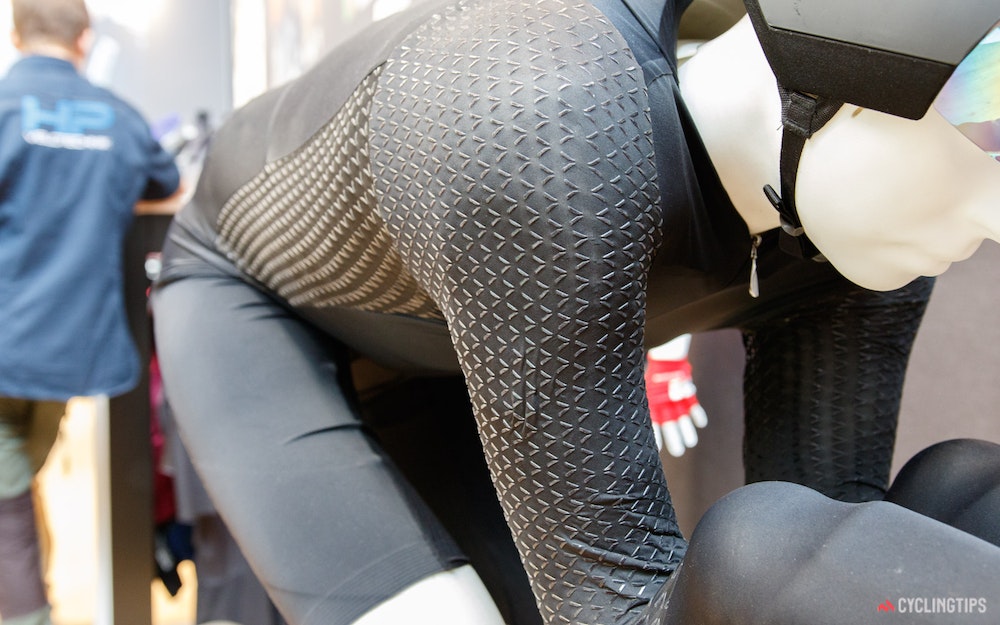 A closer look at that silicone print on the Endura Drag2Zero Encapsulator suit. Fast and stylish. Photo: David Rome. 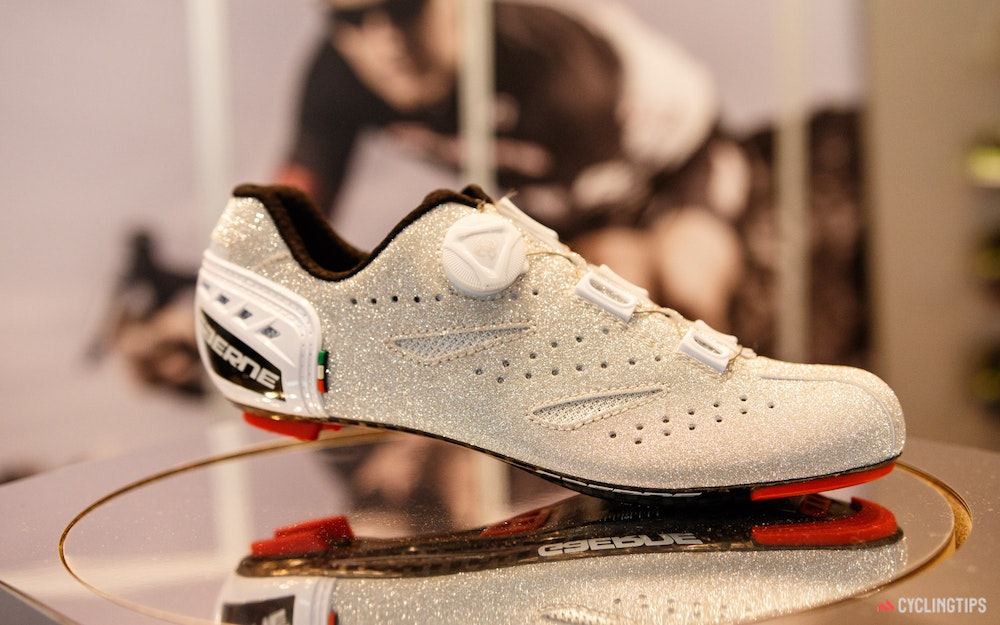 Sparkling brighter than Kylie Minogue’s silver shorts, the women’s-specific Gaerne G.Stardust shoes can’t be missed. These shoes feature a carbon sole, but Gaerne state these sit at about third-tier in the line-up. They’ll be offered in sizes from EU36 to EU41 sizes. The photo doesn’t do the sparkle justice. Photo: David Rome. 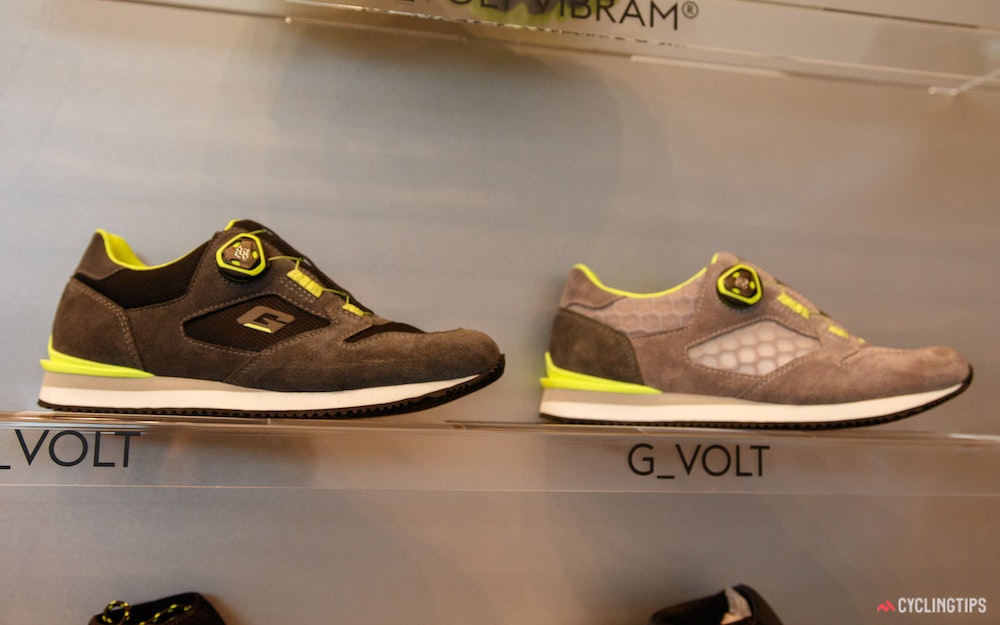 Want something to wear to the podium that’s less slippery than the kicks you won in? These shoes from Gaerne should do. Photo: David Rome. 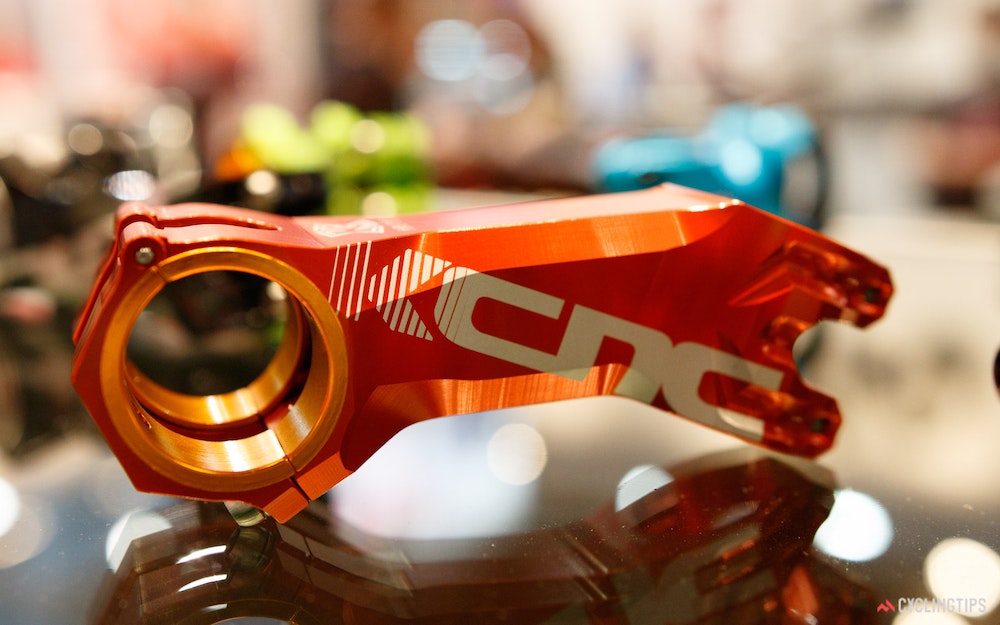 Looking for a CNC-machined stem that will get you low? KCNC’s drop stems are available with either -17° or -25° drops, in lengths ranging from 60mm to 120mm. The stems feature a 35mm handlebar clamp diameter with 31.8mm shims included. They’re available in a myriad of colours. Photo: David Rome. 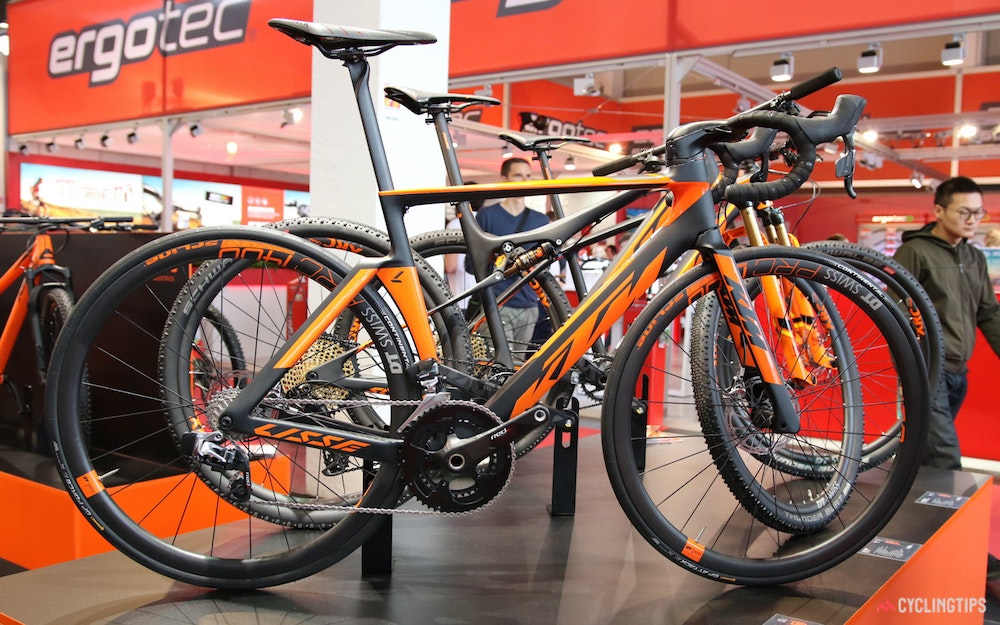 While its motorbikes are common worldwide, KTM’s bicycles are rarely seen outside of Europe. This Revelator Lisse Prestige aero disc road bike looked worthy of a snap. It certainly has some wild tube profiles in play. Photo: David Rome. 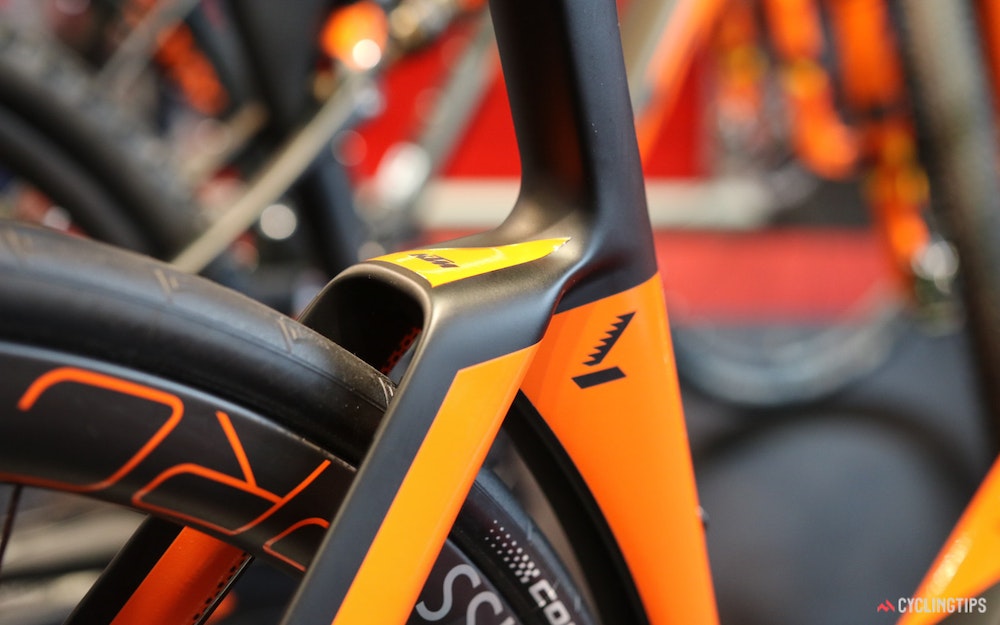 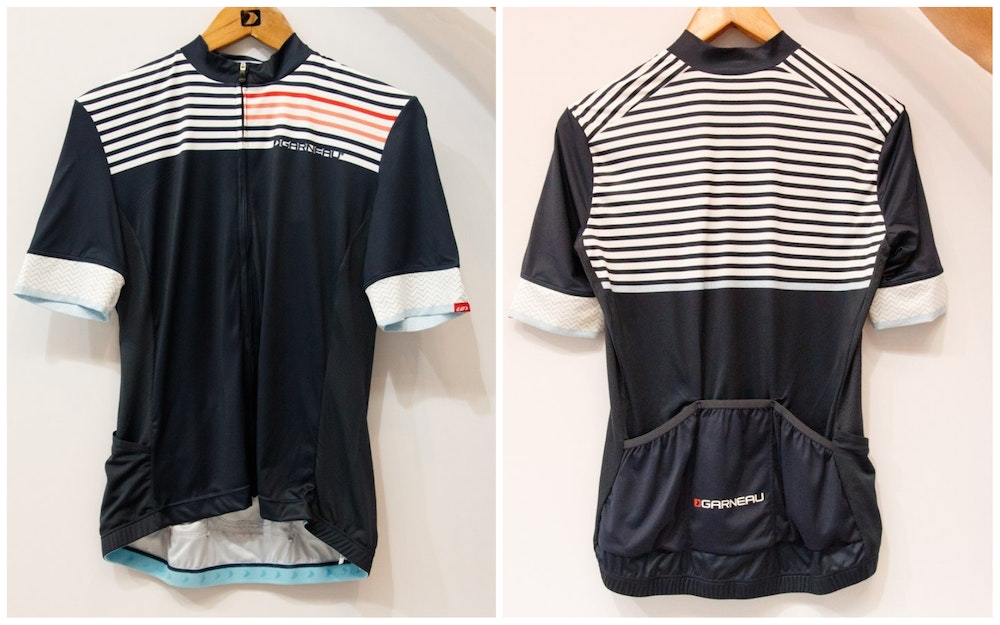 While Garneau offers a wide range of shoes and helmets, the brand is best known for its clothing. The Women’s Equipe jersey (men’s version available, too) is pitched as a high-end item at a mid-range price. The materials, fine details, and quality construction certainly make this feel more expensive than the US$95 tag. Photo: David Rome. 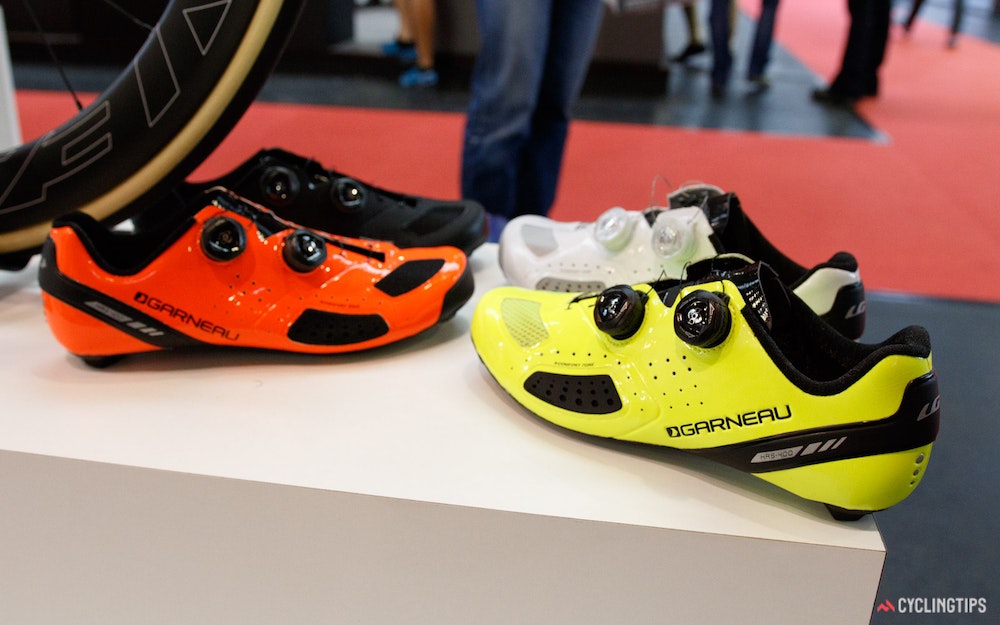 Louis Garneau won a Eurobike Gold award for its latest kicks. The Course Airlite 2 use the company’s latest channeled carbon sole for ventilation from toe to heel. The new shoe features an updated anti-slip heel cup and heel retention system, while the instep area is treated to a “Power Zone” laminate, designed to resist the foot from rolling inward under power. Retention is handled with the new TX Lace from Boa, which anchors beneath the upper for a cleaner look and tightens onto a low-friction panel on the shoe tongue. Photo: David Rome. 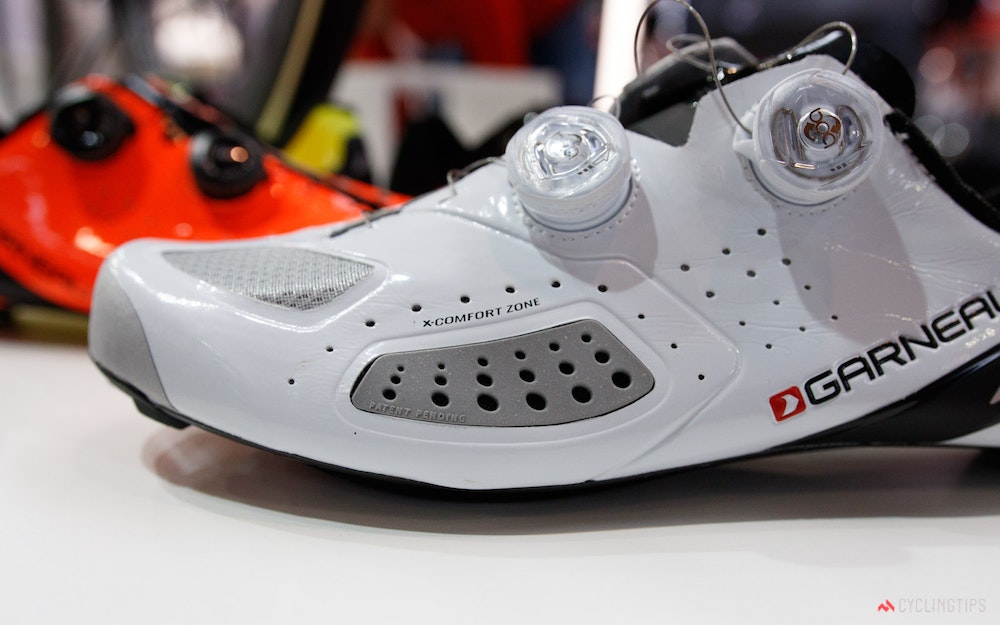 That’s not all for the Louis Garneau Course Airlite2: it also features the new “X-Comfort Zone” elastomer panel at the outside edge of the foot, providing up to 5mm of movement to overcome tightness or pinching issues often felt in the area. Garneau claim that this feature allows them the ability to offer a single width and saves people from having to run a wider shoe than ideal. Photo: David Rome. 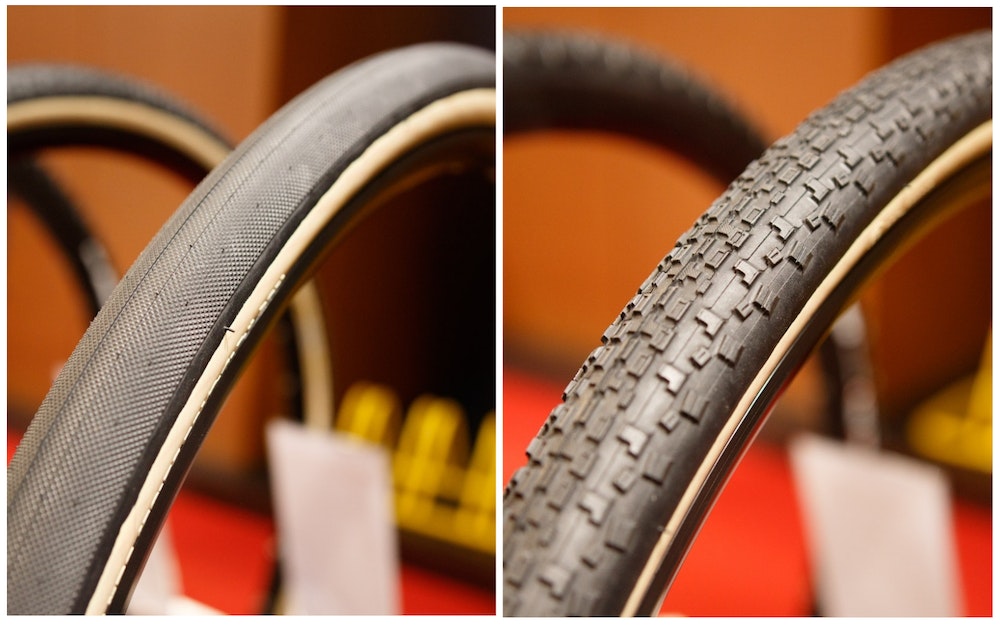 Maxxis is now offering its Rambler and Re-Fuse tubeless-ready tyres in a tan-wall option. With 40c versions of each available, we suspect the gravel crowd will find joy in these. Photo: David Rome. 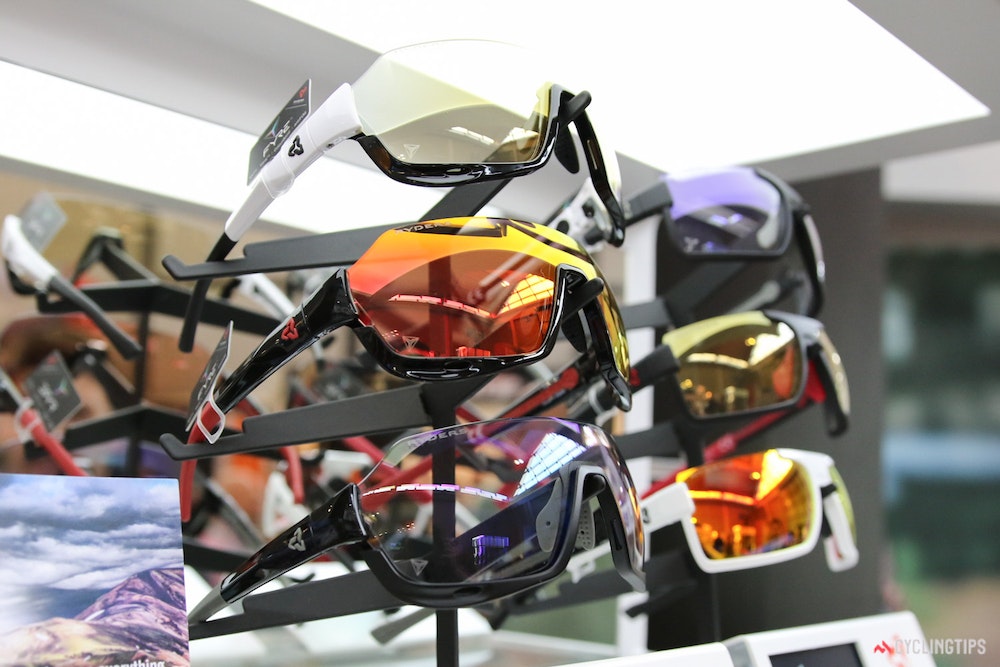 For the past few years, Canadian company Ryders has been part of the Essilor global eyewear group. Since then, the once budget-focused brand has been trying to reposition itself as an upmarket offering. Sitting at the top, the Roam Fyre has everything and more that a top-end product should. The lens claims to offer high impact protection; be nearly impossible to fog; and with photochromic transitioning, a mirror finish, a high-contrast tint, and an extremely clear optic quality, the company is going straight after Oakley’s Prizm range. As you can see, the frame itself is the reverse of most eyewear, leaving vision at the brow completely open. The claims were bold enough that we’re getting a pair to test, so stay tuned on this one. Photo: David Rome.

Now we are off to Interbike in Las Vegas!