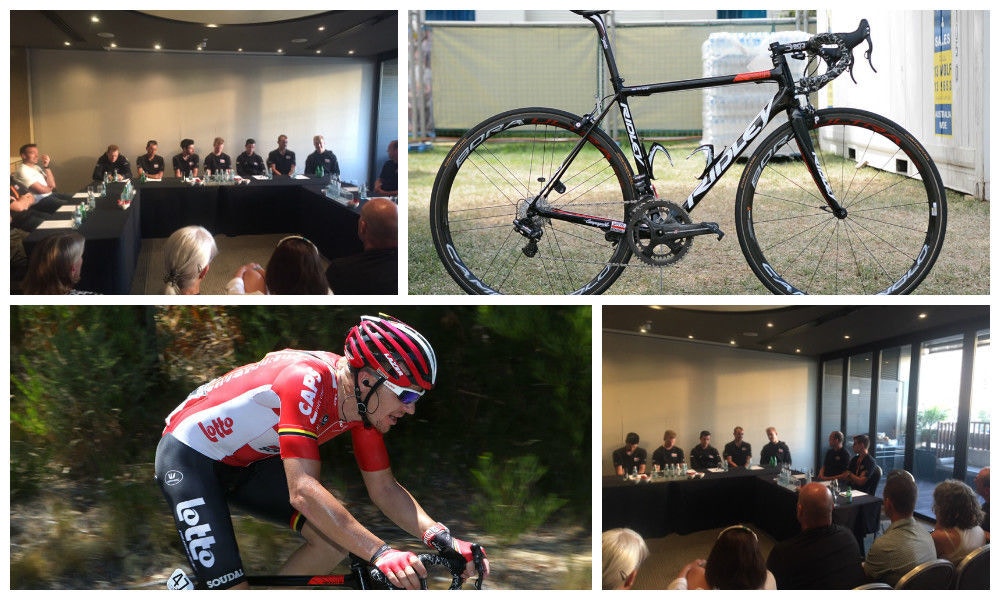 Have you ever wondered how many staff make up a WorldTour team? Or how many miles pro riders cover in a year? Or perhaps what drives the 'Ironman' of the WorldTour, Adam Hansen, who this year hopes to add successive Grand Tour numbers 14, 15 and 16 to his current tally? We were fortunate enough to be invited to a meet-and-greet with the Lotto Soudal team at the Tour Down Under to hear from the riders and get to know the team in a more intimate setting.

The riders had just completed the BikeExchange Stage 5 of the Tour Down Under, with the hard Willunga hill finish that saw Rafael Vallis move to 8th overall on GC. The team were tired from a hard week of racing, but were in good spirits - laughing, joking and sharing banter that we rarely see.

We quickly discovered the team is so much more than the seven riders we see on the road. Lotto Soudal is made up of approximately 60 staff, 27 riders, 9 soigneurs, 8 mechanics, 7 medical practitioners, and has an extraordinary budget of around 12 million Euros (or roughly $11M USD) a year to keep the team on the road. Hometown favorite and arguably the most well-loved man in the pro peloton, Adam Hansen, was unsurprisingly asked the majority of the questions. He revealed a little-known fact that gives the rest of us hope: he was terrible at cycling at the start! Adam began his cycling journey in triathlon. He would regularly crack into the top 10 of National races, but his weakest leg was cycling, so he set about to improve it. The time was obviously well spent!

Adam takes a very unique approach to cycling, suggesting that most riders - both pro and amateur - train too much. After every Grand Tour, Adam takes a full week off the bike until he feels mentally and physically refreshed to begin his next campaign. As Adam describes this routine, Kiwi Greg Henderson chimes in, "He's special!" Through racing alone, Adam will cover approximately 10,250 mile per year. Add training on top of that, and the 18,600 mile mark is blown out of the water. We got a view into the less-than-glamorous life of the team soigneurs. The lifeblood of the team are awake hours before the riders, preparing food, vehicles, and bikes for racing. They follow the riders during the stage in the team cars, deliver food at the food stops, and are back at the hotel after the stage, giving massages and preparing dinner. Once the riders are fed, had treatment delivered, and their kit is washed and clean, the soigneurs can get some shut-eye before repeating the whole thing again the next day.

Veteran of five Olympic and five Commonwealth Games, Greg Henderson spoke about some scary moments down the Gorge Rd descent approach the Corkscrew, "You can't think of the fear or what might happen in the moment". One touch of the brakes and you'll be at the back of the peloton, or a moment's hesitation and you could end up on the road. The Kiwi rider, who is in the twilight of his career, is already coaching ten athletes and hopes to move into a development role once he retires to 'give back to the sport' that has given him so much.

If you ever get the opportunity to chat to Lars Bak, lock it in. We didn't hear much from the Dane, but what we did was gold! Lars is another veteran on the Lotto Soudal team and had this to say when asked what type of rider he was - "Well... I'm not super good at anything actually." After we had finished having a chuckle at that response, Lars clarified, "but I'm not super bad at anything either". Lars has finished fifth at the Paris - Roubaix and won a stage at the Giro d'Italia - not super bad indeed.

Thanks to the Lotto Soudal team for the opportunity to get up close and personal with the riders and staff. Best of luck in 2016!