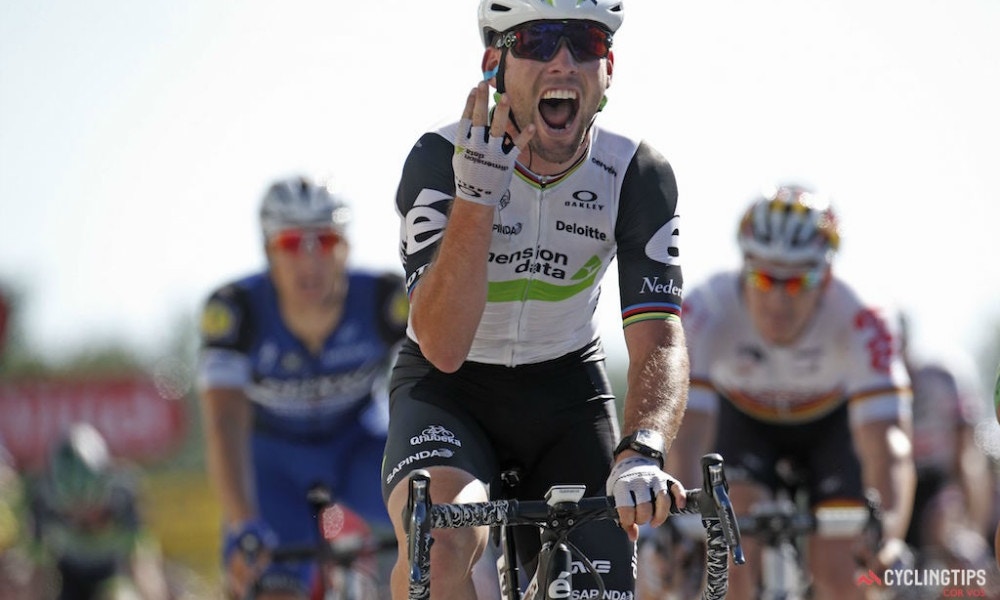 The win marks the 30th stage win at the Tour for “The Manx Missile,” moving him within five victories of surpassing Eddy Merckx for the most Tour stage wins all-time. The victory is also the fifth stage victory for Team Dimension Data at this year’s Tour, after Steve Cummings also captured Stage 7.

Cavendish’s win was marked by a touch of controversy, as Marcel Kittel (Ettix-QuickStep) asserted that Cavendish had deviated from his line and impeded Kittel. And while there was truth to that, Kittel, who had been passed at that point, had also deviated in the direction of Cavendish. The race jury reviewed the footage, and the result stood.

“I knew Marcel would be on the front early. I assessed with two kilometres to go, that we only had four guys, and that’s not enough into a headwind,” Cavendish said. “In fact, the guys on his team did a brilliant job. [Fabio] Sabatini [Ettix-QuickStep] did more than I thought he would be able to do in a headwind there at the finish. He was really good, but Kittel was ultimately left too long on the front. It was a case of just waiting until he lost his peak speed, and then jumping around him in the final.”

Kittel said little about the sprint, other than that he had needed to brake to avoid colliding with Cavendish.

“I started my sprint super fast with 220 metres to go,” Kittel said. “The train worked well. I was in the inside, I was well positioned. I saw Cavendish passing me and he swerved to the right and I needed to brake to avoid collision. It’s not up to me to decide [if Cavendish had an irregular sprint.]”

Sagan said he felt the best man on the day had won.

“I don’t know what made Marcel Kittel complain about Cavendish in the sprint,” Sagan said. “I was far back and I was coming to the front. I’m happy with my third place. Cavendish is good! What’s his record of stage wins at the Tour de France? Six? He’s still three to go to beat his record then. He has done a strong sprint again today. He’s ready for the Olympics. There’s no hierarchy among the sprinters. One year it’s Kittel winning most of them, the year after it’s Greipel, now Cavendish is back. Good on him!”

The wind did not blow in the peloton’s favour, and made for a slow stage. The GC did not change and Chris Froome (Team Sky) pulled on another maillot jaune after the stage. He leads Bauke Mollema (Trek-Segafred) by 1:47, with the white jersey of leader of the Best Young Rider classification, Adam Yates (Orica-BikeExchange), in third.

“Today was a blessing for the GC riders, riding into a block headwind all day,” Froome said. “You could just sit on wheels and recover after a couple of hard days.”

Saturday marked the fourteenth stage of the 2016 Tour de France and the riders traveled 208.5km (129.5mi) from Montélimar to Villars-les-Dombes Parc des Oiseaux. With no difficult climbs on the route and a flat run-in to the finish, the sprinters of the peloton were keen to have another shot at victory.

The wind was blowing strongly at the beginning of the stage, which may have deterred many attacks, as a breakaway was not established until almost an hour of racing had been completed. It was a slow hour, however, with the peloton averaging a pedestrian 30.4kph (18.8mph).

Jérémy Roy (FDJ) was the first attacker of the day and he was soon joined by Alex Howes (Cannondale-Drapac), Martin Elmiger (IAM), and Cesare Benedetti (Bora-Argon 19). Entering the stage Cannondale-Drapac was the only team to have not placed a rider in the top-10 on a stage in this year’s Tour.

“At the beginning of the stage we paid attention to monitor if a big group wasn’t going away but it became very quiet,” Roy said. “I didn’t want to get bored all day. It would be nicer to be at the front. I’ve been happy with three riders coming across. We swapped turns very well. I’ve never believed we would make it but at the end Martin Elmiger had some strength left. We maintained ad advantage of 40 seconds but with the block head wind, there was nothing more we could do.”

The quartet quickly built an advantage of over four minutes, before Etixx-QuickStep, Lotto-Soudal, and Dimension Data sent riders to the front of the peloton to keep the gap close. Lotto-Soudal was motivated to ensure a bunch sprint at the end of the stage, as Greipel, who was celebrating his 34th birthday, has not yet won a sprint at this Tour. While the German has 10 stage wins at the Tour, he has never won on his birthday.

Mathias Frank (IAM) abandoned the race at the feed zone due to gastroenteritis, and with less than 60km to go a crash at the back of the peloton brought down Daniel Navarro (Cofidis), Jens Debusschere (Lotto-Soudal), Matti Breschel (Cannondale-Drapac) and a few others. The latter abandoned the race and was loaded into an ambulance with a deep laceration to his right leg.

Howes was dropped from the breakaway with less than 15km to the finish and soon after there were only two riders in the lead. Elmiger attacked on a slight rise with 9km to go and only Roy was able to follow. The duo held a mere 30 seconds over the peloton, which was charging for a field sprint.

The high speed in the peloton caused splits, but none of the GC contenders were caught out. Katusha reeled in Elmiger and Roy just before the bunch rode under the 3km to go banner.

Etixx-QuickStep took the race by the horns, but the blue train was swarmed inside the final kilometre by Lotto-Soudal, trying to guide Greipel to victory.

Fabio Sabatini (Etixx-QuickStep) made a late surge and brought Kittel to the front of the peloton. Kittel opened the sprint with Cavendish locked onto his wheel. The rider from the Isle of Man proved to be the strongest and quickly moved past Kittel on his left-hand side. Cavendish moved slightly to his right after he passed Kittel, causing the German to let off the gas to avoid clipping Cav’s rear wheel.

Kittel put a hand up in protest, but the commissaires did not adjust the result. The Etixx-QuickStep rider finished fifth on the stage. Greipel could only manage sixth.

John Degenkolb (Giant-Alpecin), who has been struggling to return from his early season accident, finished a solid fourth.

“It was super important for me to keep the trust of my team,” he said. “It means a lot to me and they did a great job to lead me there. In the finale, I took the right wheels, I had the punch, I was part of the top flight. It really boosts my morale. It’s very positive for the last week of the Tour. There were doubts but we knew it was a matter of time. You have to wait and the more pressure you put on yourself the more things fail you. I hope I’ll be at my best on the Champs-Elysées.”

The general classification remained unchanged and Froome leads Nairo Quintana (Movistar), who sits fourth overall and finished second to Froome when the Briton won the Tour in 2013 and 2015, by 2:59.

Sagan remains in the green jersey as leader of the points classification and Thomas De Gendt (Lotto-Soudal) leads the King of the Mountains classification.

The Tour enters the Alps tomorrow, with a demanding 160km (100mi) stage from Bourg-en-Bresse to Culoz. The stage 15 parcours includes 4,080m (13,385ft) of climbing with the hors categorie Grand Colombier (12.8km at 6.8%). After Froome put considerable time into the other GC contenders in Friday’s individual time trial, attacks can be expected.

• For the first time in the history of the Tour de France, no rider from France, Italy, Spain or Portugal has won any of the first 14 stages.

Michael Matthews finished just outside the top 10 on stage 14, while Adam Yates finished safely in the peloton to retain the white jersey and third on the general classification. It was a good day for Yates who was able to sit on the wheels and recover as the peloton rode into a solid headwind for most of the stage.

Sport director Matt White was pleased that Yates and ORICA-BikeExchange made it through the long stage without incident.

“It was a pretty uneventful stage today, long and into a headwind for most of the day,” said White. “We saw some negative racing from the bunch. It’s a long Tour de France this year, maybe two or three hundred kilometres longer than usual, and you saw a lot of teams taking the opportunity to recover a little today.”

“We protected Adam (Yates) very well and came through the stage without any problems. Tomorrow is going to be relentless all day long and it was important to try and conserve as much energy as possible today.

“There are four big tests coming up in the mountains and tomorrow is the first, this is as tough as it gets. The first climb comes straight out of the neutral zone and the racing will start immediately.”