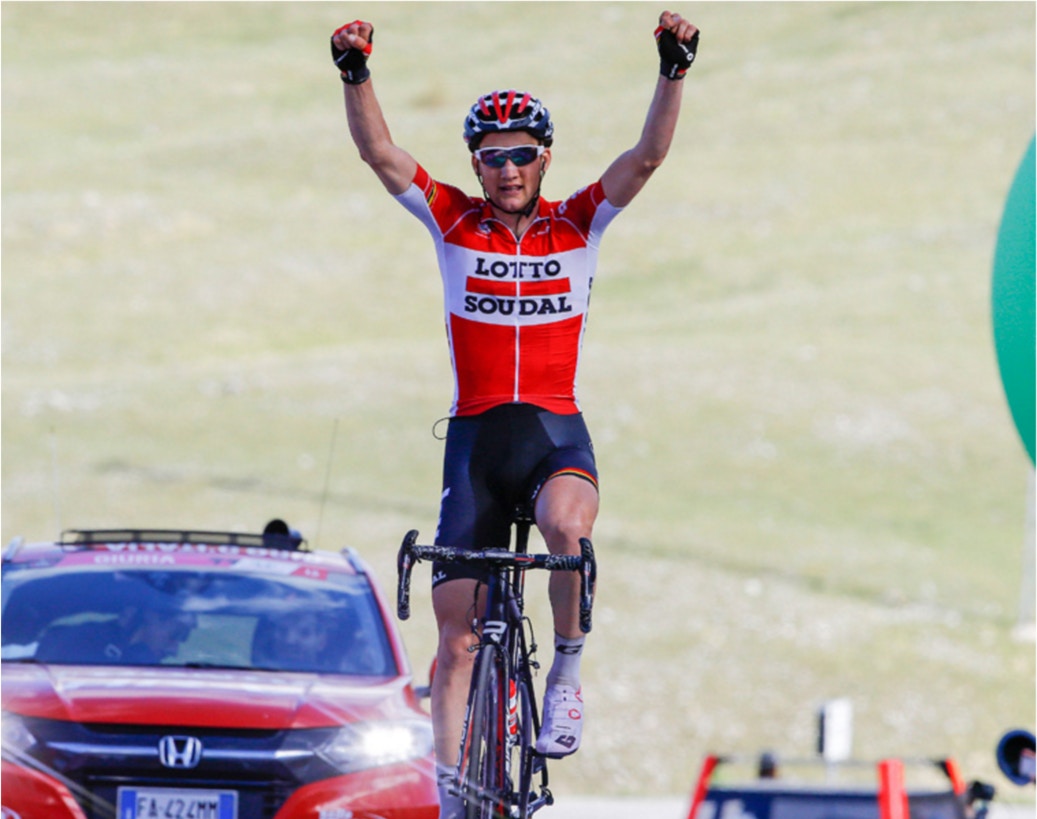 Having ridden strongly in the Ardennes Classics, Tim Wellens picked up the first Grand Tour stage win of his career when he took stage six of the Giro d’Italia.

The 25 year old Belgian was best on the first summit finish of the race, hitting the line at Roccaraso one minute 19 ahead of Jakob Fuglsang (Astana) and Ilnur Zakarin (Katusha). Race leader Tom Dumoulin rode well and took fourth, one minute 22 back, with Kanstantsin Siutsou (Dimension Data) and Domenico Pozzovivo (Ag2r La Mondiale) a further two seconds back.

Wellens’ success was based on early aggression and good legs. The Lotto Soudal rider was one of three who bridged up to early leaders Alessandro Bisolti (Nippo-Vini Fantini) and Eugert Zhupa (Wilier Trestina-Southeast) with 62 kilometers to go, and then attacked alone on the day’s final climb.

He time trialed from there until the finish, lying low over his bike on the flatter sections of the climb in order to maximize his aerodynamics and then pushing hard on the steeper slopes.

“I wanted to go from the beginning but I didn’t succeed, there we three in front,” he said after the podium presentation. “They didn’t go very fast, so I was able to come back with [teammate] Pim Ligthart. We bridged to the leaders and my legs were good. Then I went on the final climb. I am very, very happy.”

Wellens has taken some solid results in the past, including a the final stage of this year’s Paris-Nice. He considers what he did today as ranking above that.

“My other victories were also very, very nice. But I had a lot of pressure because I said before the Giro that my objective was to win a stage. I am very happy that I did it,” he said.

The success is the second in a row for Lotto Soudal, following on from Wednesday’s win by Andre Greipel. Netting three in succession is now the new target, according to Wellens.

After an undulating couple of stages, the Giro had its first real taste of the mountains on stage six, with the 157 kilometer race from Ponte to Roccaraso ending with an uphill climb to the line.

The climbing theme began very early on, with the uphill roads starting approximately 15 kilometers from the start and winding upwards to the second category summit of the Bocca d. Selva (km 54.1). After a 20 kilometer descent the roads followed a rolling pattern towards the start of the final climb, another second category ascent.

After 34 kilometers of racing the break’s lead was over six minutes, with the Giant-Alpecin squad of race leader Tom Dumoulin content to let them gain ground. Kolobnev, the best placed of the three, had started the day seven minutes 42 seconds back and he was not considered a major threat to the Maglia Rosa.

Bisolti led over the first climb, while behind his team-mate Damiano Cunego grabbed the points for fourth and bolstered his advantage in the mountains competition. After the climb, and inside the final 90 kilometers, the gap was down to four minutes and this continued to drop.

Once it fell to under a minute Zhuba decided to push on alone, with Kolobnev drifting back in the bunch and Bisolti stuck in no man’s land.

However the peloton then eased back and with 75 kilometers remaining, the gap was back up to over one and a half minutes. This increased again to four minutes, while behind Tim Wellens (Lotto Soudal), his teammate Pim Ligthart and Trek-Segafredo’s Laurent Didier set off in pursuit and quickly made inroads into that lead.

The junction was made with 62 kilometers left, leading to a five man lead group. That sparked off concern behind and Diego Ulissi’s Lampre-Merida team began to chase.

However the Italian pursuit didn’t last too long, with Giant-Alpecin moving to the front again and taking over with 50 kilometers remaining. The gap at that point was almost six minutes, but the German team allowed it to increase even more.

With 30 kilometers to go, the quintet was eight minutes and 26 seconds ahead and it was looking increasingly possible that one of them could take the stage win. The next ten kilometers saw that gap drop by a minute and a half, but the break still started the final climb with a solid – and encouraging – lead.

“Tomorrow we will try to help André for a second victory for him. Then for the rest of the Giro I will try to go for another stage.”

Dumoulin rode well, surging after a move by Vincenzo Nibali (Astana) was hauled back. He initially did much of the driving to bridge to Fuglsang and Siutsou and, because of that effort, was gapped slightly inside the final 500 meters by Fuglsang and Zakarin.

Still, he expanded his gap over the other GC contenders and will see the stage as a success.

He ends the day 26 seconds ahead of Fuglsang and 28 up on Zakarin, who move to second and third overall. Bob Jungels (Etixx-QuickStep) is fourth with Steven Kruijswijk (LottoNL-Jumbo) fifth and Alejandro Valverde (Movistar) sixth.

“I felt much better than I expected today,” he told Eurosport at the finish. “Especially in the final I had good legs. I told [teammates] Tobias Ludvigsson and Georg Preidler to ride, then the other teams took over. Nibali attacked on a bad moment and Sky brought him back on a downhill part. Then I saw the moment to attack.

“When I felt that moment, you just have to go and not think about it.”

Asked if he was frustrated that the riders he was with in the finale didn’t ride more with him, he said that it was logical.

“I could understand it. Zakarin was later on cooperating quite much. In the beginning they waited a bit, but I would have done the same. I was not really frustrated, but in the end it cost me a bit on the finish line. Overall it was a good day.”

Ulissi’s Lampre-Merida team was chasing hard, still believing it was possible to drag the break back. Ligthart slipped backwards, thus reducing the lead group to four. With 15.6 kilometers to go Didier tried to reduce this selection further, leaping clear, but Wellens surged behind, catching and passing him.

Back in the peloton, the Astana team hit the front in a bid to set things up for team leader Vincenzo Nibali. This saw Wellens’ advantage drop to four minutes 45 with 13 kilometers to go.

At that point Astana’s Jakob Fuglsang attacked, making the move he predicted he would. He had said before the stage that the team tactics were for him to go first and then Nibali to surge later, and the first part of that plan was now in motion.

Fuglsang quickly ate up the ground between him and Ligthart and kept going. However Wellens was resisting well: with 11 kilometers left, he was still four minutes 25 seconds ahead of the Dane, who was about to be joined by Dimension Data’s Kanstantsin Siutsou.

With Fuglsang clear, there was no reason for Astana to keep leading the peloton and Giant-Alpecin once again moved to the front. As Wellens reached the ten kilometer to go point, the German train was four minutes 53 seconds back, and 35 seconds behind Fuglsang and Siutsou.

Five kilometers later the leader’s advantage was dropping: Wellens was three minutes 32 up on the two chasers, and four minutes 12 ahead of the bunch. The 40 second gap between Fuglsang and the peloton put him into the provisional race lead, having started the day 35 seconds off pink in ninth overall.

Wellens kept fighting and settled into an aero tuck on the flatter sections, carving through the headwind. Fuglsang and Siutsou were less aerodynamic in their position but were still moving briskly, catching the other riders who had been in the break. However the peloton was inching closer to them, narrowing the gap to 20 seconds.

Realizing that Fuglsang’s chances were doomed, Nibali surged and quickly got a gap. However the Sky team hauled him back, prompting race leader Dumoulin to play his own card. He was joined by Ilnur Zakarin (Katusha) and Domenico Pozzovivo (Ag2r La Mondiale) and together these reeled in Fuglsang and Siutsou.

Out front, Wellens raced in to take his first Grand Tour stage win. Behind, Dumoulin led the chase inside the final kilometers, knowing that he had a chance to pad his lead over some of his other rivals. Fuglsang then accelerated to the front, pushing the pace once more, and nabbed second behind Wellens.

Dumoulin was close by, however, with his strong performance both ensuring another day in pink and also acting as a reminder to his strong ride in last year’s Vuelta a España.

Friday’s stage covers 211 kilometers between Sulmona and Foligno. Although it is undulating, a bunch sprint is regarded by many as the most likely outcome. Dumoulin will aim to safeguard his overall lead while sprinters such as Marcel Kittel (Etixx-QuickStep) and André Greipel (Lotto Soudal) will seek to add to their tally.