Kittel Blasts to Victory on Stage 2 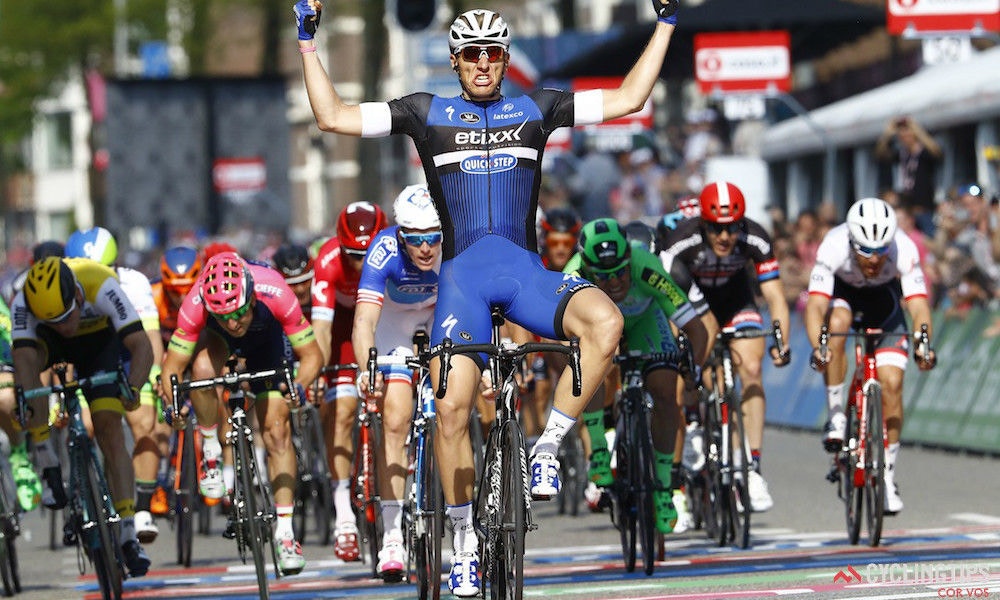 Marcel Kittel (Etixx-QuickStep) has won the opening road stage of the 2016 Giro d’Italia, blasting to victory in the Dutch city of Nijmegen on Saturday.

Kittel was the first to launch his sprint at the end of the 118 mile stage, hitting the wind with roughly 600ft to go. He quickly opened up a sizable gap which no one was able to close. Arnaud Demare (FDJ) took a distant second while Sacha Modolo (Lampre-Merida) was third.

Earlier in the stage a breakaway group of three riders got clear as soon as the flag dropped. Omar Fraile (Dimension Data), Giacomo Berlato (Nippo Vini Fantini), Maarten Tjallingii (LottoNL-Jumbo) built a lead that touched 10 minutes at one point, but the race was always going to come back together for a bunch sprint.

Tjallingii and Fraile were caught with just under 12.4 miles to go, while Berlato survived another 6.2 miles out front before he too was caught.

In the frantic final miles Etixx-QuickStep bided their time, only hitting the front with 1 mile to go. Kittel did the rest, timing his sprint to perfection and showing why he was the pre-stage favorite.

“I’m super happy to win the first bunch sprint of the Giro,” Kittel said after the stage. “Today my team did a very good job to bring me to the front. I had to get through a few gaps to reach the front of the group. It was a tricky finale and I’m very happy with how it went.

“Now I’m one second away from the pink jersey. Step by step, I’m getting there”.

“The whole race was a party! There were crowds everywhere,” said the Dutchman. “I enjoyed the moment because my team helped me keep the pink jersey in a really good way. Now Marcel Kittel is close in GC but the party continues”.

As the flag dropped to signal the start of the 2016 Giro’s first road stage, Omar Fraile, Giacomo Berlato and Maarten Tjallingii attacked from the peloton. And with that very first attack, the day’s breakaway was established.

The peloton sat up, allowing the three leaders to build an advantage that peaked at roughly 10 minutes with 53 miles completed and 65 miles to go.

Giant-Alpecin took responsibility for the bulk of the early pacemaking, keeping overall leader Tom Dumoulin safely ensconced in the bunch as the race made its way through his homeland.

With 56 miles to go the breakaway trio had seven minutes over the peloton as Etixx-QuickStep and Astana started contributing to the chase, the gap coming steadily down.

The trio’s lead was inside five minutes with a little less than 43.5 miles to go with Movistar also helping the chase. Sky and Cannondale also made brief appearances at the front.

At the first intermediate sprint, with 34 miles to go, Tjallingii rolled over the line uncontested, followed by break-mates Fraille and Berlato. With 31 miles to go, the gap was down inside four minutes and Giant-Alpecin was back on the front of the bunch.

Tjallingii took maximum points at the second intermediate sprint as well, with 28 miles to go, as the leading trio prepared for the first climb of the 2016 Giro.

The fourth category ascent to Berg en Dal was only 6.8 miles long but the leaders battled hard towards the top, all three keen to be the first leader of the KOM classification.

A late dash from Omar Fraille saw the Spaniard open up a gap and take the maximum points (and the jersey) ahead of Tjallingii and Berlato. When the peloton rolled across the top of the climb, the gap was down to 2:35.

The leaders lost momentum after the KOM and their lead started to disappear rapidly. With 13 miles to go, and the catch imminent, Berlato took off solo, leaving Tjallingii and Fraile to be caught with just inside 12.4 miles to go.

When Berlato crossed the finish line in Nijmegen to begin two laps of a 5.5 mile finishing circuit, he had just under a minute over the bunch. The pace would soon increase in the peloton, however, and Berlato was swept up just inside 6.2 miles to go.

After a reasonably sedate day’s racing in the peloton, the pace was well and truly on in the final 6.2 miles. LottoNL-Jumbo, Sky, Tinkoff, FDJ and Cannondale were among the many teams jostling for position in the run back into Nijmegen. Etixx-QuickStep waited until the last minute, hitting the front with just 0.9 mile to go and getting Marcel Kittel into position ahead of the final sprint.

With everyone else marking Kittel, it was up to the German to launch his sprint first. He hit the front with 600ft to go, and from that point on, nobody was able to get past him.

He hit the line with a gap of several meters and enough time for a full celebration. After a very frustrating 2015 season, the 27-year-old already has nine victories this year.

Kittel’s former teammate Tom Dumoulin finished the stage in the peloton and retains his overall lead as a result. He is trailed by Primoz Roglic (LottoNL-Jumbo) on the same time, while Kittel has moved from fifth overall to third as a result of a 10-second time bonus for winning the stage. He is just one second behind the overall lead.

The 2016 Giro d’Italia continues tomorrow with the final of three stages in the Netherlands: a 118 mile effort from Nijmegen to Arnhem that will again suit the sprinters.

Kittel knows he is getting closer but wants to concentrate on the stage result. “This morning I congratulated my former team-mates for the pink jersey that could become mine tomorrow but I don’t want to think about it. I just want to focus on another bunch sprint that will be very fast as well.

“It’ll suit me again and my confidence is very high now.”

In contrast, Dumoulin is very much thinking about the Maglia Rosa and the prospect of it travelling across to the German.

“It’s all very close together now, but the chances are pretty high that I will lose the jersey tomorrow if Kittel sprints again like that,” he accepted. “Top three is enough for him to take the overall lead. He just has to be in the right place at the right time, and if he is, he’s normally in the top three, so it sounds easy for him.

“We don’t have it really in our own hands tomorrow. If somebody else has to take it to Italy, please let it be Marcel. In our team, we always liked Marcel as a person and as a captain. Now he’s in another team but he’s still everyone’s friend.”