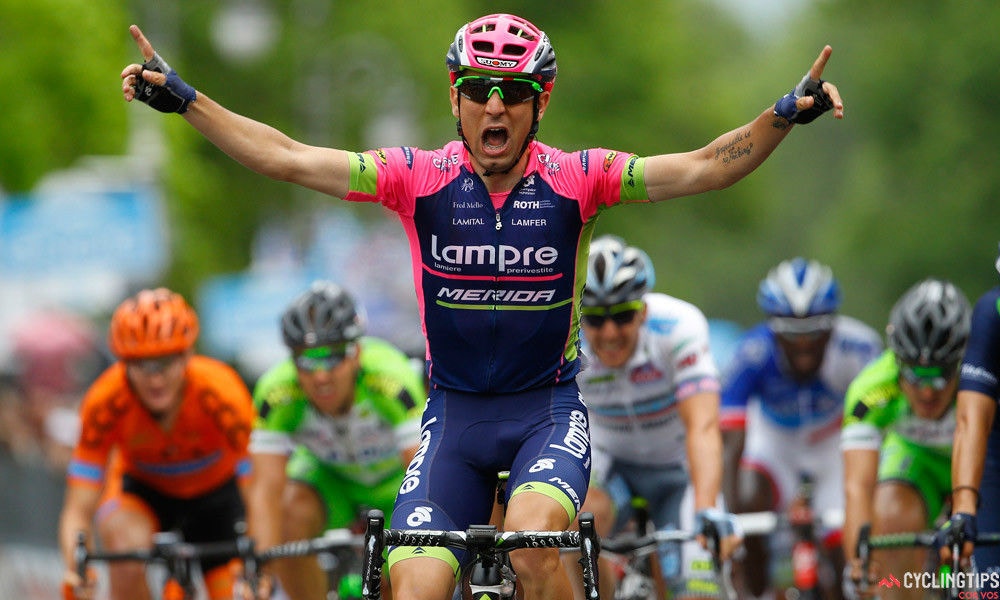 Diego Ulissi clocked up the first Italian success in this year’s Giro d’Italia, soloing to victory after attacking on the day’s final climb.

The Lampre-Merida rider got clear in a breakaway group inside the final 12.5 miles. These riders were 33 seconds ahead of the bunch and this provided Ulissi with the platform he needed. He crested the climb first and gunned it down the descent and then on to the finish, holding off chasers Tom Dumoulin (Giant-Alpecin) and Steven Kruijswijk (LottoNL-Jumbo).

Ulissi reached the line in Praia a Mare five seconds clear of the Dutch duo, while Alejandro Valverde (Movistar) and Gianluca Brambilla (Etixx-QuickStep) led in the chasing group a further one second back.

Overnight race leader Marcel Kittel (Etixx-QuickStep) got into difficulty in the lumpy finale and lost contact inside the final 12.5 miles. He finished a long way behind, giving Dumoulin the chance to retake the pink jersey.

The stage one time trial winner ended the day 20 seconds ahead of Bob Jungels (Trek-Segafredo) and Ulissi in the general classification. Kruijswijk and Georg Preidler (Giant-Alpecin) are a further four seconds back in fourth and fifth overall.

“It is a really nice feeling,” said Ulissi, celebrating his victory. “We are back in Italy so it is great to win in the Giro. When I was small I dream't of things like this. It is beautiful emotion.

“I started the season very well. The Classics were up and down but I am happy I kept my form to the Giro and today was great.”

While they would be ultimately brought back, the presence of a team-mate up the road helped take the pressure off Ulissi.

“Of course we had Matej [Mohoric] in the break this morning. We wanted to let the others do the job and rest behind,” he said. “When the [next] break went it was a bit nervous again. [Team-mate Valerio] Conti was brilliant in getting into that second group and that allowed me to come across to him. “I was a bit scared that if I attacked on the final climb I wouldn’t have the legs to get to the end. But Conti was great, and he did most of the climb for me on that hill. He was very good for me.”

Dumoulin had played down his Maglia Rosa chances before the stage but, as a former team-mate of Kittel, knew the race leader’s limitations on undulating terrain. He said that the opportunity to take over at the top became apparent during the stage.

“It was actually a bit harder than I expected,” he said after donning pink again. “We knew it was a tricky final and probably too hard for Marcel. When we were riding on it, I though it was definitely too hard for him.

“We decided to make the race hard in order to take pink. The race went very uncontrollable after the second GPM [King of the Mountains prime – ed.], but we had different cards to play as we had Georg Preidler and Chad Haga well placed still.

“We had Georg clear near the end in the case and we hoped he could take pink, but that group came back. I am happy to have pink again.”

Dumoulin admitted that there was a certain amount of gambling going on. He said that his team had to take a chance that other teams would close down the moves, and so they did. However he regretted that Ulissi wasn’t hauled back.

“I think it was the nice final on TV. It was not the right winner, I have to say, I hoped to win.”

After Monday’s first rest day, the Giro d’Italia resumed with a 125 mile fourth stage from Catanzaro to Praia a Mare. Marcel Kittel held the pink jersey courtesy of a strong opening TT performance and his double stage victories but, with a tougher parcours, he knew it would be very unlikely that he would hold onto the race lead on Tuesday evening.

The stage featured third category climbs at Bonifati (80 mile) and San Pietro (93 mile), as well as undulating roads from there until the finish. These included the steep Via del Fortino climb 6 miles from the finish, with some parts approaching 20 percent.

The quartet were chased by the Nippo Vini Fantini team, limiting their gains, but just before the junction was made the peloton eased off. As a result the break pulled clear again and built a lead of four minutes. One rider, Eduard Grosu [Nippo-Vini Fantini], did what he could to bridge.

However although he got to within a minute of the break, he cracked and slipped back.

The leaders pushed on and had almost three minutes heading onto the day’s first categorised climb. Mohoric was aggressive there, attacking twice, but was hauled back. Rosskopf also tried to go for the points but had to settle for second behind Boem. Brandle trailed over fourth, but caught the others on the descent.

Once onto the next climb, race leader Kittel and Sky’s Elia Viviani – first and second on Sunday – both slipped backwards. Fellow sprinters Arnaud Demare (FDJ) and Caleb Ewan (Orica GreenEdge) were also in difficulty. The fast pace put paid to the breakaway’s chances, with things coming back together before the summit.

Former race winner Damiano Cunego (Nippo – Vini Fantini) and Pirazzi (Bardiani – CSF) sprinted for the top, taking the points for first and second. The race leader and other sprinters were a minute and a half behind at the prime line, but managed to get back on after a furious chase.

Inside the final 25 miles Bonnafond and Dupont (both Ag2r La Mondiale) jumped clear and were then caught by a group of others. Further attacks followed, putting Kittel and others into difficulty once again inside the final 9.5 miles.

Heading onto the big climb with 6 miles to go, a dozen or so riders were 33 seconds clear. These included Valerio Conti and Diego Ulissi (Lampre-Merida), Moreno Moser (Cannondale) and Tim Wellens (Lotto Soudal).

On the early part of the climb Moser attacked hard and got a gap. Behind, Kittel was relaxed and smiling, having realized that the pink jersey was gone and resolving to enjoy his final minutes in pink.

Moser was brought back on a flatter section and Ulissi moved to the front of the group, which was now down to six riders.

Behind, Domenico Pozzovivo (Ag2r la Mondiale) attacked. The Italian is a general classification contender and his attempt was quickly closed down by Vincenzo Nibali’s Astana team.

Out front, Ulissi made his move and crested the climb first. He pushed on alone, knuckling down to an eight and half mile effort to the finish. He was just 20 seconds clear and knew it would be touch and go for him to make it.

Ulissi’s advantage continued to dwindle and was just 15 seconds with 3 miles to go. The chasers had double reason to ride hard: in addition to the stage win, they also had a gap over former race winner Ryder Hesjedal (Cannondale).

The Nibali group floored it to try to maintain this advantage. However Ulissi was riding strongly and, heading under the kite, he still had a solid gap. Tom Dumoulin (Giant-Alpecin) and Steven Kruijswijk (LottoNL-Jumbo) jumped clear in a bid to get him back but came up short, with Ulissi reaching the line five seconds ahead of the two chasers and six ahead of the big chase group.

Dumoulin’s effort secured another stint in the pink jersey for the Dutchman. He finished the day 20 seconds ahead of Bob Jungels (Trek Factory Racing) and Ulissi, with Kruijswijk and Preidler next in line.

This article was originally published on our sister site Cyclingtips.com