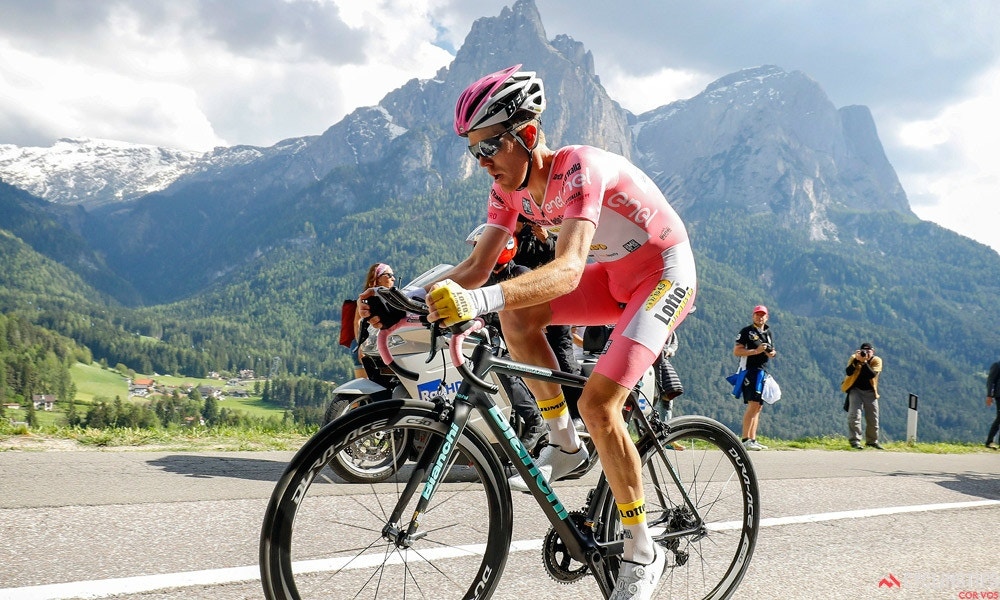 One day after donning the Maglia Rosa of race leadership, Steven Kruijswijk padded his race lead with a superb performance in the stage 15 mountain time trial. The LottoNL-Jumbo rider went within fractions of a second of setting the best time, being pipped by Alexander Foliforov of the Gazprom-Rusvelo team.

Alejandro Valverde (Movistar) fought back after his difficult showing on Saturday, finishing 23 seconds back in third place, while Foliforov’s fellow Russian and teammate Sergey Firsanov was a further seven seconds behind in fourth.

“This is unbelievable. It’s like a dream to win this stage,” said Foliforov. “I came to the Giro well prepared for this stage in particular because uphill time trials have always been my forte. I did my best but I didn’t expect to win. However, this is not going to be my last victory.”

Nibali finished over two minutes back, suffering due to unresponsive legs and also losing time due to a mechanical and resulting bike change.

As a result of his strong time trial, Kruijswijk is now two minutes 12 seconds up on Chaves, while Nibali is two minutes 51 seconds behind in third.

Valverde has narrowed the gap to the Italian, and is now 38 seconds behind him in fourth. Tinkoff’s Rafal Majka completes the top five.

“I really wanted to win the stage as well,” said Kruijswijk. “I finished second yesterday as well. I heard towards the end that I was close to the victory but most importantly I gained time over my rivals on GC.

“I did everything for that and I’m confident that I’ll be able to defend the Maglia Rosa during the last week.”

Chaves had started the day third overall but moved up a slot after Nibali dropped time. He was satisfied with sixth place in the TT and, more importantly, his ongoing progress up the general classification.

“The feeling is really good after these two stages in the mountains,” he said. “Today was very hard but we are happy because we gave the maximum amount of effort that we could and we got a good result.

“There is still a long way to go and we will continue to ride as we have been doing and stay positive going into the next stage.”

Saturday’s queen stage had undoubtedly taken a lot out of the riders, but there was a further test before Monday’s rest day. It took the shape of a 10.8 kilometer uphill time trial, starting at with just under two kilometers of flat roads in Castelrotto and then ramping skywards to the finish atop the Alpe di Siusi climb.

Aerodynamics would play a lesser part in the result than in regular time trials, with climbing ability being emphasized.

Early on Artem Ovechkin (Gazprom-Rusvelo) set a rapid time of 31 minutes 36 seconds, comfortably faster than those who went before him. This was beaten by teammate Aleksey Rybalkin, who was a minute quicker. Meanwhile Sky’s Ian Boswell was riding strongly, setting the provisional best time at the 4.4 kilometer time check.

He continued on to set a new mark at the finish, covering the distance in a time of 30 minutes 4 seconds. Tim Wellens (Lotto Soudal) did what he could to beat that but finished 11 seconds back.

Further down the slopes, Alexander Foliforov (Gazprom-Rusvelo) was making rapid progress and he then went quickest at the summit, beating Boswell by a massive one minute 25 seconds. Rein Taaramae (Team Katusha) appeared to be a threat, having set a new best at the first time check, but he was one minute 17 seconds back at the line.

Foliforov’s teammate Sergey Firsanov then set the best time at the first time check, and bumped Taaramae down to third at the finish. Michele Scarponi (Astana) did what he could to go for the win but while he was 41 seconds faster than Taaramae, was 36 seconds away from Foliforov’s time.

Provisional third was a strong result, but other big names were yet to reach the top.

After a strong Russian performance, there was some curiosity about how Ilnur Zakarin (Katusha) would fare. He went quickest at the first time check, while Alejandro Valverde (Movistar) was just three seconds back.

Zakarin continued his push for the line but faded on the slopes, taking a provisional fourth, 47 seconds off the best time.

Further back, Scarponi’s team leader Vincenzo Nibali was battling to save his Giro challenge but was not on his best form. He was losing ground to Kruijswijk, who was riding very strongly and apparently fortifying his grip on pink.

Nibali was fighting back, reducing his deficit from almost a minute further down the climb to under 50 seconds, but had to suddenly stop when his chain snarled up in his bike. His rear derailleur appeared to get twisted and he abandoned his machine, having to take a replacement from his team.

Valverde sprinted to the line, netting second, 23 seconds back. Chaves came in his own finish and ended the stage a further 17 seconds behind, provisionally fifth.

Nibali desperately tried to make up for his delay but ended up two minutes 14 seconds behind, netting only 24th. This was bumped down to 25th when Kruijswijk charged in towards the line, giving everything in a bid for the stage win.

He missed out by fractions, though, with Foliforov celebrating an unexpected result. He had been a strong under 23 rider, netting two stages in the Ronde de l’Isard and fourth overall in the Tour de l’Avenir in 2014, but this was clearly far better. As a result he ended the day with his first Grand Tour stage win.

“I was very nervous during the last minute of the race as I was watching TV,” he said. “I thought Kruijswijk was going to win. I still cannot believe that I’ve won a stage of the Giro d’Italia! It’s my best distance and uphill time trials are my specialty.”

He gave an example of what he had done in the past. “I won a similar uphill time trial at the GP Sochi in Russia [over a distance of 10.3km last year] and I came fifth at the Giro della Valle d’Aosta [over 9.2km from Champdepraz to Covarey, behind Fabio Aru, Kenny Elissonde, Joe Dombrowski and Ilnur Zakarin, and at just 18 – ed.].

“Today’s victory is very important for the team, our sponsors and me, bearing in mind that we’re a wildcard team. It shows that we can fight and win stages.”

Kruijswijk wanted the win but was still pleased. “For me it’s a historic day. I lost the stage by almost nothing but I gained more time that I could have hoped for on my rivals,” he said. “I never expected to be in the lead at the end of the weekend before the last week.

“I’m in my best shape ever. As it was a 30-minute time trial, I had to start fast in order to not lose time at the beginning, then I found my rhythm, although the last two kilometers were very hard.”

While he has a comfortable overall lead, he won’t take anything for granted. “I haven’t won the Giro yet but I hope to defend the Maglia Rosa till the end. I’ve got faith in my team, although Chaves, Nibali and Valverde are equally dangerous.

“I don’t know the coming mountain stages with precision but the last two will be very demanding because of the altitude.”