Three in a Row for Lotto Soudal at The Giro d'Italia 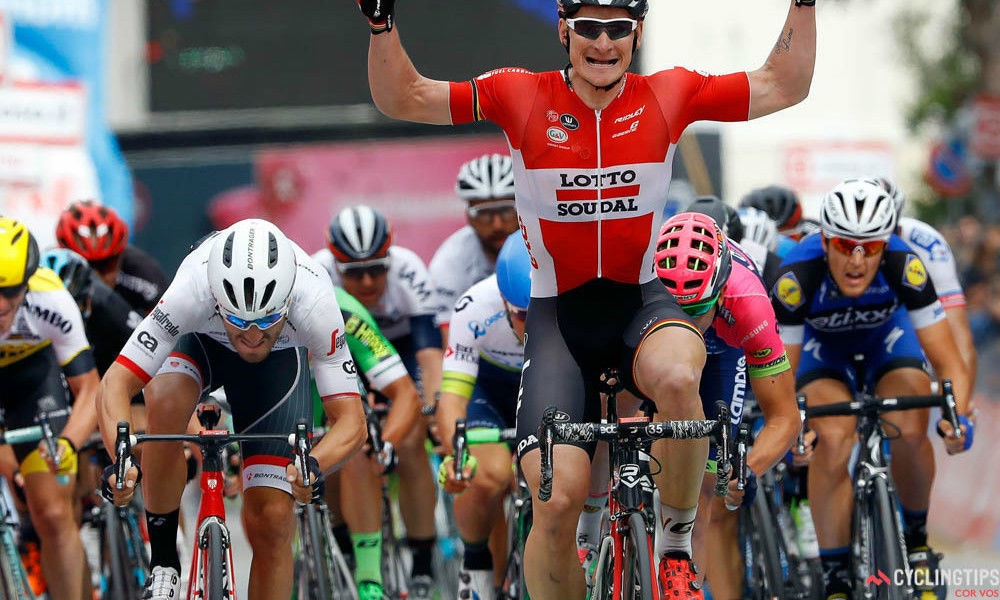 Showing once again the power that won him stage five, Andre Greipel blasted home first on stage seven of the Giro d’Italia, hitting the line first in Foligno. The success was the third in a row for Lotto Soudal, following Greipel’s triumph in Benevento and Tim Wellen’s mountain-top victory at Roccaraso on Thursday.

Greipel was set up perfectly by his team, although his leadout man Jurgen Roelandts was passed by several teams inside the final 600 metres. One of those was Orica-GreenEdge, seeking to set things up for Caleb Ewan, but the Australian didn’t have the horsepower to hold on and faded to fourth.

Greipel’s momentum was in the other direction, carrying him past several riders and on to the chequered flag. He beat Giacomo Nizzolo (Trek-Segafredo), Sacha Modolo (Lampre-Merida) and Ewan, with Enrico Battaglin (LottoNL-Jumbo) and Matteo Trentin (Etixx-QuickStep) completing the top six.

The latter stepped forward after Marcel Kittel was delayed by a mechanical inside the final six kilometres and lost out on his chance.

“We knew it was going to be a tricky finish with all the corners and the crosswind in the last six kilometres we just tried to keep me out of the wind. The guys did an amazing job. I could save my energy for finding gaps and for launching the sprint.”

He said that the final two from the team hit the front a bit earlier than planned, meaning he had to improvise inside the final kilometre.

“I was looking for a wheel to follow and thought it was going to be too late, but I was lucky enough to find a gap to get through,” he explained. “I still had power left in my legs. I was just looking for a gap. I was close to the best ridersr in this final corner. Modolo stayed on his line and I was able to launch my sprint.”

Three wins in three days is a superb achievement, and one which hasn’t been done by any team in several years. “Before this stage today we were already really happy with the Giro so far,” he said. “We have three out of seven stages so it is really fantastic for us. We are enjoying the moment.”

Overnight race leader Tom Dumoulin finished safely in the main bunch. As a result the Giant-Alpecin rider retains the Maglia Rosa for another day.

“It was pretty hard,” he said, speaking of the stage. “The beginning was really hard. Nippo-Fantini missed the break like they did in other days, and then they chased it down again. It was very uncontrollable after the first climb but we did things really well. Then we had a good break at the front so things were very controlled. Still hard, but controlled.”

The race continues Saturday with a 186 kilometre race from Foligno to Arezzo. It is mainly flat, but includes two climbs. The second of those is the second category Alpe di Poti and summits just under 20 kilometres from the line. Crucially, that climb includes gravel roads.

Dumoulin said he is not worried by that. “I did two times the Strade Bianche and I really liked it,” he said. “We will see tomorrow [how things go]. I am looking forward to it, actually.”

Following the uphill finish on Thursday, Friday’s seventh stage of the Giro d’Italia was one that looked destined for the sprinters. Although the 211 kilometres between Sulmona and Foligno would be run off on undulating roads, many felt that a big bunch finish was the most likely outcome.

That wouldn’t stop people from trying, though, and the second category climb of the Le Svolte di Popoli just 20 kilometres after the start was one possible launching pad. Stefan Kung (BMC Racing Team), Jay McCarthy (Tinkoff) and Patrick Grestch (Ag2r-La Mondiale) took up that option, and went clear soon after the drop of the flag.

They crossed the summit in that order, while mountains leader Damiano Cunego (Nippo-Vini Fantini) tried to fortify his advantage but lost his grip on the jersey when Tim Wellens beat him for fourth.

The Lotto Soudal rider had racked up a cluster of points en route to winning Thursday’s stage, and was close enough to take over at the top.

The climb proved to be a tougher one than expected and it caused the peloton to break up into several parts. The first big group caught the break after the summit, bringing an end to that move. Riders such as Marcel Kittel were stranded behind, but there was later a regrouping.

Ciccone beat Denifl and Kung to take the intermediate sprint in l’Aquila, after which the break built its lead to two and a half minutes with 90 kilometres covered.

That gap continued to inch upwards. Meanwhile, back in the bunch, Movistar’s Javi Moreno crashed and sustained a suspected fractured collarbone. That brought his Giro to an end.

With 70 kilometres left the six riders out front were three minutes clear. They continued on to the fourth category climb of Valico della Somma, where Martinez was first to the top. Cunego did what he could to bridge before the summit in order to recapture the mountains jersey from Wellens, but was unable to do so.

The break’s advantage was being chomped into on the climb and Kung decided to go it alone on the descent. He clipped away and headed into the final 25 kilometres almost a minute ahead of the peloton, which had caught the others.

Rigoberto Uran’s Cannondale team were drilling it at the front, trying to break things up in the crosswinds. The squad was unable to cause any lasting splits, but the impetus hacked into Kung’s lead.

With 12 kilometres to go the leader had just 12 seconds, making his recapture certain. The junction was finally made inside the final seven kilometres, prompting Lotto Soudal to hammer at the front in order to try to set things up for Andre Greipel.

That goal was helped by a mechanical issue for Marcel Kittel with just under six kilometres to go. While the Giant-Alpecin rider was given a change of bike, he had no chance to get back up to the front before the finish.

Australia’s Adam Hansen was doing a mammoth turn at the front for Lotto Soudal, driving for several minutes. His teammates took over under the three kilometre to go banner, but Greipel had just two in front of him and so it remained to be seen if they had done too much too soon.

Sean de Bie pulled off and this left Greipel’s leadout man Jurgen Roelandts on the front. He led towards the kite, but Lampre-Merida took over going under the banner.

Roelandts had more to give and after dropping back to second in line, moved to the front again. Greipel bided his time, but lost out when Orica GreenEdge pushed forward for Caleb Ewan.

However the big German didn’t panic, blasting through to take win number two and, with it, victory number three for Lotto Soudal.

It was his 19th career Grand Tour stage win, putting him just one victory behind the tally of compatriot Erik Zabel.