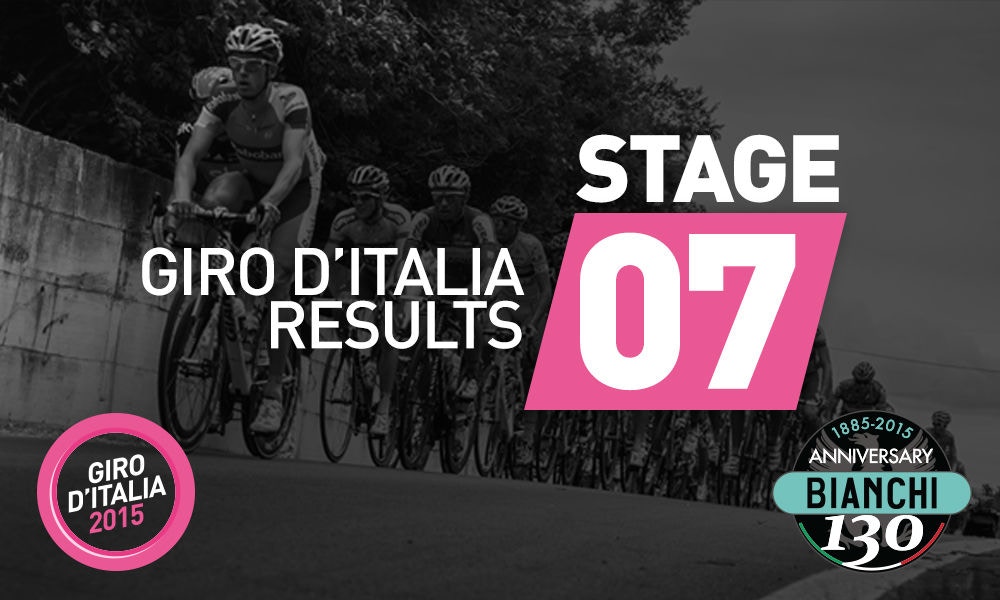 It was Italy's day to celebrate on Stage 7 of the Giro d'Italia, with home-grown Diego Ulissi of Lampre-Merida (only recently returned to cycling following a nine-month suspension) crossing the line to victory, just edging out Movistar's Juan Jose Lobato and Orica-GreenEDGE's Simon Gerrans.

The stage also saw GC favourite Alberto Contador grit through the arm injury he sustained in yesterday's dramatic crash and hold onto the pink jersey. Just - apparently he finished the stage saying he didn't quite know where to put his hands given the pain. The Spaniard reportedly rode the stage with lower tire pressure to help minimize impact to his shoulder. The question now is whether or not he'll be able to endure with the mountain stages closing in.

Perhaps one of the most striking images from the Giro so far however, is Nippo-Vini Fantini's Daniele Colli who fared far worse than Contador in yesterday's crash; images of his arm bent at a right angle, in the wrong direction, have flashed around the world.

As anticipated stage 7 was a day that would splinter the peloton given the climbs and distance - the longest stage in this year's Giro - and leave the pure sprinters in its wake. Sensing what lay ahead the peloton seemed in no great haste to hurry, despite an early break away.

The three riders' lead was soon diminished as the peloton closed the gap, only to have it splintered again by a four-man break-away of Androni-Giocattoli's Marco Bandiera (who claimed several sprint points and even held up a happy birthday note to his father at one point), Bardiani-CSF's Nicola Boem, CCC Sprandi's Nikolay Mihaylov and Nippo-Vini Fantini's Pier Paolo de Negri. This group eventually clawed an 11-minute lead over the rest of the riders. An increasing head wind tested the metal of the four and contributed to the peloton's efforts to shave minutes off their lead so that with 200km still remaining, they only retained an 8:18 advantage.

With 12.5 mile from the finish line Orica-GreenEDGE, Team Sky, Trek Factory Racing, Lotto-Soudal, Giant-Alpecin and Astana were all taking turns until the final mile when order was abandoned, no leadouts established, and individual riders were left to fend for themselves.

An uphill sprint finished the stage, with Ulissi clinging on to just gain his first victory of this year's Giro.