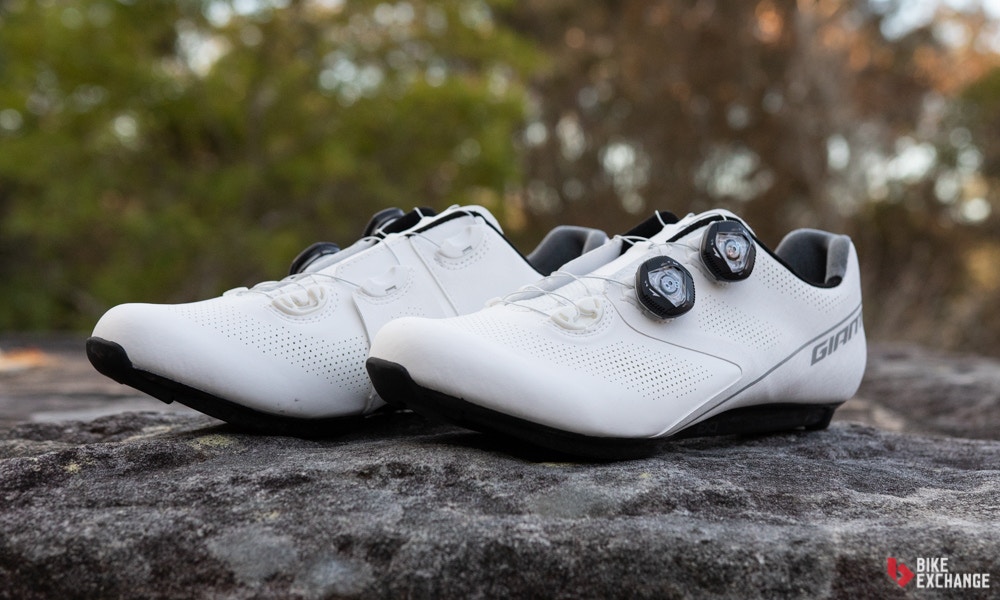 First seen on the feet of Team Sunweb riders at the Santos Tour Down Under in January and just about every WorldTour race since, Giant has been busily working on new performance road footwear. At the top of Giant’s revamped 2019 road footwear range is the Surge Pro, CyclingTips’ Dave Rome has received a pair of the Surge Pro for review, with just a couple of rides on them, he shares some first impressions.

From afar, the new Surge Pro look much like any other premium road race shoe, there are two Boa dials per shoe for retention, the perforated synthetic leather upper offers a smooth finish with few seams and the heel is lined with a two-way material designed to stop the foot from pulling up and out. However, flip the shoe over, take a look at the one-piece carbon sole and it’s clear the Surge is like no other. 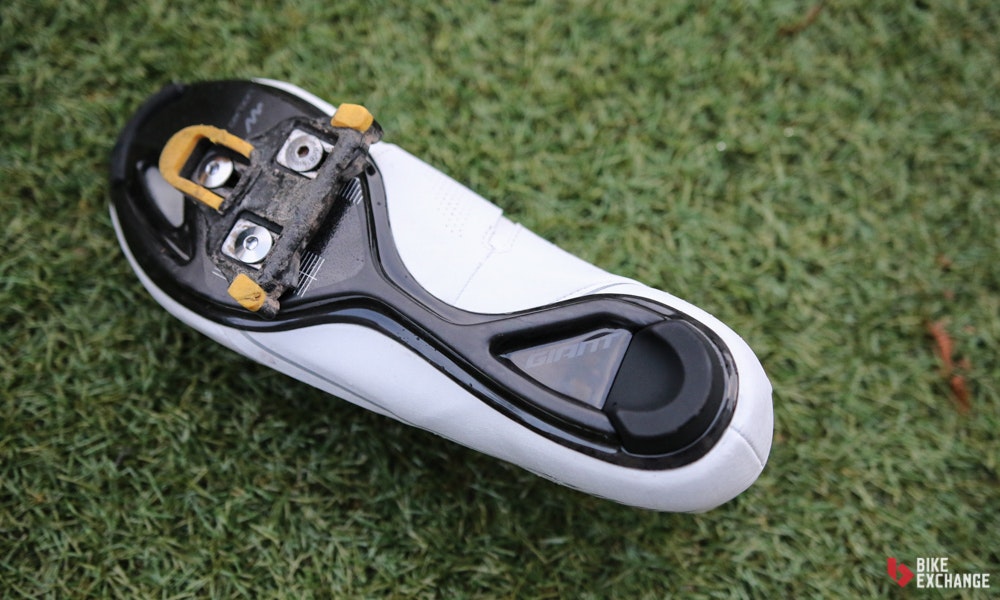 The key point of difference is Giant’s ExoBeam sole, which following the traditional width cleat mounting surface at the forefoot, pinches down to a slim beam across the mid-foot, before spreading wider again at the heel. This design seeks to create a sole that’s just as stiff as its competition along its length but promotes natural movement between the heel and forefoot. Giant claim this ExoBeam technology “helps produce an efficient pedal stroke, reducing strain on the knee and ankle joints”.

With an unusual sole, the attached upper is equally unique and a look inside the shoe reveals it's mostly seam-free. The quick-release and micro-adjust BOA dials are responsible for providing support to the foot’s arch and work with Giant’s “ExoWrap”, a strap that extends from the instep and provides an additional panel of support. Tighten the lower Boa dial and it pulls this strap up and over the instep, it's designed to resist the foot from collapsing inward where there is otherwise no sole support. 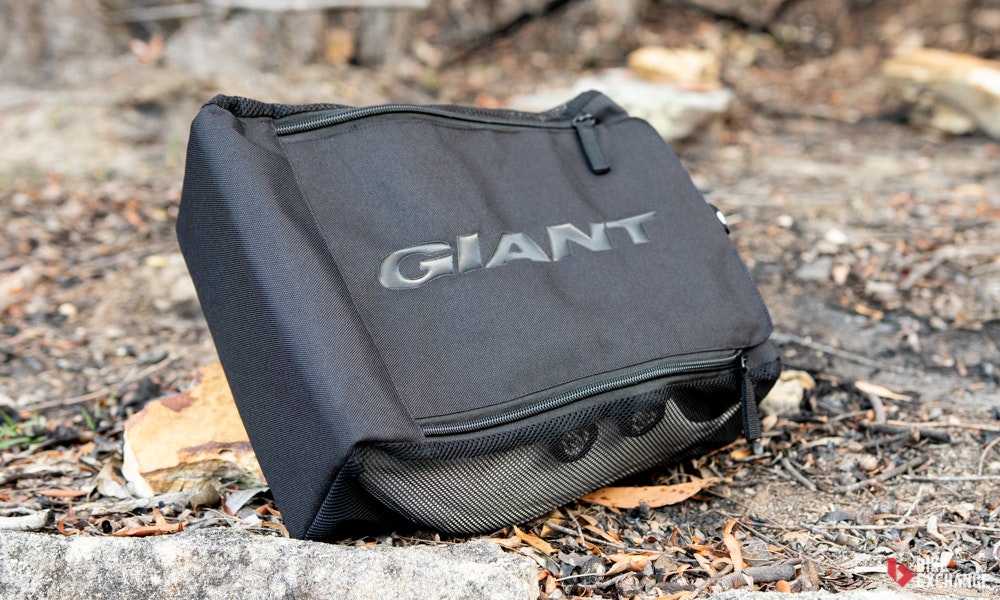 Other features include a comfortingly large replaceable heel gripper and fore-aft adjustable cleat inserts. The quality innersoles include a choice in two arch support heights, and the shoes are supplied with a useful carrying bag. According to Rome, his EU43 samples weigh 517g for the pair, with the innersoles accounting for 32g of that figure.

“I only just got my feet into these shoes and so it’s too early to tell how well they meet the claims. So far they seem comfortable, similar in shape to a Shimano shoe and well thought-out, but I’m keen to see how the lack of rigid support at the arch holds up. That lack of support also has me concerned about walking on uneven terrain, where the unprotected upper could get scuffed. I’ll know more soon enough,” tells Rome. 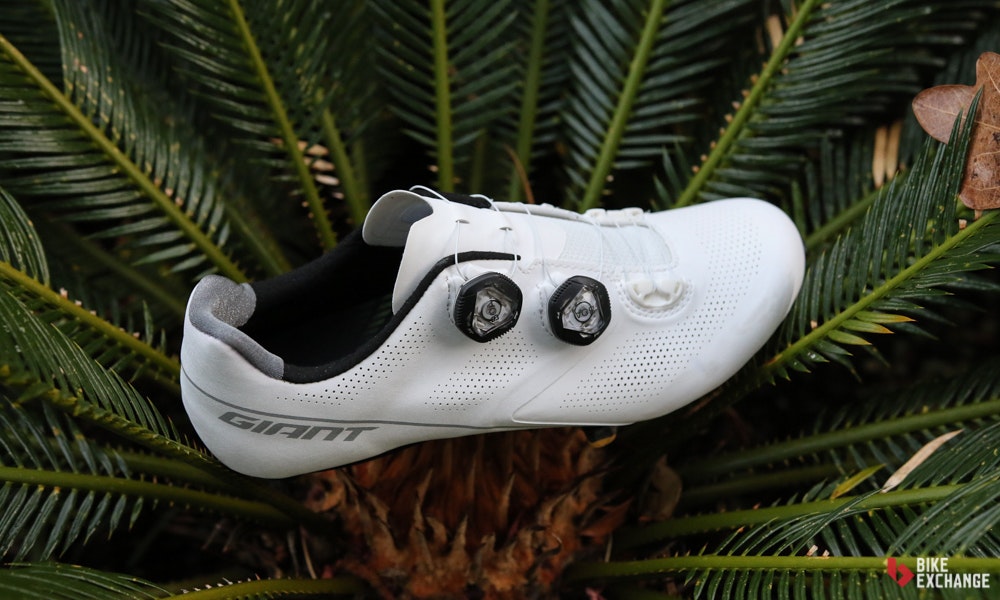 The lower-level versions of the Surge retain many of the features unique to Giant, with the Surge Elite HV using a lower-cost carbon and glass-fibre reinforced sole where the Surge Pro features a full-carbon version. Likewise, the Surge Pro’s upper is more premium in that features laser-cut perforations and welded seams, producing a material that’s lighter and more resistant to stretching. The base-level Surge Comp features a nylon-composite sole, a stitched upper and sees one Boa dial replaced with a velcro strap.

The Surge Pro shoes are available in either black or white.

Stay tuned for a comprehensive review of the new shoes over on CyclingTips in the coming months. In the meantime, check out the wide range of road cycling shoes available from leading retailers across the country right here, at BikeExchange