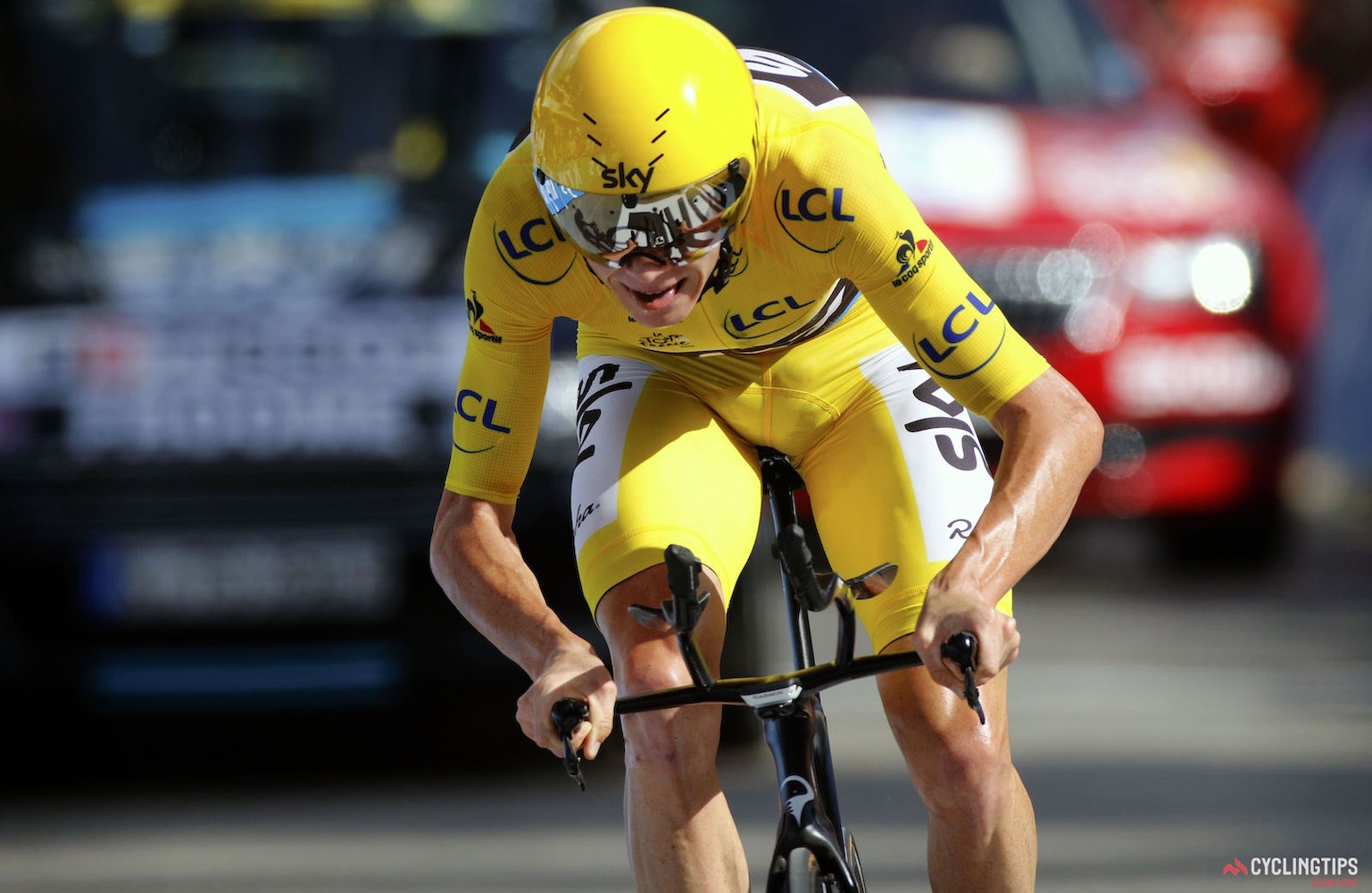 Two-time Tour de France champion Chris Froome held off all comers on the stage 18 uphill time trial Thursday, taking the stage win and extending his lead in the general classification.

Fabio Aru (Astana) and Richie Porte (BMC Racing) finished with the same time, 31:16, but the Astana rider was awarded third place on the stage by thousandths of a second.

“I really didn’t expect to beat Tom today,” Froome said. “Pacing was key. I really started off quite steady and controlled that first part, and then just gave it everything I had over the top and the last part. I’m really, really happy with that.”

Froome kept his maillot jaune and extended his lead, but behind him the fight for the remaining two podium spots is much tighter. Positions second through sixth began the day separated by exactly two minutes, and though there was no change in the standings, at day’s end they were separated by just 1:08.

Porte was the biggest mover on the day, gaining back considerable time on his rivals. He remains in sixth and trails Froome by 5:00, but is closer to the podium. He sits 44 seconds behind third.

Bauke Mollema (Trek-Segafredo) and Adam Yates (Orica-BikeExchange) still hold second and third overall, respectively. Yates beat Mollema by two seconds on the stage, but he trails the Dutch rider by 24 seconds. Mollema is 3:52 behind Froome.

Nairo Quintana (Movistar), who spoke of attacking in the Alps when the Tour began, seems to instead be fading in the third week. The Colombian lost more time to Froome and his rivals for the podium. He sits fourth overall, at 4:37. Romain Bardet (Ag2r-La Mondiale) is fifth overall, 4:57 back.

Starting in Sallanches and ending in Megève, the peloton tackled the second and final time trial of the 2016 Tour. The solo effort required the riders to navigate a hilly 17km route; the stage included only 10 metres less of climbing than the first time trial, 650 metres (2,132ft), but was half the distance. A tricky final kilometer, which included a few tight corners, caught a few riders out and was not to be underestimated.

Fabian Cancellara (Trek-Segafredo) was a notable non-starter, pulling out of the Tour and going back across the border to his home in Berne, Switzerland, were the Tour had spent the last three days.

“This was not an easy decision to take, but I feel it is the right one,” Cancellara said of his departure from the Tour. “I don’t like withdrawing from a race, especially not when our GC leader is in second place at four days from Paris. With some really hard stages ahead of us my support would naturally be more limited so we took the decision together to withdraw. It was a hard Tour for me: a lot of stress and I feel tired. If I want to be good at the Olympics, I need rest.”

Alexis Gougeard (Ag2r-La Mondiale) was one of the first riders to roll down the start ramp and he set an early benchmark of 33:06, even after crashing during his time trial.

“I crashed 100 metres before the line”, Gougeard said after his effort. “There was a curve to the right. I underestimated the danger when we reckoned the course by car this morning. On the other hand, I thought the curve at 350 metres was more dangerous and I could have gone faster there. I’m very disappointed because I wanted to do a good time trial. I wouldn’t have won it but I was aiming at a good time to reassure myself as nothing has gone well for me at the Tour de France so far [Gougeard is a rookie]. At the beginning of the race today, I was going well. I was able to push at the changes of rhythm. Physically, I’m well, but psychologically, the Tour is hard.”

Ion Izaguirre (Movistar), a strong climber, set a fast early time of 31:46 and it appeared that would stand for some time, but shortly after, Belgium’s Thomas De Gendt (Lotto-Soudal) came through and beat Izaguirre by just over a second.

While De Gendt was settling into the hotseat to watch the other riders finish, Dumoulin was scorching the course. The Dutchman flew by Jan Bakelants (Ag2r-La Mondiale) at the second checkpoint, leaving the Frenchman to nod his head in disbelief.

Dumoulin smoothly carved the final technical corners and sprinted across the finish line to beat De Gendt by 41 seconds.

“I’m pretty satisfied but I think I didn’t ride my very best time trial,” Dumoulin said. “Froome showed he was simply the best. In the very steep part in the beginning I felt good and performing well and then I lost lots of energy in the intermediate section. I spent a long time in the hot seat but I expected it would be very hard. I knew it would be close.”

Vincenzo Nibali (Astana), who is riding the Tour in support of Fabio Aru and to prepare for the Olympic Games, set a respectable time of 32:06, more than a minute behind Dumoulin.

“I was informed of my intermediate times via radio so I knew Tom Dumoulin was ahead and riding very strongly”, the 2016 Giro d’Italia champion said. “I’ve tried to do the best time trial possible. I’m happy with my ride and how I’m helping Fabio [Aru] in this Tour. The Giro d’Italia has taken a lot of energy out of me. Having good days and bad at the Tour after the Giro is just normal. It’s not easy to ride two Grand Tours in a row. For now I’m focused on making it to Paris. Then I’ll think of the Olympic Games. It’s an important goal because it might my last chance for getting a result.”

THE BATTLE FOR THE PODIUM TIGHTENS

The heavy hitters began taking the start and the intermediate check point times began to fall. Porte stormed through the opening 6.5 kilometres and beat Dumoulin at the top of the Côte de Domancy by nine seconds. The Tasmanian kept pace with Dumoulin through the opening kilometres on the stage 13 time trial as well, but faded towards the end, so it remained to be seen how the BMC would fair. Porte reversed his gain into a loss over Dumoulin at the second time check and trailed the Giant-Alpecin rider by 10 seconds.

Quintana rode through the first time check 47 seconds behind Porte, clearly not on a good day.

Yates, the Tour’s Best Young Rider, rode strongly in the opening kilometres and was only 10 seconds behind Porte at the first time check, a single second behind Dumoulin.

Aru blitzed his solo effort and came home a mere 12 seconds behind Dumoulin, with a time of 31:16. Meanwhile, Quintana was going through the second time check out on course and was continuing to lose significant time to the other contenders.

Porte safely navigated the chicane in the final couple hundred metres of the stage and finished in the same exact time of Aru, 31:16. He would be awarded third place, having lost out to Aru by thousandths of a second.

“I had a very good time trial,” Porte said. “I couldn’t have gone faster. I’m really looking forward to taking my chance and fighting for that podium. What I did today shows that I’m climbing really well at the moment. The team is fully behind me. The podium is so tight. I’ll have to see where to take some time back.”

The maillot jaune of Froome, who started the day with a comfortable advantage, was quietly extending his lead in the general classification over the rivals closest to him.

Froome started out the time trial slower than the others, but continued to move up the leader board through the timechecks out on course. 10 kilometres into the effort, at the second timecheck, Froome only trailed Dumoulin by 10 seconds and was equal on time with Porte.

With 3.5km to go, Froome had reversed his deficit into an advantage and led Dumoulin by 13 seconds. The “skinsuit jaune” stormed through the final climb and used his descending skills to further his advantage, taking his second stage win of the 2016 Tour.

“A big part of my success today was selecting the right equipment,” Froome said. “When I saw the course, I thought I’d ride with the road bike, but after the team analyzed it, we opted for a full TT set up. The Pinarello TT bike isn’t 9kg (19.8 pounds) anymore. The other aspect was pacing. For all those who started too fast, it was easy to get carried away. I didn’t. I had some targets in my head with the numbers. I’ve had to adjust them more or less on the way but pretty much it went all according to the plan.

“I think I have a great advantage with two days to go. I keep the yellow jersey on my shoulders, but the next two days are really tough. The main thing for me is to stay out of trouble. I will not try to win a stage uphill.”

Mollema and Yates had solid rides, and while they lost time to Froome, they kept their positions in the general classification. The battle for the podium is very tight, however.

Removing Froome from the picture, this is where the next-best six riders sit on the general classification:

“Today wasn’t my best performance but it was also not too bad,” Yates said. “It’s pretty normal to be tired, I suppose. The time trial was okay, nothing special, but nothing bad. I rode flat out to the first checkpoint and then I kind of faded. But I’m satisfied. I’m still on the podium. But there are a lot of guys to watch and make sure they’re not taking any time. Richie [Porte] is the strongest, he’s the main guy to get to the podium. With two days to go, I’ll take every stage as it comes and try not to lose any seconds.”

Quintana suffered through the time trial and finished the stage in 10th place, 1:10 behind Froome.

“I wasn’t expecting to be feeling this way,” Quintana said. “It’s not fatigued how I feel, but my body doesn’t respond properly, either. It might be some sort of allergy around which has hit me during the last few days. My legs don’t simply get as much oxygen as I need. I hope that rain falls during the next days, so I can feel better and hope for the podium. Despite not finding that great form, at the moment it doesn’t look like a bad place to be in, fourth and ready to fight for the Tour de France podium.”

“I’m very happy, I rode a good TT,” Bardet said. “I had good sensations. I really enjoyed it. There are still some nice stages ahead and we will now have to attack on stages that suit my abilities better than a TT. I hope to find a terrain for my attacking ambitions in the next few days.”

Friday’s stage is the final summit finish of the 2016 Tour. Stage 19 travels 146km (90.7mi) from Albertville to Saint-Gervais Mont Blanc. Attacks are sure to come on the Category 1 Le Bettex (9.8km at 8%) finishing climb.