Find a store Blog
‹ back
Home
Blog
Guides
Rails, channels and facelifts: what all of the options mean for Fizik’s Aliante saddle

Rails, channels and facelifts: what all of the options mean for Fizik’s Aliante saddle 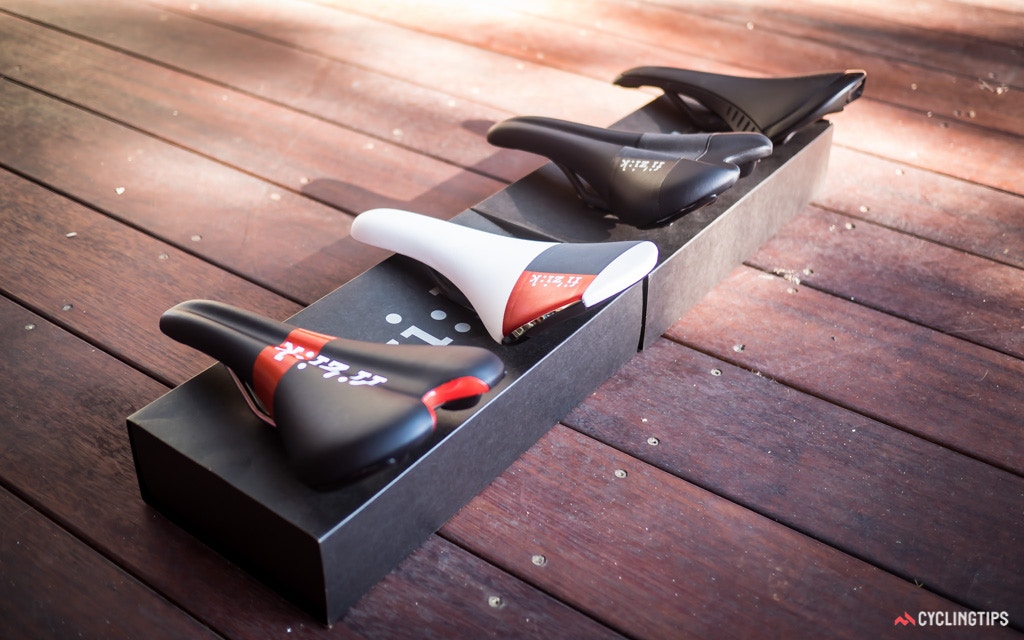 Fizik is well known for its race-oriented saddles, and in recent years, the company has enlarged the number of options for any given model. Options now include different rail materials (steel, aluminium and carbon) and pressure channels (nil, 7mm and 20mm).

But what do all of these options mean for the comfort and performance of the saddle? In this review, Australian tech editor Matt Wikstrom takes a look at five versions of the Aliante to answer this question.

Fizik was established in 1996, purpose-built by Selle Royal to serve as the Italian company’s racing brand. After spending decades making saddles for the recreational end of the market, the company decided that it needed a fresh identity to gain a foothold in the performance end of the market.

After two decades, I think it’s fair to say that the strategy worked. Fizik is now strongly associated with the professional peloton and the company’s catalogue has grown considerably. In addition to a multitude of saddles, Fizik has branched out to tackle the other contact points on the bike with a range of shoes, seatposts, handlebars, stems and bar tape.

All of Fizik’s saddles are made in Italy and for several years, the company has been using its “Spine Concept” to market its road saddles. According to this concept, road riders can be classified as one of three “animals” based on their flexibility — those that can easily touch their toes are classified as a “snake”; those that have trouble are a “bull”; and those that fall in between are a “chameleon” — and there is at least one saddle model in Fizik’s catalogue to suit each animal. The saddles that Fizik prescribes for each kind of animal have a distinct shape and profile. For snakes, the saddles are narrow with a flat profile, like the Arione; bulls are prescribed wider saddles with a pronounced dip, like the Aliante; and chameleons get something of a blend in a wide saddle that has a very mild dip, such as the Antares.

With so many options on offer, one has to wonder what they all mean for the comfort and performance of the saddle. Fizik recently gave me the opportunity to compare five of these options in order to answer this question.

I have been using an Aliante Gamma for many years, and while my flexibility is more like a chameleon than a bull, the shape is a proven favourite. As the base model in Fizik’s current range of bull-suitable saddles, the Gamma is both the cheapest and heaviest of all the options, and the perfect baseline for this comparison. The Aliante Gamma has K:ium (metal) rails and a carbon-reinforced nylon shell.

The Aliante VS K:ium is identical in every way to the Gamma except for the padding, where extra material has been used to create a 7mm pressure channel that runs the length of the saddle. This channel doesn’t alter the profile of the saddle but it does add a little to the overall height. The Aliante VS K:ium has metal rails and a carbon-reinforced nylon shell.

The Aliante VSX Carbon also has a pressure channel, but at 20mm, it is much deeper. Once again, the profile of the saddle is essentially unchanged except that it is a little taller again due to the extra padding that is used to create the channel. This saddle has carbon braided rails for ~30g weight saving when compared to the Gamma. The Aliante R3 was created as part of a recent facelift for the long running saddle shape. Four models were added to the catalogue (00, R1, R3 K:ium, R3 Carbon braided, and R5) with a new base that is longer (275mm vs 265mm) and has extra dip (~8mm vs ~5mm). The swallow tail-shape that has long defined the Aliante was replaced with a simple curve that accounts for much of the extra length of the saddle. In this instance, the Aliante R3 Carbon Braided has a fibreglass-reinforced shell and as the name suggests, carbon braided rails, for a total weight saving of a little over 70g when compared to the Gamma. The Kurve Bull has carbon braided rails and a Kevlar-reinforced composite shell.

While all of the saddles shared the same overall shape and dipped profile, they were quite different when viewed from the rear. At one end of the spectrum, there was the Kurve Bull with a very round shape and obvious peak; at the other end, there was the VSX, where the top of the saddle was obviously squared-off with a broad flat section at the centre of the saddle. A look at the rear profile of the saddles. From left to right, Aliante R3, Kurve Bull, Aliante VSX, Aliante VS.

PUTTING THE SADDLES TO USE

The surest test for any saddle is to spend some time sitting on it, and the only meaningful way to do this is to install it on a bike and start riding. But before I get to that, a few notes on the results of the “thumb test” that most riders will perform after picking up a saddle.

The Aliante Gamma is a reasonably plush saddle that yielded pretty readily to my thumb. By contrast, the R3 was considerably firmer. Of them all, the Kurve Bull was the firmest saddle, while the VS and VSX were the softest (but only above the channel). Interestingly, the sides of the Kurve Bull were very flexible compared to the Aliante models, which were essentially unyielding.

Once each saddle was on the bike, the differences were much less obvious. I was able to use the Gamma and VS interchangeably, and while the VS felt plusher, I didn’t find that it offered extra comfort for long rides. The only noteworthy difference was a slight change in the saddle angle: I use the Gamma with the nose tilted up very slightly, while the VS was better suited to me when set dead-level. The Aliante VSX Carbon (left) and R3 Carbon Braided saddles use carbon rails in a “prong” arrangement compared to the closed “mobius” design that loops under the rear of the Kurve Bull (right).

The R3 was also an easy saddle to like even though it was firmer under my thumb. I had more trouble finding the fore-aft sweet spot for this saddle, but after a couple of nudges forward and back, I was able spend plenty of time in the R3 with ease.

The VSX was a pretty good fit for me, but there were two issues that stopped me from making more use of this saddle: first, the carbon rails offered a little less setback adjustment that the K:ium rails on the VS, so I couldn’t get the saddle into its sweet spot for the bikes that I had on hand. Second, I didn’t like the extra width created by the deeper pressure channel, so I found myself reaching for the VS instead.

The Kurve Bull was the only saddle that didn’t work for me. My sit bones suffered terribly while riding with this saddle, which I presume was due to a lack of support. Whether this was due to the pronounced curve of the saddle, or its flexible wings, I can’t say, but I quickly abandoned it in favour of the other models.

Up until this point, I had tested all of the saddles while wearing padded shorts, so I reasoned I might need a more sensitive measure to appreciate any minor differences in comfort. Thus, I tested the relative comfort of each saddle over a short stretch of an unpaved path while wearing a pair of cotton walk shorts and undies. Once again, the Aliante Gamma (with K:ium rails) served as my baseline for comparison. Under these conditions, the VS with K:ium rails soaked up hits and chatter a little more effectively. Swapping to the VSX and carbon rails made no obvious difference, nor did the R3 (with carbon rails), such that all three saddles were marginally more comfortable than the Gamma.

It was much harder for me to assess the Kurve Bull, since it quickly became uncomfortable, but my impression was that the saddle wasn’t obviously firmer than the Gamma.

The results from this comparison suggest that carbon composites have no effect on the compliance or comfort of Fizik’s saddles. Instead, they simply offer a modest weight saving, where the biggest savings come at a pretty hefty premium.

Paying more for an Aliante with a pressure channel will provide the buyer with marginally more comfort, but it does influence the fit by creating a broader and flatter region along the centreline of the saddle. Likewise, the facelift that yielded the Aliante 00, R1, R3 and R5 has modified the shape of the saddle for a slightly different fit, while the Kurve Bull can be considered a very different saddle.

There is a general perception that carbon composites not only save weight for a component, but can also be utilised to improve comfort and compliance. I found no evidence that this applies to Fizik’s Aliante range, so the only reason to consider this kind of upgrade is for a modest weight saving.