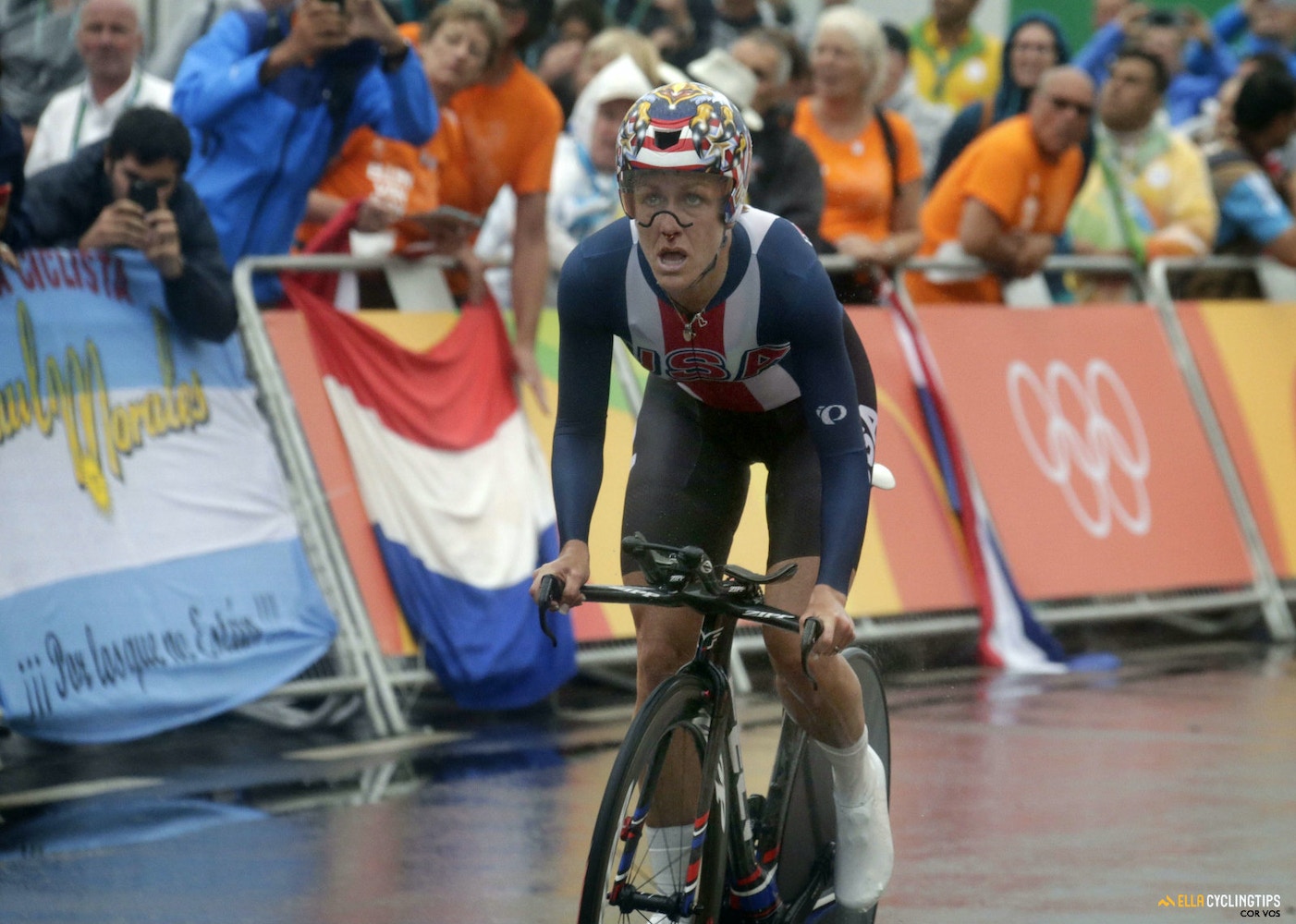 “I want a third gold medal,” American Kristin Armstrong had told media on the eve of the 2016 Olympic time trial, and it was that will combined with the experience of a 13-year professional career that earned her a third straight Olympic gold medal in the race against the clock on Wednesday, a day before Armstrong’s 43rd birthday.

The last to start the time trial, all eyes were on Armstrong. Rain and wind made an already technical course more treacherous as riders had to navigate steep descents and sharp turns in the wet. Riders were caution and it became clear early on that experience would pay off in today’s race.

With three Olympics already under her belt and two gold medals to her name, none of the riders came into the race with as much experience as Armstrong. That didn’t make it any easier for the American, however, who gave it her all and came across the finish with a nose bleed and fell to the ground in exhaustion.

But she was soon joined by her son, and a huge sense of relief and accomplishment beamed from her face as she held up three fingers to the camera.

“I don’t have words to describe it. When you’ve already been two times at the pinnacle of the sport, why risk coming back for the gold medal? The best answer I can give is that I can. Today the stars aligned,” Armstrong said after finishing.

The extra effort it took to win, she said, was inspired by Mara Abbott who gave an heroic effort during Sunday’s road race and came breathtakingly close to a medal.

“For the past 24 hours, Mara has been leaving me notes. I found one in my coffee cup yesterday telling me I’m a champion. I found another one on my brush. There was another one on my pillow and another one on my podium bag. The support she’s turned around since her race on Sunday has been phenomenal and that is what a team is all about. I feel that we’re all genuinely happy for one another and it’s given me great pleasure to represent the team. I haven’t experienced this in all of my years.”

Armstrong is the first cyclist to win three gold medals in the same discipline. Armstrong with her son. After a dramatic road race last Sunday, which saw Annemiek van Vleuten (Orica-AIS, The Netherlands) crash badly out of a winning position and her compatriot Anna van der Breggen take the Olympic title, we were looking forward to a hotly contested but perhaps less eventful time trial.

The weather at the start didn’t bode well, however, as pouring rain and windy conditions made for a nervous start. And, with Van Vleuten’s crash still fresh in people’s minds, the Grumari circuit’s steep and technical descents were taken with caution.

Luckily, the cobbled section featured in the road race that had caused some problems was left out of the circuit, as riders were allowed to use the strip of asphalt alongside the cobbles.

“I looked out the window and thought ‘oh my gosh.’ We don’t train really hard to wake up to pouring rain on the time trial bike, let alone on a technical course like this,” said Armstrong. “I had a choice at that moment to either take it and get super nervous or I could take it and say you know what, I’ve probably ridden my bike in the rain on the time trial bike more than any one out here. So I kind of tricked my mind and gave myself confidence because everyone else had to go with this.”

“The strong winds scared me and the descents were also difficult in this weather,” she said in a team statement, who given those factors and her tired legs from Sunday’s effort, was very happy with her second Olympic medal. A race turning moment: Ellen van Dijk slips into the gutter and loses precious seconds trying to get going again.

Despite the conditions, riders managed to maneuvre their stiff time trial bikes safely along the course but Ellen van Dijk (Boels-Dolmans, The Netherlands) did slip into the gutter in a moment of carelessness and lost precious seconds trying to get going again.

This would turn out to be a crucial moment in the race, as she was in a medal contending position when the mishap occurred and despite her best efforts, would have to settle for a fourth place finish, 22 seconds behind the winner.

“I have worked so long and so hard for this. But I never really believed I could win a medal here…until last week. Suddenly I thought, yes it is possible. I started dreaming of a medal this week, I hadn’t dared to dream of it before,” Van Dijk told the Dutch media in tears. “I can blame no one but myself and it’ll keep me up at night for a while.” After winning the road race on Sunday, Anna van der Breggen was hoping for a historic double.

Canadian Tara Whitten set the fastest time early on and she sat in the hotseat for quite some. Even when all riders had passed the first time check, only three women were quicker: Van der Breggen, Elisa Longo Borghini (Wiggle-High5, Italy) and Armstrong.

Armstrong, Longo Borghini and Van der Breggen remained in contention with one another positions at time split 2, but there was one other rider who set an even faster time. Olga Zabelinskaya, the Russian rider who originally wasn’t allowed to compete in Rio after testing positive for octopamine in 2014, came flying through the checkpoints.

Along with other Russian athletes, Zabelinskaya, two-time bronze medalist in 2012, had only been given the go ahead to compete at Rio last Friday and clearly was out here with something to prove.

Whitten remained in the hotseat until Longo Borghini came in 10 seconds ahead if her with Van Dijk on her heals. Armstrong came across the finish with a nose bleed and fell to the ground in exhaustion.

Van Dijk came in three seconds ahead of Longo Borghini, setting the fastest time at that point but she knew it wouldn’t be long as the fastest three had yet to finish.

Indeed, Zabelinskaya came in 16 seconds faster. And when Van der Breggen couldn’t get to Zabelinskaya’s time and world time trial champion Linda Villumsen (UnitedHealthcare, New Zealand) only set the 5th best time when she finished, it became apparent that only Armstrong could challenge Zabelinskaya’s time.

After the USA came tantalisingly close to a medal in Sunday’s road race, all hope was on the 42-year-old Idahoan. Her Olympic selection had been at the centre of much controversy and media frenzy these past two months, and everyone was wondering if she could do it. Could she come back from her second retirement and win her third straight gold?

And yes she could! Riding herself into the history books, Armstrong gave herself the best birthday present: another golden Olympic medal. Armstrong is the first cyclist to win three gold medals in the same discipline.