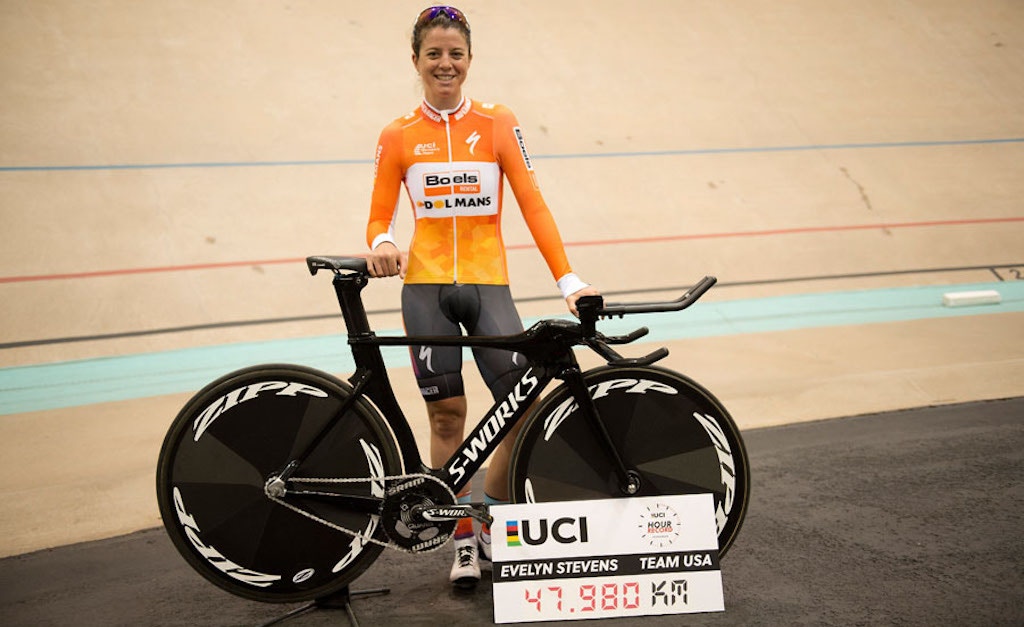 There were even times at the 7-Eleven Velodrome in Colorado Springs where it looked like Stevens may threaten the all-time distance record of 48.159 kilometres set by French cyclist Jeannie Longo in 1996 using the now banned ‘Superman’ position, however it proved a mark too far.

“For the first 45 minutes in I was just in the zone, saying ‘pedal, push, pedal, push,’ not thinking,” Stevens said. “With 15 minutes to go the plan was to try to squeeze, which I was able to do for a couple of laps. You don’t know your limit until you hit your limit. I think I found it today.”

The two-time national time trial champion and three-time team time trial world champion started off steadily, keeping close to the black line, posting consistent lap times and riding at a pace of 48 kilometres per hour at the halfway mark.

She kept up a steady pace and position through most of the ride but her line and consistency started to waver in the last ten minutes. The effort that was going into the attempt as the clock ticked down was then clear until the hour was up and Stevens calmly allowed her focussed face to break into a smile.

“I didn’t feel any acute pain, I felt just an overall fatigue, just trying to squeeze everything I physically had,” Stevens said. “I think a lot of the hour is staying present and mindful. That’s the hardest part for the first 45 minutes. Then the last 15 minutes was just trying to stay calm and just push everything I had out of my body.”

This was the fourth attempt on the women’s world hour record since a modernisation of the rules in 2014. The first to beat Leontien Van Moorsel’s 12-year-old mark of 46.065 kilometres was American law professor Molly Shaffer van Houweling who made it to 46.274 kilometres before the clock ran out. Last month, O’Donnell added more than 600 metres to Shaffer van Houweling’s mark, raising the bar to 46.882 kilometres.

“I think it’s terrific that a rider of the caliber of Evelyn Stevens who’s been racing professionally and wining time trials and team time trials for such a long time put this on her to-do list,” commented O’Donnell, who saw her own record broken after just five short weeks. “It gives more attention to the effort, science, commitment and talent required to break a world record and I’m really happy for her!”

Shaffer van Houweling and O’Donnell are both amateur athletes in their 40’s who took to the track specifically to prepare for their hour attempt, however Stevens is a 32-year-old pro who has trained with the US track team for the past four winters to benefit from the high-power work — no stranger to the velodrome.

Shaffer van Houweling’s, Longo’s and Stevens’ records were all set with the advantage of high altitude, while O’Donnell’s was set at a velodrome 25 metres above sea level. The Colorado Springs velodrome is at 1839 metres (6,035 feet) elevation. Evelyn Stevens, during the final 15 minutes of her record-setting ride.