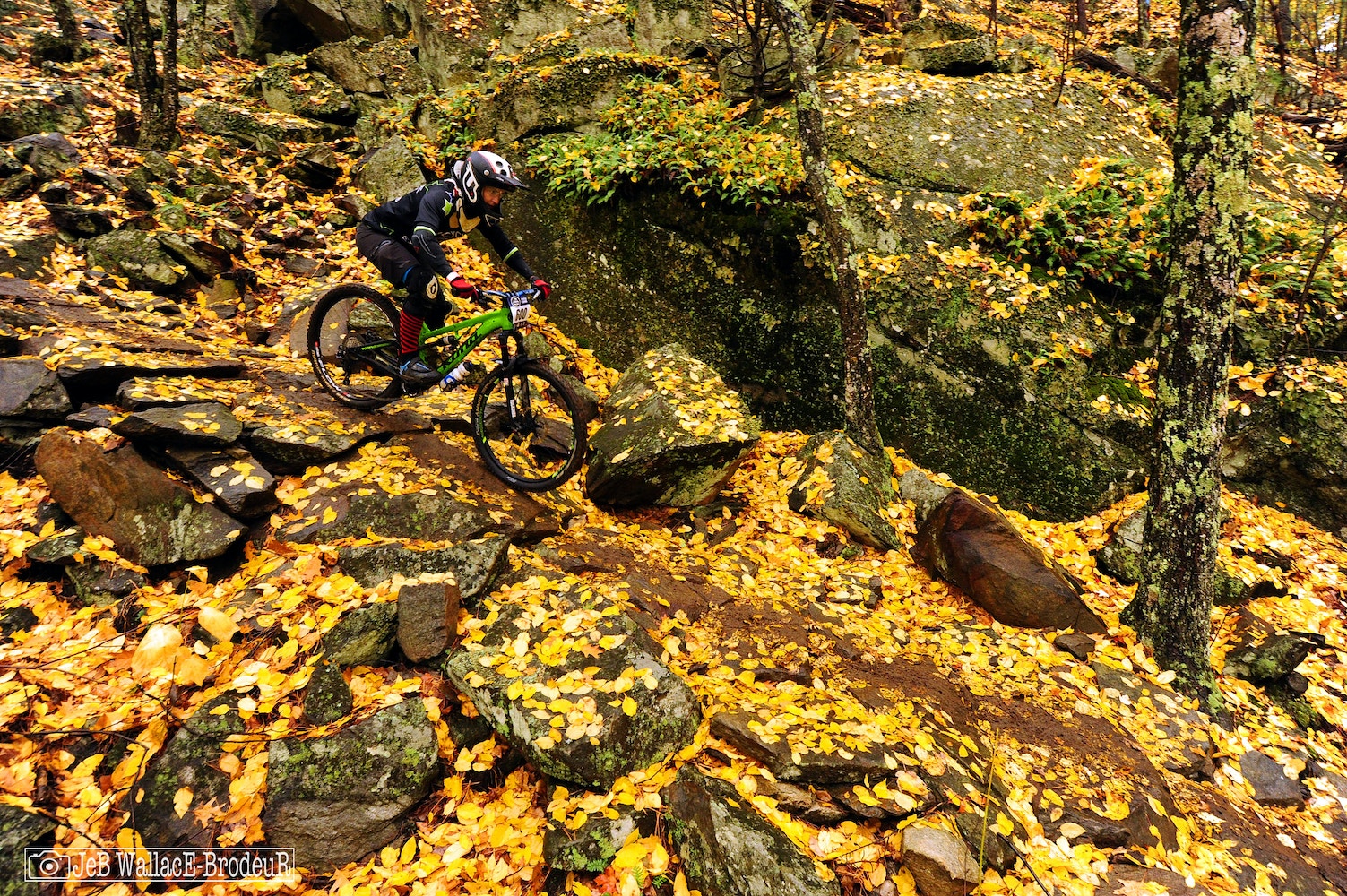 Against a tapestry of autumnal foliage, and with winter knocking on the door, the Triple Crown Eastern Enduro Series wrapped up this past weekend with a wild day of racing at Highland Mountain in New Hampshire. Nearly 150 racers battled the weather and the competition to claim podium spots for the third leg of the series and the overall Triple Crown title. Rain soaked the mountain on Saturday afternoon and temperatures hovered around 40 degrees with a stiff north wind on race morning, but riders were unfazed and ready to roll when start times were called. The first stage was the longest of the day and incorporated the rugged, rolling steeps of Faux Pine followed by the rambling Stump Line and the pedally 820. A long transfer, the first of three on the day, brought racers back to the top of the mountain. Stage Two started with a blast down the high-speed berms of Easy Rider before dropping into the slick loamy chutes of Hey Joe and a final pedal along the gently rising Doctor’s Orders. Returning to the summit once again for Stage Three, racers dove briefly down NE Style before detouring into the woods for a steep and scary plunge down a fresh-cut section that dumped riders onto Happy Hour and a sinuous cruise to the base. One more tiring climb up Freedom Trail took riders to the final stage, a mash up of Happy Hour, Shillelagh and Eastern Hemlock, with some spicy new sections thrown into the mix. Veteran speedster Dawn Bourque, riding for DRRT and Team Granite, completed the Triple Crown sweep with her third consecutive win for the pro women. This may have been the toughest of them all for Bourque with only four seconds separating the top three women. In second place was Devinci Factory Racing pro Rachel Pageau. The Canadian youngster, about three decades Bourque’s junior, appeared to have the race in hand after taking the first two stages, but lost her lead on Stage Four and ended up just two seconds off the winning time. In third place was Kona pro Becky Gardner, making her first East coast race appearance of the season. Gardner tied Bourque for the stage win on the final leg and finished a mere four seconds behind for the race. For the pro men, the event was a battle between a couple heavy hitters in the enduro world. After trading stage wins all day with his rival Antoine Caron, Rocky Mountain Urge BP pro Peter Ostroski absolutely hammered the final leg and earned a crazy-fast six-second margin and took the overall win by a scant four seconds. Canadian Antoine Caron won the first and third stages to finish in the runner-up spot. Riding for Pivot Cycles and On the Edge, Caron had a remarkable Triple Crown this year with a win and two seconds. Wrapping up a highly competitive series, the overall Triple Crown Enduro champions were crowned at Highland. For the pro women, it was Lauren Petersen in third, Rachel Pageau in second and Dawn Bourque taking the top spot. For the pro men, Isaac Allaire took home the third spot, Seamus Powell was runner up and Antoine Caron earned the top step.