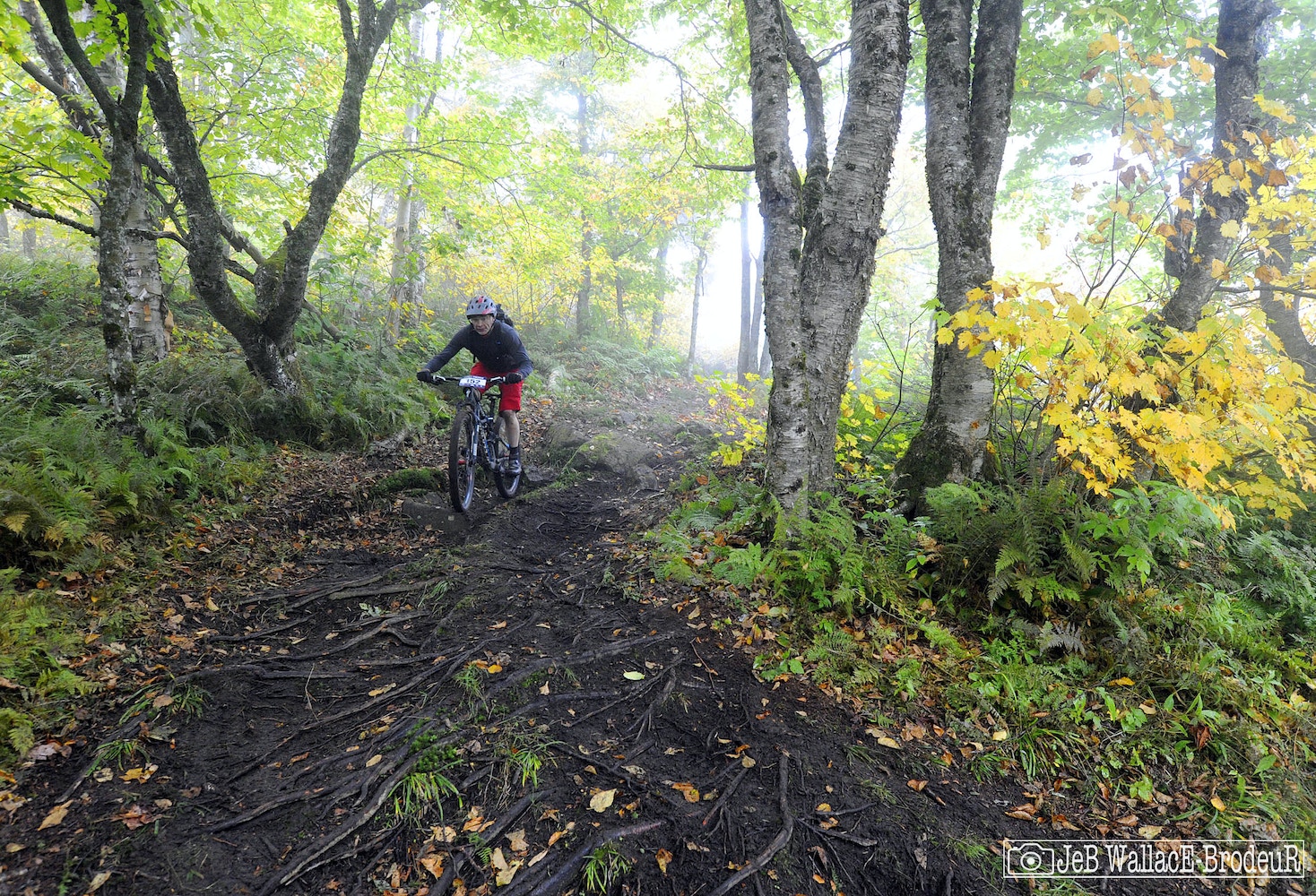 Round Two of the Eastern Triple Crown Enduro series came to Burke Mountain in Vermont’s Norrtheast Kingdom this past weekend. Quiet and rural East Burke, home to Burke Mountain ski resort, was once a virtual ghost town in the summers. With the growth of the Kingdom Trails mountain bike network, considered one of the finest in the country, the area has become a biking mecca and hosts tens of thousands of riders every summer.

Though much of the Kingdom Trails network lies on on the gentle inclines of nearby Darling Hill, the enduro was contested on the rugged flanks of Burke Mountain. The Sherburne Express Quad services the bike park on the lower mountain but much of the course lay on the upper mountain with some epic transfers making this the most physically demanding enduro of the year on the East coast. Stage One was a warmup romp through the bike park on Jester, Enchanted Forest and the dual slalom course. The sinuous line demanded precise corning skills and ample air awareness. Riders then climbed a steep transfer to the auto road for the long slog to the top of of the mountain. DH Trail ends about halfway down the mountain at which point riders pedaled a short transfer to the top of Stage Three. The pedally segment began with the slick and rough Dead Moose Abuse then mellowed out on the switchbacks of Dead Moose Alley and Blacksmith. Another tiring climb brought riders to the top of Stage Four, the final leg for the amateur classes. A low-angle rip down Camptown joined into the raucously fun rolls and berms of Roly Grail. The pros got a mixed-bag bonus stage which was a blessing because it was a top-to-bottom epic on Upper J-Bar and Black Forest, but also a curse as it entailed another monster climb to the top of the mountain. The women’s pro race saw a Triple Crown repeat winner as Dawn Bourque backed up her Mountain Creek victory with a dominant performance at Burke. The New Hampshire veteran racer won three stages but really put the hurt on the field on Stage Two with a more than 30-second margin and then topped her closest rival on Stage Five by nearly a minute. The men’s pro race was a tight one with Giant Factory Off Road Team member Seamus Powell gutting out a two-second victory. Powell won Stages One, Three and Four en route to his impressive win over a huge field of 40 pros. In second place was the winner of the first Triple Crown event at Mountain Creek, Antoine Caron, riding for Pivot Cycles. Caron won Stages Two and Five, the two big downhill stages, but couldn’t quite match Powell’s pace on the more pedally stages. In the third spot was Vermont ripper Isaac Allaire, riding for Transition, Troy Lee Designs and Chuck’s Bikes. Allaire took fourth at the first Triple Crown and remarkably has hit the podium in 14 of his last 16 downhill and enduro starts this season.