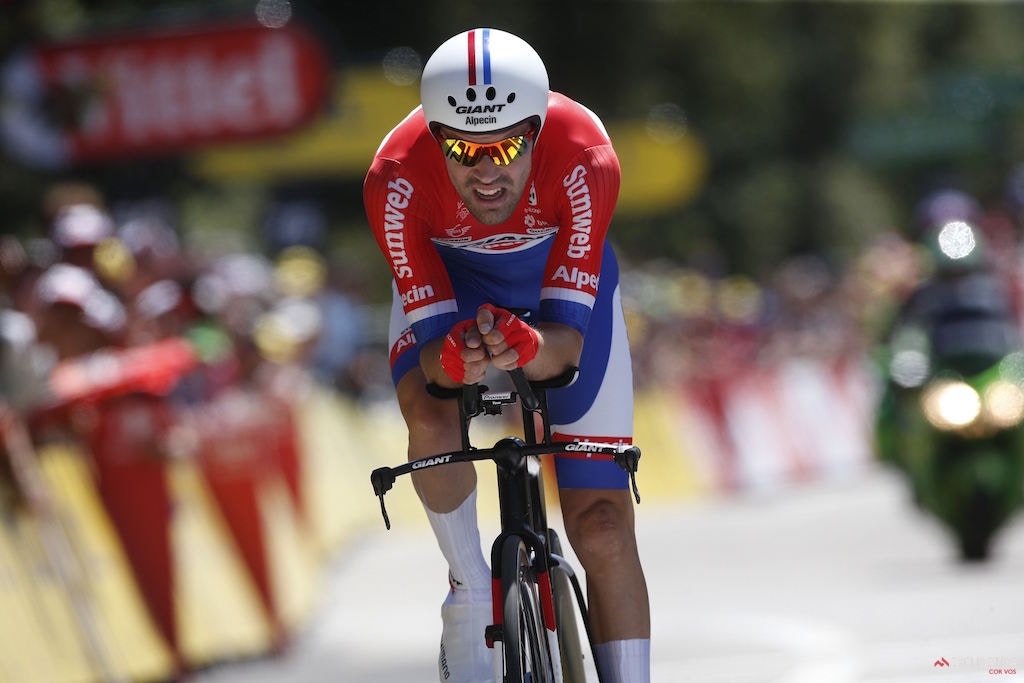 The Dutchman, winner of the opening individual time trial at the Giro d’Italia in May, averaged an impressive 44.78kph (27.8mph) over the rolling, windy course. Race leader Chris Froome (Team Sky) finished in second, 1:03 behind, with Nelson Oliveira (Movistar), an early leader, in third, 1:31 behind.

“This was my big goal before this Tour de France,” Dumoulin said after securing the stage victory. “I went a bit out of focus this morning, which is normal when you hear about these terrible things happening, just a few hundred kilometres away from here. Two hours before the start I thought ‘Ok, we’re racing anyway. I’m just going for it’ and I went for it and it was a very very good TT. But to win with more than a minute on Froome and anyone else is something I didn’t expect. It gives me a lot of confidence.”

After Thursday’s debacle on Mont Ventoux with the TV moto, Froome showed no lasting effects of the incident by putting considerable time into the riders battling him for the overall title. Froome’s closest GC competitor on the stage was Bauke Mollema (Trek-Segafredo) who finished 51 seconds behind the maillot jaune. The Dutchman, who was discouraged by the race jury’s decision to adjust the finishing times on Mont Ventoux, moved up to second overall and trails Froome by 1:45. The leader of the Best Young Rider classification, Adam Yates (Orica-BikeExchange), rode strongly to retain a spot on the virtual podium, as he sits third overall at 2:45.

Nairo Quintana (Movistar) remains fourth overall, but is 2:59 down on Froome. The Alps are looming on the horizon and the Colombian will now have to attack if he wants a shot at taking home his first Tour title.

“My body responded better in the final part,” Quintana said after the stage. “I really suffered at first. I’m three minutes down in the GC, that’s a little far. I hope the legs will continue to be good. There are still a lot of mountains. I will try to attack like I’ve always done. I hope I will have the legs to do it. We’re going to try everything we can.”

The biggest mover of the day was Richie Porte (BMC Racing) who cracked the top-10 in the general classification for the first time after losing considerable time on Stage 2 due to a puncture late in the stage. He sits eighth overall, but the gaps have begun to grow, as he is 4:27 behind his friend and former teammate.

The riders tackled the first individual time trial of the 2016 Tour Friday, a 37.5km (23.3mi) route from Bourg-Saint-Andéol to La Caverne du Pont-d’Arc. The route was not at all flat with 660m (2,165ft) of climbing, favoring a time trialist who could not only power on the flats, but climb as well. The solo effort began with a 7km drag out of town up the Cote de Bourg-Saint-Andéol. Thibaut Pinot (FDJ) abandoned the race in the morning before the start of the stage, citing bronchitis. He had been battling to win the King of the Mountains classification, after losing time early on, all hope of a high overall finish gone. Edward Theuns (Trek-Segafredo), an early starter crashed during his solo effort and abandoned the race. Julian Alaphilippe (Etixx-QuickStep) also crashed, but was able to finish the stage.

Rohan Dennis (BMC Racing), the Australian national time trial champion, blazed the course early on with a time of 51:56 at an average speed of 43.32km/h. He would ultimately end up in fourth on the stage.

“Overall I’m happy with the ride, it’s been a tough Tour so far,” Dennis said after his effort. “Considering it’s stage 13, it’s a different feeling time trialing with super fatigue, especially when the course is so hard, not just the climbing in general but the wind as well played a huge part. I think one major factor for anyone who’s gonna be going for today’s stage is what wheels they pick. Some of the smaller guys might not be picking a faster wheel and just because of their weight and not being able to hold the bike. You’ve got those crosswinds so maybe it might help us. As bigger guys, you could say… I’m hoping for my own sake that that’s the case but it’s definitely not an easy course today. It’s quite challenging.”

Dennis’ time in the hot seat was short lived with Oliveira, the national time trial champion of Portugal, bettering the Australian by 10 seconds for a time of 51:46.

“It’s a really hard TT,”Oliveira said after posting a new best time. “The wind makes it a little bit dangerous. With the new technologies, you can watch the watts, you know what you need to do. I just followed the watts. I knew I needed some energy for the last part. The last climb was decisive. I was also lucky to feel good towards the end.”

Jerome Coppel (IAM), bronze medlaist at the 2015 world time trial championship, flew through the course, but came up just short, finishing three seconds behind Oliveira. He time would be good enough for fifth on the stage when all the riders had finished.

Notable riders to come up short on setting a new best time were the Swiss and German national time trial champions, Fabian Cancellara (Trek-Segafredo) and Tony Martin (Extixx-QuickStep), with seven world time trial titles between them. Cancellara finished with a time of 53:30 and Martin finished in 52:20.

With the opening 7km of the TT uphill, the riders had to carefully pace themselves to not risk being too fatigued later in the race to contest for a good time.

Dumoulin, the Dutch national time trial champion, got the timing and pacing perfectly out on course, setting a new best time at each checkpoint. The Giant-Alpecin rider crossed the line utterly exhausted, his face a picture of pain. He finished in a time 50:15, topping previous leader Oliveira by 1:31.

“First of all, I want to say that something really bad happened last night,” Dumounlin said while he waited in the hot seat to see if he would end up winning the stage. “It made me very sad when I woke up this morning. I wondered if the Tour would continue or not. It’s horrific but it’s a good decision to keep racing. We cannot let the terrorists decide how we should be living. Two hours before my starting time, I focused on my time trialing again as there was nothing else I could do but ride well and I did. I’m satisfied with my time. Froome can beat me but I’ve done a very good time trial personally.”

Porte kicked-off the beginning of the serious contenders for the overall title, when he was the eleventh rider from the end to start his solo effort. The Tasmanian powered through the opening climb and rode through the first checkpoint only 10 seconds down on Dumoulin’s time. The former Australian national time trial champion faded towards the end of the course and finished with a time of 53:23. Porte conceded over three minutes to Dumoulin after only trailing him by 10 seconds after the first check.

Froome went through the first time check, at the 7km point, 17 seconds behind the time of Dumoulin, but faster than all of his other rivals for the general classification, other than Porte.

The maillot jaune continued to power all along the course continuing to put time into his rivals, though continually losing time to Dumoulin. Quintana finished the stage in the same time of Porte, 3:08 back of the winner, holding on to his fourth place in the general classification.

Mollema stormed the course and proved to be the second-best GC rider on the day. The Trek-Segafredo rider finished the stage sixth, demonstrating he has the ability to finish on the Tour podium — a result that would surely put rumors of Alberto Contador signing with Trek next year into a new context.

Froome powered across the line, sending a statement to all GC contenders that he will be hard to dethrone. The British rider still finished over a minute behind the stage winner, but he had beaten all GC rivals.

While Dumoulin had an impressive ride to win the stage, and Froome extended his lead in the general classification, the surprise of the day belonged to Yates. The young British rider on the Australian team may not have the time trial pedigree of other GC contenders for that matter, but he was able to pace himself throughout the tough course and keep a top-three position as the race heads towards the Alps.

“It was a dangerous stage, but I felt good uphill,” Yates said after the stage. “I suffered more on the flat because of the wind. Time trial isn’t my forté, so I expected to lose more time with regards to the favourites. It didn’t go badly. I’ve ridden 50 minutes flat out. I’m still on the podium, that’s where I wanted to be after the TT. Every day we keep fighting, then whatever happens happens. It’s hard to see, it’s a week to go, if you have a bad day, you lose minutes, so I don’t want to stress.”

Saturday marks the fourteenth stage of the 2016 Tour de France and the riders will travel 208.5km(129.5mi) from Montélimar to Villars-les-Dombes Parc des Oiseaux. With no difficult climbs on the route and a flat run-in to the finish, the sprinters of the peloton should have another shot at victory.