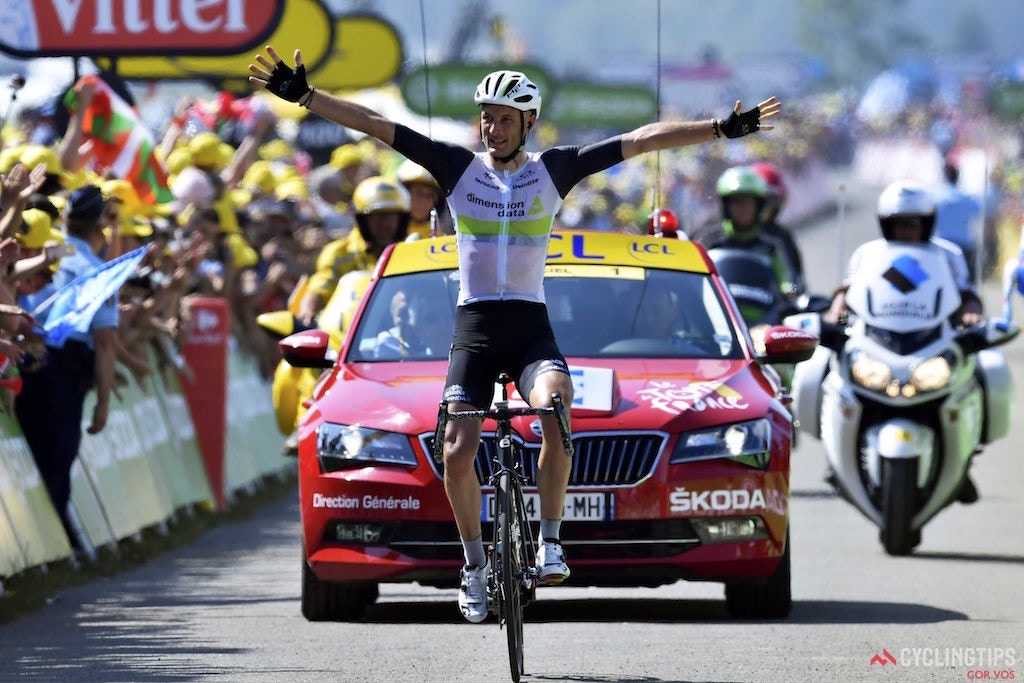 Steve Cummings (Dimension Data) took a stellar stage win at the 2016 Tour de France on the first of three successive days in the Pyrenees. The rider from Great Britain made the early breakaway and escaped solo from his companions before the category 1 Col d’Aspin.

Cummings powered over the final climb and sped down the seven-kilometre descent to the finish to take Dimension Data’s fourth stage victory in only seven days of racing at this year’s Tour.

“Of all my victories, I think it’s the best one,” Cummings said after the stage. “The Tour is the Tour, it’s special. I didn’t just want to win a stage this year, I needed to win a stage this year. I had a different condition from last year as I started the Tour riding for Mark [Cavendish] who is such a winner and an inspiration. It’s brilliant, it’s fantastic.”

The maillot jaune of Greg Van Avermaet (BMC Racing) made the day’s 29-rider breakaway and managed to hold on for fifth place on the stage and extend his lead in the overall classification.

Attacks from the heavy-hitters were non-existent up the Col d’Aspin, though Julian Alaphilippe (Etixx-QuickStep) did try a move, but was quickly brought back into the fold.

Van Avermaet now leads Alaphilippe, who retained his lead in the Best Young Rider classification and moved up to second overall, by 6:36. Chris Froome and a host of other contenders are 6:42 behind.

Alberto Contador (Tinkoff) managed to finish with the other climbers after struggling over the climbs on stage 5, but the biggest loser on the day was Thibaut Pinot (FDJ) who was dropped on the Col d’Aspin despite his teammates putting him in perfect position at the bottom. The Frenchman lost 2:46 to the other GC favorites.

For the first time in history there were no abandons through the first six stages and all 198 riders of the 2016 Tour de France took the start in L’Isle-Jourdain for stage 7. The 162.km (101mi) ride to the finish in Lac de Payolle included 2,230m (7,316ft) of climbing with the category 1 Col d’Aspin coming before a fast descent to the finish in the valley. Attacks flew left and right from the gun with most of the riders and teams looking to be in the breakaway. The green jersey of Mark Cavendish (Dimension Data) and the rainbow bands of world champion Peter Sagan (Tinkoff) were seen going in early moves.

A breakaway had had not established after an hour racing, with the riders covering 49.4 kilometres.

When a breakaway did finally slip the grasp of the peloton, 29 riders had made the lead group including the maillot jaune of Van Avermaet and former Tour champion Nibali.

Tinkoff, Movistar, and Katusha were the only teams not represented in the breakaway.

After the category 4 climb of the Cote de Capvern, and with less than 45 kilometres to the finish, three riders attacked the breakaway. Duchesne, Breschel, and Navarro gained an advantage over their fellow breakaway companions with the peloton nearly four minutes behind led by Team Sky.

Cummings soon bridged to the attackers, making a four-rider group in the lead, with the distance to the other breakaway riders growing by the metre.

“I wasn’t confident in that group with [Vincenzo] Nibali and [Daniel] Navarro,” Cummings said. “The idea was that Navarro will cook himself before the climb, so I put pressure on Astana to chase behind. I felt if I can get in front with a smaller number of riders, I’d have more chances of winning. I cooked myself actually. I think I was riding on the flat quite a lot. Then a 5 to 6% climb like Col d’Aspin is good for my characteristics, so I just carried on and I won.”

With 27 kilometres to go, Cummings attacked and set-off alone. He began the feared Category 1 climb of the Col d’Aspin eight kilometres later with a 27-second advantage over a 11-rider chasing group of his former breakaway companion,s and more than five minutes over the peloton. When the peloton hit the bottom of the climb, Warren Barguil (Giant-Alepcin) attacked out of the peloton, which was being led by FDJ, the team of Pinot.

Nibali continued to accelerate on the lower slopes of the climb and split the chase group with only Impey and Navarro able to follow the rider from Sicily. Van Avermaet was alone setting his own tempo.

Domenico Pozzovivio (Ag2r-La Mondiale) attacked out the peloton less than five kilometres from the summit, but at the back Pinot was losing ground. After his teammates led him onto the Col d’Aspin in perfect position, the Frenchman was losing time in the overall classification.

A kilometre from the summit of the first Category 1 climb of this year’s Tour, Cummings held an advantage of over a minute to the chasers as Navarro had attacked in pursuit of the leaders. Impey was slowly bridging to Navarro with Nibali suffering from doing the bulk of the pace-making on the climb.

Cummings crested the Col d’Aspin with a 1:02 advantage over Impey and Navarro. Meanwhile, Alaphilippe had attacked out of the peloton.

Van Avermaet crossed the top of the climb in fifth position, 2:45 behind Cummings and more than a minute ahead of the peloton.

The peloton, albeit greatly reduced, went over the climb 3:20 behind Cummings with Alaphilippe, Pozzovivo, and Barguil all having been brought back into the fold. Cummings flew down the descent and had plenty of time to celebrate the 63rd Tour stage victory for a British cyclist. The Dimension Data rider was greatly upset at missing out on British Cycling’s selection for the Olympic Games before the Tour, and made a statement with his stage win.

Impey out-sprinted Navarro for second on the stage 1:05 behind Cummings. Nibali finished fourth at 2:14.

“Cummings has done well anticipating our return,” Nibali said. “He told me after the race that he did it because he was scared of me. It wasn’t easy to read this race. I made the right breakaway and I did quite well I think. I’m looking for my best shape and I hope to have fun during this Tour. I haven’t stopped smiling even though I lost some time the other day. I know I can have a good Tour de France even after having won the Giro d’Italia. The first goal is to have a good final GC with Fabio Aru. He’s in a great shape.”

Van Avermaet extended his advantage in the GC by finishing the stage in fifth place 3:04 behind Cummings.

“It was good that we had an easy day yesterday. It was a big effort when I had to close the gap by myself to reach the front group when our breakaway split,” Van Avermaet said. “I’m happy to keep the yellow jersey and gain some extra time. I’ve never thought I could win a second stage today. With Nibali, Navarro and Cummings in the front group, it was too hard to beat them. In the climb, I rode at my rhythm. I didn’t want to go beyond my limit when Nibali attacked. I just wanted to defend the yellow jersey.”

A bizarre incident occurred as the peloton raced to the finish, as the 1km-to-go banner collapsed onto the road. The select peloton ground to halt and riders were seen ducking and diving under the banner. The banner actually fell on Adam Yates (Orica-BikeExchange) who was ahead of the peloton at the time and caused him to crash, crossing the line with a bloody chin. The peloton was given an official time of 4:29 behind the stage winner, recorded at 3km to go.

“I’m disappointed. Thats not much you can do. I had no time to react,” Yates said. “It’s a good job it was just me on my own. It could have been a lot worse with the peloton sprinting at 70 kph. It is what it is. Nothing can be done about it. I can’t tell you what happened. The barrier came down. I did attack at the top of the climb. I tried to make a gap to take the white jersey.”

Pinot suffered on the first day in Pyrenees finishing the stage 7:15 behind Cummings and 2:46 behind all of the GC contenders.

“I simply didn’t have the legs. There’s no excuse to look for,” Pinot said. “It’s three times that I arrive in the Pyrenees and that I lose ground. That’s it. I find myself with the same sensations as in the Dauphine. I’m not 100 percent and in the Tour, you have to be 100 percent. Of course, it’s a waste. It’s a season that almost goes to crumbs. The Tour is the highlight of the season and from the first mountain stage, the objective is over. It is not a matter of preparation. We looked to reach our peak for the Ventoux, but we’re not machines. To program a peak it’s more easily said than done. We’ll see tomorrow. If it’s like today, there won’t be any surprise. After two kilometers I realized I was not at my best.”

Mark Cavendish (Dimension Data) still leads the points competition, and Thomas De Gendt will wear the polka-dot jersey as leader of the King of the Mountains classification again on stage 8.

On Saturday the peloton of the 2016 Tour de France rides 184km (114.3mi) from Pau to Bagnères-de-Luchon. Three tough climbs feature on the stage with the hors categorie Col du Tourmalet and the category one climbs of the Col de Val Louron-Azet and Col de Peyresourde. The stage is not for the faint of heart with 4,350m (14,271ft) of climbing, but again the stage ends in the valley after the harrowing high-speed descent of the Pyresourde.