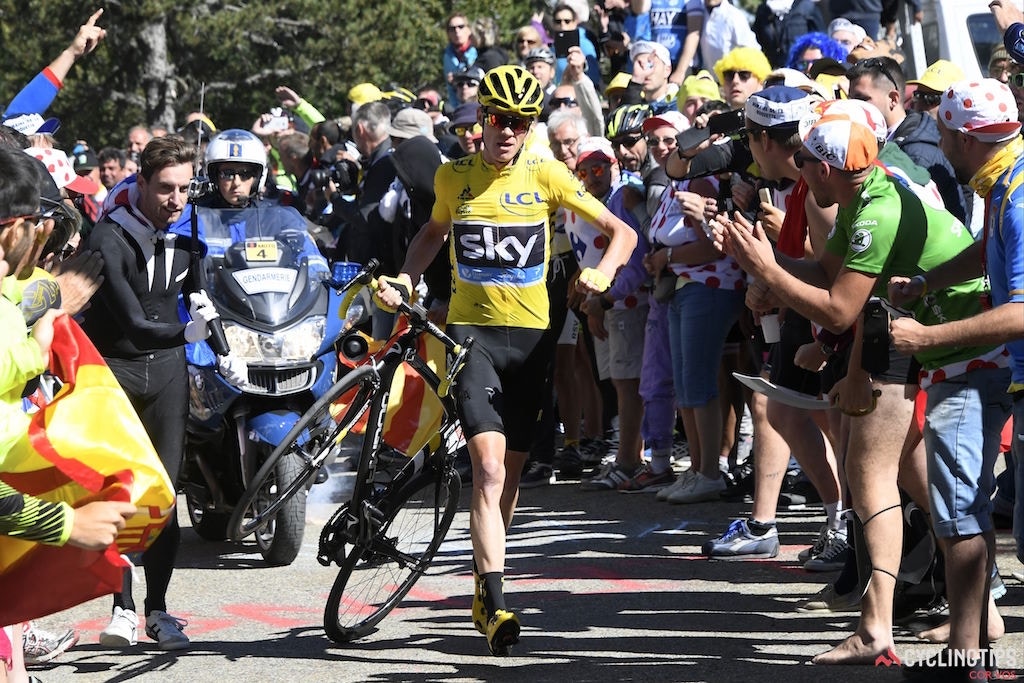 The final kilometers of the Tour de France devolved into chaos and farce Thursday on the lower slopes of Mont Ventoux after a race moto caused a pileup among GC contenders, resulting in a broken bike for race leader Chris Froome, who then took the unconventional (and against the rules) decision to run up the road until he could get a replacement.

The incident was caused by a thick crowd, no doubt larger than normal due to the shortening of the stage from the summit on Mont Ventoux to 6km lower down, to Chalet Reynard. While there are usually barriers to separate the crowd from the riders on the final kilometer of a summit finish, at Chalet Reynard, this was not the case.

A few minutes behind stage winner Thomas De Gendt (Lotto-Soudal), Froome, Richie Porte (BMC Racing), and Bauke Mollema (Trek-Segafredo) held a gap over other GC contenders until a race moto came to a standstill at 1200 meters to go. All three riders piled into the moto, and each other, with Froome’s bike broken and rendered unrideable. “The crowd was just all on the road and the motorbike just stopped right in front of us and we had nowhere to go,” Porte said. “The next minute, we’re straight over the top of the motorbike. It was just a mess.”

With a moto down, fans swarming, and other GC contenders coming through, the option of taking a spare bike was not available, so the maillot jaune of the Tour de France, wearing bib no. 1, took the unusual decision to start running up the road — a sight many cycling fans may never forget.

Eventually, Froome took a bike from Mavic neutral support, but he had cleat/pedal issues and was unable to build momentum. Finally he took a team bike with 400 meters to go, crossing the line several minutes behind GC contenders such as Adam Yates (Orica-BikeExchange) and Nairo Quintana (Movistar).

After a protracted 30-minute meeting between the UCI race jury, Tour organizers, and team directors, Froome was allowed to keep his race lead, 47 seconds ahead of Yates and 56 seconds ahead of Mollema.

“Mont Ventoux is full of surprises,” Froome said after the delayed maillot jaune presentation. “I think it was at 1.2km to go, the motor bike in front of us slammed on the brakes. The road was blocked, and the three of us — Mollema, Ritchie, and myself — piled over the back of it. Then there was another moto in the back in back of me, which broke my frame, and I was left running. I didn’t have a spare bike, and I knew the team cars were stuck behind other riders, so I was left to get up the climb as best I could.”

“I’m just glad to get through the stage,” Froome added. “I’m glad the race commissaires took the decision they did, in the interest of the race, and considering what’s happened over the past few days, so I want to say thank you to them, and to the organizers of the Tour de France.”

It was the second instance of Froome having an issue with fans atop a mountain at this Tour; on Stage 8, near the top of the Peyresourde, he was fined 200 Swiss francs for punching a spectator who he said came close to getting getting a flag stuck in his front wheel. Last year, Froome said he was spat upon, and had urine thrown on him, by roadside fans.

Porte, who also went down with Froome on Ventoux, shared his view of the situation: “We had the gap there on Quintana and everything was going you know absolutely perfectly and then the next thing the motorbike just stopped right in the middle of the road in front of me,” he said. “I had nowhere to go and straight over the top of it. I’m a little bit banged up. I just can’t stand that the motorbike and the crowd ruin the race like that.”