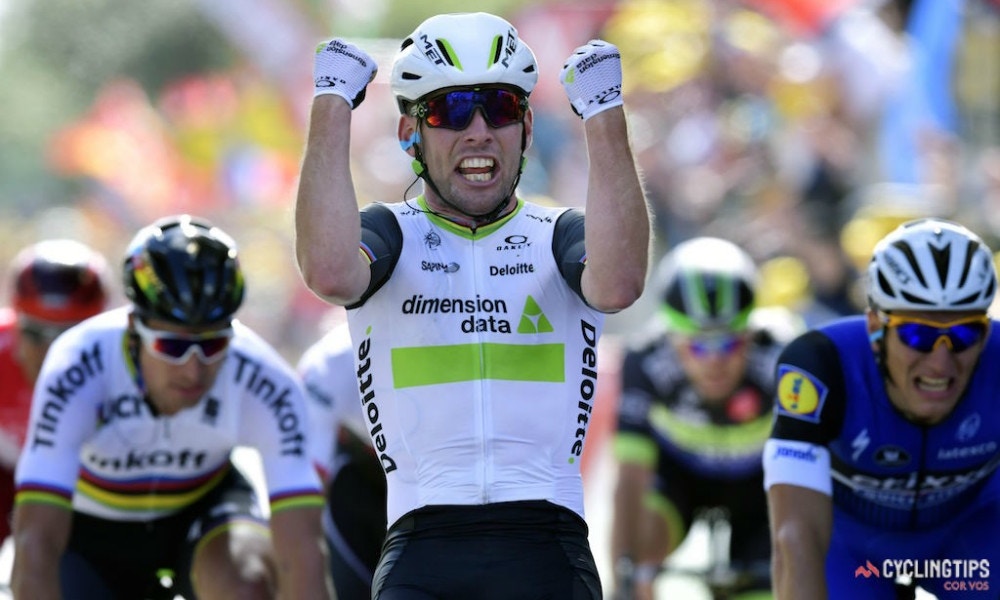 For the first time in his decorated Tour de France career — a career that has an astonishing 27 stage victories — Mark Cavendish is wearing the maillot jaune of race leader.

In doing so, the rider from the Isle of Man demonstrated that the questions about him balancing his Olympic track ambitions with his road-racing career have been without substance.

“It was a big goal for Dimension Data to win a stage at the Tour de France,” Cavendish said. “To add the yellow jersey is a reward for our sponsors and for the Qhubeka charity. I did it for my team, for the ‘kids on bicycle’ campaign. I can’t believe it. Regardless of who was there, the Tour de France is the Tour de France. To win a stage is incredible. I’m very emotional for it. It’s gonna be a special day tomorrow to ride a stage in yellow. There was no better place to achieve this than Utah Beach where soldiers died for us.”

A crash inside the final kilometre caught a few of the sprinters out, but most of the big names made it through safely. After Etixx-QuickStep spent most of the day on the front of the peloton chasing the day’s breakaway, Kittel was unable to finish off the job. He finished second to Cavendish, with world champion Sagan in third, and newly crowned German national road champion Andre Greipel (Lotto-Soudal) in fourth.

Disaster struck Contador as the riders navigated a traffic circle midway through the stage. With the peloton in echelon formation due to crosswinds it was chaotic in the bunch and exiting the circle Contador appeared to tangle with American Brent Bookwalter (BMC Racing) taking both men down. Contador was upright immediately, but his right shoulder, hip, and knee were marred with road rash. The two-time Tour champ would return to the peloton, but his 2016 Tour was not off to a good start.

How It Played Out:

The 103rd edition of the Tour de France began in grand fashion in the shadow of the famous landmark, and UNESCO World Heritage Site, Mont-Saint-Michel. Despite a cloudy morning, the sun came out and shone brightly down on the Tour. As the peloton lined up to start, the French national anthem played and the nation’s Air Force flew overhead with the colors of the country’s flag trailing behind.

The opening stage paid tribute to WWII and D-Day, beginning at Mont-Saint-Michel and finishing at Utah Beach, the site of the D-Day invasion took. The 188km (116.8mi) route was pancake flat, but included extended sections along the coast, creating a nervous start among the peloton with crosswinds and echelons on the minds of riders.

Leigh Howard (IAM Cycling) attacked the moment the 0km mark had passed, and hewas soon joined by the Bora-Argon 18 duo of Jan Barta and Paul Voss.

Two category four King of the Mountain climbs in the first 40km of the stage created a bit of excitement. Approaching the first climb, Barta and Voss began attacking Howard with Voss able to get away to take the single point available. Voss managed to continue to lead solo and kept a gap to the second KOM point to guarantee himself a trip to the podium at the end of the day.

The breakaway finally solidified after the second KOM climb and the five riders set about rotating for a long day out front, the 2016 Tour’s first breakaway. Though Howes and Delaplace had spent a significant amount of time chasing the three leaders, they showed no lack of energy in the breakaway.

Lotto-Soudal and Etixx-QuickStep allowed the breakaway to open an advantage of just over four minutes before they came to the front of the peloton and began the chase, protecting the ambitions of their respective sprinters, Greipel and Kittel.

After the feed zone with 85km left to the finish, the racing got quite interesting. As the peloton was buffeted by a strong crosswind from the lefthand side, Cannondale-Drapac came to the fore, and the race was on with riders scrambling everywhere trying not to miss the inevitable spilt.

Just 10km later Contador hit the deck and sent shockwaves through the peloton. The race was full gas at the moment, and it appeared it might be impossible for “El Pistolero” to avoid losing time, but he was given a reprieve by Fabian Cancellara (Trek-Segafredo), the peloton’s elder statesman, who came to the front of the peloton and slowed the bunch while Tinkoff brought its bloodied leader back.

After the Spaniard returned, the race was back on with the breakaway hovering around a minute in front with 70km to go.

“It’s not the best way to start,” Contador said. “I’m bruised all down along my right side from my ankle up but at least I don’t have to go home. Hopefully I can get through the coming days and recover before the mountains. There are some positions where my shoulder gives me some doubts but I want to be optimistic and recover. I was well placed [at the time of the crash]. I came into the corner, there was a traffic island and my front wheel hit it and then I fell back on the curb.”

The local hero, Delaplace, attacked his breakaway companions with 57km to the finish, and only Howes was able to follow. Lotto-Soudal and Etixx-QuickStep continued to lead the peloton, which trailed the breakaway by less than 30 seconds.

The duo’s lead never garnered more than half a minute and the peloton left the inevitable catch quite late, reeling in Howes and Delaplace with 5km remaining.

The blue train of Etixx-QuickStep controlled the peloton for the final couple of kilometres, but the team was swarmed heading into the final kilometre, as Katusha and Dimension Data came to the fore.

A crash inside the final 500 metres briefly disrupted the run-in to the line, as Katusha’s Michael Morkov, sitting in the first 10 positions of the peloton, clipped the barriers and crashed heavily. Irish sprinter Sam Bennett (Bora-Argon 18) was also brought down, and appeared to be injured.

The rainbow bands of Sagan opened the sprint, but the “Manx Missile” flew past, earning the victory and the first yellow jersey of the 2016 Tour. Cavendish has now worn the leader’s jersey in all three grand tours, only the 19th rider to accomplish this.

“I’m so over the moon,” Cavendish said of wearing the yellow jersey — an opportunity he’s missed the past few Tours that opened with a field-sprint stage. “Third time is lucky. In Corsica [in 2013] there was a crash, in Harrogate [in 2014] I was the crash. The Tour de France means everything to me, I’ve built my career on it, and I’ve never had the honor of wearing the yellow jersey. This race means everything to me.”

The win marks the 27th career Tour de France stage win for Cavendish and the first time he has beaten Kittel is a head-to-head sprint battle at the Tour.

Cavendish’s stint in the maillot jaune might be short lived, with a punchy finale on tap for stage 2. The 183km route from Saint-Lô to Cherbourg-en-Cotentin finishes with a tough short 2km climb to the finish. The finale appears to suit the likes of Sagan — along with Michael Matthews (Orica-BikeExchange) and Edvald Boasson Hagen (Dimension Data) — and the world champion is clearly on form after finishing third on stage 1.

Unfortunately Michael Matthews suffered a heavy crash in the finale. He has escaped without injury and will look to tomorrow for a stage victory.

Sport director Matt White praised the efforts of the team on a nervy opening stage.

“We thought that today was going to be fairly nervous and stressful in the bunch,” explained White. “So our main objective was to stay up near the front and out of trouble. A lot of the nerves were nullified due to the windy conditions and we were able to achieve our aim.”

“The guys rode really well today and we held our positions nicely. Michael (Matthews) got caught up in the crash just before the sprint, which was unfortunate, but thankfully he is ok.

“There are no easy days at the Tour de France but tomorrow is a stage that suits us with the finish being slightly uphill after a lumpy and quite technical parcours.”