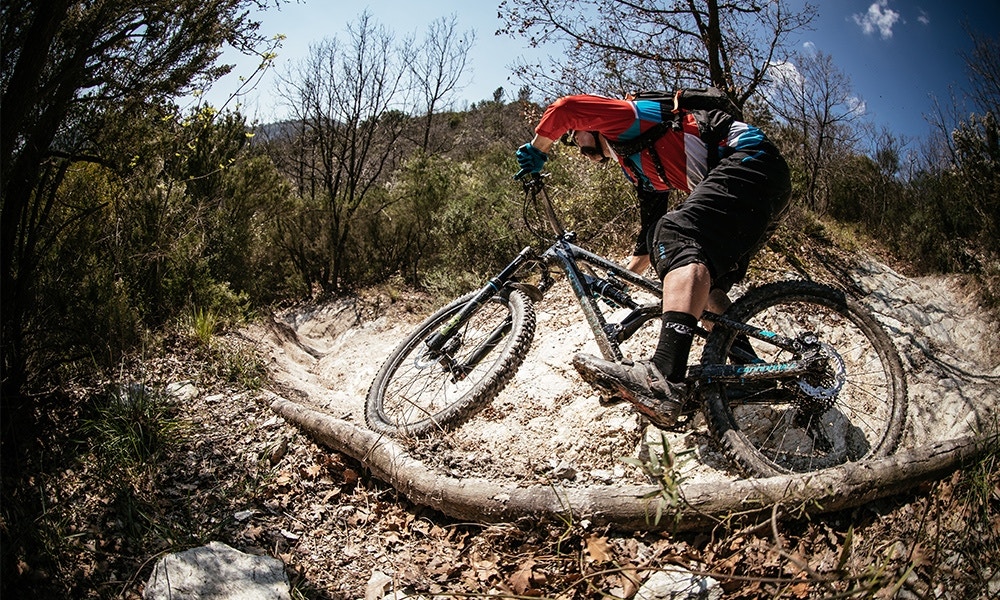 Today Cannondale announced the complete overhaul of its all-mountain and enduro bike platforms, the Trigger and Jekyll. The Jekyll is the American brand’s new Enduro race weapon, while the Trigger is effectively a shorter-travel, less aggro version which shares many of the same features and is built for hardcore trail and all-mountain riding. Here are ten things to know about the new Trigger and Jekyll. While these two platforms are new from the ground-up, perhaps the biggest change is seen in the new rear suspension design. Both the Jekyll and Trigger get a vastly different rear shock location with suspension kinematics nothing like the old. The Gemini name returns to Cannondale, but this time, it’s in the form of a rear shock that was designed in collaboration with FOX suspension. Replacing the somewhat polarizing Dyad rear shock of previous models, this new rear shock is much closer to a regular rear shock. Which means unlike the old bikes the new Jekyll and Trigger can be used with just about any brand or model shock on the market.

The new Gemini shock features two modes, Flow and Hustle, which can be switched between with the handlebar mounted remote. In Flow Mode, the shock offers full travel and is basically a regular FOX Float. Flick the switch into Hustle mode and the shock reduces its air volume, therefore stiffening the (air) spring and offering less rear wheel travel. It’s a clever way of doing things as it means all the dampening and external adjustments of the shock remain unchanged between settings, things just get snappier when you need it (such as when riding smoother trails).

In a world full of wheel size debate, Cannondale has picked a side. Both the Trigger and Jekyll will only be available in 27.5in wheels to offer an agile ride with the longer suspension travel. The Trigger comes supplied with 2.3in width tires, while the Jekyll gets 2.5in front tires and 2.4in at back.

Given Cannondale is no stranger to 29er wheels, we wouldn’t be surprised if a larger wheel option were to appear in future.

No Lefty in sight

Cannonade mountain bikes and Lefty forks have long been one and the same. The one-legged fork design is Cannonade’s own and continues to be strongly featured on the brand’s cross country and trail platforms, however, it’s no longer seen on the Jekyll or Trigger platforms.

The exact level of these forks will vary based on the bike’s price point, with the top-end models featuring Factory-level forks with Kashima stanchion coating.

Looking to the geometry charts and both bikes receive some rather aggressive numbers. The Enduro-Focused Jekyll is now slacked out to 65-degrees at the head angle, with the Trigger sitting at 66-degrees. The Jekyll and Trigger both have steep seat tube angles of 75 and 74.5-degrees respectively. Long top tubes and short stems is commonplace on the modern mountain bike, and neither the Jekyll nor Trigger shy away from this trend. Both platforms feature generous front center lengths combined with noticeably stubby stems and wide handlebars. The Jekyll comes stock with a 35mm length stem, while the Trigger is not much longer at just 45mm.

Continuing Cannondale’s push of it’s ‘AI’ (Asymmetric Integration) technology, both platforms now feature Boost rear wheels which use a proprietary 3mm offset to the dishing of the wheel. From a compatibility point of view, it’s not as bad as it sounds. Any Boost-compatible rear wheel can be used once the rim is re-dished appropriately – this is done by loosening the spokes of one side and tightening the others.

Cannondale have strong reason for this AI technology first seen on its cross country bikes, with the offset rear wheel allowing for an impressively short rear end. In the case of the Jekyll and Trigger, rear chainstay length is just 420mm. Yep, just 420mm. Not a typo.

Carbon shock link for all All new Jekyll and Trigger models feature a full carbon shock link that’s said to be both lighter and stiffer than what was achievable with aluminium. This link also plays host to the new ‘LockR’ pivot axles that are said to further help in frame stiffness.

Frame wise, the Jekyll is available in both carbon and alloy variants. The Jekyll 1, 2 and 3 all feature a carbon front end using Cannondale’s impact-resistant ‘Ballistic’ carbon technology. The Jekyll 4 uses an aluminium front end. The top end Jekyll 1 gets a matching carbon rear end, while all other models share that same carbon shock link and aluminium rear end.

There’s no alloy version of the Trigger available. Instead, the top of the range Trigger 1 features a full carbon frame, while the rest offer a carbon front end, carbon shock link and alloy rear end.

A carbon downtube protector is provided with all models to ward off those problematic rocks too.

Space for a water bottle Looking at the new rear suspension layout, many will be left wondering where the bottle goes. Cannondale haven’t forgotten that people need to drink, and a 700ml bidon can be fitted in an upright position at the bottom of the seat tube. A side-access bottle cage is likely needed, but that’s a common requirement on many modern mountain bikes. Dropper post, rear shock control, gears and brakes; internal cable ports exist for them all. Both the Jekyll and Trigger are also Di2 ready in case you ever decide your bike needs Bluetooth. Worth noting though, both the Trigger and Jekyll don’t appear to offer front derailleur compatibility.

You can read more about these two new platforms at Cannondale.com. Photos provided by Cannondale.*