The New Potenza Groupset from Campagnolo 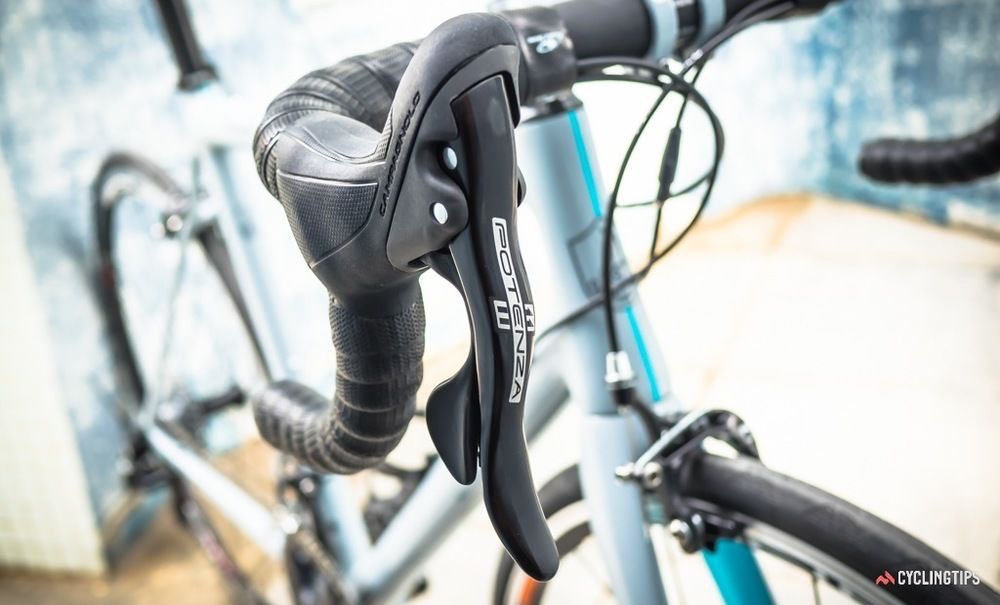 Campagnolo recently hosted a press camp in Gran Canaria and the headline act was “Potenza”, a new mid-range groupset that will replace Athena at the end of the year. The all aluminium groupset features some trickle-down technology from Campagnolo’s racing groupsets and has been designed to compete directly with Shimano’s Ultegra groupset.

Potenza is an Italian noun for power, intensity and strength, and Campagnolo was already drawing heavily from these associations when presenting the new groupset at the press camp. As a flurry of horses, boxers, and drift-racing cars filled the screen, Joshua Riddle, Campagnolo’s press manager, introduced each part of the groupset.

As noted above, Potenza will replace Athena as Campagnolo’s premium aluminium groupset at the end of the year. And like Athena, it will be offered in two versions (black and silver) with a price (€850-900) to compete with Ultegra, albeit with the small premium that typifies Campagnolo’s pricing policy.

From the outset, Riddle emphasised that Potenza was a newly designed groupset. So while the design of some of the components retained familiar elements, the design team had the freedom of working with a blank canvas for each part. Thus, it was a good opportunity to introduce some of the technology that was developed for the company’s recent overhaul of its racing groupsets, such as the new four-arm crank design, rear derailleur geometry and major refinements to the front derailleur and chainrings.

The other major refinement is the introduction of an 11-32T cassette to Campagnolo’s catalogue. It’s a move clearly designed to compete with Shimano and SRAM and it should broaden the appeal of the new groupset.

Campagnolo’s ambitions for Potenza are much greater than simply creating an aftermarket alternative to Ultegra. The company is hoping that bike manufacturers can be tempted to specify Potenza as original equipment for their 2017 bikes. Campagnolo created an all-alloy version of its new four-bolt crankset for the Potenza groupset.

An important part of this strategy is the cost-effectiveness of production. To this end, Potenza will be produced in Campagnolo’s Romanian factories, where labour costs allow the company to compete with Asian production.

Campagnolo’s so-called Rev 11+ technology that guided the recent overhaul of Chorus, Record and Super Record derailleurs was used to inform the geometry of Potenza derailleurs to improve the quality of shifting.

The front derailleur has a longer arm (or rod) for extra leverage that improves performance under heavy loads. The design of the steel cage also adds to the performance of the derailleur in the form of strategic contours that are designed to guide the chain during up- and down-shifts.

The front derailleur cage has been widened compared to previous designs in order to eliminate the noise associated with cross-chaining and the need for trimming while using the big ring. The cage is now positioned a little further behind the seat tube in order to contend with the chain angle associated with the new 32T rear cog. The geometry of the Potenza rear derailleur features Campagnolo’s “embrace technology” that provides extra chain wrap for the rear cogs. According to the company, this technology increases power transfer while reducing the wear rate of the transmission.

There are two versions of the Potenza rear derailleur. Buyers that want to use a 32T rear cog will need the medium cage version, while the short cage will continue to suit cog sizes up to 29T.

While the front derailleur is constructed from steel (cage) and aluminium the rear derailleur makes use of a “lightweight technopolymer” for the upper and lower bodies. The plates are made from aluminium while the limit screws have been moved from the outer plate to the rear of the upper body.

At face value, Potenza’s Ergopower levers resemble current Athena levers with the same alloy blades and EPS-inspired thumb button. However, the lever body has been re-modeled to improve compatibility with current handlebar designs and new hoods have been added. In addition, a larger index bushing with a new shifting sequence has been added to the left hand lever that has trickled down from Campagnolo’s racing groupsets. This shifting sequence makes the most of the new front derailleur design to provide a claimed 50% increase in the precision of upshifting when compared to the outgoing Athena design. The upshift now comprises three clicks — the first two provide trim positions for the small chainrings while the third completes the shift to the big ring.

By contrast, the function of the right-hand shift lever and thumb button remains unchanged. The upshift lever offers multiple upshifts (up to three gears) while the thumb button is limited to a single downshift every time it is pressed. Potenza’s brake calipers continue, front and rear, with Campagnolo’s dual-pivot skeleton design that was introduced for the racing groupsets almost 10 years ago. Also unchanged is the quick-release mechanism, which resides in the lever (as a sliding button) but there is a new brake pad compound that offers better all-weather performance.

Potenza’s 11-speed transmission is built around a new forged aluminium crankset with hollow arms that uses the same four-arm spider design as Chorus, Record and Super Record cranks. The new design allows owners to fit compact (50/34T), semi-compact (52/36T), and standard (53/39T) chainrings to the same crankset. And according to Campagnolo’s testing, the design provides a significant increase in rigidity over the previous five-bolt design.

As a Power Torque crank, Potenza is compatible with all of Campagnolo’s exisiting Power Torque bottom bracket cups that suit a variety of formats (BSA threaded, ITA threaded, BB86, BB30, BB30A, PF30, BB386). The right-hand bearing is mounted on the steel axle of the crank while the left-hand bearing is fitted to the cup. A single tool (10mm allen key) is all that is required to install (and remove) the new crankset. According to Campagnolo, Potenza weighs 2,303g, giving up a handful of grams to Shimano’s Ultegra groupset, as shown in the table below: Campagnolo advises that a Potenza groupset equipped with a 12-27 cassette will have a suggested retail price of €852 compared to €904 with an 11-32 cassette (and mid-cage rear derailleur). Pricing for other markets has yet to be determined.

OUT ON THE ROAD

Campagnolo had a fleet of Sarto Asola bikes fitted with Potenza on hand to give all of the journalists at the press camp a chance to experience the new groupset. All of the bikes were equipped with compact cranksets (50/34T), 11-32 cassettes, and medium cages rear derailleurs.

A 36 mile loop served as the testing ground for the introductory ride, hugging the coastal cliffs of Gran Canaria before heading inland for a 12 mile ascent. This road started with a very gentle slope that increased gradually, such that some of the final ramps offered short pitches that exceeded 20%. Needless to say, the 32T rear cog was embraced during those moments. Potenza offers an option for an 11-32 cassette in combination with a mid-cage rear derailleur.

While the three-hour ride was too short to fully assess the performance of the Potenza groupset, it was long enough for me to form some strong initial impressions.

Overall, I found Potenza was a sound performer that offers buyers many of the hallmarks that distinguish Campagnolo’s more expensive racing groupsets. The shifting action was light and precise with clearly defined clicks that could be felt and heard. Braking too, was familiar, combining Campagnolo’s gentle braking curve with the force of dual-pivot callipers to provide plenty of grab on the rims when needed.

As a long-term user of Campagnolo’s racing groupsets, I really felt the absence of multiple downshifts for the rear derailleur. Indeed, I found myself holding the right thumb button for an extra downshift or two on multiple occasions, such is the extent of my conditioning. Nevertheless, I enjoyed the EPS-like thumb button, which is easier to activate from the drops than Campagnolo’s multi-shift thumb button.

Given the nature of the terrain, I didn’t perform many changes for the front chainrings, but my impression was that it was quick, quiet and efficient. Does it match the quality of shifting of Campagnolo’s current racing groupsets? Not quite, but it’s very close.

In today’s competitive market, there’s no such thing as a bad groupset. All of the major manufacturers have managed to develop great products that not only work well, but also offer distinctive touches. Campagnolo’s Potenza continues this trend, providing mid-range buyers a promising groupset that blends the company’s distinctive touches with an affordable product. All of the demo bikes made use of custom-painted Sarto Asola framesets.

One of Athena’s strongest appeals was that it was the only 11-speed groupset on the market that could be had in a classic silver finish. Campagnolo appears to acknowledge the importance of this with the decision to offer Potenza in a silver finish, but it remains to be seen whether the new four-bolt crankset will have the same appeal as the classic five-bolt design of Athena. At least there are tangible improvements in shift performance to capture the interest of buyers.

Shimano’s Ultegra groupset is both widely known and widely available, so Campagnolo’s ambitions for Potenza are grand, to say the least. One obvious hurdle will be overcoming the unfamiliarity of consumers; another is perceived value.

When placed side by side, Ultegra doesn’t look as far removed from Dura Ace as Potenza does from Record or Super Record. And according to Campagnolo’s groupset hierarchy, Potenza is fourth in line (and the company’s lowest-priced 11-speed groupset) compared to Ultegra’s second-tier placing in Shimano’s catalogue. As such, there is a risk that shoppers will simply assume that Ultegra is a higher quality product than Potenza.

I’ve not spent enough time with Potenza to decide a contest with Ultegra, but based on my initial impressions, I don’t see much to separate on the basis of performance. What are more obvious are the distinctions in the aesthetics, execution, and feel of the two groupsets, all aspects that are best left in the hands of personal preference. This article was originally published on our sister website cyclingtips.com