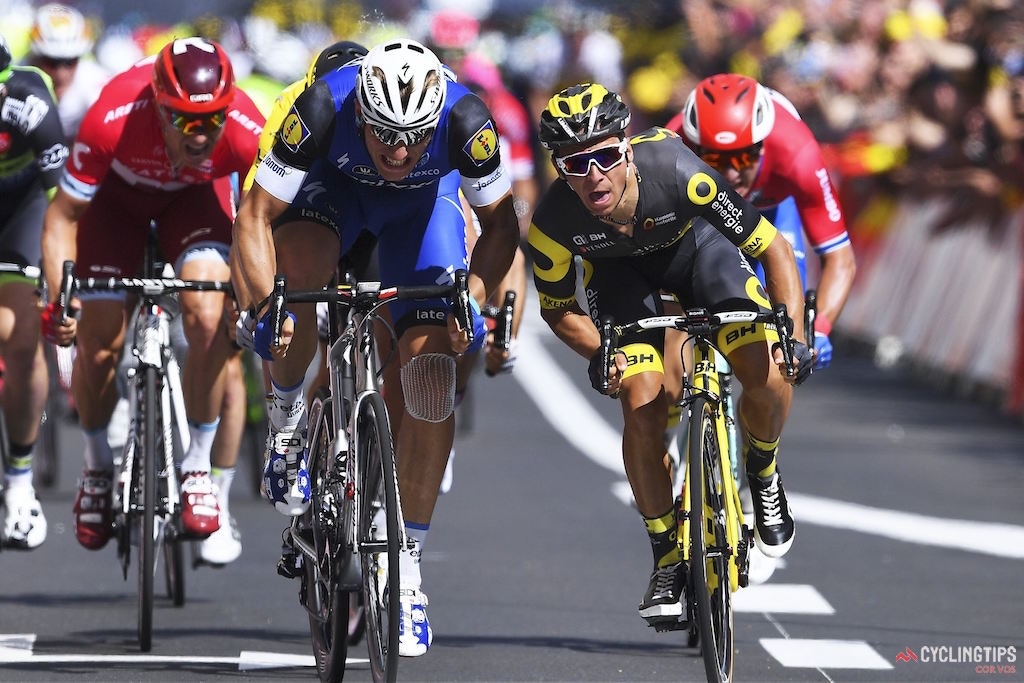 The battle of the Tour de France sprinters continued Tuesday in Limoges, and this time it was German Marcel Kittel (Eitxx-QuickStep) registering the stage win, taking a photo-finish victory ahead of France’s Bryan Coquard (Direct Energie).

The margin of victory was even closer than the Stage 3 photo-finish by Mark Cavendish (Dimension Data) ahead of Andre Greipel (Lotto-Soudal), and was contested by two different men, showing the depth of sprinters at this year’s race.

The narrow victory for Kittel was his first since July 27, 2014, on the Champs Elysees in Paris, as he missed last year’s race. The win brings his total of Tour stage wins to nine.

“I felt super proud, and so happy,” Kittel said. “After missing out on the Tour last year, changing teams… the expectations were very high. We came with the goal to win on the first stage but we missed out on the yellow jersey. We were disappointed, but the team remained focused. I felt the pressure, that also explains the emotion.”

A tough uncategorized uphill drag in the final seven kilometers proved to be the undoing of both the day’s breakaway and Cavendish; the two-time stage winner at this Tour slid far back in the peloton and was unable to recover position in time for the finish.

Greipel looked to be in prime position to take the stage win, entering the final kilometre in third wheel behind two teammates, but faded in the final and finished outside the top 10.

Alexander Kristoff (Katusha) opened the sprint for the line, but faded in the end, finishing fifth.

Peter Sagan (Tinkoff) continued his run of finishing inside the top-5 on every stage of this year’s Tour, finishing third on the day and garnering bonus seconds to extend his lead in the general classification to 12 seconds over Julian Alaphilippe (Etixx-QuickStep). Sagan also leads the points competition, with 147 points to Cavendish’s 142.

“I’m very happy. I lead the points classification and I still have the yellow jersey — this Tour is going very well for me,” Sagan said. “Today’s finish was good for me but I started sprinting too early. Kittel was stronger and Coquard was very smart. He waited for the last moment and he was so close to winning.”

Alaphillipe retains the white jersey as Best Young Rider, while Belgian Jasper Stuyven (Trek-Segafredo) continues in the polka-dot jersey as King of the Mountains.

The longest stage of the 2016 Tour traveled 237.5km (147.6mi) from Saumur to Limoges — the site of a poignant moment in Tour history. Twenty-one years ago, the 1995 Tour finished in Limoges and the stage winner was Lance Armstrong. Armstrong pointed towards the sky as he crossed the finish line, dedicating the win to his teammate Fabio Casartelli, who had tragically crashed on the descent of the Col de Portet d’Aspet and died days earlier.

For the first time in this year’s Tour, the breakaway did not establish directly at the beginning of the stage. It took nearly 30 kilometres before four riders found themselves with a significant advantage.

Alexis Gougeard (AG2R-La Mondiale), Markel Irizar (Trek-Segafredo), Oliver Naesen (IAM Cycling) and Andreas Schillinger (Bora-Argon18) formed the day’s escape. The quartet built themselves a maximum lead of 6:20 before the teams of the sprinters began contributing to the chase in the peloton.

About 20 riders had brief moment of panic as a split in the peloton occurred when the riders entered a crosswind section shortly after the feed zone with 112km to go. The crosswinds didn’t last long, and the peloton came back together.

Schillinger took the intermediate sprint with 67.5km to go, while Sagan brought the peloton across the line a few minutes later followed by Kittel and Cavendish. The intermediate sprint has served as a half-speed hors d’oeuvre for the sprint finish, though the outcome would be quite different. Under 40km to the finish, the sprinter’s teams had the breakaway’s lead pegged at one minute and Gourgeard dropped out of the group and back into the peloton.

“I thought we were on for the same stage as yesterday but the sprinters’ teams pushed hard very early,” Naesen said. “Our team asked us to try to get in the breakaway and I got at the front of the race. It was incredible. There’s so many people on the roadside… And they are very enthusiastic. I hoped we would make it to the finish, you never know, even if those breakaways end up to be overtaken 95% of the time. I felt I was stronger than my companions. That’s a pity.”

The uncategorized climb with 7km to go brought the leading trio back into the bunch with Team Sky and Tinkoff present at the front of the bunch. The green jersey of Cavendish was seen far back in the peloton at this point.

Under the red kite, Greipel had two teammates in front of him and looked set to unleash his sprint and take the win.

A brief slowing of pace in the final few hundred metres created a reshuffling and saw many riders come to the fore in hopes of taking the win.

Kittel charged towards the line as Coquard surged along the German’s lefthand side. For a moment, it looked as though the Frenchman might pass Kittel, so great was his acceleration, but it was not to be. Kittel captured the stage win by perhaps a centimetre. With the win, Kittel became the first rider of 2016 to win a stage at two different Grand Tours.

“I really believed in my chances,” Coquard said. “I could see I was making it back but it was not enough. I’m very disappointed but I must not give up. There are still lots of chances left. I’m glad that we took things into our own hands. I think I belong with the greats now. There is no mistake in the sprints, the stronger wins. I was never as close to victory but I haven’t won yet. I’m young, but I’m a winner. I have the temperament and I want to win this year at the Tour.” The Tour de France continues Wednesday with the fifth stage traveling 216km from Limoges to Le Lioran. It is again a slightly uphill finish, but a category 3 climb comes in the final 10km of the stage, appearing on paper a finish tailor-made for Sagan’s abilities.