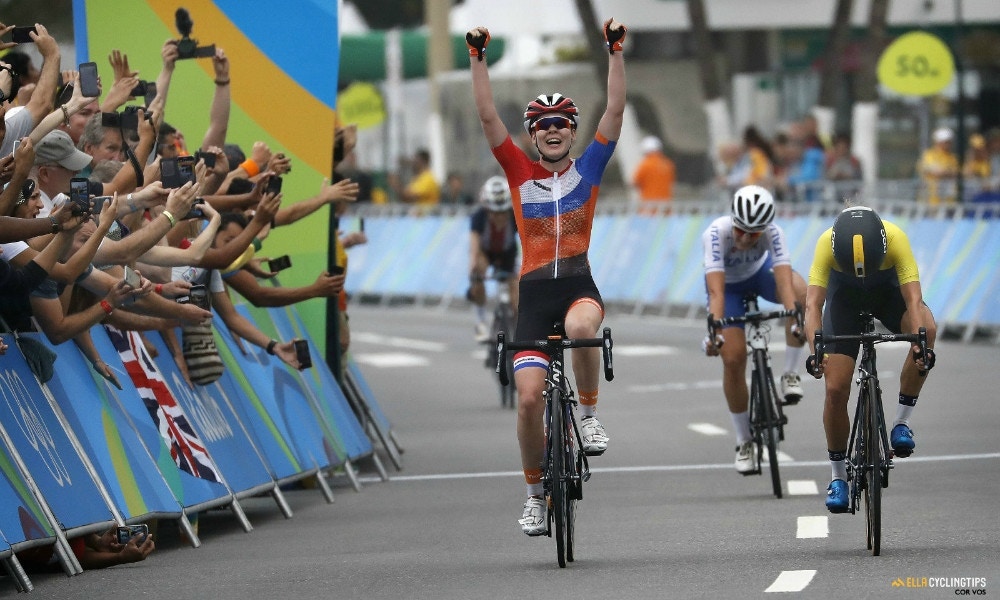 While the lead-up to the women’s Olympic road race was somewhat tainted by all the commotion surrounding the three missed doping tests of world champion and top favourite Lizzie Armitstead (Boels-Dolmans, GB), the race itself did not disappoint.

“I purposely restrained myself in the last two kilometers because Emma Johansson is very quick. I gambled. When I saw the 150 meters sign I knew I had to go because my sprint isn’t fast enough to wait any longer,” said Van der Breggen.

HOW THE RACE UNFOLDED A cautious first half

At 12.15 p.m. local time, 68 women set off for a race one of the most challenging road race courses the Olympics have ever seen. The 136- kilometre race consisted of two circuits which included several steep climbs and a two-kilometre cobbles section the peloton would traverse multiple times. In all accounts, the race would be determined on the final climb, either up it or down the dangerous descend.

Knowing what was in store, the race started off cautiously with only one youngster daring to make an early move while others preserved their legs.

It was 20-year-old Belgian rider Lotte Kopecky who put in a courageous effort, attacking into the crosswinds and soloing off the front for almost half the race. Germany’s Romy Kasper (Boels-Dolmans) tried to bridge over but she got swallowed up by the peloton on the Grumari climb, 45 kilometres into the race.

Emma Pooley (GB) was active all race, covering attacking and chasing down breakaways.

Super domestique Ellen van Dijk (Boels-Dolmans, The Netherlands) attacked and pulled a small but strong group of riders along with her including Trixi Worrack (Canyon-SRAM, Germany), Anna Plichta (BTC City Ljubljana, Poland), Giorgia Bronzini (Wiggle-High5, Italy) and Kristin Armstring (Twenty16-RideBiker, USA). While Kopecky remained off the front, Great Britain’s Emma Pooley (Lotto-Belisol) led the chase to Van Dijk’s group. Pooley then launched an attack herself which saw Australia’s Gracie Elvin (Orica-AIS) respond as well as Marianne Vos. The trio looked promising but Vos sat up, making it clear that today, the Dutch would not be working for her but for climber Anna van der Breggen instead.

Only Kopecky was left dangling out in front when the peloton cleared the cobblestones a second time but she too would get reeled in atop of the Grumari climb.

The peloton strung out on the descend and just before exiting the Grumaro circuit, France’s Audrey Cordon (Wiggle-High5) decided to test her chances, attacking solo and prompting a response from the pack.

Action before the climb

All back together, it was time to fuel up and while Vos busied herself with collecting bottles for her team, she would soon find herself in a potentially race-winning move when she and seven other riders got away and reached the second circuit ahead of every one else.

It had been Germany’s Worrack who initiated the attack on the flat, windy section along the beach, and she was soon joined by Vos as well as Elvin, Elena Cecchini (Canyon-SRAM, Italy), Anisha Vekemans (Lotto-Soudal, Belgium), Malgorzata Jasinska (Ale Cipollini, Poland) and Pauline Ferrand-Prevot (Rabo-Liv, France).

Interestingly, the peloton allowed this dangerous break to get away despite Team USA and Team GB being left out. Without much responsse from the pack, the break worked hard and extended their lead up to 1:17. At the start of the Vista Chinesa climb, the break still had over a minute gap on the pack but the climbers like Mara Abbott (Wiggle-High5, USA), Evie Stevens (Boels-Dolmans, USA) and Ashleigh Moolman-Pasio (Bigla, South Africa) were now moving to the front.

With grades up to 19 %, the ascent proved to be as devastating as anticipated, and soon Abbott –a two-time Giro Rosa winner and considered the best climber in the world –surpassed the breakaway riders and climbed on ahead while other favourites were dropping off the back including Megan Guarnier (Boels-Dolmans, USA), Vos and Armitstead.

While Van der Breggen was favoured to win, it was time trial specialist Van Vleuten who outclimbed her compatriot and everyone else on the second part of the Vista Chinesa, even distancing Abbott.

A better descender of the two, Van Vleuten took her chances on the extremely dangerous descend, which saw Vincenzo Nibali crash out of a winning position the previous day in the men’s race.

Van Vleuten descended down the narrow, twisty road so quickly that the motorbikes lost sight of her briefly. Meanwhile, Abbott was not far behind. The next image we saw of Van Vleuten was her crashing horrifically around one of the corners.

With a trio of Van der Breggen, Johansson and Longo Borghini behind her, Abbott pressed on as the solo leader, riding what would become the TT of her life as Olympic gold was now in sight.

With 6 kilometres to go, Abbott was leading the chasing trio by 35 seconds. Behind them, another chase group formed with Armitstead among them.

As Abbott’s lead was decreasing so were the kilometers ahead. With the finish in sight, Abbott’s dreams were scattered as the trio came flying by her in the final kilometre.

Van der Breggen opened up her sprint really early, and successfully held off Johansson who would win her second Olympic silver medal. Bronze went to Longo-Borghini and nothing but heartbreak was left for Abbott who had gotten so close. Annemiek van Vleuten on the attack before the treacherous descend.

“We saw Annemiek lie there and it did not look good,” said Van der Breggen in a team statement. “It took a while before I could switch [back to racing]. Only when Emma Johansson said, “Let’s do it for Annemiek’ I was able to turn the switch. ”

Vos too was shocked when she passed a motionless Van Vleuten on the descend.

“It was really scary. The reaction of the people surrounding her was not good. But you can do nothing,” said Vos.

Van Vleuten was transported by ambulance to the hospital. She was conscious and talking but that’s all we know for now. We will update the report as more details become available.

In only three days, 24 women of today’s peloton will take to the start of the Olympic individual time trial – including freshly crowned Olympic road champion Anna van der Breggen.

The time trial consists of a 29.8 kilometer race over the Grumari circuit, which has featured in the road race too. Come back tomorrow for an extensive preview of the women’s Olympic time trial.