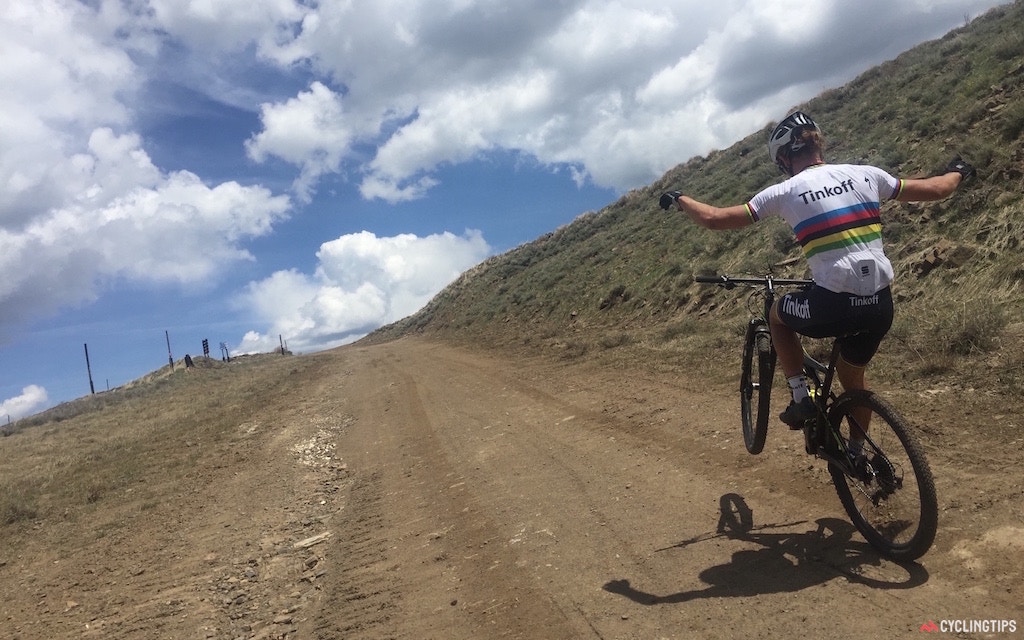 And they would know. Between them, Absalon and Schurter have nine elite world championship titles, 10 World Cup series titles, two Olympic gold medals, a silver, and a bronze.

Schurter (Scott-Odlo) has been world champion four times over the past seven years, with two silver medals over the same span. He’s yet to take Olympic gold, settling for silver in London behind Jaroslav Kulhavy (Specialized).

Absalon (BMC Racing) took a fifth world title, ahead of Schurter, in 2014. He flatted out of the London Olympic race, putting an end to his streak of two consecutive Olympic gold medals dating back to 2004 in Athens.

Schurter currently leads the 2016 World Cup standings, ahead of Absalon, having won two of three events; Absalon won the other.

Simply put, Absalon, 35, and Schurter, 30, are the Federer and Djokovic of cross-country mountain biking — the greatest of all time and the greatest of his era, with intersecting career arcs that have provided one of the greatest rivalries in all of cycling.

Sagan’s road credentials are unquestionable — he’s the current world road champion, Tour of Flanders winner, and four-time green jersey at the Tour de France. He’s renowned for his bike-handling skills, and that, combined with his sheer strength, merited him to a silver medal a the 2008 junior world cyclocross championship, followed by a world junior title in cross-country mountain-bike racing the same year. Since then, he’s pursued a road career, dabbling in mountain biking on the side.

Simply put, Sagan is a phenom. His combination of strength and fluidity has made him one of the best cyclists in the world — perhaps ever.

Yet when it comes to Sagan’s unconventional decision to race the Olympic mountain-bike event — to step into the sport at its highest level — just four weeks after the Tour de France, both men are skeptical of his chances at medaling.

Citing a lack of race experience, as well as a lack of UCI points that will see Sagan start near the back of the field, Schurter said he does not expect Sagan to influence the race.

“Sagan is a great addition to our Olympic race and will give huge attention to this already important event,” Schurter told CyclingTips. “He sure has a great talent for being an excellent mountain biker — he proved this in his early career. But despite this fact, he has a huge lack of experience over the past years and he has to start in the very back. I don’t think he will have anything to do with the outcome of the race.”

Absalon agreed, but was slightly more diplomatic about Sagan’s chances.

“It’s great to see that despite his success on the road, Sagan is still very passionate about his first cycling discipline,” the Frenchman told CyclingTips.. “It looks like he still rides his mountain bike regularly, and has fun riding off-road. I think he will feel a big lack of race rhythm, but it’s definitely going to be interesting to have him there and to see what he can achieve.”

A lack of race rhythm was a common theme among top-level mountain bikers. Italian Marco Fontana, a bronze medalist at the 2012 Olympics and 2014 world championship, told Gazzetta dello Sport that Sagan will be lacking the specific fitness needed to compete among the best.

“Peter will come out of the Tour in great aerobic condition, but in our races it’s rhythm that counts — accelerating, steering, relaunching again. He knows how to handle a bike, but he’ll have to work on intensity. I think he’ll struggle to get in the top three,” Fontana said. “But he’s a phenomenon, we can expect anything from him.”

Fontana described the Rio course as “quite technical, but not one of the most difficult,” adding that the unknown quantities would be “the heat, and the terrain — you risk sliding off on the corners.”

Swiss legend Thomas Frischknecht, the 1996 world champion who now runs Schurter’s Scott-Odlo team, was less optimistic about Sagan’s chances, and was also unimpressed with the maneuvering by the Slovakian Olympic Committee, which put mountain-bike pro Martin Haring in the road race, and as an alternate for the mountain-bike race, leaving Michal Lami out of the conversation.

Lami is currently ranked 32nd in the world, with 738 UCI points. Sagan is ranked 910th, with 25 points, earned via a fourth-place finish, after a puncture, at a Czech Cup event in Teplice, in April.

“Peter Sagan has about the same chances of becoming Olympic mountain bike champion as if Nino would race the road event and go for gold,” Frischknecht said. “Both can show a very respectable performance in their non-specialty discipline, but both of them would not walk away with a medal. Sagan is attracting a lot of attention to the mountain-bike race, which is kind of cool — not so cool is the fact that Lami, who deserves to represent Slovakia at Olympics, is left back in the dust.”

There will 50 starters for the Olympic MTB race, held Sunday, August 21, the final day of the 2016 Games.