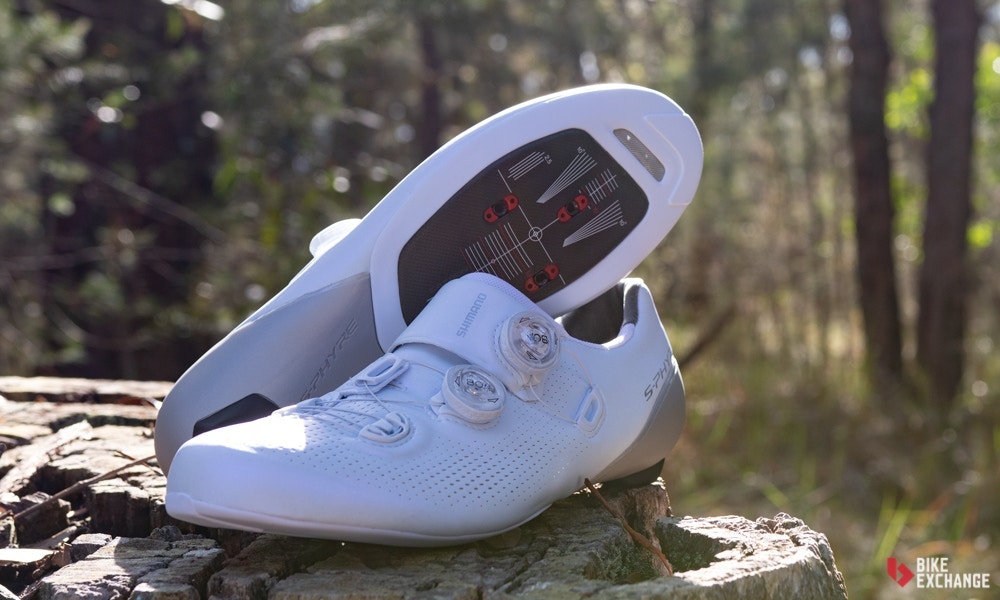 It was exactly two years ago when Shimano introduced its S-Phyre performance clothing range, and with it, major changes to its flagship racing footwear. The first S-Phyre shoes saw Shimano take a more aerodynamic approach to footwear design by offering a sleek and somewhat minimalist aesthetic. Additionally, the new shoes saw a weight reduction, an increase in colour options and most notably, the removal of Shimano’s Custom-Fit heat mouldable technology.

The S-Phyre RC901 is the next generation of the original RC900 (aka RC9), a road racing shoe that simply takes the proven framework of its predecessor and improves on a few small elements. CyclingTips tech writer Dave Rome recently received a pair of the new RC901 to compare against the RC900 he’s previously reviewed. Here he shares his first impressions while working towards an in-depth review for CyclingTips. 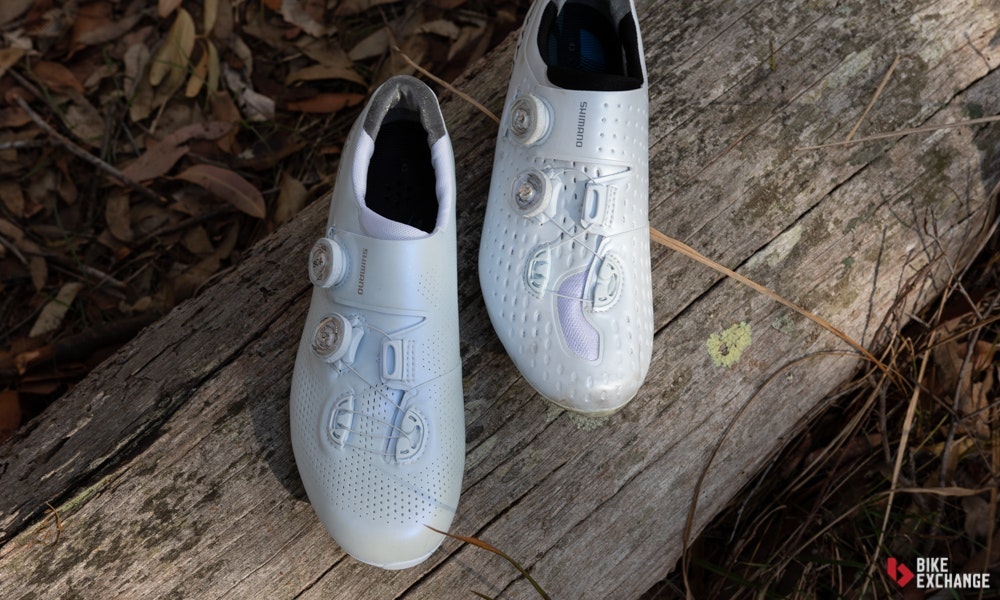 The RC901 is all about improvements in the fit and airflow. Little has changed from a structural sense, and the premium carbon fibre sole still tops Shimano’s stiffness index. Likewise, Shimano has kept with a construction that removes the need for a traditional lasting board to sit between the upper and the sole, in turn, reducing stack height and saving weight. Rome’s EU43 samples weight 512g for the pair, 12 grams heavier than the RC900.

Looking to the upper, the exterior plastic heel cup is still designed to hug the back of the foot and aid in stability, however, Shimano has made the shape a little more forgiving. It’s noticeably less rigid to squeeze, and it’s something Shimano has done to fit with a wider variety of foot shapes. Similarly, generous perforations in the Teijin Avail microfibre synthetic leather at the widest part of the shoe is said to be more forgiving in relieving pressure points and heat expansion often felt at the ball of the foot.

Shimano has also simplified the upper, and where the original RC900 offered a small mesh panel above the toes, the new RC901 keeps the upper intact, without seams and less chance of wrinkling. “The golf ball-like dimpled upper is also gone, and in its place is a smooth surface with noticeably more ventilation holes across the shoe. Shimano did tell me the new shoe is faster in a wind tunnel, but they wouldn’t say by how much.” says Rome. 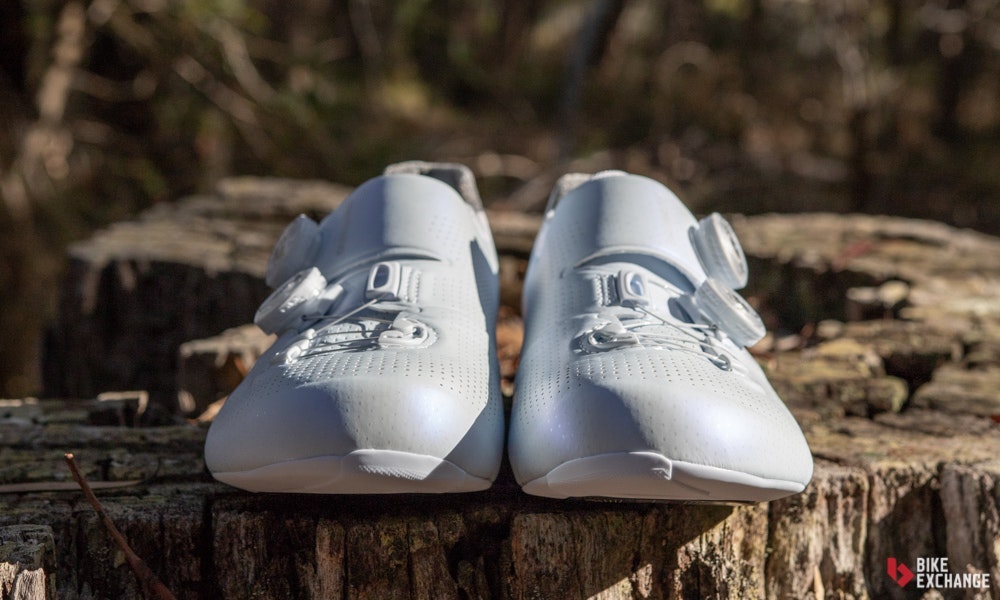 “With so much the same, it shouldn’t come as a too much of a surprise to learn that the new RC901 feels a lot like the RC900 it replaces. And this is a very good thing. The Surround Wrap upper remains, as do the premium micro-adjust Boa dials. All up, the S-Phyre RC901 is a premium race shoe that holds your foot firmly to the pedal, but does so with a high level of comfort.”

“Compared to its predecessor, the changes in fit are extremely subtle. Most noticeable for me is the heel cup which simply feels more comfortable without giving up on security.” The removal of the mesh panel is also favoured by Rome, “Shimano state the mesh panel caused a wrinkle point in the upper, and I can absolutely confirm that this was an issue and that Shimano has fixed it with the RC901”. 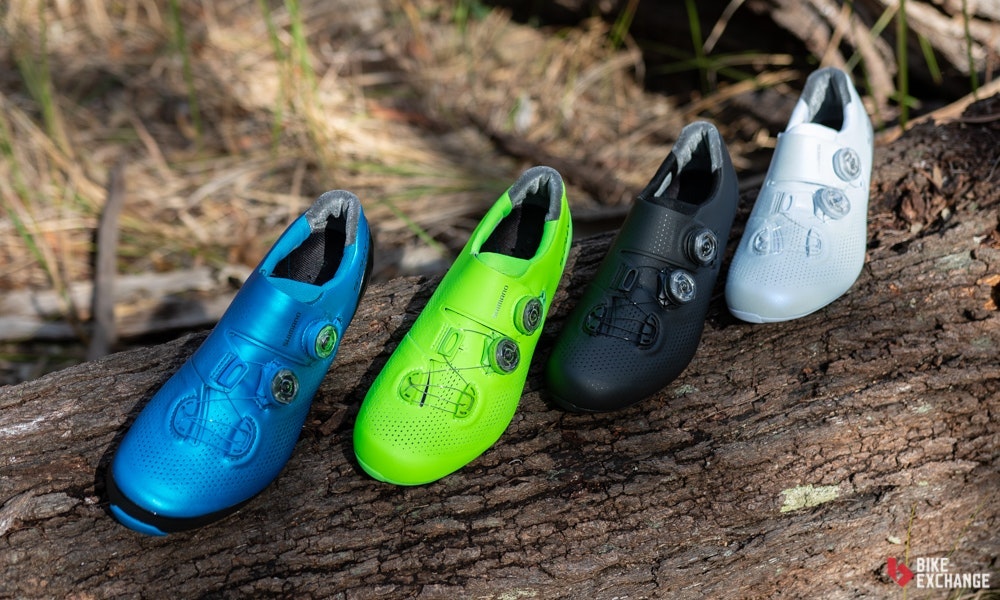 “I really like the smoother aesthetic, it simply looks more like a premium shoe than before.” This premium feel carried over to the colour selection too, with Rome adding “My pearl white sample has a noticeably glittery sheen to it and is certainly more polarising than the simpler pearl white of before.” Shimano also offers the S-Phyre RC901 in black, lime green and metallic blue.

“All signs point to these simply being a better version of the already great RC900. I’m keen to test whether the improved ventilation is noticeable.” Consider us impressed and intrigued to find out more.

Shimano offers the S-Phyre RC901 in both standard and wide fitments from sizes EU36 to EU48. Half sizes are also available between EU37 to EU47.