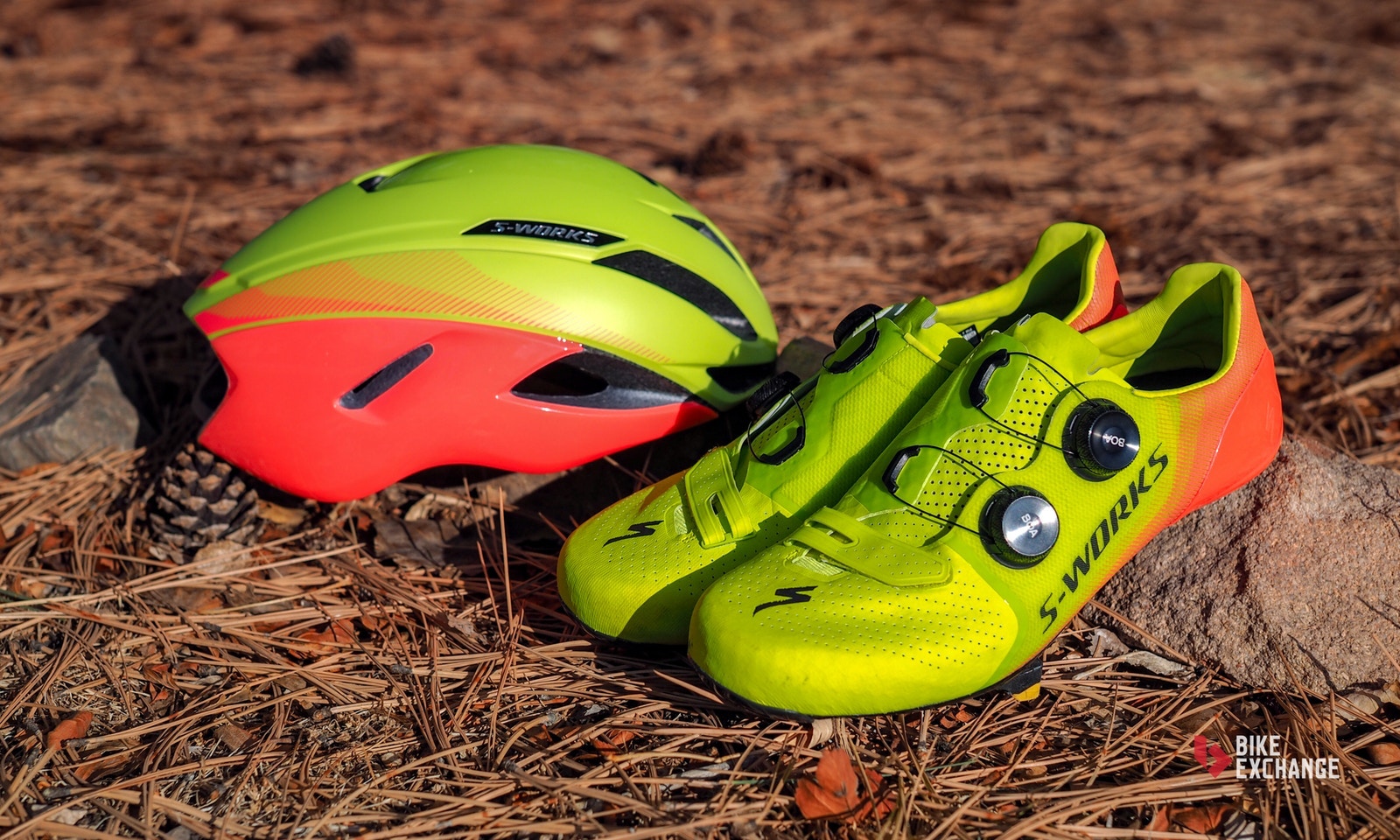 Barely a month into 2018 and Specialized have kicked off with an overhaul of it's popular S-Works level road cycling shoe and given the now 5-year-old Evade aero road helmet a timely update. With refinements on both products being made in all areas, most notably comfort, here are ten things to know about the all-new S-Works Evade II aero helmet and S-Works 7 road cycling shoe.

1. First Seen Down Under 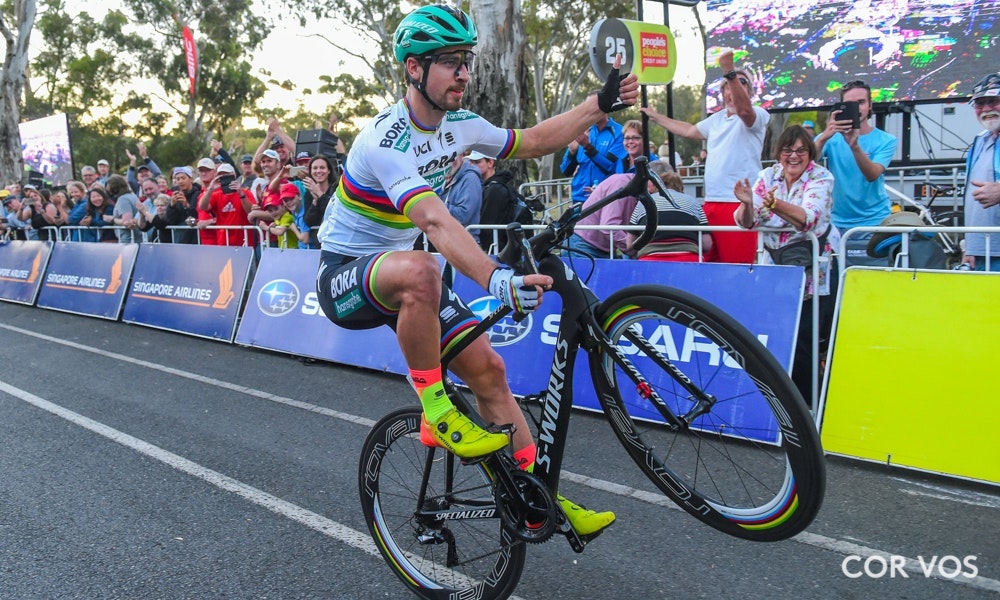 Whilst the S-Works 7 and Evade II officially broke cover on the 9th of February, those with keen eyes will have seen these before on the worlds best. As reported by CyclingTips and numerous others, all Specialized backed teams were seen rocking the new kicks and wind-cheating lids at this years UCI WorldTour opener, the Santos Tour Down Under. 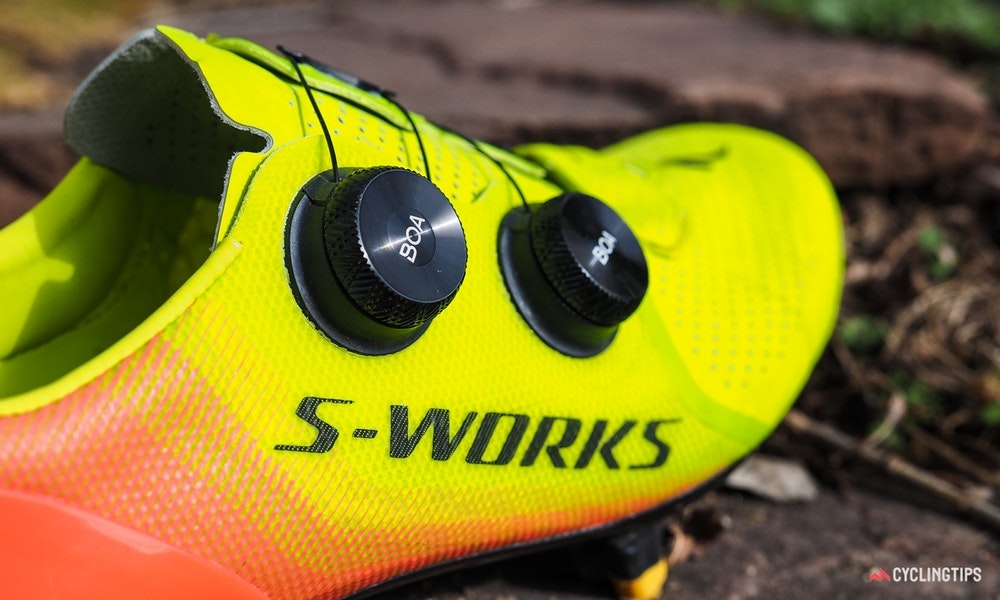 Specialized have partnered with fastening experts BOA to develop the new S3 dial that is used exclusively on the S-Works 7 shoe. The most obvious and notable change from the S2 dials used on the S-Works 6 is the all-new machined, anodized, and laser-etched aluminum cap. Whilst it lends a more premium look to the shoe, the textured edges on the dial itself are also said to provide users with a more secure grip when fastening. According to Specialized, the design is sealed better than other Boa models, with the sturdier internals said to maintain their sound and feel for a longer period of time.

The new S3 dials are not equipped with a quick-release function, rather open guides on the medial side of the shoe let you easily unhook the wire as needed. 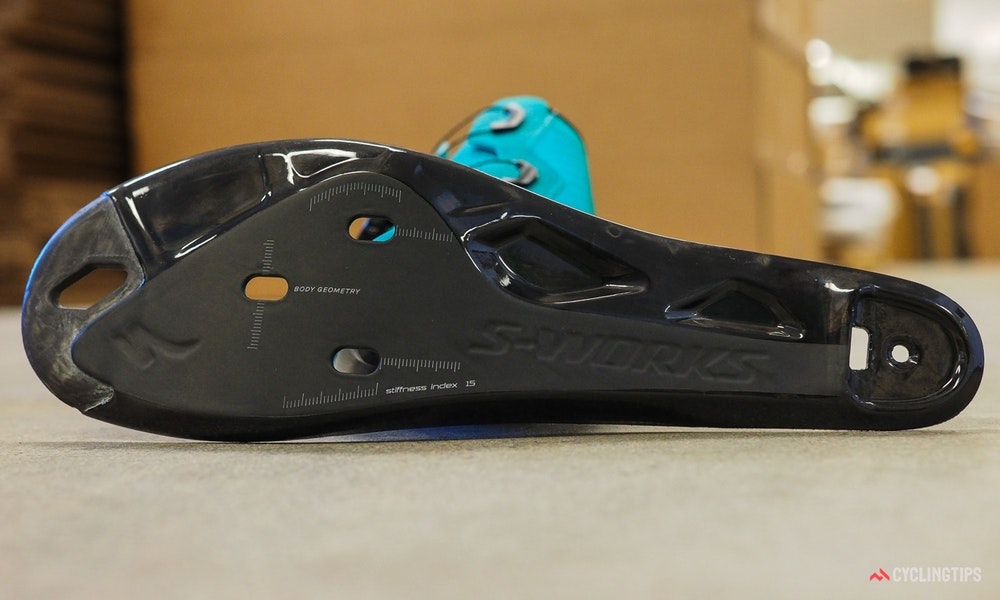 One of the key updates for this new model is the updated carbon fiber outsole. The new sole features what Specialized calls strategically engineered "flex zones" at the outer edge of the plate, which the company claims help relieve hot spots by allowing a small amount of lateral flex, whilst still remaining vertically stiff.

The claimed weight of the new shoes remains the same at 224g per shoe with the size range spanning 36-49 (with half-sizes from 38-47) across three widths.

4. Out of this World Upper 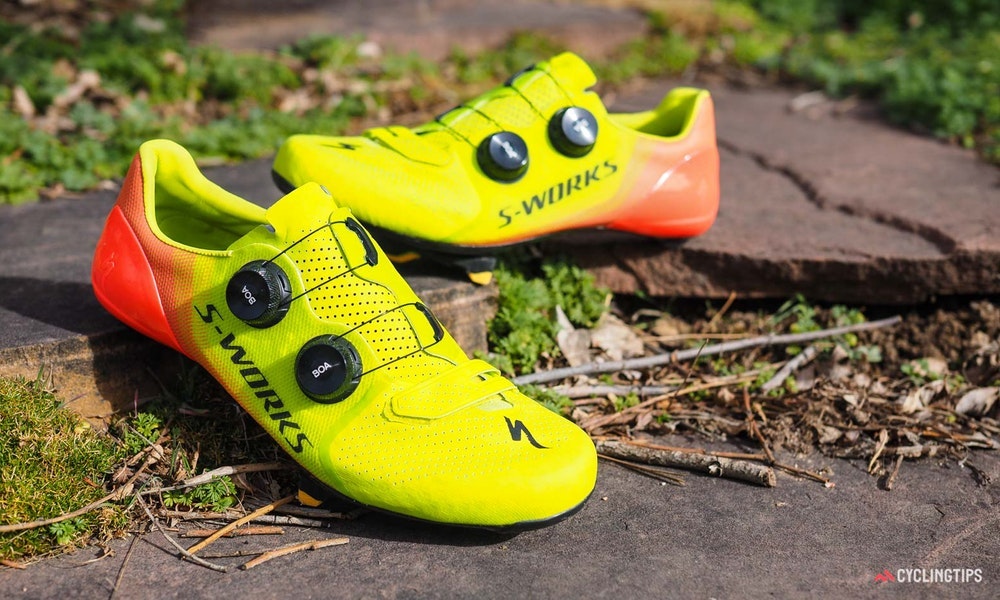 Specialized once again makes use of non-stretch Dyneema fabric on its flagship shoe, but it’s now a mesh construction. Specialized claim this mesh offers a little more stretch for a more conforming fit.

The Dyneema panels around the ankle are said to feel more fabric-like and pliable relative to the S-Works 6. Continuing with the evolution of fit, revised tongue construction and slightly different BOA dial placement are said to provide users with a more secure fit without generating discomfort.

Specialized have relaxed the fit of the PadLock heel on the new S-Works 7 shoes over the outgoing model too, this is said to be on the back of feedback from customers who claimed that the heel hold on the old model was overly strong. 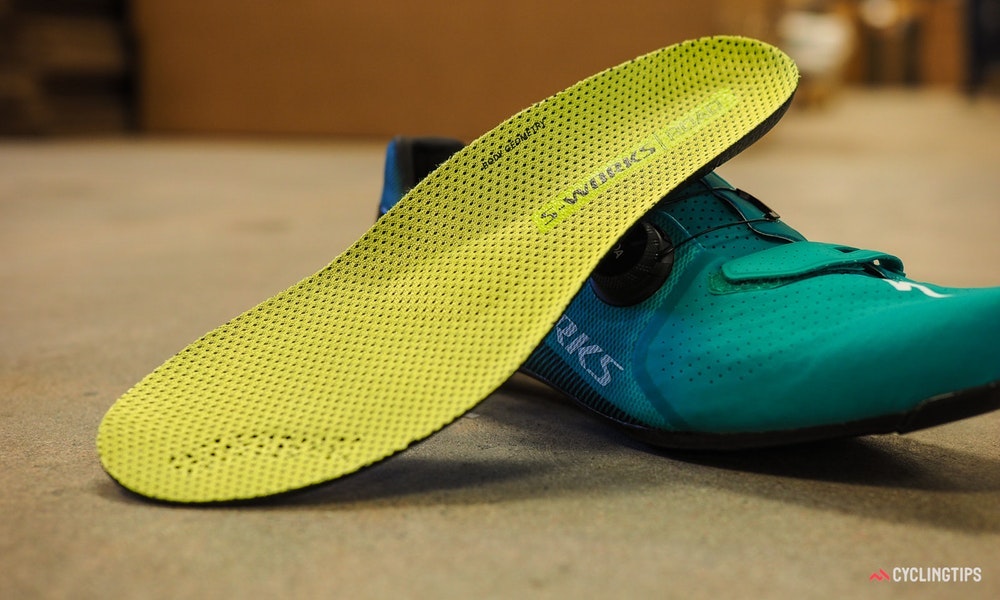 The Body Geometry features that appeared on the ever popular S-Works 6 (and Sub 6) shoes carry over to the new model. This includes an arch support that is built into the carbon fiber sole of the shoe itself and the popular varus wedge, providing additional support to those who need it. 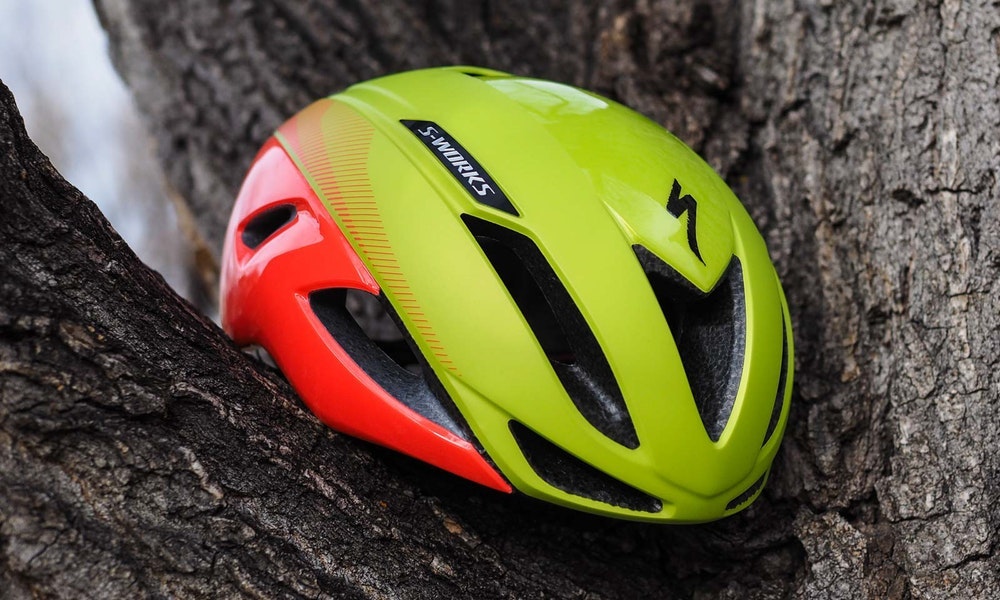 The Evade II’s revised shape is said to have originated from the company's time-trial specific helmet, the S-works TT. The end result is a helmet with more of a rounded and smooth exterior than before, along with 10mm less length on average. Compared to the original Evade, the claimed aerodynamic benefit is six seconds over the course of a 40km-long time trial (when traveling at 40km/h).

7. ...But Not At The Cost of Ventilation 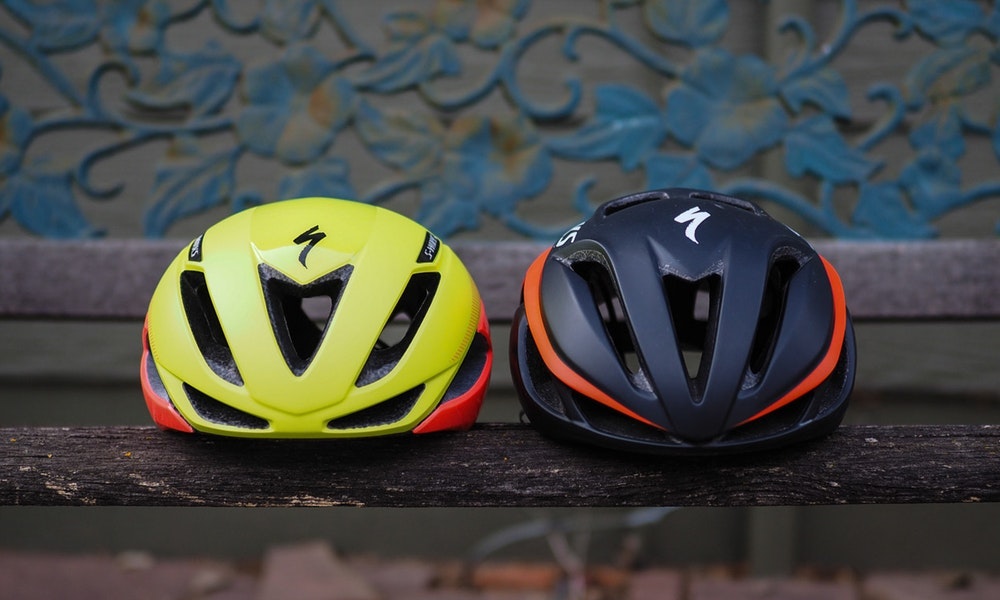 One common criticism of aero helmets is their inability to provide adequate ventilation to the user when traveling at slower speeds. This is one area that Specialized have paid particular attention when designing the Evade II.

The Evade II features five internal air channels (up from three on the previous Evade), with more attention now paid to how air flows along the sides of the head. The gap between the brow pad and forehead has also grown on the new model. This is said to help bring in an increased amount of cooling whilst also keeping the pad drier than if it was stuck directly against the foam. 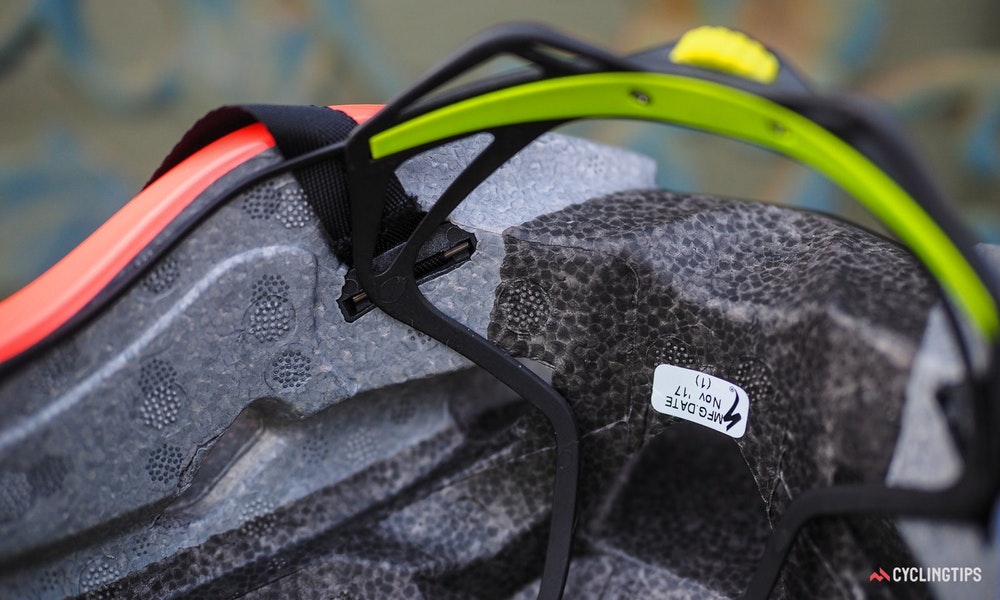 Specialized have changed up manufacturing techniques for 2018, making use of dual density EPS foam in the Evade II's construction. Specialized claim that this not only makes for a closer fit to a rider's head but also maximizes energy dissipation in a crash and relieves weight from the helmet as a whole. The New Evade has a claimed weight of 275g (size small), however, our mates over at CyclingTips claim the new lid is around 10g lighter (in American specification) than the outgoing model.

In addition to updated manufacturing, it's easy to see the dimensions of the helmet have also changed, with the new lids measuring in at two and a half centimeters shorter than the original Evade.

The Evade II also benefits from an updated retention system that is anchored at different points within the EPS liner. The padding is obviously specific to the two helmets, too, but given the similar contact points and surface areas, according to CyclingTips, even that aspect feels similar.

Color options for the S-Works 7 include; Black, White, and a show-stopping Acid/Lava

Color options for the Evade II helmet include the same options.

The S-Works 7 shoes are available in the US right now and carry an MSRP of $400. The S-Works Evade helmet is also available at your local retail shop and is priced at $250.

Looking for even more information? Head on over to CyclingTips to check out their first-hand reviews of both the Evade II helmet and S-Works 7 shoes