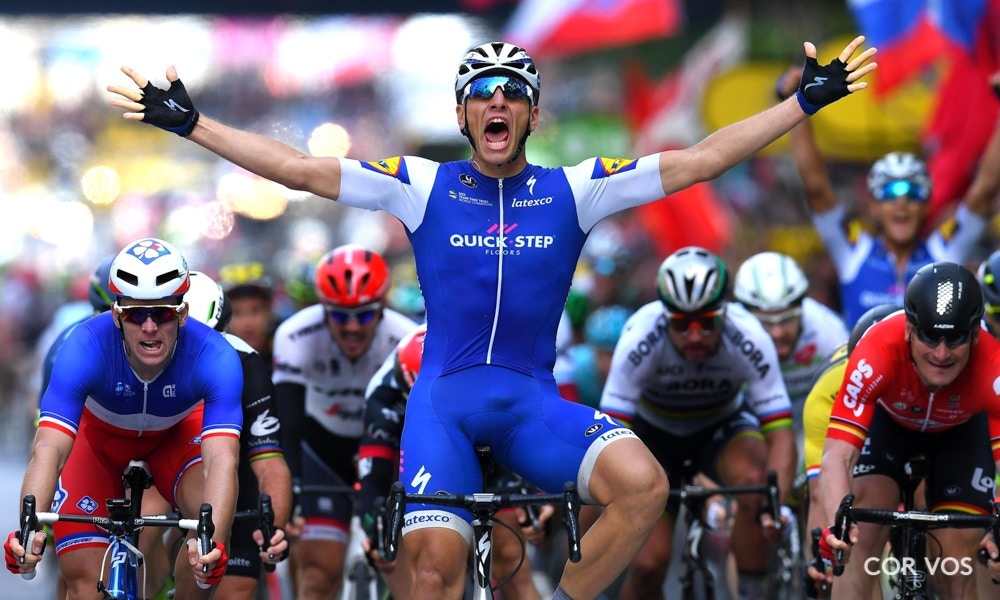 Though the victory marks Kittel’s tenth Tour de France stage win, emotions ran high after he crossed the line, as the German sobbed, his head in his hands. 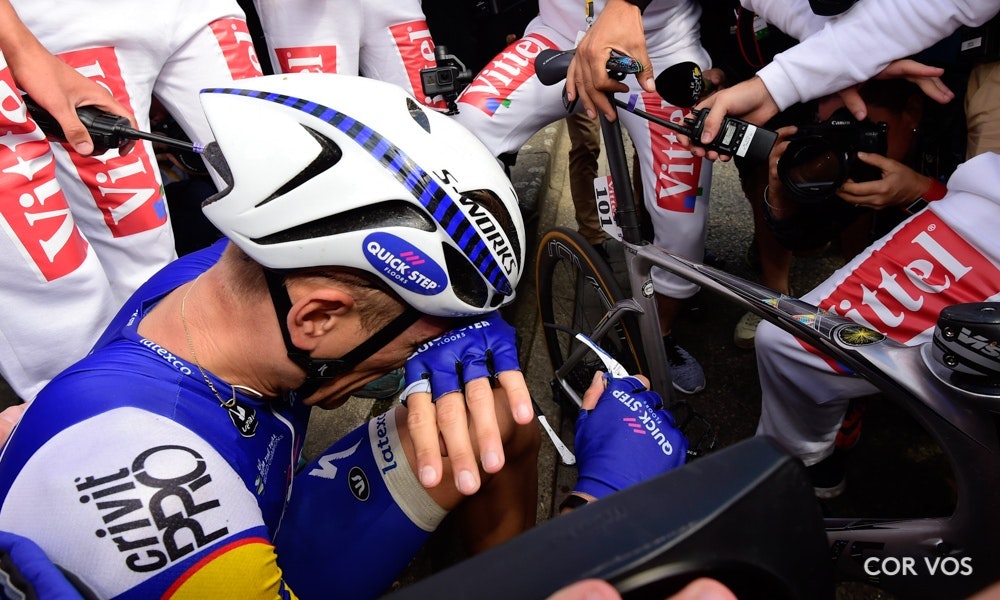 “I don’t know what to say, I am so happy to get this victory,” Kittel said. “It was incredible to start in Germany, there were so many people cheering. It would be wrong to say I had no expectations or no pressure today. I really wanted to have this win. It was for me a big goal to start in Germany and win at the end of this stage.”

The peloton departed Düsseldorf, Germany for a 203km trek south to Liège, Belgium. On paper it looked to be a sprinter’s stage, primarily flat, and like the stage 1 time trial on Saturday, the peloton was met with heavy rain throughout the day.

Eagerly, the breakaway of the day rolled from kilometer one. Four riders made up the breakaway, all riding in their first Tour de France — Frenchmen Laurent Pichon (Fortuneo-Oscaro), Thomas Boudat (Direct Energie), and Yoann Offredo (Wanty Groupe-Gobert), and American Taylor Phinney (Cannondale-Drapac).

The four riders had their work cut out, pushing headwinds and heavy rain for the entirety of their journey. The peloton was slow to react, and by kilometer 15, the gap was over three minutes. Phinney was first over the first undulation of the day, the Grafenberg, giving him the virtual King of the Mountains jersey. Boudat took the first intermediate sprint at 82.5 kilometers, but after Phinney’s high placing on the stage 1 time trial, he also held the virtual green jersey on the road. 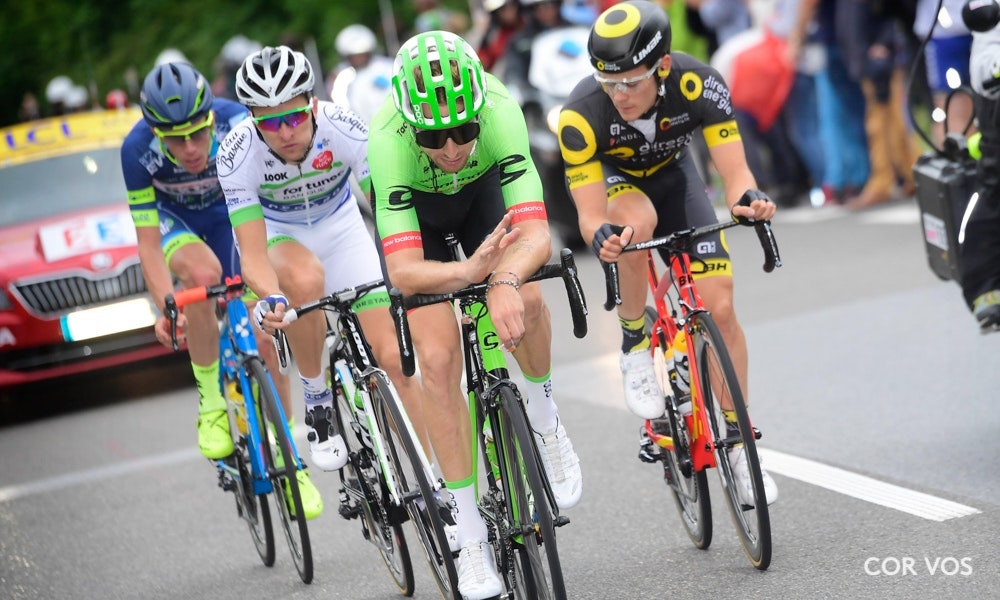 Luke Durbridge, victim of a Stage 1 crash, abandoned early in the stage with ligament damage in his ankle.

The wet roads that caused so many crashes on Saturday added a dangerous element to Sunday’s race. At 30 km to go, a crash at the front of the field was caused when a Katusha-Alpecin rider, sitting fourth wheel, lost grip through a wet roundabout. Those affected included Chris Froome (Team Sky), Romain Bardet (AG2R La Mondiale) and Richie Porte (BMC Racing), the first-, second-, and fourth-place finishers of last year’s Tour.

“I came out of the crash okay, but there were a few guys that went down a lot harder,” Porte said. “It was a stressful day. It was the first real stage of the Tour and then you get the rain, then it dries up, and then starts raining again. It was a nice one to come through and it’s nice to get the first crash out of the way and get on with it. Hopefully my knee is okay, I have a little bit of a bang on that, but I’m looking forward to tomorrow.”

Teammates Michal Kwiatkowski and Christian Knees were quick to come to Froome’s aid, and after he was paced back to the field with 24 km remaining, he received a bike change from the Team Sky car.

“We were all in decent position, sitting top 15, and a couple of guys came around and crashed in front of us, so there was nowhere to go,” said Sky’s Geraint Thomas. “Froomey had to change a bike, but physically he’s fine, I think”.

Directly after the crash there was little control at the front of the field. Upon taking the second KOM at Côte d’Olne with 20.5km to go, Phinney — and later Offredo — left the breakaway and made one final push to the line. It looked for awhile as if they had a chance, with their time gap going back up to almost a minute with 14 km left in the stage.

However, as quickly as the margin went up after the crash, it diminished heading into the final. As the kilometers ticked down and the peloton loomed behind the remaining two riders, the roads dried and it looked as if the final would be contested on dry pavement. With a kilometer remaining, Phinney and Offrendo were swept up, and it was anyone’s race.

Kittel’s leadout was far from perfect, and he was forced to come from far back to blast past Démare and Greipel for the win.

“It didn’t go according to the plan — that didn’t work at all,” Kittel said. “I came pretty late. I needed to go my own way, jumping from wheel to wheel, but I made it. It’s wonderful.” 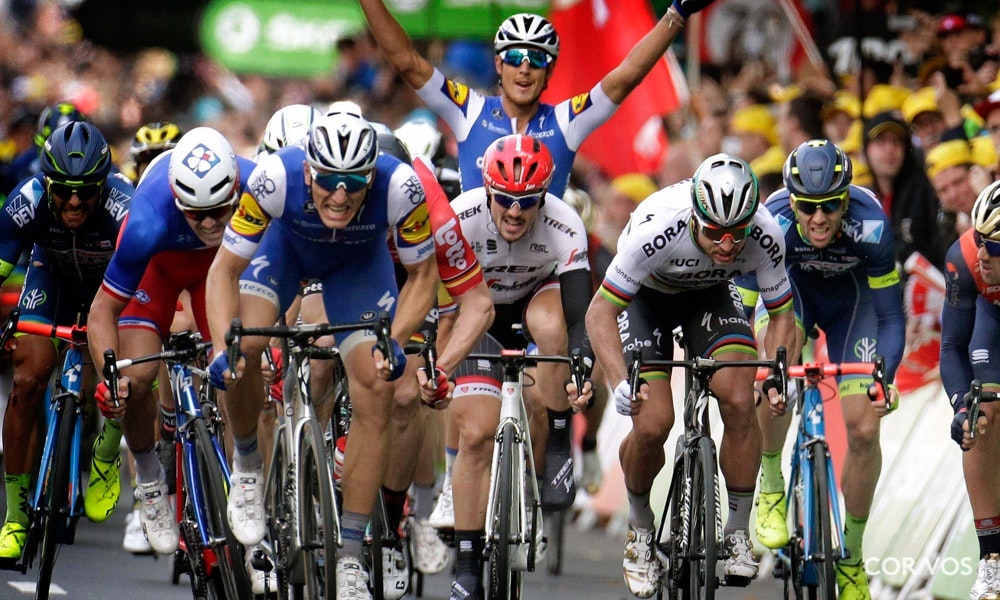 Quick-Step Floors teammate Matteo Trentin had time to celebrate even before Marcel Kittel crossed the line to win Stage 2 in Liège.

Démare could only acknowledge that he’d been beaten by a stronger rider. “I was ideally led out, but then we saw Sagan launch the sprint from the 300 meters and then Marcel Kittel, who came back very strongly from behind with a little bit of luck, and I found myself overtaken.”

Greipel said he could take some solace in how his Lotto-Soudal team had placed him in position.

“As a team we could line up, we were well positioned,” Greipel said. “There was a headwind in the last kilometer and the last 200 meters were slightly uphill. No rider had a teammate ahead of him anymore. Peter Sagan was in the lead too early and held back, and so everyone did. Starting the sprint with 250 meters to go was still too soon, so I had to wait. Kittel was very strong and deserved the win. It is very promising that I was in the mix for the stage win.”

“It was great, just a really special feeling today.” Thomas said. “The weather wasn’t great, but the morale from being in the jersey made that a lot easier.”

After 200 kilometers in the breakaway, Phinney received the polka dot King of the Mountains jersey for his efforts. Offredo was awarded the day’s combativity prize.

“This was the plan this morning,” said Phinney. “To go out and get the KOM jersey. To have a plan work out on the first day of the race is great for the team. It impacts the general flow of things when we start off on a good note.”