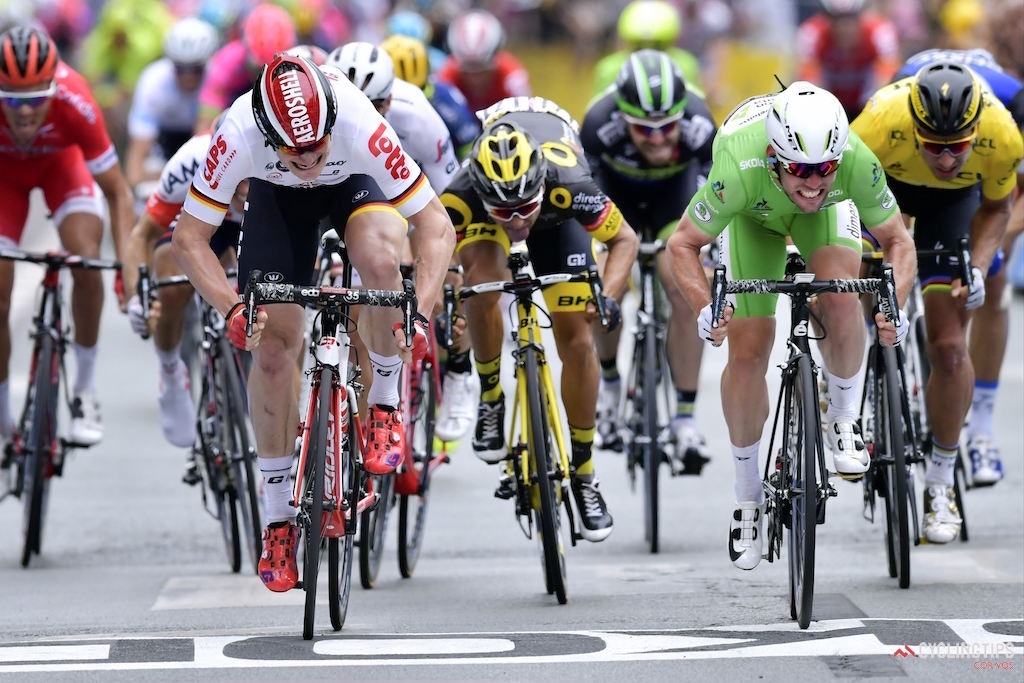 Mark Cavendish (Dimension Data) and Andre Greipel (Lotto-Soudal) went wheel-to-wheel in the final hundred metres on the slight uphill finishing straight in Angers, finishing in a dead-heat. Both riders raised a hand in victory, albeit hesitantly.

Both men would have to wait for five minutes while the Commissaires examined the photo finish and finally awarded the stage to Cavendish. The win however, came as no surprise to Cavendish.

“I normally know when I won or I lose a photo finish,” he said. “When I crossed the line, I kind of knew I got it today but anything can happen. The sprint was uphill, so you had to run into it with speed. I knew I had to come from behind. I wanted to be behind Greipel to launch my sprint. He’s like me last year, after I didn’t win the first stage, I hit out too early. When I started to come past him, I thought I would have it easy, but he hit out again. My teammates, Bernie Eisel, Edvald Boasson Hagen, and Mark Renshaw, were phenomenal. It’s superb for Dimension Data. We came here and we made our sponsors proud.”

“It was a long day,” Sagan said at the finish. “We were just waiting and waiting for the last kilometer. Just stay on the wheel, eat and drink. I’m very happy for yellow. My goal at the Tour de France is to come to Paris in one piece. I’m happy to finish today third, in the yellow jersey, but most important is to be safe and healthy.”

With the stage victory, Cavendish moved into a tie with five-time Tour champion Bernard Hinault for second on the all-time Tour stage wins list with 28. Eddy Merckx holds the record for most Tour stage wins with 34.

How It Played Out

Stage 3 was pancake-flat and traveled 223.5km from Grandville to Angers. On paper the stage looked tailor-made for the sprinters with the winner the last time the Tour finished in Angers in 2004, a sprinter in his early days, Tom Boonen (Etixx-QuickStep).

A sole rider, Armindo Fonseca (Fortuneo-Vital Concept), broke away from the peloton once the riders hit the 0km marker. Fonseco was in for a long lonely ride, but appeared to be enjoying his time in front of the cameras.

While Fonseca only had his thoughts to keep him company up front, the peloton looked to be out for a long recovery spin, with a slight tailwind pushing them along. Riders were seen joking and laughing amongst each other and even the maillot jaune of Sagan came to the front to set a bit of pace-making.

The riders averaged a dismal 33.6kph after four hours of racing with still over 90km to the finish.

Thomas Voeckler (Direct Energie) had enough of the slow pace and attacked with 88km to go. He quickly bridged a gap of more than five minutes to Fonseco and the duo began working together hoping to extend their advantage.

Once Voeckler made the junction to Fonseca, the peloton appeared to wake up a bit and Lotto-Soudal came to the front to inject some pace into the chase, hoping to guide Greipel to victory.

Fonseca rolled through the intermediate sprint first with 53km to go, a consolation prize for his efforts, and the peloton came rambling past less than a minute later.

The top sprinters stretched their legs and had a go at the intermediate sprint both for green jersey points and to open the legs after such a slow day in the saddle.

Inside the final 10 kilometres, the duo was brought back into the peloton by the likes of Etixx-QuickStep and Lotto-Soudal, and thus began the fight for position. Surprisingly, Voeckler was awarded the Most Aggressive Rider prize on the day, despite Fonseca spending over 220km in the lead, most by himself.

Etixx-QuickStep led the peloton under the red kite as the road titled slightly upwards before the final curve 300 metres from the line.

Around the final curve Mark Renshaw (Dimension Data) took the front with Greipel on his wheel and Cavendish locked-in behind “The Gorilla.”

Greipel launched his sprint early, forcing Cavendish to come around him. The rider from the Isle of Man showed his experience on the track, powering alongside the burly German and just pipping him on the line for Tour stage win 28.

“I am incredibly happy with this second win at the Tour de France,” Cavendish said. “We planned it for a long time this morning, we had a long team meeting about how the finish would go and it went pretty much exactly how we planned. It’s good that the guys stayed calm and collected. It would have been easy for them to have pulled and then got out of the way with the hectic final, but they stayed patient. Edvald stayed patient, Mark stayed patient, and then at the right minute I was able to get on Andre Greipel’s wheel. I knew he’d hit it early, actually he was stronger than I thought he’d be. Andre has guts, he rides like that. I actually didn’t beat him in the sprint, I beat him with the lunge. This is another great win for the team but more importantly, it raises the profile of Qhubeka yet again, and that is the reason we are here.”

Greipel was pragmatic in defeat. ““This is such a pity,” he said. “I lost with only a few millimetres difference, Cavendish was just a bit faster. It was a chaotic end of the stage. In the last six to seven kilometres it was difficult to stay together as a team. Anyway, Jürgen Roelandts managed to let me start the sprint in a good position. My gear was too big for the steep finish and that might have made me lose. Nonetheless, Cavendish showed again how strong he is, it would not be wise to underestimate him, this is his 28th stage win at the Tour after all.”

Kittel and Kristoff failed to play a role in the finishing sprint, finishing seventh and 11th respectively.

“We rode full gas from 25 kilometers to go and it was really intense. In the finale, we were there, but we did a mistake by hitting the front too early, so in the closing meters the other guys came very fast from behind and I got boxed in,” Kittel said. “It’s important to learn from mistakes, to remain calm and talk about what happened. The positive side of things is that I feel good and my legs are there. We will try again in the next days.”

Julian Alaphilippe (Etixx-QuickStep) will keep his white jersey of Best Young Rider for another day with Cavendish taking over the lead in the points classification from Sagan.

“Everything went well even though it was a bit boring to ride at this pace all day,” Alaphilippe said. “In the finale, it was rather nervous but I managed to avoid troubles. Unfortunately we didn’t get the win with Marcel Kittel but I’m pretty happy for Cavendish. He already proved at Utah Beach that he is very strong. I’ve had a great time with him last year. I’m pleased to be in the white jersey but I wait for a more undulated terrain like on Wednesday to have a say. I’m not thinking of bringing the white jersey to Paris for now.”

Jasper Stuyven (Trek-Segafredo) keeps the polka-dot jersey as leader of the King of Mountains classification.

The fourth stage from Saumur to Limoges is the longest of the 2016 edition of the race at 237.5km. The finish is again uphill, though a little steeper than stage three’s finish.

Another crash has influenced the hectic final sprint for ORICA-BikeExchange. The fast and technical finish saw Paris-Roubaix champion Matthew Hayman go down on one of the corners with Matthews jumping wheels to try and retain position. Michael Matthews was the best finisher crossing the line in 12th place. Hayman didn't suffer any major injuries and will suit up again tomorrow.

ORICA-BikeExchange currently lead the team classification ahead of Team SKY.

Sport director Matt White praised the efforts of the team but is looking forward to tomorrow’s fourth stage, which is well suited to the strengths of the Australian squad.

“There wont be a day as easy or slow as today throughout the rest of the Tour de France, that’s for sure. It created a very fast and tense finish to the stage and I am pleased that the team all made it through okay.

“We are looking ahead to tomorrow now," continued White. "It is a tough long stage with lots of undulations in the final third. Those are the kind of stages that favour our talents within the team, it’s going to be hard for the pure sprinters with those climbs to contend with.”